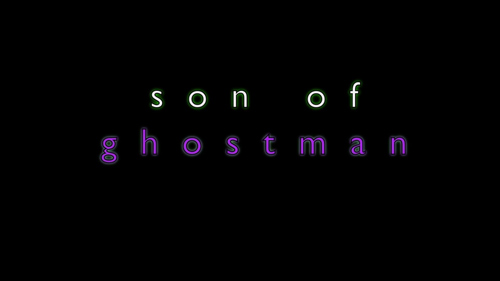 Now this is something special. I occasionally get a bit burnt out be the seemingly endless string of microbudget slasher films that make their way across my desk. It’s not that I can’t appreciate the simple pleasures of machetes tearing into flesh, but since part of the appeal of 80s horror lays in its familiarity, it all starts to get to be a bit exhaustingly repetitive. One of the wonderful things about no-budget film-making is that nobody is telling you what to do. Certainly you’re restricted by budget and available resources, but you’re still able to let your imagination run wild. To experiment wildly. To try things that nobody has ever tried before, simply because you can afford to fail. That so many writers and directors still play it so safe – especially in genre films – is a constant source of disappointment. When all you have is time and creativity, there’s no reason to wade so deeply into the familiar.

Now, Kurt Larson’s SON OF GHOSTMAN is also steeped quite comfortably in nostalgia; not just for the sadly near-extinct tradition of local horror hosts, but also for the romantic cliches and electropop soundtracks of 80s cinema. But it’s still so refreshing to see an obviously low-budget film that trades in the corn syrup and rubber limbs for light comedy and pleasantly goofy characters. While designed as a love-letter to hosts like Zacherley and Ghoulardi, it’s also an effective early-30s coming-of-age story with a John Hughes/Savage Steve Holland-esque sense of sweetness and sincerity. It’s a real triumph, and an obvious labor of love for Larson. 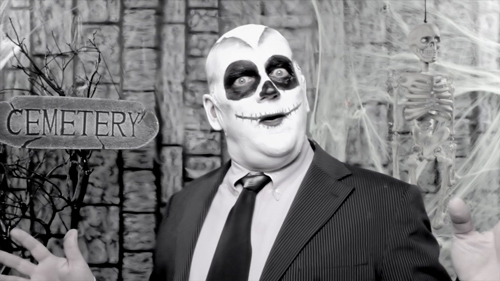 Much credit has to go to the cast; particularly Devin Ordoyne, who manages to embody both the appealingly lame thirtysomething Denny, as well as his horror host alter ego. Ordoyne plays the role with plenty of self-deprecating charm, and makes for an amiably charismatic lead. Equally as good in a much more showy role is Larson as Denny’s nemesis Rick/Count Dracool, a competing local horror host who is primed to hit the big time. Oh, and he’s also a complete douchebag in the best 80s tradition. The director seems to be having plenty of fun with the role, and his inevitable comeuppance ends up being extremely satisfying. Supporting cast is equally strong, with Angela Gulner bringing a lot of dimension to her love-interest role, and Marlon Correa stealing most of his scenes as Denny’s best friend Carlo.

The plot involves Ordoyne’s Denny who, after losing his girlfriend and facing the imminent loss of his house, records a drunken video in the guise of his favorite horror host Ghostman, and sees the video go viral after it’s leaked by neighborhood teen Zack (Matthew Boehm). Irritated by the sleazy, sex-fueled character of local movie host Count Dracool, Denny teams up with Zack and his friend Carlo to start releasing videos as the “Son of Ghostman,” and soon sees his cheesy, pun-filled segments capture the imagination of the entire city. Irritated by Ghostman’s growing popularity, Dracool plots to shut down the project – and Denny – permanently. 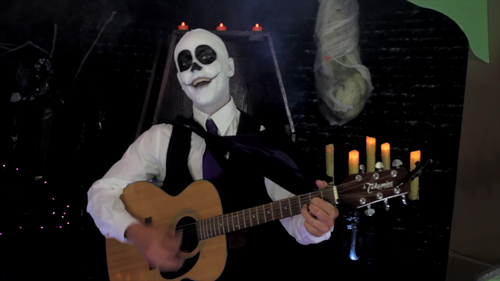 Larson faithfully recreates the look and feel of a classic horror host in the brief clips shown of the original Ghostman, and while it might be difficult to believe that Denny’s corny, threadbare Son Of Ghostman clips would capture a mainstream audience, the brief segments are amusing enough that you could imagine a cult popping up among an increasingly fragmented online audience. Hell.. I’d definitely watch Son Of Ghostman. Denny’s affability carries the film through some of the slower bits, and makes the low-stake plot still feel significant.

Denny’s growing relationship with Clare (Angela Gulner) is obviously influenced by any number of nerd-gets-the-girl 80s movies, and the film hits the comfortably sentimental tone of those movies perfectly – including a surprisingly effective electropop soundtrack that could have come right out of the era. A nostalgic blend like this could easily have come off as mawkish or overly corny, but the characters here hit all the marks. Even a few technical issues – mostly regarding the sound – can’t trip things up. 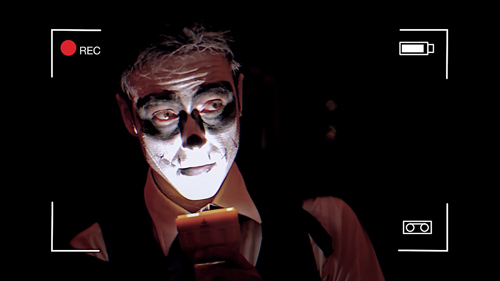 Nostalgic without slipping into irony, and sweet without being sappy, SON OF GHOSTMAN is a refreshingly heartfelt ode to television horror hosts that thoroughly earns its happy ending. Amusing throughout and extremely well acted, it’s proof that a strong message and plenty of imagination can transcend limitations of budget. With any luck the film will be able to find its audience, as this is exactly the sort of compelling material we should be seeing more of. Seek it out.