It was bound to happen, of course — after the surprise success of James Nguyen’s woefully incompetent but painfully earnest BIRDEMIC: SHOCK AND TERROR on the “midnight movie” circuit in 2010 (and in all the years since, given that prints of it are still touring the country even as we speak), the master of the “romantic thriller” (a phrase which he even copyrighted) pretty much had to go back to the well, didn’t he? I mean, what else was he gonna do, especially since he’s apparently chucked his day job as a software salesman in order to pursue his filmmaking “dreams” full time?

And while we’re being blunt and honest and all that — you pretty much know going in what his 2013 follow-up, BIRDEMIC 2: THE RESURRECTION is all about, right? The CGI birds attack again. There’s more of ’em. The whole thing’s bloodier and messier and even if Nguyen’s directorial skills have somehow magically managed to improve, he can’t show it because incompetent shit is what people want. Incompetent shit pays the bills. Incompetent shit ensures that his next project — probably BIRDEMIC 3 — will get made. And yeah, incompetent shit is fun. So, let’s roll ’em on out again — Alan Bagh is back as the personality-free zone who can’t dance known as Rod; Whitney Moore is back as his squeeze, Nathalie; Patsy van Ettinger (who’s sunk a good deal of her own cash into Nguyen’s productions) is back at Nathalie’s mom, Nancy; Rick Camp is back to explain everything for us as Dr. Jones; Damien Carter is back to provide the musical numbers; Stephen Gustavson and Carrie Stevens are back as Mr. and Mrs. Treehugger; and of course the birds are back in droves. 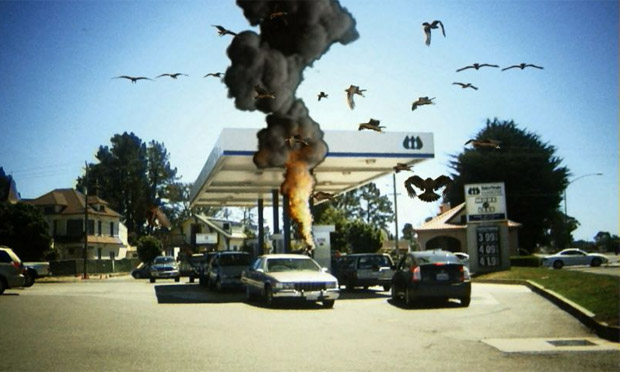 Nguyen has expanded his repertoire somewhat, though, by introducing a new pair of love-birds in the form of wannabe-director Bill (Thomas Favolaro) and wannabe-actress Gloria (Chelsea Turnbo), along with some other CGI monstrosities like the poisonous jellyfish pictured below so you can’t say he’s just resting on his laurels — 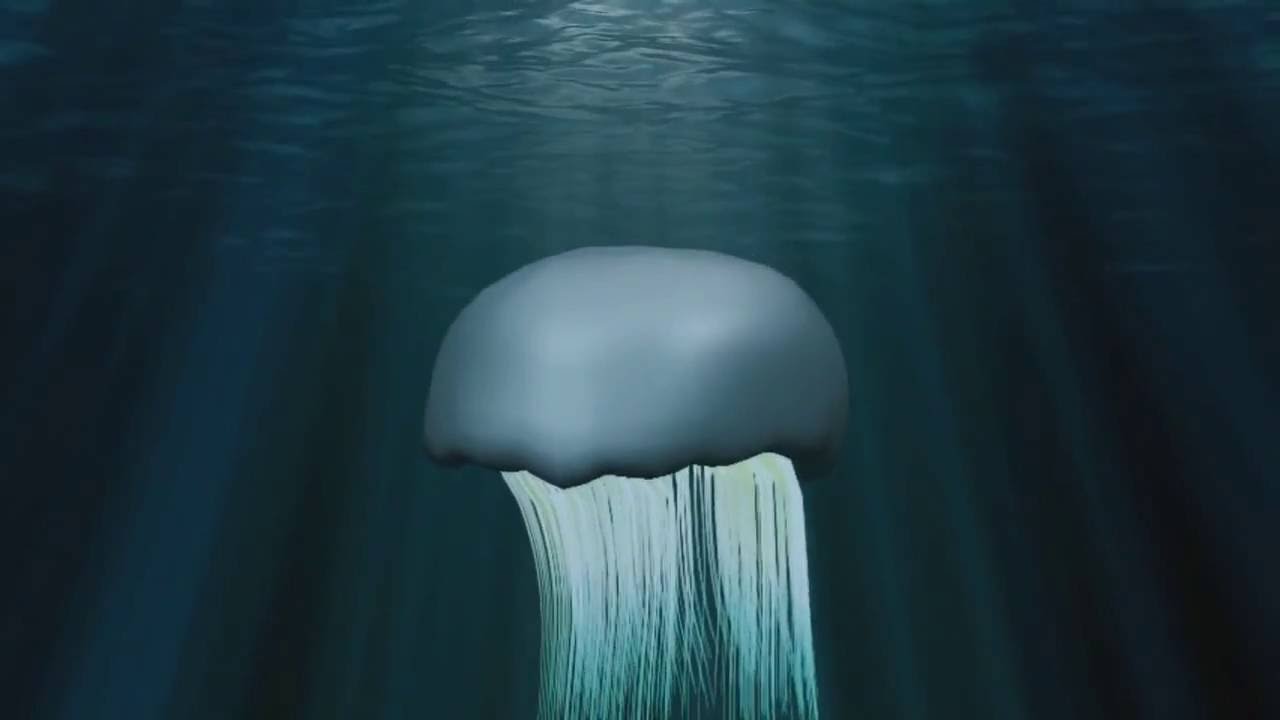 Here’s the rub, though — as “stupid fun” as BIRDEMIC 2: THE RESURRECTION undoubtedly is, this time it’s all done with a knowing wink in the direction of the audience because Nguyen has finally figured out that he’s making absolute crap here. That doesn’t mean he still doesn’t think he’s some new-age hybrid amalgamation of Alfred Hitchcock and Al Gore, but he’s obviously heard from enough people that he’s just not all that great at mixing psychological tension with environmental proselytizing no matter how badly he wishes he were,  and so now he’s just giving the punters what they want, as the Brits would say.

I don’t hold that against him in any way — hell,  I’d probably do the exact same thing in his shoes — but goofy shit like that jellyfish, a scene involving caveman/cavewoman “love”-making, the insertion of some bare boobs (not that I’m complaining), and lines like “let’s use some hangers — birds hate hangers” show that he’s definitely in on the joke now. Hell, one of the two kids they rescue at the end of the first film, Tony (Colton Osborne), has even been adopted by the saintly Rod, but his sister is no longer with us because she died of food poisoning from the fish our “hero” caught at the end last time out (never mind that everyone else who ate it is mysteriously okay), and Nguyen has even gone so far as to change the name of his production company to I Got A Fish Productions.

Still, it’s not like a fortune was spent on this thing — the film’s total budget is reported to be in the $20,000 range — and earlier, more ambitious plans to film in 3-D were scrapped due to lack of resources. So don’t worry, we’re definitely miles away from even a low-budget flick here, and therefore a good deal of that questionable BIRDEMIC  “charm” has still carried its way over to the sequel. Nguyen even takes the liberty of heaping on a new layer of audience brow-beating by having his newest youthful stand-in, Bill, drone on endlessly about the need for “complete creative control” and “staying true to his artistic vision” in his films, and he entertains Gloria on their first date by bleating about why his aborted sci-fi project, titled REPLICANT, failed —  which means now is as good a point as any to inform those of you who don’t know that REPLICANT is the title of an unfinished Nguyen flick from a few years back.

On the whole, though, “more of the same” is the order of the day here, which is cool if that’s what you’re in the mood for, as I freely admit that I sometimes am. To that end, it’s good that an outfit I’ve never heard of before called MVD Visual has released BIRDEMIC 2: THE RESURRECTION on DVD (though not, it’s worth noting, on Blu-ray), and has loaded it up with a shit-ton of extras including outtakes and deleted scenes, cast and crew interviews, and two feature-length commentaries, one from Nguyen and one from his ostensible “stars.” You get a lot for you just-over-ten-bucks-from-most-online-retailers here, and hey! We’ve even got 5.1 sound this time — not that it really makes much difference.

Odds are, then,  that if you liked BIRDEMIC: SHOCK AND TERROR, you’ll like this as well, even if shifting the stage from half Moon Bay to Hollywood sort of glitzes things up a little bit too much (to the extent that a $20,000 production can even be accused of such a thing), and even if everybody, most crucially the director himself, is wise to what they’re doing now. No, it’s not the same “perfect storm of godawful” that the first film was, but then, what did you expect?