FOR THOSE ABOUT 2 TALK:

SO YOU DON’T HAVE TO! 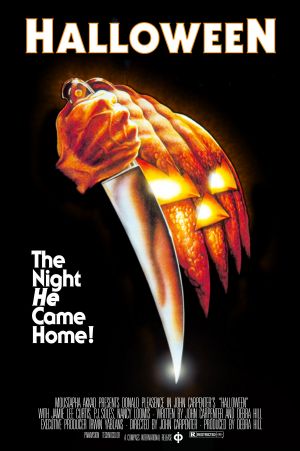 This film is probably number 2 or 3 on my list of all-time horror films. It’s a masterpiece that is even more impressive when you consider that this was only the third film Carpenter had done. What makes this film work so well is that it has true patience. It takes it’s time to build a scene and allow the characters to put together the pieces of what’s happening to them. It also let’s the predator truly stalk it’s prey. The most effective scenes in the film are the ones when Myer’s is in the background, just watching his target. It’s fucking brilliant. I think that’s what all the imitators forgot. It’s not just about the red stuff and how much of it, it’s whether or not we care about the characters who are getting the axe or knife. This came out in 1978 and it gets better every time I seen it.

This was just an okay commentary track. I think it was taken from a few different sources (about twenty minutes into the film some random dude begins to introduce each speaker… each time they talk). On the track we have Carpenter, producer Debra Hill, and star Jamie Lee Curtis, all recorded separately. This is the first time I have heard Hill and Curtis, but I have heard many Carpenter tracks and he is best when he has someone to talk to. He just gets into the film a little more.

You bastards read? Punch it!

HALLOWEEEN was universally panned with the exception of the Village Voice which compared the film to PSYCHO. That one review forced critics to re-evaluate the film.

Debra Hill first met Carpenter as script supervisor on the set of ASSAULT ON PRECINCT 13, they began dating shortly after and stared developing HALLOWEEN.

Jim “The Dragon” Kelly is not in this film.

The opening sequence of the film is a PanaGlide shot (aka SteadiCam). It was inspired by TOUCH OF EVIL.

Carpenter was also inspired by the camera work of Hitchcock and his long continuous shots.

The style of Halloween is driven by simplicity.

Debra Hill is the hand of Michael Meyers dressed as the clown in the beginning of the film.

The Dragon likes to put a red nose on his afro and call it Blackie McGee. Sometimes it’s the only thing that makes him smile.

The first scene was actually the last scene that was shot for the film.

The house was repainted, carpeted, and furnished just hours before filming began.

Carpenter was a fan of Donald Pleasence for many years. He met Carpenter only because Pleasence’s daughter liked ASSAULT ON PRECINCT 13. He told Carpenter he didn’t understand the script for HALLOWEEN and wanted him to explain it.

Carpenter did not reply to Pleasence “This isn’t fucking Tolstoy you old bastard!”

Christopher Lee was offered the role originally but turned it down.

Nick Castle (Dir. Of THE LAST STARFIGHTER) plays The Shape with the exception of one scene at the end of the film.

Curtis was certain she was going to be fired after the first day. She just didn’t think she was doing a good job.

Carpenter didn’t want Curtis at first; he wanted the daughter of someone on Lassie.

He never considered The Dragon for the role of Lori. The Dragon however did think about his own idea for a slasher film. It was going to be called: TENNIS RACKET TERROR. He gave up on the idea after a total and complete lack of interest.

Curtis had never heard of Donald Pleasence before filming began. She didn’t work with him much but thought he was pleasant.

Carpenter wanted the character of Lori to be a “watcher” just like The Shape.

Carpenter got in tight on his shots to create a sense of claustrophobia.

Carpenter thought the other actors that played The Shape never had the grace of Nick Castle.

The Dragon has grace when he dances.

All of Carpenter’s films are anamorphic.

The film was shot in South Pasadena.

The score reminds of Carpenter of Argento’s score in SUSPIRIA and the tubular bells in THE EXORCIST.

Irwin Yablans brought Carpenter in to talk to him about an idea he had for a film called THE BABYSITTER MURDERS. He asked Carpenter if he could make the film for $300,000 and Carpenter said he could if he had creative control. Yablans later decided the film should be set during Halloween and maybe the film should just be called that.

One question Carpenter has been asked in nearly every interview: What scares John Carpenter? While he didn’t answer that directly, he said we’re all aware of the forces of darkness… horror is a universal language.

When Dr. Loomis is telling Sheriff Brackett about seeing “the Devil’s eyes” it is based on an experience Carpenter had while visiting a mental institution in college and having someone look at him with pure evil.

To show the dog being strangled outside the house, the trainer picked the dog up and they rolled in slow motion while the trainer put him back down.

The Dragon is more of a cat type of guy… and ferrets. Ferrets are funny.

The copy of THE THING FORM ANOTHER WORLD playing on TV is Carpenter’s print on Carpenter’s television set.

The laundry room sequence was one of the most difficult scenes to shoot.

Carpenter: If you make movies to please everyone, you’re doing nothing but making Muzak.

Pauline Kael criticized Carpenter for not having a sense of timing on the film. Carpenter thinks that she didn’t understand the deliberately slow pacing of the film.

Carpenter thinks there’s a grain of truth in every successful horror film.

Halloween came out around the time of the Jonestown Massacre; Carpenter thinks this may be responsible for some of the success.

The Dragon would have wrecked that shit.

Carpenter on the imitators: The HALLOWEEN imitators lost sight of characters.

The mask the shape is wearing is a painted Capt. Kirk mask.

Because the film was shot out of sequence, they placed “terror levels” in the script so Jamie Lee Curtis would know how scared her character should be in a particular scene.

When Carpenter showed the film to an executive without the music, they didn’t think it was scary. When they saw it with the music, they said they were wrong and found it very scary.

Jamie Lee Curtis said it was only when she made the jump to large Hollywood productions that she was ever asked to take her top off. She never felt exploited working in the world of low budget films, but has several times in the bigger films.

HALLOWEEN was the largest grossing independent film in history at the time. It cost $300,000 to make and grossed over $55M. Carpenter and Hill received very little money from the film.

HALLOWEEN 2 was made because of business considerations. It was going to be made with or without Carpenter and Hill so they decided to go ahead and do it to try and make up some of the money from the first film.

Carpenter sat down to write the sequel and realized there was no story there. All he was doing was xeroxing. He thinks the sequels are all kind of sad.

Carpenter thinks the point of HALLOWEEN, if there is one, is that you can survive the night. Be aware that evil exists, that there are bad things in the world, but with a little luck and awareness you can survive.

The Dragon is invincible.

That’s it for this week bastards. FTA2T will be back next week-ish with some yackety from Tobe Hooper and TEXAS CHAINSAW MASSACRE.