FOR THOSE ABOUT TO TALK – LISTENING TO COMMENTARY SO YOU DON’T HAVE TO.

THIS WEEK: ENTER THE DRAGON 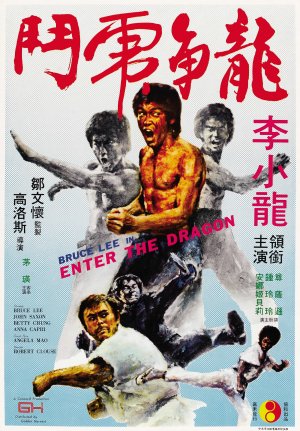 Rarely is there a middle ground in commentary tracks. They are either really good (listen to a Tarantino track) or they are really bad (like today’s pick). For Those About to Talk was created for both camps. Not a lot of people have time to watch the same film twice and when a yak track sucks it seems like a particular waste of time, case in point: Paul Heller’s commentary on ENTER THE DRAGON. Heller has produced an academy award winner and some tough as nails cinema: ENTER THE DRAGON and DIRTY HARRY. He also produced a film I would call well south of tough but still cool as hell: BLACK BELT JONES. The guy has been in the business a long time and you would think he would have some stories he could drop, particularly on a film like ENTER THE DRAGON. This may be the only man on earth that could make Bruce Lee boring.

It’s not all shit-pies and lame analogies though, there’s still some cool behind the scenes nuggets here and FTATT is here to record the good stuff. So let’s move…

COMMENTARY PROVIDED BY: Producer Paul Heller, and screenwriter Michael Allin (who Heller calls on the phone about 5 minutes). who only has a few sentences to contribute.

The actor playing the monk in the opening scene is also a pilot. He found Han’s island on an afternoon flight with the Paul Heller. The black and white photo of the island (seen when Lee is getting a briefing by Mr. Braithwaite) is a composite of homes found on various islands. 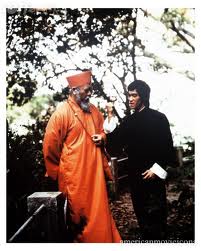 Original title for the film was BLOOD AND STEAL.  It was changed to ENTER THE DRAGON as an homage to the translation of his screen name in China; Li Xiaolong, which means Little Dragon.

Lee had three names in total: One in Cantonese (Lee Jun-fan ) and  three in Chinese (Li Yuanxin  and a family/clan name; Li Yuanjian).

The walk Lee goes on with the Monk was not in the original script but was added later to reflect Lee’s passion for martial arts.

ENTER THE DRAGON was one of the first international films to shoot in Hong Kong.

Heller wanted to give the film a Terrian Pirate look, very vivid and bold colors. Han’s dining room is evidence of this.

Golden Harvest founder/owner Raymond Chow (who was also the one-time head of publicity and production chief for Shaw Brothers) is responsible for giving Lee his kick-off as a star. He cast Lee in The Big Boss.  After the premiere of that film Lee was an overnight sensation.

This was the first time most of the sound effects used in the film were heard in the States. Prior to ENTER THE DRAGON, the sounds of Kung-Fu punches and kicks had only been used for Asian productions.

John Saxon was hired for his skills as an actor but turned out to also be a brilliant on-camera fighter according to Heller. Saxon holds a black-belt in Karate.

Jim Kelly was the opposite of Saxon, he was hired for his fighting skills but turned out to be a great actor. Kelly was hired 2 days before the film began production, the actor who previously had the role was shit-canned, and no reason was given. My guess is that Jim Kelly demanded to be hired and what Jim Kelly wants, Jim Kelly gets!

Han’s army that is training when Lee gets to the island is actually the grounds of an old tennis club. Some of the lines on the courts are still visible.

Over 300 extras were used on the set.

The bird cages hanging from Han’s dining room were used to give depth to the location. The shots overhead without the bird cages looked dull… kind of like how Heller’s commentary sounds.

The scenes in the dining room took about 3 days to film. The food being carried around (fish, lobster) got a little gamey. Note to self: Don’t use fish on a 3 day shoot.

The scene when the ladies come to Lee’s room at Han’s palace was the first scene he shot for the film. It took them several takes to get Lee to complete the most basic movements like turning his head because he was visibly nervous.

Lee was actually 2 days late getting to the set; he had disappeared to deal with his nerves. He finally arrived at the insistence of the producers who had nothing more to shoot without him. 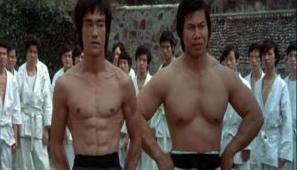 Bolo Yeung was the Chinese Mister Universe. Heller thinks he’s incredible developed and sounds like he wants to bone him a good one.

I think Lee’s fight with Bob Wall is the best battle in the film. It really shows his intensity and focus. 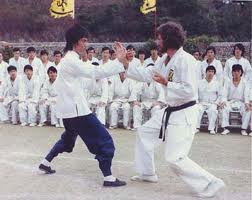 Bob Wall told Lee to give him all he could, that he could take a punch or kick and wouldn’t move. The scene where Wall goes flying back into the crowd after Lee kicks him in the chest was planned; the fall into the crowd was not. Lee’s kick was that powerful.

China didn’t have breakaway glass (or sugar glass), the bottles Bob Wall smashes together were real. Lee required 4 stitches after he was cut by the glass. This was an accident, Lee was not upset contrary to the urban legend that Wall cut Lee on purpose.

The roles of the prostitutes were very difficult to cast. No credible actress would play a prostitute or paint her face. The producers hired girls from clubs instead and had to pay by the hour.

The Cobra that Lee snatches is real.

The cave under Han’s lair is a set. 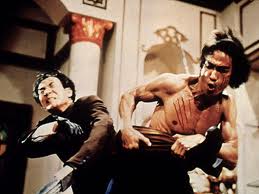 Paul Heller was a radio operator in the army. These are the kind of things you learn when the commentary tracks suck balls.

Lee worked with a cadre of stunt people who picked up the choreography very well.

Lee never made contact on any of the punches he throws.

All of the fight scenes in the film were all filmed in real-time, except for the slow-motion shots.

Heller on Lee’s death: Lee was visiting a friend and had a headache. His friend gave him a prescription pill which Lee, unknowingly of course, was violently allergic to. After taking the pill, Lee laid down at which point his brain began to swell.  After his friend failed to wake him, he was rushed to the hospital and died within the hour.

No way could Saxon take Bolo… no way.

Yeah, we get it Heller, Bruce’s hits never make contact. Move along.

Heller is very proud of the structure of the film and I agree, this is a very well-paced and well-crafted film.

Lee was famous for his 1 inch punch. He would hold his fist an inch form your chest and still make tremendously hard contact. He performed this on Heller, which I would also like to do after this commentary.

Lee was the only one to get injuries on the set. He would pull groin muscles frequently, stopping a kick at a certain point instead of following through caused most of those injuries.

The idea for using a mirrored room in the finale was conceived after the production crew had lunch in a hotel. After walking to the bathroom Heller found a wall of mirrors which gave him the idea for the finale. He then called Lee over to take a look who also liked it.

The camera in the finale was sitting in a mirrored room.

Lee was the key on the set to getting things done. If the Chinese crew refused to do something the producers asked for, Lee would ask them and the task would be completed quickly.

Heller’s favorite shot in the film is the scene where Han is spinning around on the secret wall.

And there it is, the first FTATT is in the books. We are back next week with Bill Lustig dropping some yakety on VIGILANTE.