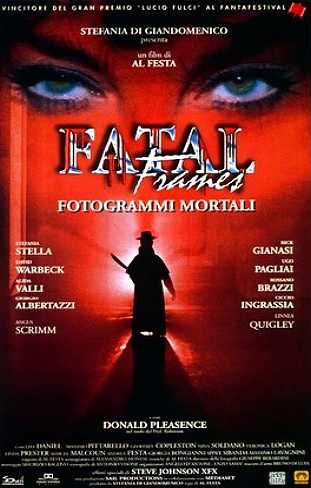 Sounds pretty good, right? Of course, these sorts of dream projects have a habit of going wrong, and few have gone more wrong than 1996’s FATAL FRAMES; a beautiful boondoggle of a film that manages to run off the rails spectacularly thanks to the hubris of its director and the wrongheadedness of his gonzo vision.

The most startling thing about FATAL FRAMES is just how far it manages to go off-course. One would think that a celebration of a genre that is notoriously obsessed with style rather than substance would require only strong compositions, energetic cinematography and the requisite mystery slasher in order to be successful, and this film has all three in spades. Every minute is packed with gorgeously shot Rome locales, often with INFERNO-like blue and red lighting and a heaping dollop of fog (aka atmosphere) rolling around every corner. 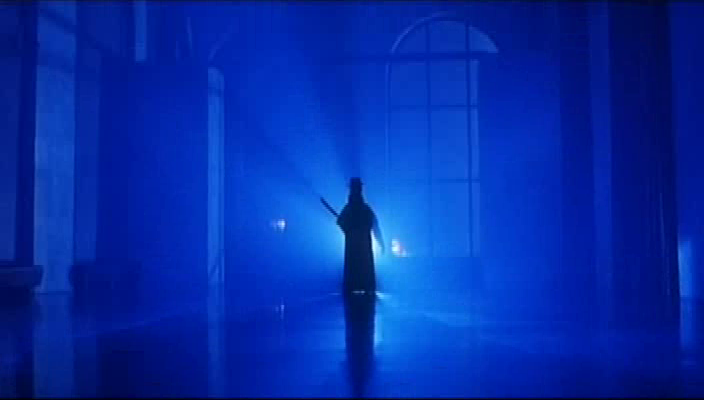 What plot there is, is alternately intriguing and idiotic, with echoes of DEEP RED and THE BIRD WITH THE CRYSTAL PLUMAGE, culminating in a shocking — if telegraphed — ending that manages to make more sense than that of most gialli I’ve seen. We spend most of our time with American music video director Alex Ritt (SGT. KABUKIMAN‘s Rick Gianasi), who has recently suffered the loss of his wife under disturbing circumstances — decapitated in his apartment — and who has decided to fly to Rome to help launch the career of Italian singer Stefania Stella (playing herself.. sorta). Alex witnesses the murder of a dancer from his video, with him trapped impotently behind a gate while a masked killer slashes her to death with a curved machete. He goes to the police, but soon becomes a suspect as it’s discovered that the murderer films the corpses of his victims. More deaths follow, and soon the Italian police are joined by an FBI agent (Donald Pleasence) from the U.S. – who had previously investigated the murder of Alex’s wife – as well as the wife’s father, who promises he has new revelations about the case and the killer.

Many of the elements in that plot summary will seem awfully familiar to fans of the genre: A masked slasher with fetishistic tendencies. A fish-out-of-water American accused of murder. A growing number of red herrings being stylishly — and bloodily — dispatched. But it’s all so damn messy, and paced so languidly, that only the most patient viewer will possibly care how it all resolves. Perhaps if the characters were likable they could rouse up a little sympathy, but these are as unpleasant a group of protagonists as you’re likely to encounter. The lead detective (played by David Warbeck) spends the final hour being confused, irritated and baffled by the behavior of the people he’s surrounded by, and you’ll be feeling similarly as the characters continue to make idiotic decisions in order to push things — however slowly — forward. 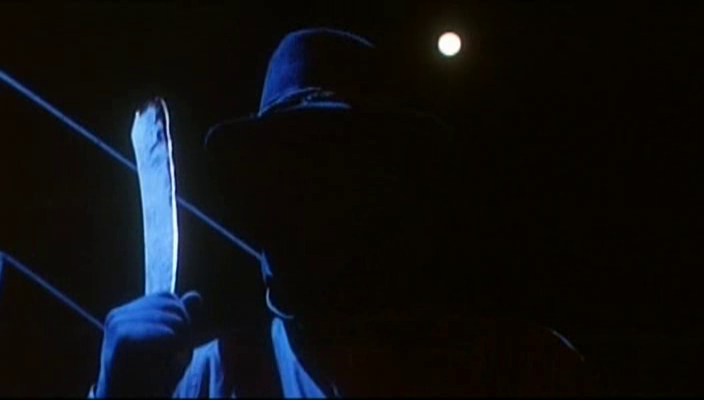 It’s almost unfair to criticize the quality of the dubbing, as poor dubbing is almost tradition in gialli. The bigger problem here is that it’s combined with a script that was quite obviously written by someone with a poor grasp of English, so you have actors reciting impossibly stilted, robotic dialogue that often immediately contradicts itself. This plagues even the finest actors who appear (Angus Scrimm’s brief moments are an embarrassment), with Donald Pleasence even having the indignity of someone dubbing his famous voice who sounds nothing like him. In the film’s defense, it’s likely that his death – which occurred between the film’s original production and its completion years later – made this a necessity. Only David Warbeck, himself only a couple of years from death, acquits himself well… likely due to his intimate familiarity with low-budget Italian productions.

But then there are cast members who need no help in being terrible. If you like, greasy, curly, ridiculous-looking hair, then this is your new favorite movie. Rick Gianasi is beyond bland in the lead, and seems entirely unable to emit any emotion aside from confusion. Since the more famous appearances are really nothing more than cameos, most of our time is spent going from exotic location to exotic location with him, occasionally joined by his doppelganger producer. I’ll give Rick the benefit of the doubt and suggest that his performance wasn’t helped by either the shifting plot or the post-dubbing. 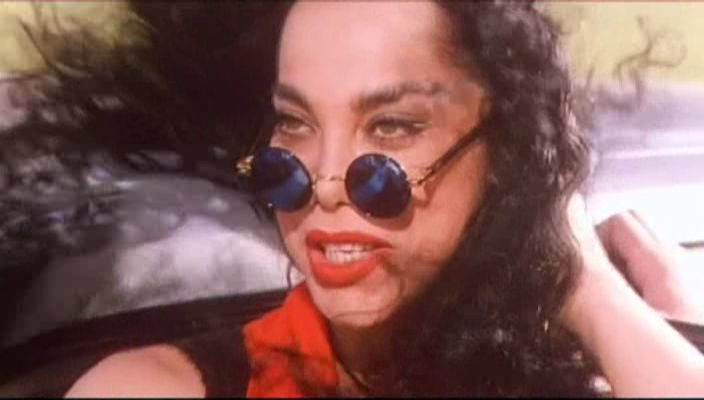 And finally there’s Stefania Stella. Looking like some sort of real-doll blessed with semi-sentience, Stefania appears to be more plastic and silicone than flesh and blood. Her English is so poor that most of her lines are completely unintelligible, while her singing is the worst sort of bland, Euro-pop nonsense that would have sounded horrifically dated even when the film was originally filmed. Of course, there are two lengthy music video sequences that are absolutely interminable; stopping the film cold so we can see her show off her incredibly meager talents. In the end this might be the least successful vanity project ever made, because most viewers will come out of the film never wanting to see or hear from Stefania Stella ever again.

It’s hard to condemn FATAL FRAMES for being confusing, as its plot is actually fairly straight-forward compared to your average giallo. However, there’s no excuse for how ponderous it is. Just scene after repetitive scene of confused faces, terrible dialogue and Stefania Stella will have the most patient viewer looking for the fast-forward button as the film leaps past the two-hour mark. While a few stylish moments show off Festa’s background as a video director, these soon got lost in the toxic sludge of poor performances and the wasted appearances of so many recognizable and legendary actors. A beautiful mess, but definitely a mess.

AN ATTRACTIVE DISASTER. ONLY WATCH IF EURO-TRASHED.