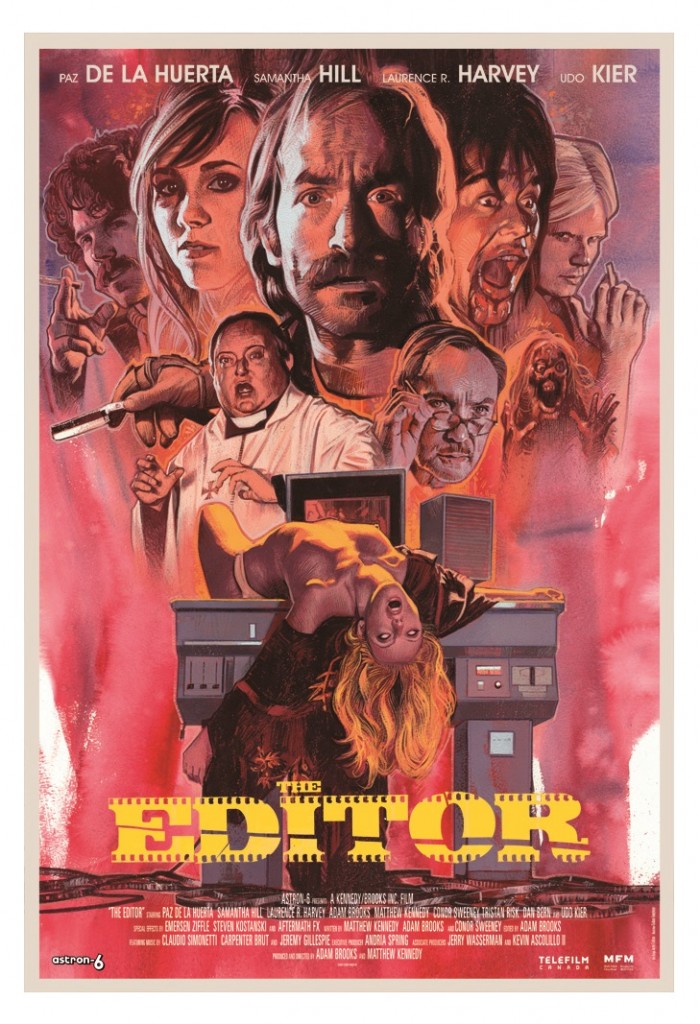 While modern filmmakers have always borrowed liberally from the aesthetics of the genre, the giallo narrative has also made something of a comeback the last few years. Films such as THE STRANGE COLOR OF YOUR BODY’S TEARS, BERBERIAN SOUND STUDIO, and SONNO PROFONDO play with central themes from the genre –private investigations, subconscious trauma, and always, always black gloves – resulting in films that are aspiring to (rather than inspired by) their predecessors.

And like most film genres that are long on style and short on substance, the modern giallo can thrive on a small budget. Due to the giallo’s history of lavish visuals and low production costs, newer entries range in cost from the modest – 2012’s BERBERIAN SOUND STUDIO, with an estimated budget of $1.5 million – to the downright cheap: 2013’s SONNO PROFONDO, for example, cost an estimated four thousand dollars to make. Even with limited resources, these filmmakers are able to blend together music and color to recreate the same experience that many giallo fans looked for in ‘60s and ‘70s movies.

One such film is last year’s festival favorite, THE EDITOR.

In 2014, Astron-6, the production company behind MANBORG and FATHER’S DAY, threw their hat into the ring with their own crowdfunded giallo tribute. Rey Ciso (Adam Brooks), a world-famous film editor trying to come back from a horrible accident, can only find work on low-budget horror films. When a mysterious person starts killing the cast and crew of his most recent film, Ciso takes it upon himself to solve the crime.

Our own Jason Coffman included THE EDITOR as one of his ten favorite films from 2014:

Combining their signature dark humor with garish colors, bad English dubbing, plentiful nudity and excessive gore pulled right from the films of Dario Argento, Sergio Martino, Lucio Fulci and countless others, THE EDITOR delivers more than any horror fan could possibly ask for while lovingly and hilariously sending up those films. Like FATHER’S DAY before it, THE EDITOR had me laughing until I was crying and out of breath. 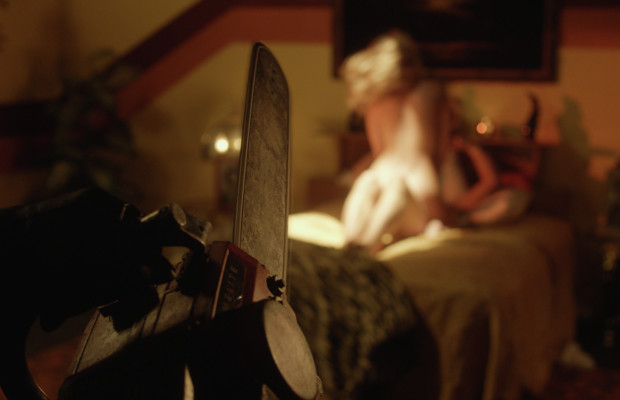 With THE EDITOR now making the transition from the festival circuit to home video, Daily Grindhouse’s Matthew Monagle sat down with Adam Brooks, the film’s co-writer, co-director, and star, to talk about his love letter to the genre.

Daily Grindhouse: The obvious first question: why make a giallo? What about the genre appeals to you?

Adam Brooks: I like how much style the old giallo films had, the super saturated colors, POV shots, beautiful women and overbearing soundtracks. The style was the substance in many cases, and often trumped even logic within those films, leaving viewers with striking imagery and powerful music long after the narrative fades away. Very dream-like.

Early gialli referenced the genre’s origin by telling stories about writers. What made you want to tell your story about a filmmaker?

I guess because we aren’t the greatest writers, but we wanted to make a movie about movies as much as it was about anything. The original idea came to me while I was losing my mind editing FATHER’S DAY.

Many gialli are famous for their overlapping use of actors and actresses. How did Paz de la Huerta and Udo Kier get involved with THE EDITOR?

We get this question a lot but the answer is quite boring – we approached them the way filmmakers approach actors, through their agents. We sent a sizzle reel, proof-of-concept-type-video and the script and luckily for us they were both interested and available.

Working with Udo has been the highlight of my filmmaking career thus far. He is amazing. 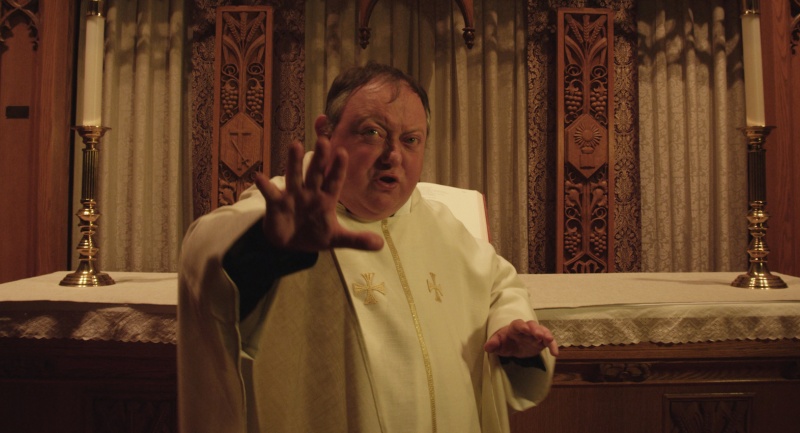 There are a lot of great references in THE EDITOR to classic gialli. How did the writing process work to accommodate all of those bits while keeping the focus on the film’s storyline? Did you have any references in mind from the very beginning?

I guess the problem is we started this like FATHER’S DAY, as just a trailer – this isn’t super-common knowledge cause we actually got funding to make a feature version before the trailer was ever finished or released. But we started it as another fake trailer, and we wanted to pack in as many references to our favourite gialli as possible.

THE EDITOR has a great blend of legendary composers and contemporary artists inspired by the genre. How did your soundtrack come together?

We went after the best musicians we could find. It’s amazing how well it all came together, considering none of the musicians worked together or really knew what the others were doing. I think it’s our best soundtrack to date. 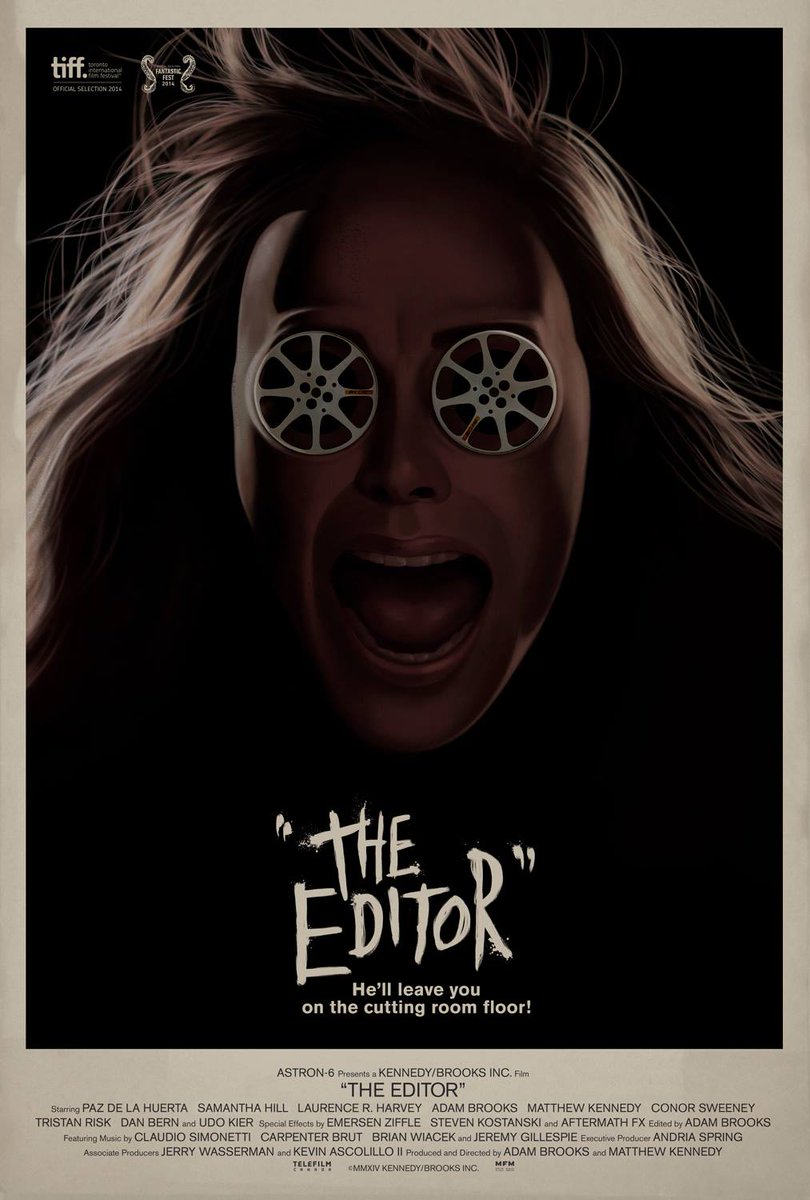 THE EDITOR has played at some incredible festivals over the past few months. What’s next for the film? A limited theatrical or VOD release?

Those details, as well as the release date(s) will be up to the individual distributors in each territory. What I can tell you is there will definitely be a special edition bluray coming out in America this year, and we still have a few more exciting film festivals up our sleeve before that.

And when you see THE EDITOR, keep an eye out for Daily Grindhouse’s Tristan Risk, who plays a role in the film! 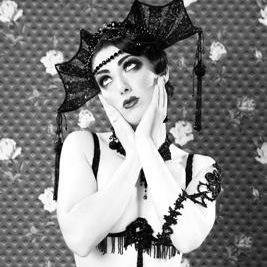