GONE GIRL is in theaters across the country as of today. Based on a mega-bestselling novel by Gillian Flynn, the movie is even more interesting to avid filmgoers as the latest David Fincher film. Fincher’s most frequent job title is director — he works from scripts written by a variety of talented writers and enlists world-class cinematographers whose contributions should never be backgrounded. That said, there’s an authorship to a David Fincher film that is increasingly rare at the big-studio level. Fincher is a distinctive stylist and a master of atmospherics, with a canny eye for casting and a deft ear for music. Thematically, Fincher’s feature films are borderline nihilistic, which is a fascinating counterpoint to his side career as a successful director of commercials and music videos. It’s intriguing to see such captivating visuals matched to a worldview that is sardonic at best.

Before seeing GONE GIRL, I thought I’d repost my thoughts on his previous three films (my archives don’t go back further than 2007.) Here’s my take on THE GIRL WITH THE DRAGON TATTOO.

David Fincher’s adaptation of THE GIRL WITH THE DRAGON TATTOO opens with an intense, aggressive, dynamic, pansexual, twisted credit sequence.  It’s a series of appealingly grotesque images; inky silhouette figures mixing and morphing and blending into each other, scored to the wild industrial howl of Karen O and Trent Reznor’s urgent cover version of Led Zeppelin’s “Immigrant Song.”  Check it out:

This credit sequence is disturbing and exciting and in my opinion the only thing to match it in the nearly-three-hour film that follows is Rooney Mara’s ferocious, revelatory performance.

THE GIRL WITH THE DRAGON TATTOO is based on a lengthy novel by Swedish muckraker-turned-fictioneer Stieg Larsson, who famously, unfortunately died before seeing the international phenomenon that became his posthumously-released trilogy of mysteries featuring the now-famous team of disgraced journalist Mikael Blomkvist and disturbed hacker prodigy Lisbeth Salander.  The books were turned into a successful series of films in Larsson’s native Sweden, with the role of Lisbeth Salander going to a woman named Noomi Rapace who will soon be seen in the lead role in Ridley Scott’s PROMETHEUS. I haven’t seen any of the Swedish Salander films, but I’ve read the first book, and that’s where I was coming from when I saw the high-profile American version last winter.  I was excited when I heard David Fincher was directing from a Steven Zaillian script, although I had a nagging sense of disappointment that such a uniquely talented director was covering such well-trod ground.  And I don’t like it when my misgivings are proved correct.

1)  There’s not enough story here to justify the movie’s length.  The book is 480 pages.  The movie is 158 minutes, well over two-and-a-half hours.  There’s not quite as much Swedish politics and magazine publishing day-to-day and white-collar crime and expansive geneology in the movie as in the book, but there’s still plenty more than any one movie needs.  Good drama is about incident, not details, and with respect, Larsson’s work was far stronger on the latter than the former.  Which ties into the second point.

2)  There’s plenty of atmosphere, but not that much mystery.  This is a testament to the cinematic mastery of Fincher.  The man is incapable of shooting a movie that looks and feels anything less than impeccable, precisely-mounted, and absorbing.  He makes movies that look better than most movies, yet his images have texture and mood and momentum, all of which make his films feel weightier and realer than just a moving coffee table book of pretty photography.  But all the grace in the world can’t lift a story that is lacking.  THE GIRL WITH THE DRAGON TATTOO is a mystery at its core — Blomkvist and Salander are hired to investigate a decades-old cold case involving the disappearance of the niece, Harriet, of the mega-wealthy Henrik Vanger (played by the formidable Christopher Plummer.)

It’s an Agatha Christie whodunit, a parlor mystery.  But rarely in a film of this pedigree (and length) is the list of suspects so limited.  Was it Henrik’s nephew, Harriet’s brother Martin (Stellan Skarsgård)?  Was it Dirch Frode, Henrik’s attorney (Steven Berkoff)?  Was it Henrik himself?  It’s fairly obvious in the book and it’s very obvious in the movie.  Casting, baby, casting.  Anyone who’s seen a few movies before will quickly pick out the bad guy — which isn’t necessarily a problem, if the story hadn’t spent so much time building to the monumental — and in fact, anti-climactic — reveal.

3)  It’s ironic that Daniel Craig plays the role of Blomkvist, since, like James Bond, Blomkvist manages to bed just about every female character in the story.  (The movie actually does the service of removing one of the love affairs from the novel.)  In the book, since Blomkvist is a crusading journalist like Larsson was in real life, this romantic track record reads like wish fulfillment on the part of the author.  In the movie, it’s troubling in a different way.

As in the novel, Blomkvist and Salander become romantically involved.  In both the novel and the film, this feels false.  Salander is a troubled victim of sexual abuses whose mutable sexuality sees her at an early point in the story having a fling with another young woman.  The fact that Salander isn’t resolutely a lesbian does make her interesting, but the fact that she quickly hooks up with the traditional male hero figure makes her far less so.  As dreamy as Daniel Craig may be, and as altruistic and intelligent as Blomkvist is meant to be, it’s difficult to buy this man in particular, let alone any man, as the type to attract Lisbeth Salander.

Salander is by far the most intriguing element Larsson’s novel has to recommend it, and she’s by far the strongest part of Fincher’s movie.  Rooney Mara had a small but pivotal role in Fincher’s THE SOCIAL NETWORK, but here she tears into the central protagonist role with a nearly-animalistic fury.  It was one of the oddest, most bruising, most unpredictable female performances to come out of any movie last year, and it should have been more widely recognized and rewarded.  The most thrilling and violently compelling scenes of the movie are when Mara, as Salander, avenges herself and her gender against a patrician society full of debased pigs in jackets and ties.  Blomkvist is comparatively a good guy, but he feels like a civilian when she’s more of a symbol.  It’s a little like how Wonder Woman used to date regular dudes without superpowers and it didn’t feel right.  It’s a little worse than that, actually.

The romance angle in THE GIRL WITH THE DRAGON TATTOO quite frankly isn’t worthy of the Salander character.  At best, it plays more like CHASING AMY (where a straight man “converts” a gay woman), really, and I expect more nuance out of David Fincher than I do of Kevin Smith.  At worst, it lazily discards all the character work that would make the story original.  The final scene of the THE GIRL WITH THE DRAGON TATTOO movie, which I have little trouble spoiling as it spoils the movie all by itself, shows Lisbeth Salander, awesomely vicious warrior of the internet age, excitedly buying a gift for Blomkvist.  She goes to give it to him, but instead spots him reconnecting with his longtime paramour, Erika Berger (Robin Wright).  Upset by the sight, Salander spitefully tosses the present in the trash, like a jilted schoolgirl, without ever confronting Blomkvist about the betrayal.  It’s an egregious end, considering how the fierceness of this character has until this development been the best and (frankly) the most active part of the movie.  THE GIRL WITH THE DRAGON TATTOO is much too well-made a movie to have that flawed an ending. 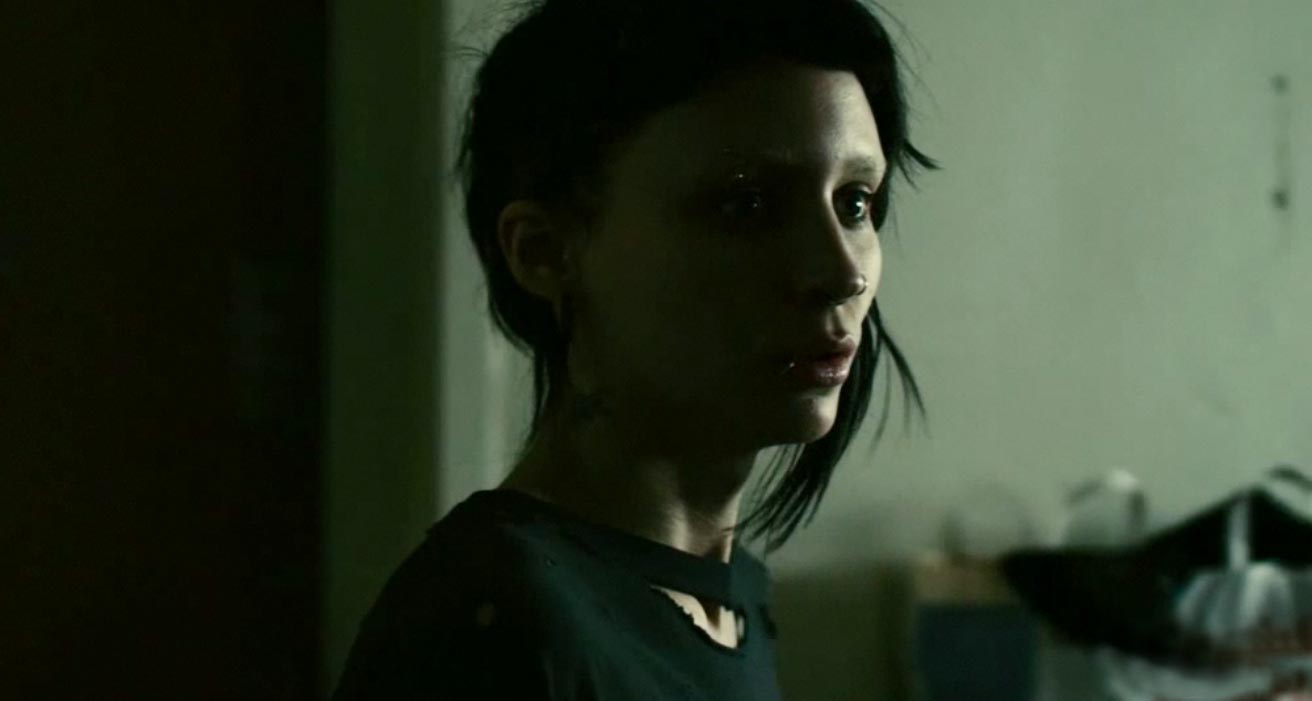 Bottom line (in my opinion, as always):  Good character, good screenwriting, great acting, great direction, bad story.  The last undoes the rest.  To make a great movie, as Fincher has done before and will do again, you need all of the elements working in concert.  A false note played that loud spoils the entire symphony.