We here at DAILY GRINDHOUSE want you to have a copy of Nicolas Winding Refn’s THE NEON DEMON, now out on Blu-Ray and VOD.

It’s not going to be easy though. In order to be entered in to the contest we need you to tweet out “ #NeonDemon #DailyGrindhouse,” and feature a photograph of your favorite model (don’t forget to tag @dailygrindhouse and @tnd_film in the picture). Details are very important, don’t disqualify yourself over a silly mistake. 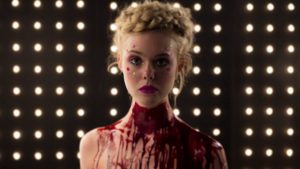 Perhaps you like retro pin-ups like Bettie Page or maybe you’re more into the waif look like Kate Moss. Perhaps supermodels like Cindy Crawford and Naomi Campbell are your thing? Maybe Twiggy with her retro-‘60s stylings is what you dig. Don’t leave out the boys either, like Tyson Beckford, Mark Wahlberg, and Tyson Beckham,

Enter as many times as you’d like. A crack team of judges who will evaluate your photograph on creativity, poise, design and originality will choose the winner.

The contest will end on Tuesday, October 11th with our winner announced shortly after that.