This review contains SPOILERS for the first four PHANTASM films. 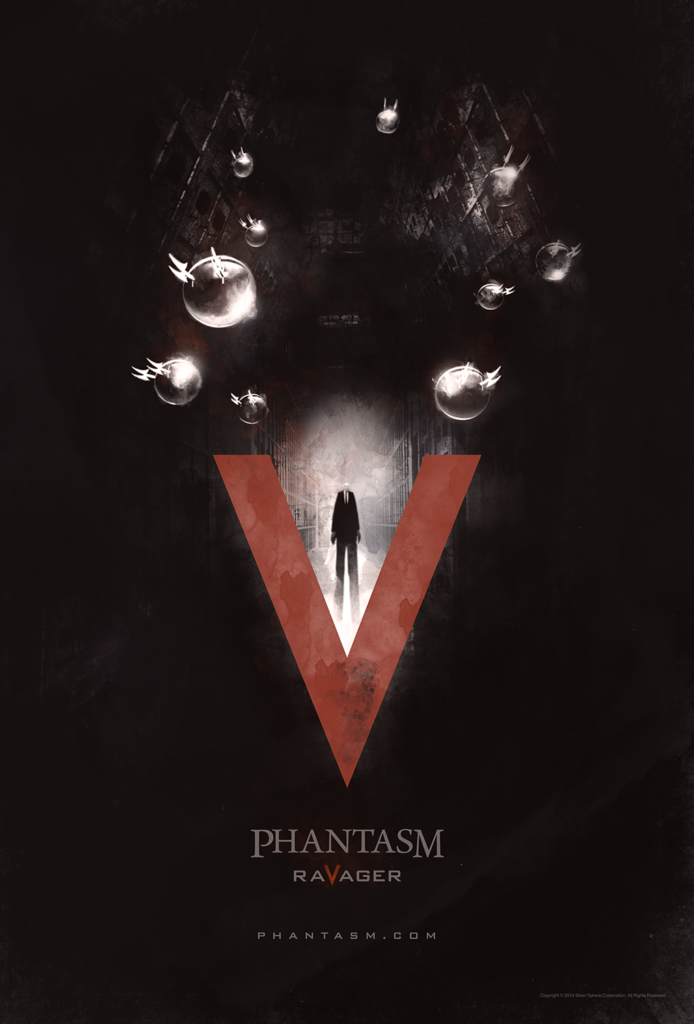 The production announcement of PHANTASM: RAVAGER in 2014 filled me with both excitement and dread. In my look at the mythology of the PHANTASM films, I was clear in my belief that the story ended with the death of Mike (A. Michael Baldwin) in PHANTASM IV: OBLIVION. Sure, Reggie (Reggie Bannister) ran through an interdimensional portal in pursuit of The Tall Man (Angus Scrimm), but the story of Mike’s attempts to fight mortality — both his own and those he loves — that began way back in 1979 with the original film, was brought to a close. Reggie charging forward into the unknown, ever the loyal hero, seemed a fitting conclusion for his character. While I looked forward to the chance to spend a little more time with characters whom I had grown to love over the years, I was more than a little concerned that Don Coscarelli and company were pushing their luck with one more film.

Make no mistake; RAVAGER has to be the final film. During post-production, Angus Scrimm passed away. There is no PHANTASM without The Tall Man, and there is no Tall Man without Angus Scrimm. Recasting him is not an option. This finality puts even more pressure on RAVAGER to deliver the goods.

Approaching RAVAGER with the dual emotions of excitement and dread, I had no idea what to expect from the film when I recently sat down to watch its world premiere at Fantastic Fest. As the end credits rolled, I was torn about how I felt. For every positive moment that gave me that unmistakable PHANTASM high, I found a flaw that nagged at me. In my crosstalk with Daily Grindhouse Managing Editor Mike Vanderbilt, I tried to figure out if the flaws on display were enough to derail the film for me.

As it turned out, I needed another viewing of the film (thank you for scheduling that second screening, Fantastic Fest) to make up my mind. In the first viewing, I was touched by Reggie’s story and had simply enjoyed the nostalgic feeling I got from seeing Mike, Reggie, and Jody (Bill Thornbury) back together. Upon second viewing, the emotional impact of the story being told hit me hard, with an understated climax that left me in tears. How many part fives in a horror franchise can pull off that trick?

Like the previous sequels, RAVAGER continues the story almost immediately from the ending of the last film. Reggie, having gone through the interdimensional gate at the end of OBLIVION, is still chasing The Tall Man. Reggie is tired, dirty, barely shuffling his feet as he makes his way across the desert. He explains via voiceover that he thinks he is home, but cannot be sure since he has made his way across so many dimensions in his hunt. His voiceover catches the audience up on his search for not only The Tall Man, but also Mike (since Mike’s body appeared to die at the end of OBLIVION, I assume he means that he is searching for the gold sphere that was apparently Mike’s brain—stolen by The Tall Man).

After a fun scene that finds Reggie confronting a scumbag (Daniel Schweiger) who is trying to steal his ’71 Cuda, the sentinel spheres make their first appearance. A nifty action sequence with Reggie outmaneuvering the spheres in the Cuda ensues, ending with an unexpected smash cut as he shoots one out of the sky.

The smash cut goes from Reggie firing his gun to him sitting in a wheelchair. He looks older and in rougher shape than he appeared in the desert. Pushing the wheelchair is Mike, who puts a calming hand on Reggie’s shoulder as he appears disoriented and frightened. Mike tells Reggie that he was found wandering in the desert. Even worse, he has been diagnosed with dementia. Reggie tries to argue that the dementia diagnosis is just another trick of The Tall Man, which makes Mike sigh as though he has heard this story a thousand times before, but he encourages Reggie to tell him the story one more time.

The story that Reggie tells is best left up to the audience to discover. It hits a lot of the touchstones for which the PHANTASM films are known. There is a beautiful woman that Reggie meets on the road. A couple of bit characters are introduced that exist strictly as fodder for the spheres. And nightmare logic rules the proceedings as Reggie’s tale slips back and forth between his battles with The Tall Man and his disorienting time in a nursing home.

RAVAGER is the first of the PHANTASM films not directed by Don Coscarelli. David Hartman, an animation director who created the killer spider sequence for Coscarelli’s JOHN DIES AT THE END, takes the helm here in what could be considered a no-win situation. Directing from a script he co-wrote with Coscarelli, if the film worked, it would be easy for fans (or “phans”) to give credit to Coscarelli for the success, pointing to his involvement as producer and co-writer. If the film failed to work, it would be easy to blame the new guy for screwing it up. But Hartman deserves credit for pulling together what had to be a difficult production, given the obviously miniscule budget, Scrimm’s frail condition, and the feature’s roots as a series of short films.

Hartman does two things very well. The first is that he is great at cutting between the action-horror storyline of Reggie’s clash with The Tall Man and the sober reality of Reggie’s time in the nursing home. The nightmare logic he taps into is the best example of this type of storytelling in the series since the first PHANTASM. As the film goes on, the way he increasingly blurs the line of what is real and what is imagined leads to some of the most emotional moments in a franchise that has always embraced sincerity. The second thing he gets right is an understanding that the audience loves the characters. Some might see the extended moments of bonding he gives character beats as being maudlin, but for longtime fans of the PHANTASM films, the connection between Mike, Reggie, and Jody is what has always mattered. Baldwin, Bannister, and Thornbury seem to honestly have affection for each other and that allows the connections between their characters to carry the honest sentimentality present in several scenes.

The handcrafted feel of the Coscarelli-directed films extends to Hartman’s direction. Aided by the original PHANTASM theme composed by Fred Myrow and Malcolm Seagrave, Hartman reaches back to the tone of the first film when it matters most, giving Mike, Reggie, and Jody two very different, but equally emotional hero scenes that drives home the feeling that these men are family who really would do anything to protect each other.

Where RAVAGER runs into issues is with its attempts to reach for epic action sequences in the “wasteland” portions of the film. The digital cameras available for the very low budget that the film had are unforgiving to visual effects. This shows in many cases, with some unnecessary CGI fire and blood that looks faker than normal—especially when placed next to scenes that feature some good practical effects. The ambition that Hartman has in these sequences is commendable, but the effects just are not there to pull off what he wants.

The lack of a proper effects budget also seems to have impacted a quickly dropped storyline that seemed intended to give fans a big showdown moment between our heroes and The Tall Man. The action beats of this hastily wrapped-up segment are stymied by the effects, the odd story choice to give a newly introduced supporting character the face-off with The Tall Man instead of Mike or Reggie, and Scrimm’s seeming inability to physically do much in his weakened state (but he still has that imposing glare and melodious voice, nailing two perfect monologues).

Not to be too much of an apologist, but the issues I have with the rough effects work and some of the digital cinematography are the same issues that almost all indie films have at this budget. If you are bothered by such details, RAVAGER almost certainly will leave you disappointed. But for me, those problems are easily over-looked flaws in a film that packs an emotional wallop.

Of course, the only audiences who will feel that emotional wallop are hardcore PHANTASM fans (if you haven’t yet figured it out, I am a phan). But that is probably how it should be. Despite managing an impressive five films, the PHANTASM franchise never crossed over (even with the studio-backed PHANTASM II) into the mainstream. Always having Coscarelli as a guiding hand and returning the core cast members for all but the second film made the series feel like a family-run business with a loyal clientele. And that clientele is whom RAVAGER is catered to.

After watching RAVAGER the first time, my conclusion was that it felt a little like an officially sanctioned fan film. I enjoyed it enough to consider it a celebration of the series, even as I decided that OBLIVION was still the proper ending to the series. After the second viewing, my thoughts on how it fits into the series are more complicated. In a way, it feels like RAVAGER and OBLIVION are two sides of the same coin. Where OBLIVION is all about wrapping up Mike’s storyline, RAVAGER is very much a tale about how Reggie deals with the inevitable effects of aging. Both movies are a little more serious than expected and provide beautiful grace notes after their plots have been wrapped up. I think when I return to the films, it will be impossible to watch OBLIVION without watching RAVAGER and vice versa. Together, they provide the closure needed for longtime fans while leaving plenty of unanswered questions to chew on long after the end credits are over.

Now if you will excuse me, I have to go mull over thoughts of my own mortality. The PHANTASM series may have come to an end, but I will always keep an eye open for The Tall Man. 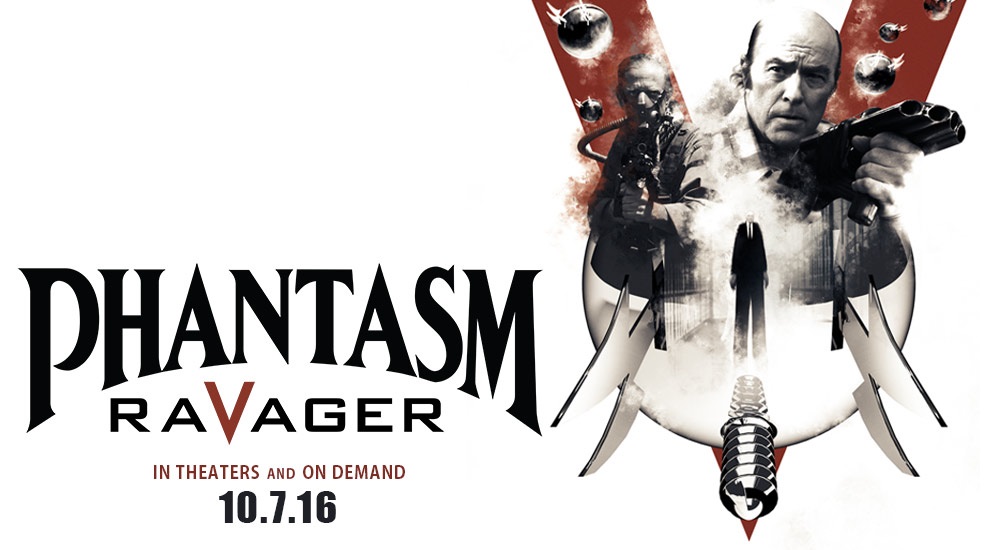