For myself—and, I suspect, many others raised from afar by the Satellite of Love crew—Thanksgiving is synonymous with Mystery Science Theater 3000. After making its KTMA debut on Thanksgiving Day 1988, the show often staked its place on the holiday in later years with semi-regular marathons that would run on Comedy Central (and, later, the Sci-Fi Channel) throughout the 90s. Ahead of the show’s glorious return to Netflix, Shout Factory resumed the tradition, which is set to continue this year on the label’s streaming channel (although it may be bittersweet with Netflix’s very recent cancellation). And while adulthood means I can no longer completely zone out in front of the TV for hours on end with Joel, Mike, Jonah, and the Bots, I will carve out some time during the week because Thanksgiving just isn’t the same without the wisecracking riffs, boisterous hijinks, and cinematic turkeys found aboard the Satellite of Love.

But more importantly, I’m also here to carve out time to show an appreciation to the show, not just for becoming a holiday staple for most of my life, but also for doing so much more. My obsession with MST3K came at a formative time in my life: the tail end of elementary school into middle school, right when my comedic sensibilities were really taking shape. To this day, I the show’s droll, idiosyncratic humor speaks to me in a way most other comedy doesn’t. I love that it runs the gamut from genuine, erudite wit to sophomoric non-sequiturs; what’s more, I’ve found that its humor is somehow funnier completely out of context, as famous riffs become something like a secret handshake among fellow MSTies. Perhaps most importantly, the show has always had a sense of humor about itself, almost as if its signature midwestern niceness doesn’t allow for any mean-spiritedness whatsoever, even towards the absolute worst travesties the Mads unleash upon the crew.

And that, I think, is the key to what I’m most thankful for here: MST3K taught me how to appreciate movies. Not just some movies, but all of ‘em: the good, the bad, the weird, and even the most befuddling dispatches from the nether regions of cinema. Most of the films on the show were (and continue to be) easy targets, but Hodgson and his successors never eviscerated them from a place of contempt. They didn’t condescend: they knew damn well what a rickety operation they were in their own right. It started as a public access station boasting sets cobbled together from household items, for crying out loud. As such, the show’s insistence that viewers should “really just relax” extends towards the movies themselves. Yes, many of these movies are not really fit for human consumption, but if they were to ever be enjoyed, surely it’d be with some gentle yet sharp mockery. There’s always been something delicate to the MST3K approach that allowed its targets to keep its dignity intact, if ever so slightly. I’m reminded of Dryden’s thoughts on satire: “there is still a vast difference betwixt the slovenly Butchering of a Man, and the fineness of a stroke that separates the Head from the Body, and leaves it standing in its place.”

Because that’s the cool little secret behind MST3K, and it something that’s largely lost on its Youtube-era imitators: these movies were left standing (however wobbly) and capable of working their idiosyncratic charms despite—okay, because of—the riffing. The show has always been careful to give the films just enough space to unfold on their own terms. I’m not sure when I first noticed it—if, indeed, if I ever really realized it all. At some point, though, I found myself compulsively re-watching episodes not only for the jokes but for the movies themselves. I recognized that each of them had something to offer, whether it was a wild plot, chintzy effects, bizarre performances—basically, all of the stuff that I would go on to appreciate in the kind of movies I would continue to seek out on my own once MST3K wasn’t around for guidance after 1999.

I don’t think that would have been possible without the show’s good-natured approach in the first place, which taught me that these weird, wild movies were fascinating cult objects—not just trash fit for ridicule. Hell, several films featured on the show have gone onto become genuine personal favorites: THE BLACK SCORPION, MITCHELL, ZOMBIE NIGHTMARE, THE INCREDIBLE MELTING MAN, LASERBLAST, THE THING THAT COULDN’T DIE, SQUIRM, various kaiju movies, and, yes, even MANOS: THE HANDS OF FATE. Even though I was a Monster Kid before encountering MST3K, this show revealed all of the crooked, offbeat paths cult cinema has to offer. Whatever gaps the video store left were largely filled by this show (and Joe Bob Briggs, but that’s a different story altogether), which exposed me to so much stuff I wouldn’t have been lucky enough to stumble upon otherwise.

All the laughs MST3K also provided almost feel like an added bonus at this point since it’s fair to say my life may have been significantly different without it. I’d like to think I speak on behalf of all of MSTies when I extend my gratitude towards the all of the Best Brains crew, past, present, and future for, well, everything. Here’s to a nice, relaxing holiday week full of hearty meals, minimal family drama, absolutely no Hamdingers, and plenty of time spent in the company of our favorite hosts and their robot companions. 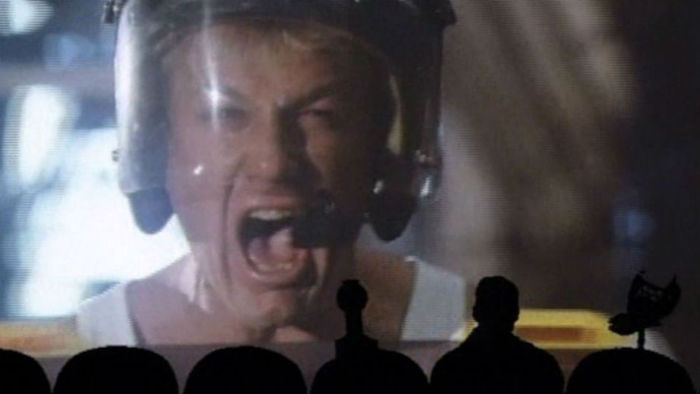