Home  ⁄  The Wire  ⁄  [GO BANANAS!] THE WEIRDEST MONKEY MOVIES EVER MADE 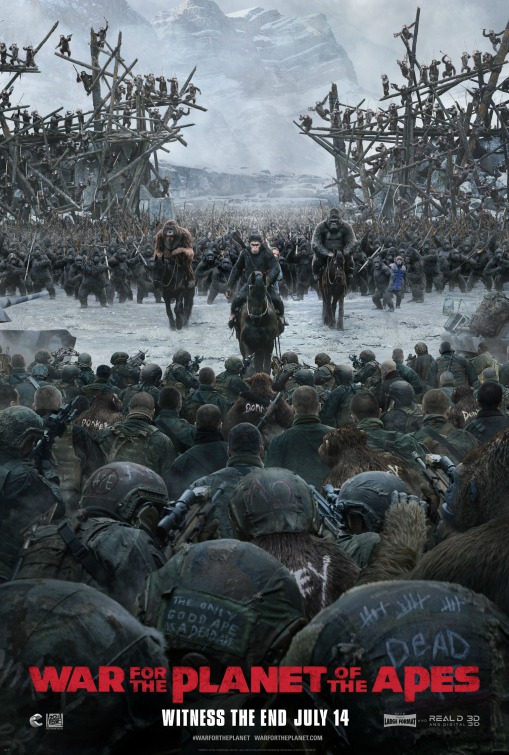 With the release of this week’s WAR FOR THE PLANET OF THE APES, the official APES franchise tally arrives at nine entries, beginning with the original 1968 masterwork and including Tim Burton’s much-bellyached-about 2001 attempt.

Our primate relatives, of course, have long inspired filmmakers and thrilled movie audiences, from the giant gorillas of KING KONG (1933) and MIGHTY JOE YOUNG (1949) to the orangutan antics of EVERY WHICH WAY BUT LOOSE (1978) and DUNSTON CHECKS IN (1996) to supremely cool simians on the order of the Flying Monkeys in THE WIZARD OF OZ (1939) and the apes at the dawn of evolution in 2001: A SPACE ODYSSEY (1968).

For every filmgoer who ever wished for a chimp chum or a baboon buddy to swing with, here’s a ferociously furry film fest. 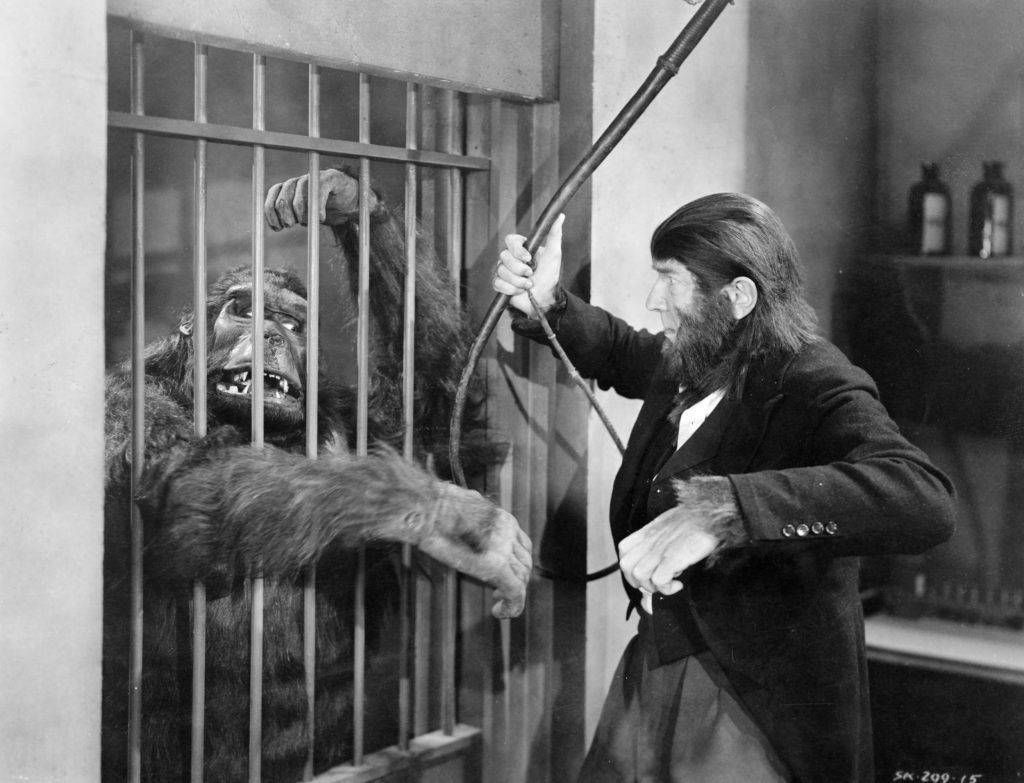 Mad scientist Bela Lugosi turns himself into a half-man/half-ape monstrosity and tools around doing crimes with his best buddy, who happens to be a gorilla (actually, of course, a guy in a gorilla costume). 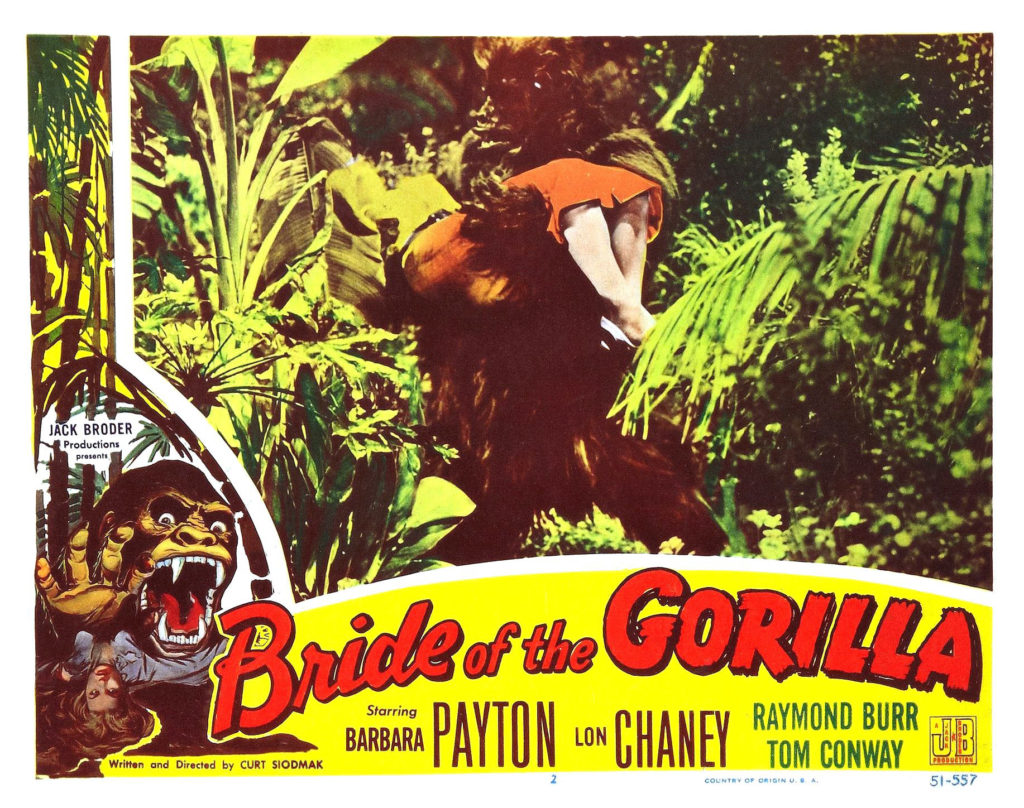 Raymond Burr plays a ruthless South American plantation employee who kills his boss to make a play for the dead guy’s wife. A voodoo priestess turns Burr into a gorilla, werewolf-style, meaning he changes back in daylight and acts like everything’s cool. Burr’s ape film canon went 3-D in 1953 when he plays a circus owner in GORILLA AT LARGE, which was popularly shown on TV during the ’80s. 7-Eleven provided proper 3-D glasses in most areas. New York City residents had to drop by the electronics chain Crazy Eddie. 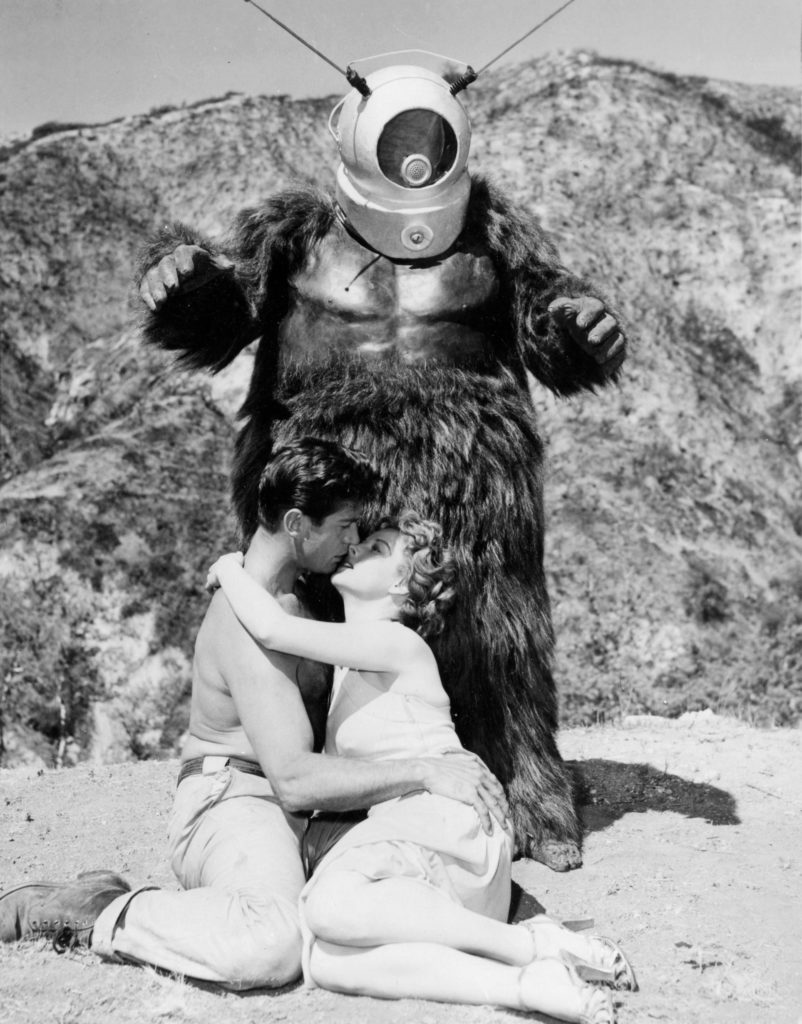 A legendary “turkey,” ROBOT MONSTER concerns a mechanical being from the moon sent to earth to plan an alien conquest. Alas, “Ro-Man,” as he’s called, falls in love with a hu-man wo-man. Shot in four days for a cool $16K, ROBOT MONSTER ran into trouble when director Phil Tucker couldn’t afford a robot costume. Thus, he called George Barrows, one of Hollywood’s hardest-working gorilla suit guys, to approximate the effect with an ape-get up and a deep-sea diving helmet.

Japanese cinema has expressed fascination with King Kong since the popular 1933 comedy short, Wasei Kingu Kongu. In 1962, Toho Films properly honored Kong by pitting him against their own “King of the Monsters” in KING KONG  vs. GODZILLA. Five years later, that Kong returns in King Kong Escapes to battle against a robotic version of himself, Mecha-Kong.

NIGHT OF THE BLOODY APES is a sex-and-violence-amped upgrade of the cheap 1969 Mexican horror flick, THE HORRIBLE MAN-BEAST. A crazed doctor transplants the heart of a gorilla into his dying son, transforming the young man in a berserk ape-beast who goes on all manner of gross, gory sprees. Only a female Mexican wrestler can stop the savage monster. Later used as an album title by R.A. the Rugged Man. 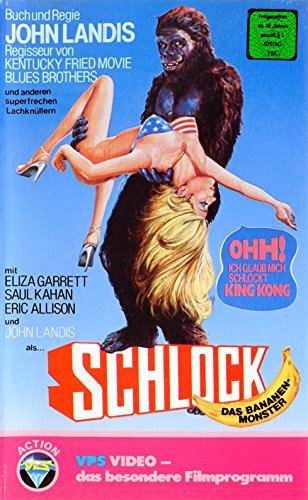 The very funny debut of writer-director John Landis features him in the title role of Schlock, as a prehistoric gorilla who runs wild through sunny SoCal. A blind girl falls in love with him. SCHLOCK also features the first work by Hollywood make-up master Rick Baker. 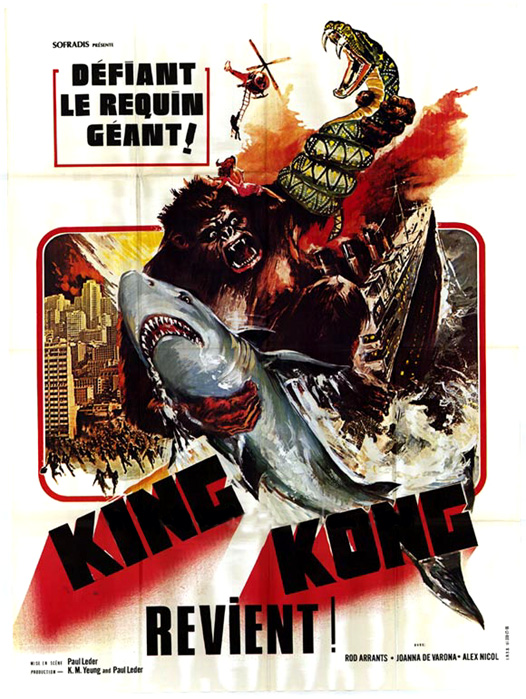 In 1976, the mega-budget Dino De Laurentiis-produced KING KONG  remake inspired a number of nutty rip-offs. A*P*E is South Korea’s contribution. Shot in 3-D, A*P*E features its giant protagonist fighting a great white shark (to simultaneously cash in on JAWS) and flipping the bird.

O TRAPALHAO NO PLANATO DOS MACACOS aka BRAZILIAN PLANET OF THE APES; THE BUNGLER ON THE PLATEAU OF THE APES (1976)

A Brazilian spoof of PLANET OF THE APES starring the comedy team Os Trapalhões,” Didi, Dedé, Mussum and Zacharias. It’s what you expect — and in Portuguese.

The British-made QUEEN KONG essentially gender-flips the familiar King Kong saga through the guise of a bawdy sex comedy. Leading lady Rula Lenska became a pop culture punchline around the same time by presenting herself as a well-known international celebrity in U.S. shampoo commercials. One of Johnny Carson’s go-to monologue quips for the rest of the year became, “Who the hell is Rula Lenska?”

THE MIGHTY PEKING MAN aka GOLIATHON (1977)

“Bad” movie director Larry Buchanan casts Jenny Neumann as an anthropologist who discovers a tribe of highly evolved ape. They make her their queen. She makes their jungle dreams come true and, likely, the dreams of anybody who traveled to a theater to see this, too. 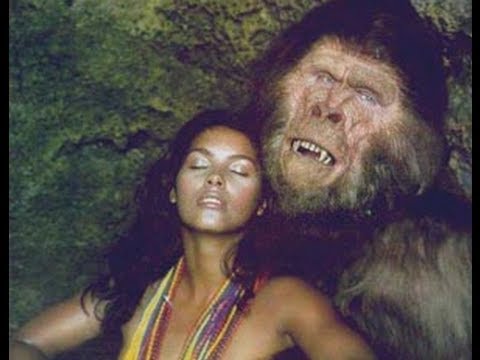 Future Prince protégé Vanity plays one half of a shipwrecked couple. She falls in love with the gorilla who’s tropical paradise they crash on, designed and played by the aforementioned makeup maestro, Rick Baker, in collaboration with special effects guru Rob Bottin (The Thing, Total Recall). If that seems a long way to go for a softcore survival adventure hinged on the kink of interspecies intercourse, it is — but TANYA’S ISLAND proves loony enough for it to make sense.

Kiddie movies don’t come ka-ray-zee-er that Carnival Magic, courtesy of Z-flick champ Al Adamson (Dracula vs. Frankenstein). Carnival magician Markov works with Alex, a super-intelligent chimp who talks. An actual chimp plays Alex. You will believe he can talk — because you simply won’t believe this film is possible at all, especially as you watch it.

Dino De Laurentiis’s nutty, chintzy sequel to his own KING KONG from a decade earlier features Linda Hamilton, hot off THE TERMINATOR, and giant gorilla surgery where Kong gets an artificial heart. It did not spawn imitators. 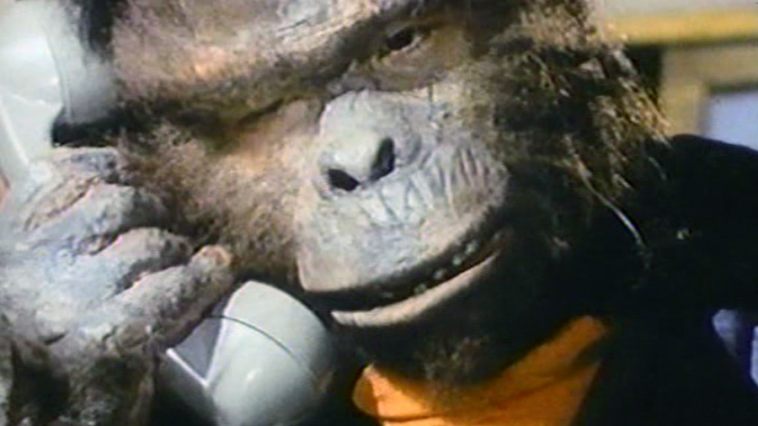 Stitched together episodes of the super-cheap 1974 Japanese TV series Saru No Gundan (Army of the Apes) that became popular when spoofed on Mystery Science Theater 3000. It’s a chest-beating good time, especially without the three loudmouths in the corner of the screen talking over all the best parts (your author knows he is in the minority on this topic).

Horror master George Romero makes a helper monkey look scary in this tale of a quadriplegic man whose simian assistant Ella takes to killing anyone she perceives as a threat to their friendship. It’s pretty scary but, too often, very boring. 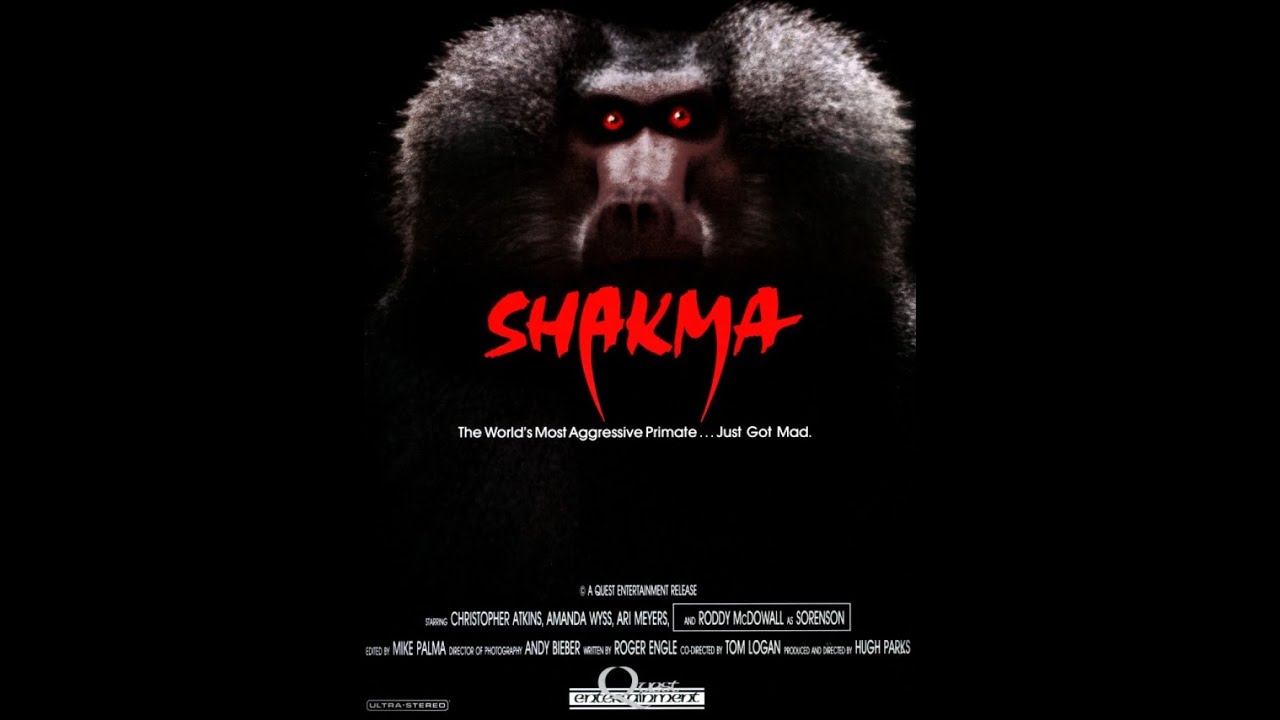 The oddball 1986 horror-action hybrid IN THE SHADOW OF THE KILIMANJARO depicts 90,000 starving baboons attacking a jungle research center. Shakma boils it down to just one baboon — Shakma himself — who launches a one-ape mayhem campaign against his captors. Shakma’s cool. 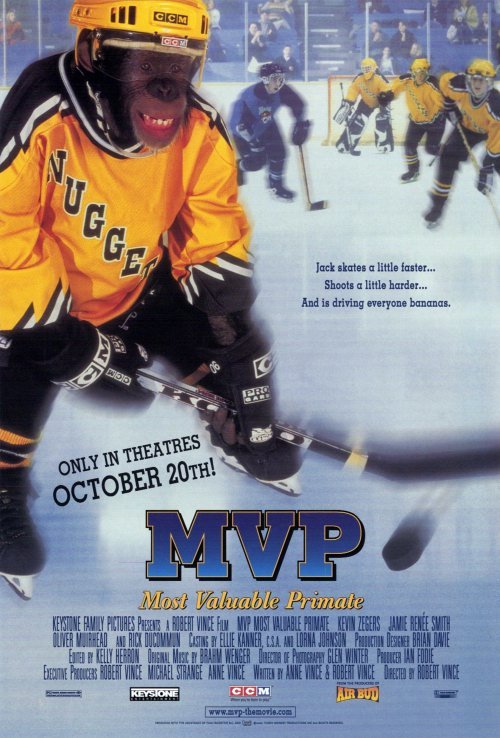 Upping the mechanical chimp who plays baseball in the odd Matt LeBlanc vehicle ED (1996), MVP stars Jack, an actual chimp, who can actually ice skate and play hockey. Jack returns as a skateboarder in MVP: MOST VERTICAL PRIMATE (2001) and atop a snowboard in MXP: MOST EXTREME PRIMATE. 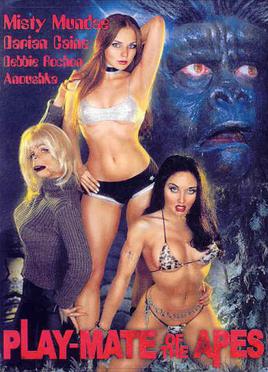 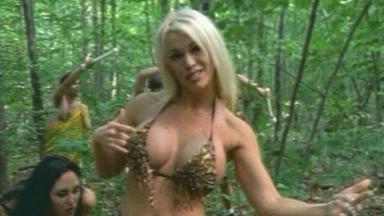 New Jersey softcore studio Seduction Cinema established itself with this spoof, timed to coincide with Tim Burton’s PLANET OF THE APES remake. It also made leading non-monkey-masked performer Misty Mundae into a traditional, scream-queen-esque cult movie starlet. Could Misty have been the last of that kind? 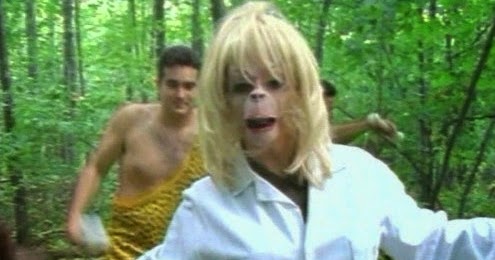