When the era of the superhero film is judged fifteen years from now, Marvel and DC’s output will be looked upon as pretty good—if bland—summer blockbusters. The STAR WARS franchise will be perceived as welcome diversions, but never truly be equal to the stellar filmmaking of the first trilogy, particularly the original film. While the latest entry in the PLANET OF THE APES franchise which began all the way back in 1968 does have a touch of nostalgia filmmaking in it’s D.N.A, the series will be held up as a gold standard in Hollywood, franchise filmmaking. Of all the major tentpole films that crowd multiplexes summer after summer, the APES movies seem to get lost in the shuffle, probably because each film is great, and there isn’t much to debate. WAR FOR THE PLANET OF THE APES wraps up what is arguably the best modern special effects laden series with what is essentially an expertly crafted war drama

WAR opens up with a spectacular battle sequence in a west coast jungle. It’s 2017 and the influence of the Vietnam conflict (as well as the countless) films on the subject can be felt in the films visuals. Director Matt Reeves has an impressive style of action directing. He never crowds the frame with too many “sprites;” the action is clear and defined, visually giving the audience a sense of place as Caesar’s (Andy Serkis) army defends their home from an incoming squadron of humans. The apes emerge victorious and show mercy on their enemies, allowing them to return to their base with a message of peace. This is a miscalculation on Caesar’s part as it leads to a bloody confrontation at his home, which sends him out on a personal mission of revenge against The Colonel (Woody Harrrelson).

Despite being told by their leader to escape to the desert with the remaining apes in the tribe, Caesar is joined on his quest by loyal soldiers, Maurice (Karin Konoval), Luca (Michael Adamthwatie), and Rocket (Terry Notary). From here, WAR becomes an “apes on a mission film,” with the foursome traveling across the American landscape to The Colonel’s base. The apes end up adopting a young human (Amiah Miller) who becomes part of the team. 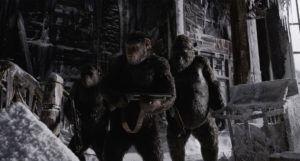 The film thankfully doesn’t just retread the massive action set pieces of the previous sequel. Reeves and co-screenwriter Mark Bomback instead lean heavier into character drama as Caesar wrestles with his need for revenge, ape law (ape not kill ape), and his place as a leader. The APES films are certainly the heaviest of the summer blockbusters and it’s notable that 20th Century Fox allowed Reeves and his team to commit to a film that has an outstanding amount of subtitles as the apes grunt and sign for the first half of the film recalling 1981’s QUEST FOR FIRE. Andy Serkis of course steals the show as Caesar, his voice recalling the stoic timbre of Franco Nero’s Cole in ENTER THE NINJA (dubbed by Marc Smith). In the age of CGI, a lot of that sense of movie magic, “how did they do that” is gone when a shot of countless spaceships fills a frame of a Marvel film or even STAR WARS. However the SFX in WAR FOR THE PLANET OF THE APES recalls that wonderment. On one hand the APE effects are so good—paired with a compelling story—but, when you step back and look at what’s essentially a rotoscoped cartoon, it is amazing.

WAR is quite heavy so when Bad Ape (Steve Zahn) shows up, his character is a welcome breath of comic relief. WAR is a pastiche of tough guy cinema recalling THE GREAT ESC(APE), BRIDGE ON THE RIVER KWAI, and countless war movies and westerns. If Serkis’ Caesar is a modern day John Wayne, then Steve Zahn’s Bad Ape is his Dean Martin in RIO BRAVO.

For being the third act of a trilogy, the film doesn’t provide many massive battle sequences and that’s refreshing. Reeves and his team gave audiences more than enough of apes in tanks in the previous DAWN. WAR brilliantly turns into a relatively quiet character piece, but also delivers more than enough exciting set pieces. As I watched the film, I wondered if kids would enjoy this (or if I would have enjoyed it as a kid myself), as it is a darker, more serious film than one normally gets out of a big budget franchise. Then I realized that maybe I’m underestimating young audiences and am therefore part of the problem. WAR FOR THE PLANET OF THE APES is one of the most impressive films of the year and I hope that it encourages franchise filmmakers to take more chances.