FANDO Y LIS is Alejandro Jodorowsky’s first feature-length film, based on a play of the same name by Fernando Arrabal. When it premiered at the Acapulco Film Festival in 1968, a riot broke out over what was perceived to be its blasphemous nature and was subsequently banned in Mexico.

Filmed in black and white and on a very low budget, the film follows Fando (Sergio Kleiner) and his paraplegic lover Lis (Diana Mariscal) as they make their way through a post-apocalyptic landscape searching for the town of Tar, a mythical place rumored to make all of your dreams come true. Along the way, they meet up with a strange cast of characters. They come upon a ruined town where the women try to lure Fando into sex games and Lis is forced to fend for herself. Other scenarios involve people bathing in mud, where Fando makes Lis stand on her own for a while; a group of cross-dressers who dress Fando and Lis in each other’s clothing in a surreal gender bending scene; and an unsettling scene where Fando undresses Lis and allows strange men to touch her naked body. One sequence involves four old women playing cards, with the winner of each hand getting up close and personal with a young, buff man. (I can’t say why, but for me the depravity of this scene had a similar disturbing feel to Pier Paolo Pasolini’s SALO, OR THE HUNDRED DAYS OF SODOM, which wasn’t released until 1975.) By the time the film comes to its conclusion, Lis has been transformed into a Christ-like figure. 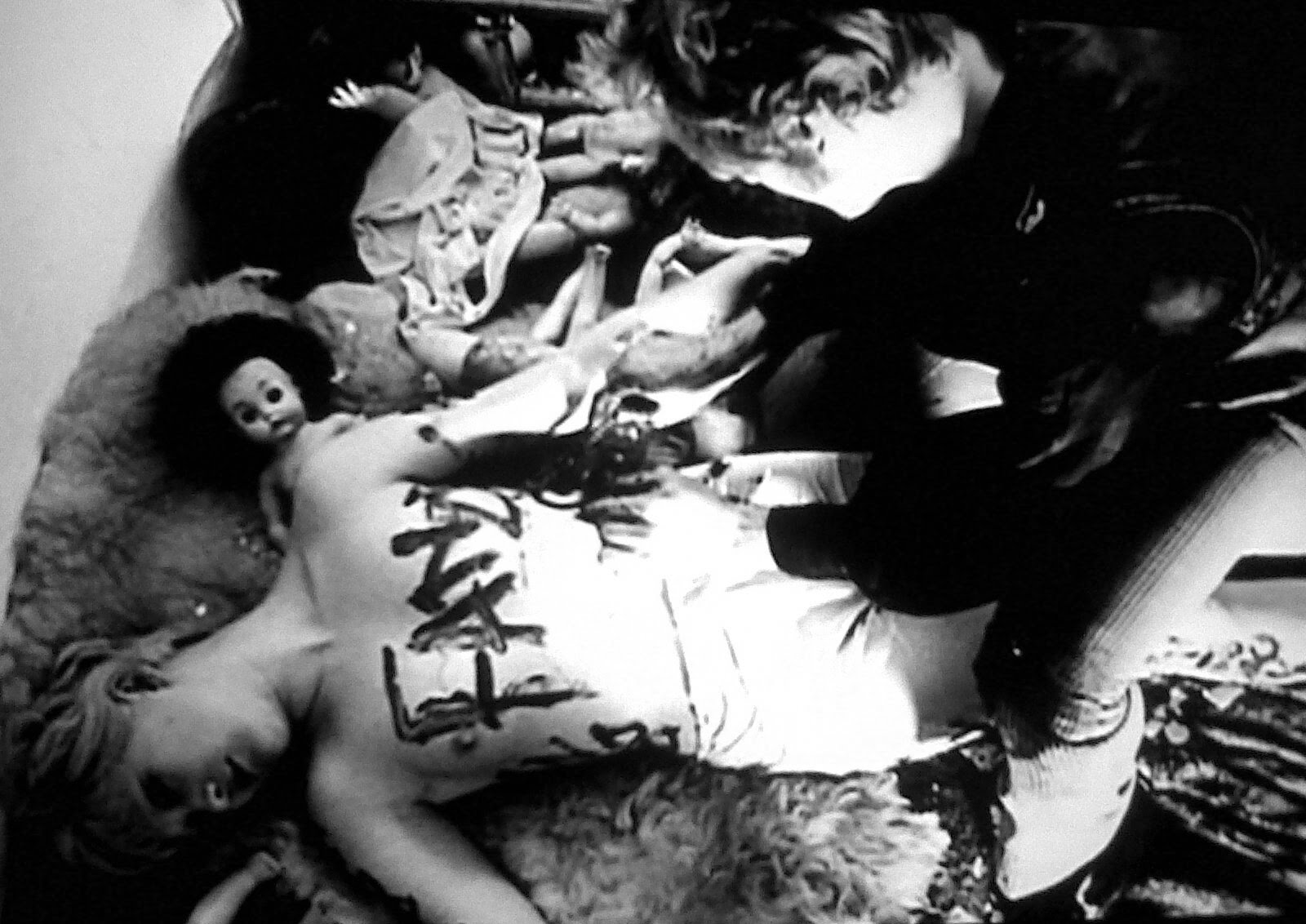 I have to say at the outset that I love Jodorowsky’s films. I find them surreal and beautiful and quite spiritual, and FANDO Y LIS is no exception. Where Jodorowsky is known for his use of bright colors, the black and white employed in this particular film only accentuates the bleakness of the landscape, and the temptations that our protagonists are subjected to throughout their journey. What was initially ascertained as blasphemy by the rioters in Mexico is, in my opinion, Jodorowsky’s loving interpretation of Christian beliefs. I feel the post-apocalyptic landscape is a metaphor for Purgatory and the legendary town of Tar that the couple are trying to find is, in fact, Heaven. At times Fando is abusive toward Lis, threatening to leave her alone to fend for herself, which she cannot do. Lis is fragile and quite helpless without Fando. This treatment somewhat calls to mind Peter’s denial of Jesus Christ, and even Judas’ betrayal.

There are some flashback scenes of Fando and Lis’ traumatizing childhoods. Fando’s in particular begins with a meeting with his dying mother and taking him back to his time as a child when his mother was revered as celebrity. These sequences are almost a precursor to Jodorowsky’s later film SANTA SANGRE (1989). Lis’ transformation into the Christ-like figure begins with giving her blood to feed a stranger they happen upon in their travels, and completes itself with a group of people feeding on small slivers of her skin as she lays dying. This is obviously a reference to the consumption of the body and blood of Christ from the Last Supper and the ritual during the Catholic Mass.

The stunning direction by Jodorowsky and dream-like cinematography of Rafael Corkidi—who also worked on EL TOPO (1970) and THE HOLY MOUNTAIN (1973)—combine to make this film a surreal but beautiful homage to Christianity and a statement on modern society’s moving away from spirituality and embracing of—in some cases—hedonism. However, others will surely have a different interpretation, as I’m sure is the director’s intention.

I highly recommend FANDO Y LIS for those who have never seen a Jodorowsky film, as it is more accessible than some of his later films.