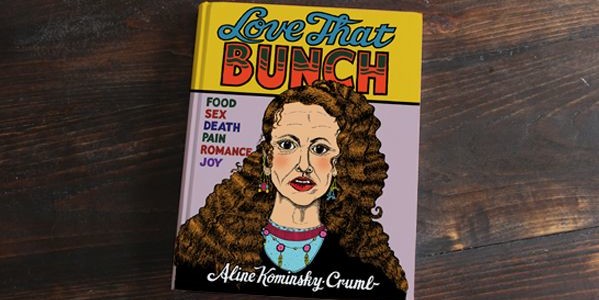 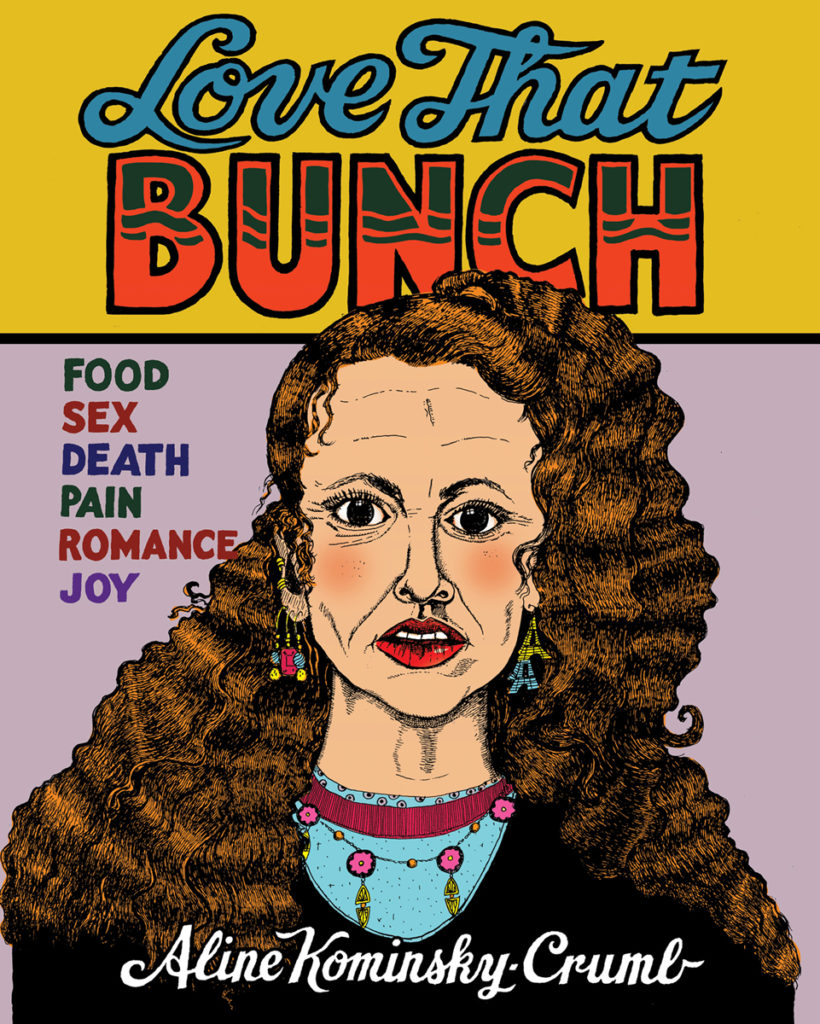 Don’t look now, but Aline Kominsky-Crumb is having what the media has, in recent years, come to call “a moment” — and those of us who have been following her extraordinary cartooning career over the decades can only say: “It’s about fucking time.”

Through no fault of her own, Kominsky-Crumb has almost always operated in her (in?) famous husband’s shadow to one degree or another, and while the arcs of their respective careers have definitely either dove-tailed or run parallel to each other from time to time — they were both involved with (hell, they both edited, albeit at different points in its run) legendary underground anthology Weirdo, they collaborated on Self-Loathing Comics back in the 1990s, etc. — in truth their work, even though they both have figured as prominent characters in each other’s strips, focuses on entirely separate sets of concerns. Sort of. 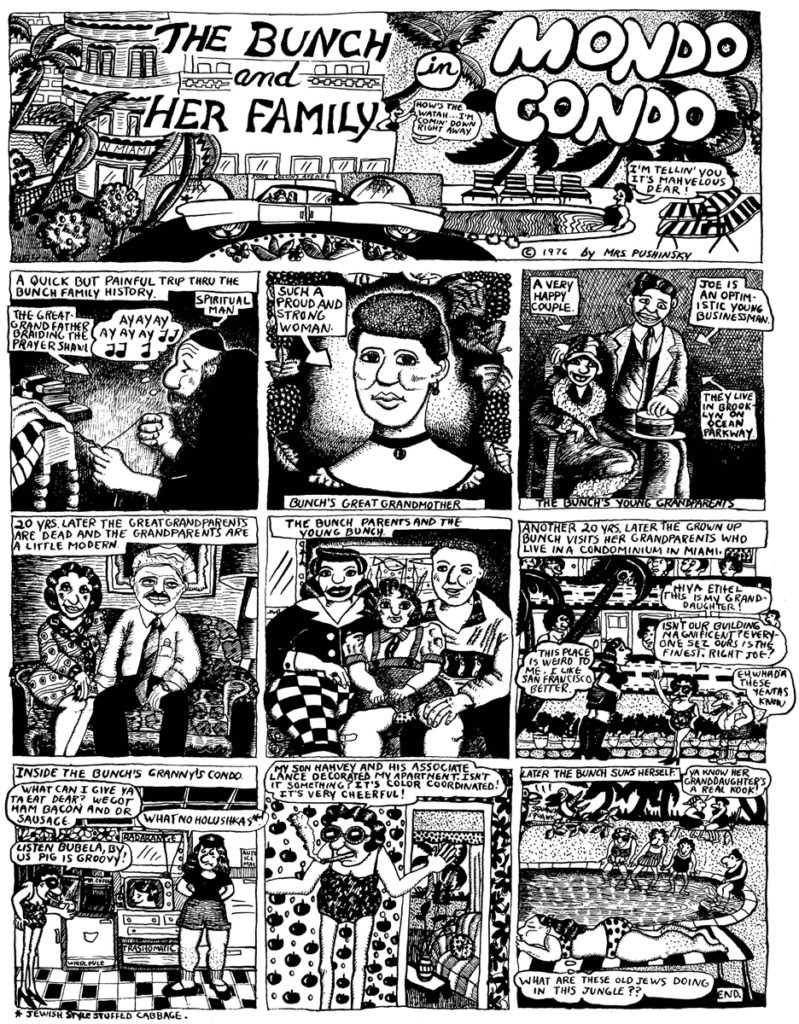 Okay, yeah, their “co-starring” book referenced self-loathing in its title for a reason, but unlike Robert, Aline has, going all the way back, been more focused on how family, in particular, turned her into the entirely-relatable psychological “mess” that she is, and her cartooning confessionals have always felt more cathartic than her old man’s pained, at times even painful, exorcisms of psycho-sexual neuroses. In short, she seems far and away the more likeable of the pair.

But hey – don’t take my word for it, Drawn + Quarterly has just released a mammoth hardback collection of her strips from 1976 to the present, Love That Bunch, which nearly doubles the size of the 1990 softcover volume of the same name, and it’s all the evidence you need that Kominsky-Crumb’s cartooning stands alone as a vibrant and necessary body of work in its own right. This, in short, is as definitive as it gets — and that’s cause for celebration. 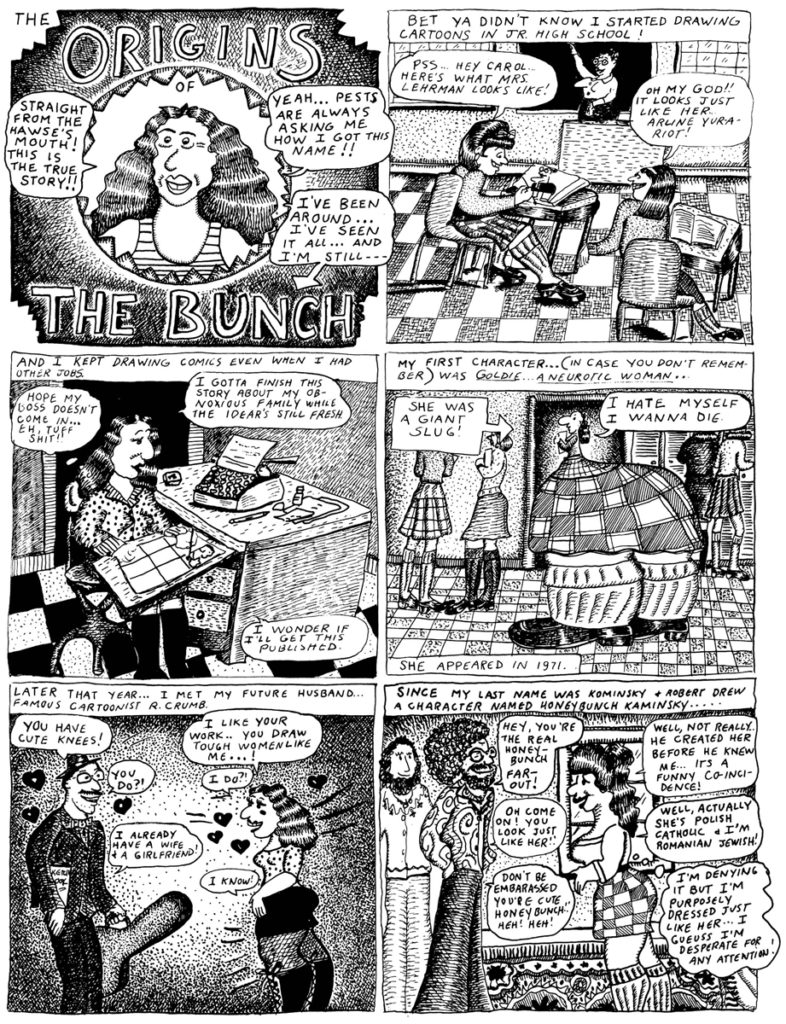 Kominsky-Crumb and(?) her alter-ego protagonist, The Bunch, have been through a lot over the years, from surviving a dysfunctional Lawn Guyland upbringing to indulging in hippie excess to living very nearly “off-the-grid” (before it was called that) to marriage to motherhood to moving to France to grandmotherhood — reading this book offers so much more than the average autobio comix experience, most of which focus on a particular time period or series of formative experiences in a given cartoonist’s existence. Love That Bunch is the (warts-and-all, of course) chronicle of a life, related in fits and spurts when time permitted over the course of forty-plus years. And while so much has changed for Bunch/Kominsky-Crumb, there are number of wonderfully idiosyncratic “quirks” that remain consistent throughout.

Misspellings, for instance, are a big one, and not all of them intentional. Horniness. Body shame/insecurity. A kind of creative restlessness that endures even during the more contented periods of her life. An “old before her time” mentality. A perpetually satirical outlook. All delivered with a kind of rushed immediacy (and I don’t mean that as an insult in any way, I know Kominsky-Crumb usually spends a lot of time on her strips, but they always feel very nearly “instant”) that somehow never loses its conversational, self-deprecating tone. Don’t ask me how that works, and by all rights maybe it shouldn’t, but it absolutely does. 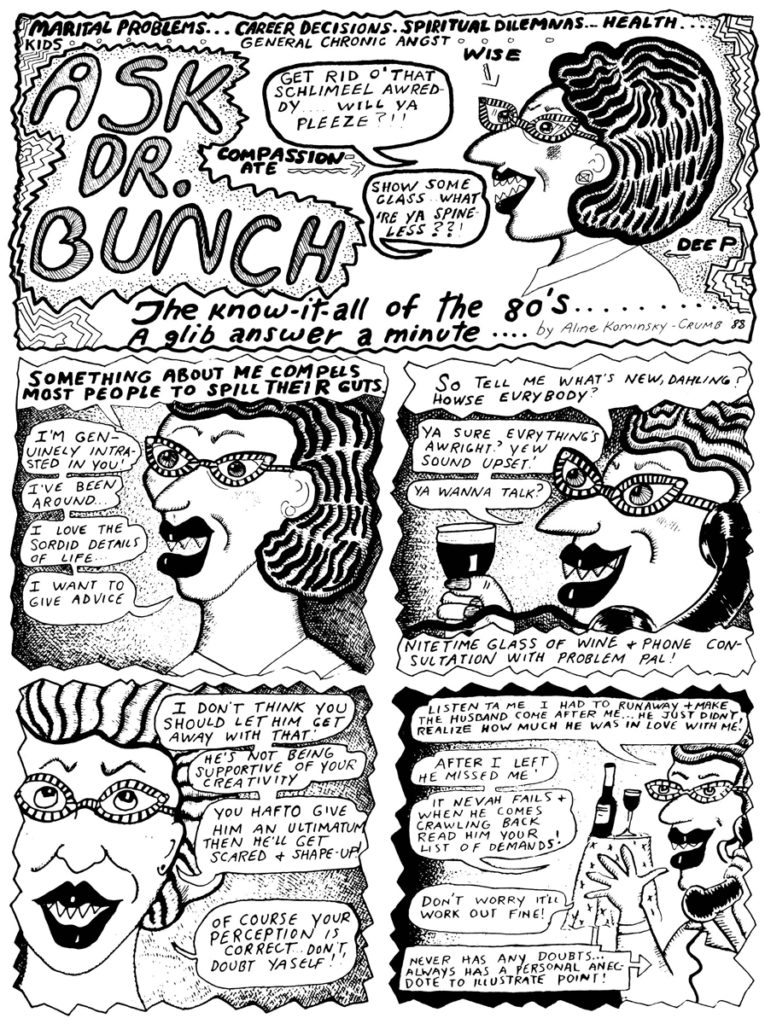 Honestly, the toughest task you’re going to have in relation to this book is determining which strips are your favorite. Everyone agrees that “Of What Use Is A Bunch?” is an all-time classic, a pioneering entry in the history of the women’s underground, but “Up In The Air With The Bunch,” “Sex-Crazed Housewife,” and “The Schlep Set” are all favorites of yours truly, and you’re sure to have your own depending on whether or not you’re more “into”  (somewhat) exaggerated reminiscences of Jewish family life, tales of “wild years” partying, or ruminations on mid-life – and what comes after. I never say this, but in this case I will, and without hesitation at that — there’s something here for everyone.

Kominsky-Crumb has her critics, to be sure. There have always been those who contend that she “can’t draw,” for instance, and those who are understandably less-than-comfortable with her history of sometimes-curt dismissal of her husband’s critics, particularly his feminist critics. The latter is beyond the scope of what I have the time or inclination to get into, but I will say that many people who take her to task for this make some very valid, very cogent points. The folks who are “down on” her art, though, have absolutely no idea what they’re talking about — this book shows her adopting, and succeeding at, any number of highly-personal styles (not all of them in any way “primitive”) that perfectly complement the stories she’s telling. In short, she’s a master of her craft, and Love That Bunch is a fitting, and long-overdue, overview of the career of someone who may very well be the most under-appreciated cartoonist of her time — but hopefully won’t be any longer.