Home  ⁄  The Wire  ⁄  [GRINDHOUSE COMICS COLUMN] ‘AND NOW, SIR – IS THIS YOUR MISSING GONAD?’ BY JIM WOODRING 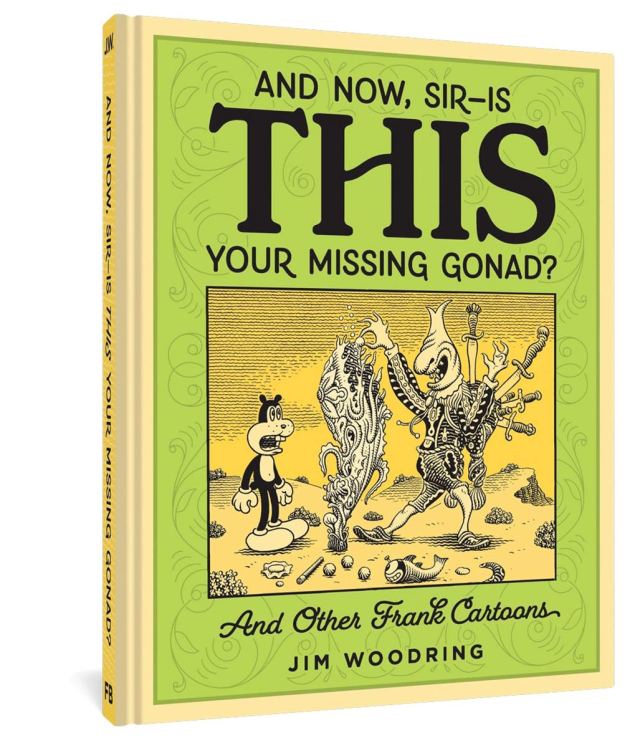 It’s always a tricky proposition to know what to say about Jim Woodring’s work simply because the depth and scope of his creative vision is both deeper and wider than the ability of mere language — even superlative-laden language — to keep up with. Which, yeah, is a roundabout way of saying that so much has been said about him already that there’s now much new to say — but then he comes out with a new book, and you figure that it would be a shame to ignore it just because you’re bound to say “it’s great, you should buy it.” So we’ll get that part out of the way first and see where things take us.

To that end, then: Woodring’s got a new book out from Fantagraphics, a handsome  hardcover segmented into color-coded and thematically-linked pseudo-chapters called And Now, Sir — Is THIS Your Missing Gonad?, and it’s weird, wild, and wonderful in equal measure — in addition to being breathtakingly well-illustrated and pretty goddamn funny. It’s great, and you should buy it. But it’s also terrifying. 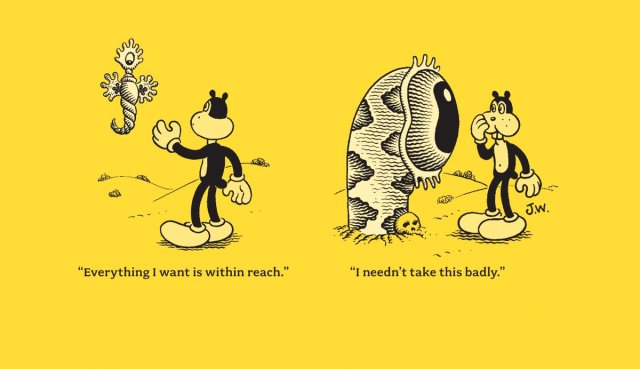 Here’s the thing, though: Unlike other titles set in Woodring’s fictitious world known as The Unifactor, this doesn’t present a story, but a series of one-off cartoons (some get a quarter page, some half, others a full page, and others still the full two-page “splash” treatment) drawn over a ten-year period from 2009 to 2019 for, if the book’s promo blurb is to be believed, the cartoonist’s own “private amusement.” Natural follow-up question: So, sketchbook stuff, then? Answer: They’re not sketches, that’s for sure, and you can make a pretty strong argument that everything Woodring creates is for his “private amusement,” even if it’s for public consumption, so — I dunno, I guess if I were to be forced to classify these as something, as anything, it would probably be “disquieting existential single-panel gag strips channeled through an otherworldly consciousness that really knows how to draw.”

Yeah, that works. And so does this book, but in that same decidedly off-kilter way that the exploits of Woodring’s recurring cast of characters — Frank, Pupshaw, Pushpaw, Manhog, et. al. — always work: namely, by pointing out the absolute and borderline-calamitous uncertainties and hypocrisies that make up the project of human existence by blowing them up entirely while also not actually referencing them in any way. These comics will make you chuckle and make you tremble in equal measure, sure, but it’s damn hard to say why. They’re absolutely alien on the surface, entirely relatable beneath that surface, and absolutely alien all over again beneath that. As such, nothing about them should work — but it’s just as true to say that they can’t help but do anything else. 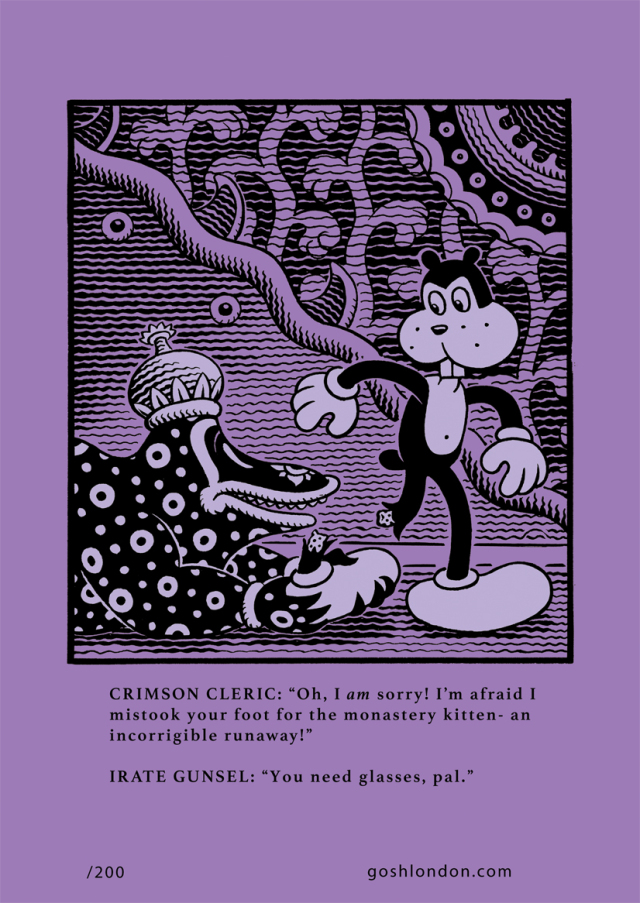 A number of these cartoons have, in fact, seen print in locations various and sundry, but usually as illustrations only — for this edition, however, Woodring (or, if you want to be precise, an entity known as Walter Foxglove, The Smartest Artist) has paired them with the captions that were originally created alongside/concurrent with them and, as you’d no doubt expect, their presence doesn’t “clear things up” in the least, and thank goodness for that. No, instead they up the ante, challenging readers to discern not so much how the hell they relate to the images they appear underneath (or, on occasion, alongside), but why Woodring chose the precise wording he did to extrapolate upon his drawings. More often than not the whole thing feels right, so that’s well and good, but there’s always something entirely off-its-axis about it — both in relation to how the human mind works, which is frankly expected with all things Woodring, but also (and even) in relation to the loose and unstated non-dictates of how things “work” within The Unifactor itself. It’s a double-mindfuck when you consider it in those terms, then, but it’s also the sort of double-mindfuck that you couldn’t conceive of as being any other way — so maybe it’s not even a mindfuck at all. And maybe over-analyzing it doesn’t lead to greater understanding, but only greater confusion — and, of course, it’s all plenty confusing enough as is. 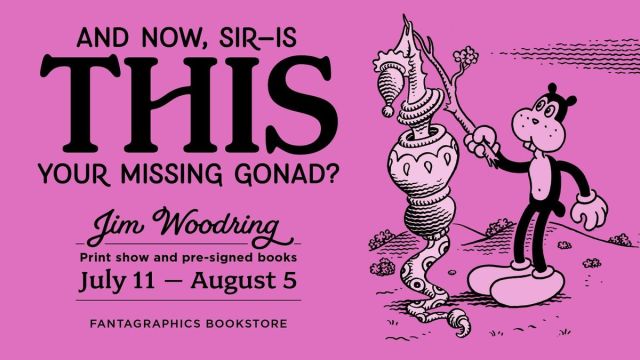 Which, as you can no doubt surmise, isn’t meant as a criticism in any way. The bizarre and always-unpredictable nature of Woodring’s imagination is every bit as crucial to the success of his cartooning as his sheer drawing prowess is. And in And Now, Sir — Is THIS Your Missing Gonad?, he shows everything that makes his work unlike anything else over and over again in succession — the cumulative effect of which is to leave you reeling, bemused, flummoxed, and always hungry for more.