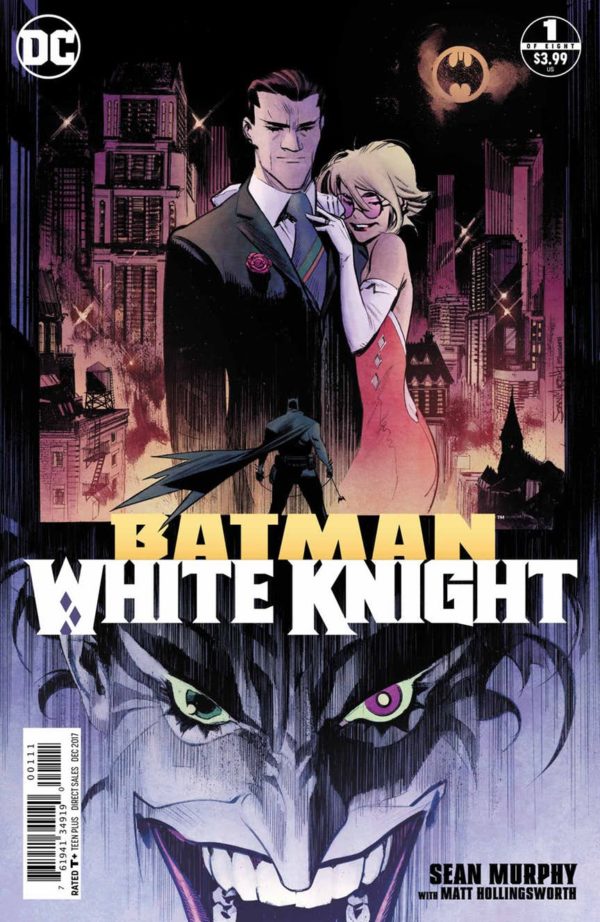 Since completing his widely-acknowledged masterpiece, Punk Rock Jesus, Sean Murphy (take or leave the Gordon as you please) has divided his time between projects worthy of his talents (The Wake), projects obviously unworthy of it (Chrononauts), and projects that could have been worthy of it had they not descended into onerous and heavy-handed diatribes against techno-societal problems that literally every thinking person is already damn well concerned about (Tokyo Ghost). He’s brought his “A game” to all of these various endeavors — he always does — but even stellar artwork isn’t, at this point, enough to save, say, yet another lackluster developed-with-both-eyes-fixed-on-Hollywood-exploitation Mark Millar “idea.” What we’ve all been hoping to see, of course, is a new book, in whatever format, both drawn and written by Murphy, since we’re fully aware that he can do both, and the moment has finally arrived with the debut of his much-anticipated Batman: White Knight eight-parter from DC. Plenty of reason to be excited, right?

So it would seem — unencumbered by “regular” continuity in these pages, Murphy should, in theory, really be able to cut loose in this comic and tell a hermetically-sealed story that plays by its own rules. What’s past is prologue, sure, but not an anchor here, and so in White Knight, The Joker is definitively Jack Napier, Bruce Wayne is considerably more warped in the head both in and out of the cape and cowl, Gotham has gone to hell even by Gotham standards, and the obviously symbiotic relationship between the Dark Knight and his greatest adversary, replete as it is with barely-sublimated love, at the very least, perhaps  even a dose of homoeroticism (okay, forget the “perhaps”), is spelled out in plain language rather than “hinted at” as it has been more or less ever since the days of Grant Morrison and Dave McKean’s Arkham Asylum. And therein, somewhat surprisingly, lies the problem. 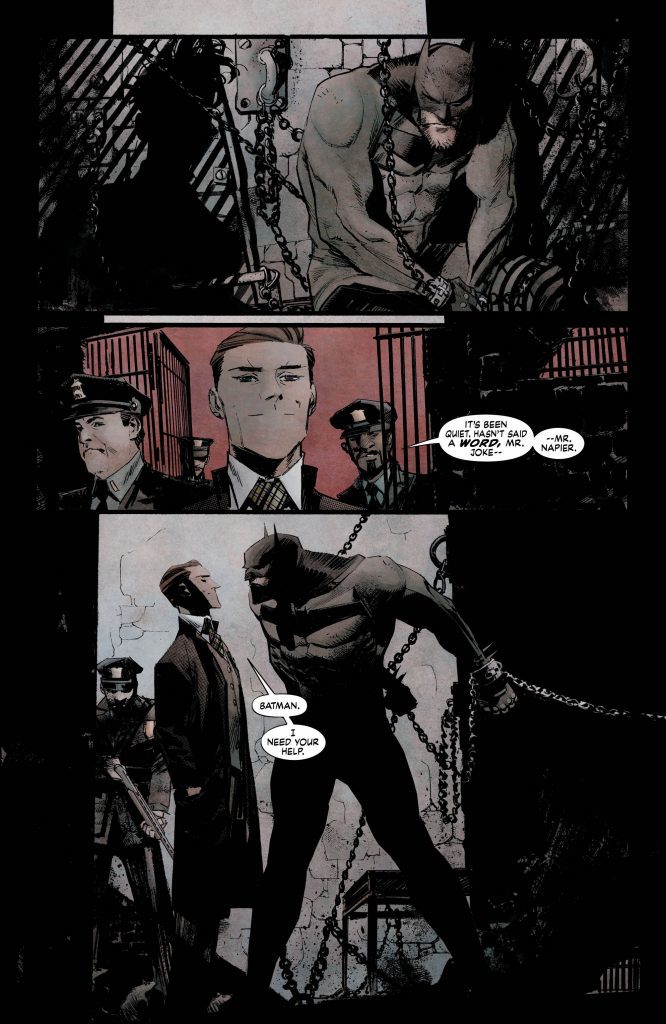 The basic premise of this “alternate universe” narrative has the potential to be intriguing enough on its own merits — Batman’s locked up in Arkham while The Joker is apparently “cured” and running the city, now how did we get here? — but Murphy is better than the borrowed gimmicks (a Frank Miller-esque “out of control” Batman, a Batmobile chase scene right out of Nolan’s first flick) and, even more crucially, heavy-handed expository dialogue that he leans on so heavily here. Scott Snyder and Greg Capullo re-established the “love angle” between Bats and Joker in the “real” DCU both smartly and reasonably daringly in the pages of Death Of The Family a few years back, and four or five more pages of Joker extrapolating on it while Batman viciously beats the shit out of him while, of course, denying it all really doesn’t add much to the equation. Now, Batman admitting that he gets off on brutalizing the true object of his affections (sorry, Catwoman, nobody believes this bullshit that Tom King is spinning in the pages of Batman “proper” right now) actually would be a gutsy thing to put front and center, but we’re probably a good two to three decades away from DC editorial having guts enough to come clean that Bruce Wayne is a BDSM “top,” and so what we’ve got here, in a world where the standard — errrrmmm — standards needn’t necessarily apply, is one that hews depressingly, and for my money gutlessly, close to them anyway. Hell, you could make a solid argument that the various “Dark Multiverse” Batmen that DC is rolling out in all those no-doubt-lousy (I’m reflexively suspicious all comics with holofoil-or-whatever-the-fuck-it’s-called covers) Dark Nights: Metal one-shots offer more radically revised takes on the character than Murphy does here. 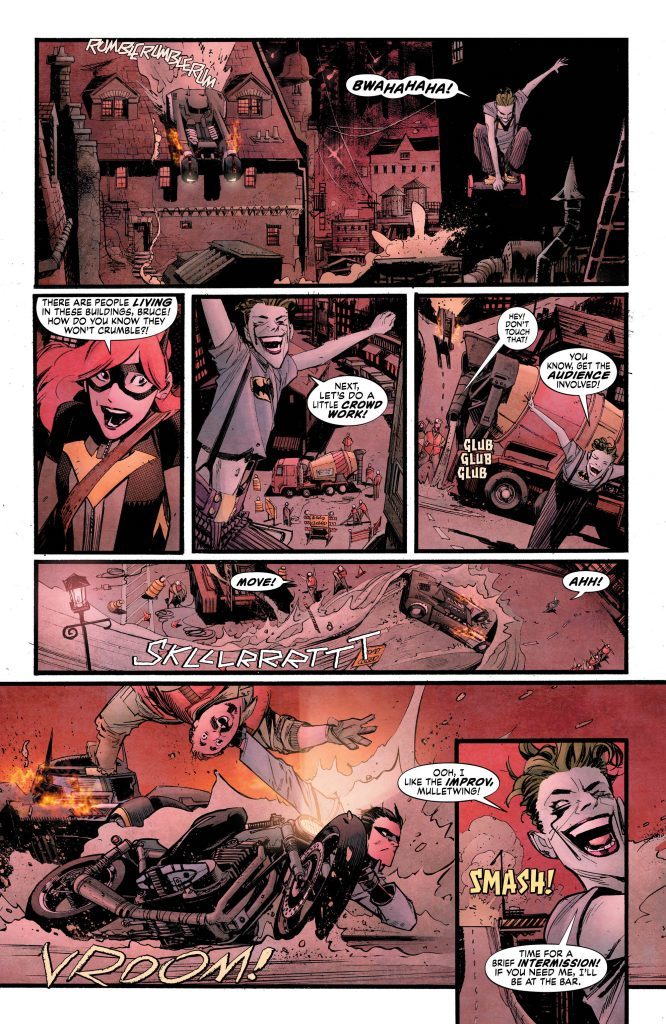 But, hey, a dull cop-out in terms of set-up doesn’t necessarily mean a dull story will follow from it any more than a really inventive and unique one is a guarantee of a great story, right? Unfortunately, when you peel away the Elseworlds-esque layer of this particular onion, there just ain’t much underneath it. Batgirl and Nightwing are alarmed by their mentor’s savage beat-down of the Clown Prince of Crime, sure, and they’re doubly shocked when he starts force-feeding ol’ green-hair a potentially-lethal dose of unknown pharmaceuticals, but they don’t really do much to stop it (nor do the cops), and they’re apparently ready to forgive him pretty quickly when they learn that Alfred has fallen into a coma and Bruce just hasn’t been himself since. Whew, there’s another moral dilemma sidestepped, then, I guess. I think I’m starting to detect a pattern here.

What I will give Murphy all the credit in the world (and maybe even four more bucks of my money since it’s probably good enough to get me to stick around for at least one more issue) for is the art. This is showcase stuff all the way, cinematic in its scope and page layouts, smoothly-flowing and just plain overflowing with energy, hyper-kinetic action, and expressive movement. Matt Hollingsworth’s thick, syrupy, melodramatic colors add the piece de resistance, and the end result is a comic that looks like a multi-million-dollar blockbuster shot by Wally Pfister or Larry Fong or one of the other top-flight contemporary cinematographers. 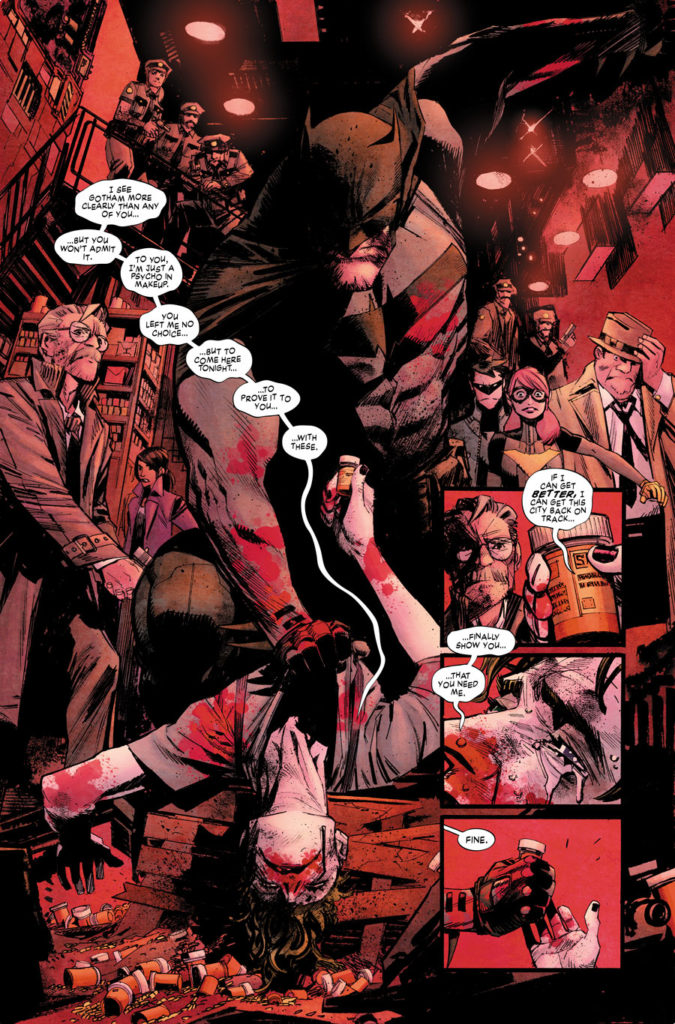 Sadly, though, at least as far as this first installment goes, the Hollywood-blockbuster analogy seems pretty apt in terms of this comic’s thematic depth, as well. There are few pure talents (hell, if any) in mainstream comics as skilled as Murphy, so if anybody can rise out of an early grave that they’ve dug for themselves it’s probably him, but he’s going to have his work cut out for him. Right now, Batman: White Knight looks like nothing so much as a big, snazzy, and expensive version of “What If — Batman and The Joker Traded Places?,” and that’s really about it. Perhaps it’s terribly naive of me (okay, you can strike the “perhaps” here, too),  given the utter creative complacency so readily apparent in more or less all of DC’s publications these days, but I guess I’d been hoping for — even expecting — a whole lot more.