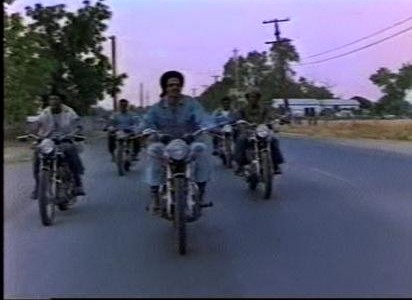 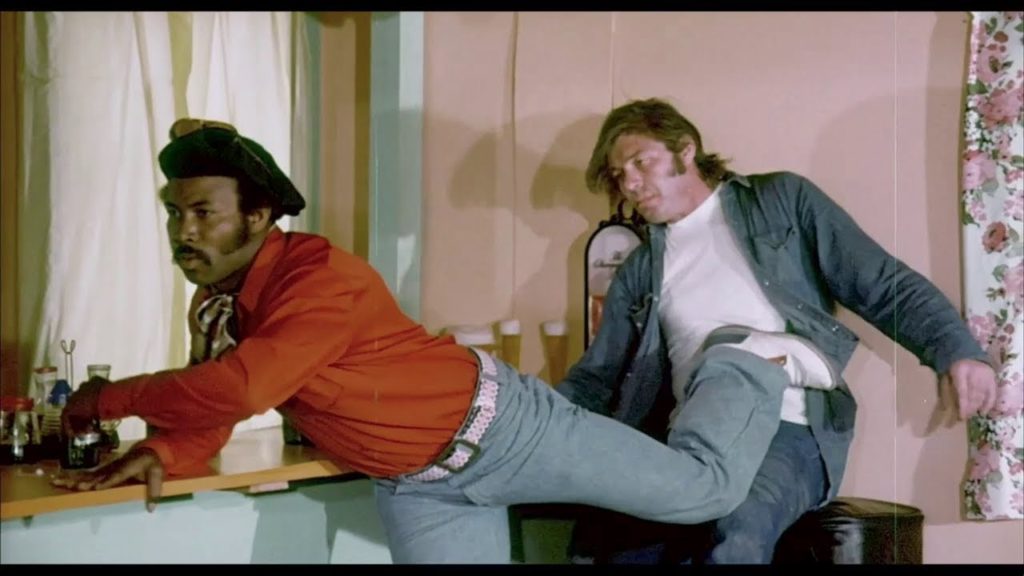 THE BLACK 6 (or THE BLACK SIX, depending on which marketing materials you find) is both the most pleasant surprise and biggest frustration of any of the films I’ve encountered in my short time writing this column. A combination of blaxploitation, bikersploitation, and NFL-sploitation (Did I just make up a “sploitation?”) that is surprisingly thoughtful at times and still relevant, it also leads to a climax that is clumsily handled, undercutting many of the relatively strong moments that came before it.

A prologue introduces us to Eddie (Robert Howard) and Jenny (Cynthia Daly), an interracial couple making their plans for the future that involve getting out of their small town with his football scholarship to a state university. But as with most innocent dreamers in ’70s exploitation films, things go wrong very quickly. Jenny’s brother Moose (John Isenbarger), the leader of a white supremacist biker gang, arrives on the scene. Moose sends Jenny off with a member of his gang and then orders the murder of Eddie in a grisly sequence where the gang whips him to death with chains.

After that harsh opening scene, the film shifts tones with an unintentionally hilarious title sequence that introduces the titular bikers. In an unexpected turn, they are all played by NFL stars who are credited with both their names and the teams they play for. Forget how unfathomable it would be in this day and age for a NFL team to allow any of their players to take part in a film where they ride motorcycles and do their own stunts in brawls—the image of seeing Gene Washington, Mercury Morris, Carl Eller, Lem Barney, Willie Lanier, and Joe Greene doing their best to look natural while obviously having trouble keeping upright on their bikes is an image that is unforgettable. 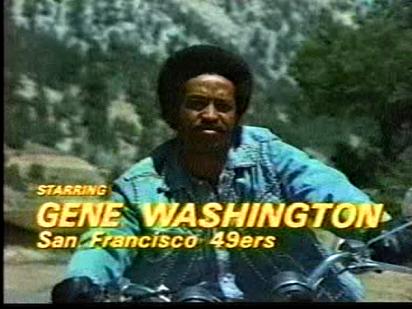 A series of scenes designed to introduce the “6”and explain their philosophy continue that goofy tone. Veterans of the Vietnam War, they have rejected putting themselves into situations where they might be forced to resort to violence. But as six black men riding around the country on motorcycles—not surprisingly—they find themselves in tense situations quite a bit more than most other people. After a skirmish at a roadside bar run by racist owners results in Joe Greene literally knocking the building down, Bubba (Washington) receives word that Eddie has been murdered. It turns out that Eddie was Bubba’s brother and Bubba has not been to his hometown since before the war. Bubba reluctantly returns home for the funeral with the rest of the guys along for support.

Once home, Bubba discovers a town full of people who all know who killed Eddie, but who are afraid to talk to the ineffectual police force about it. In the first of a few unexpected tonal and plot shifts, THE BLACK 6 reveals itself to be more of a thoughtful drama about Bubba confronting regrets of his past and philosophical discussions about the merits of avoiding confrontation versus standing up to racism/aggression as “the 6” realize they will have to make a stand.

This turn could have led to a ponderous mess, but director Matt Cimber (working from a screenplay by veteran genre writer/character actor Mike Angel) has the good sense to quickly abandon the idea of giving all the football players equal time. Instead, he focuses in on Washington’s performance as Bubba. Washington has actual gravitas and is a natural in front of the camera. He carries the film through the dramatic beats with ease and gives it an emotional center that allows Cimber to explore the unofficially sanctioned racism and segregation of the small town ruled by the biker gang. 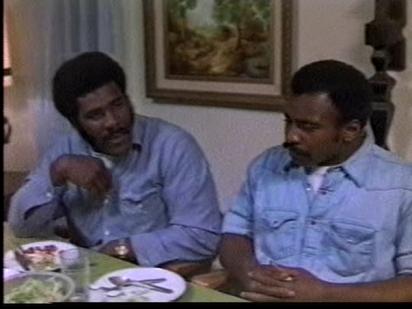 The other strong component that THE BLACK 6 has going for it is a good script by Angel that is—sadly—still very timely with its use of easily offended white supremacists as villains. While Isenbarger is hardly the strongest of actors, his dialogue and “holier-than-thou” demeanor is worthy of booing and hissing at the screen. The big speech Moose gives to his gang to hype them up for a rumble with our heroes sounds like a screed that could still be found on any white supremacist message board:

“I want the word to get out. I’m tired of spooks with white chicks strollin’ up and down the avenue and flaunting their black asses, challenging you to do something about it! It’s time something was done and I want it to come down so heavy that they’ll talk about it forever. No more runnin’! The white man is tired of runnin’. They’ve got to learn that they’ve pushed too far. And when you push a man too far, one day he’s gonna turn around and beat your brains out!”

Cimber successfully ratchets up the tension in the build to the final brawl between the heroes and the villainous white supremacists. But that final brawl reveals just how low-budget a production THE BLACK 6 actually is. The posters claim you’ll see the titular badasses “waste 150 motorcycle dudes!” when in reality, it looks to be about forty extras taking awkward falls off bikes in a chaotic sequence that is hard to follow due to lack of coverage and choppy editing. As an action sequence, it’s a mess, but as a wrap up to the fairly engrossing story that came before it, it’s a massive letdown.

Still, given that THE BLACK 6 is an exploitation film starring half a dozen NFL stars (and former MLB star Maury Wills in an oddly performed cameo) from 1973, it’s practically a miracle that it turned out as well as it did. The film ends with a promise that “The Black Six would return,” but it never happened. For once, I’m disappointed that a film didn’t spawn a franchise. 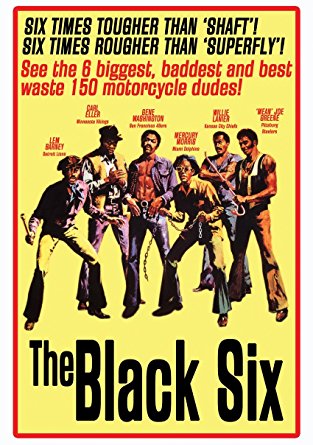