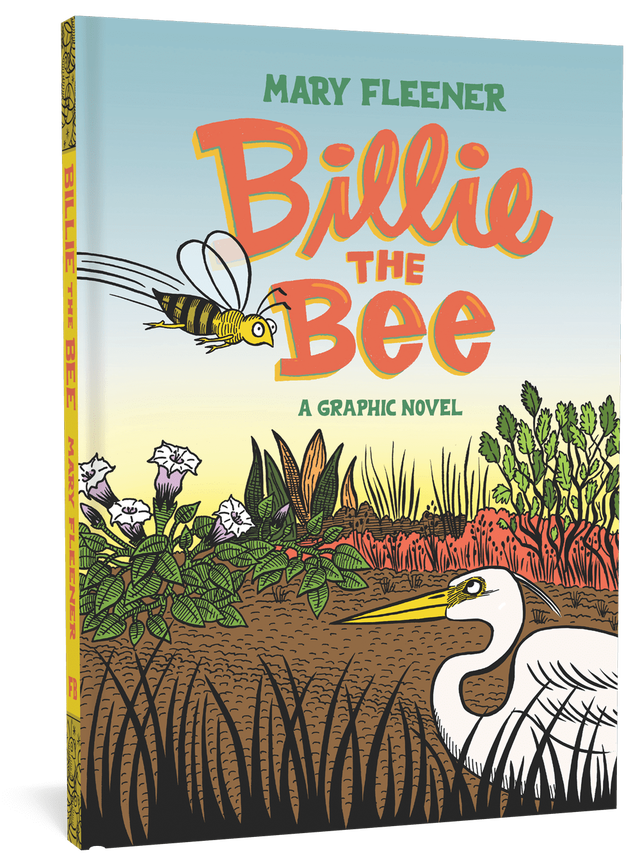 Can it be? Or should that read “can it bee”?

It seems impossible that Mary Fleener’s new Fantagraphics-published hardcover book, Billie The Bee, could be her first proper “graphic novel,” and yet — that’s precisely the case. It took me a minute to wrap my head around that fact, as I’ve been reading Fleener’s stuff literally since I was a kid (I know, I know — I had no business owning copies of Wimmen’s Comics and Slutburger Stories when I was 13 or 14 years old, but I could say the same for any number of “underground” comics I was able to get my hands on at that age) and her singularly earnest, no-holds-barred work has been a constant in my reading life. I guess if you’d pressed me prior to this as to whether or not she’d done an “OGN,” my answer would have started with “Now that you mention it,” and ended with “surely she must have,” with some variation on “I don’t recall reading one, but” smack-dab in the middle.

It’s time to cast mistaken assumptions aside, though, and enjoy this long-time-coming moment for what it is. 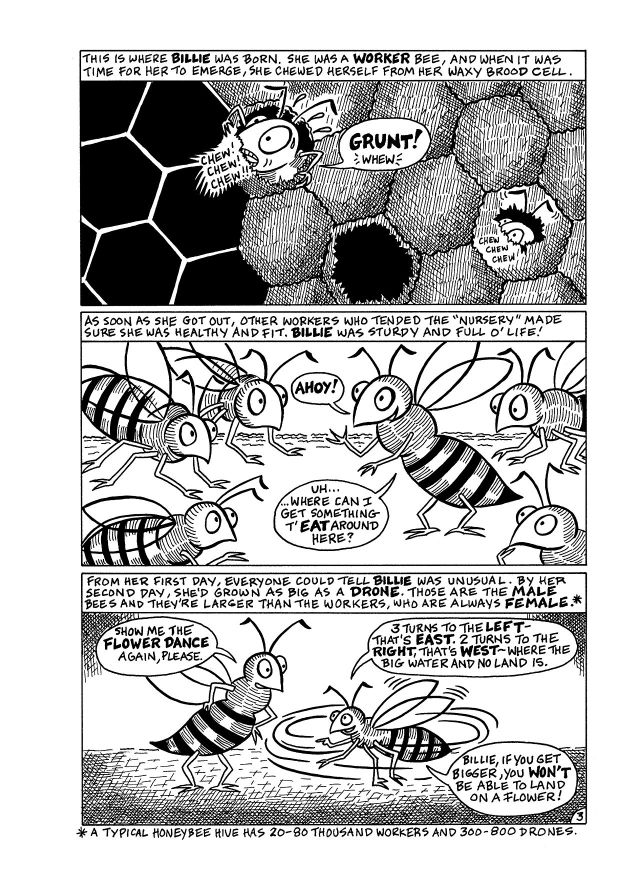 By turns humorous, educational, and melodramatic, Billie The Bee is a perfect vehicle for Fleener to address ecological concerns near and dear to her heart, position herself within a historical continuum  starting with Walt Kelly’s Pogo and continuing on through Jeff Smith’s Bone and Jon Lewis’ True Swamp (in point of fact, she wrote the introduction to the second Uncivilized Books collection of Lewis’ seminal 1990s series), and maybe even to introduce herself to a new generation of readers that will be no-doubt enriched by familiarizing themselves with the work of a justly-legendary talent. And if it meets with the critical and commercial success it deserves, who knows? Maybe we’ll all be treated to a latter-day creative resurgence from a pioneering talent.

That’s my hope, at any rate, and while this book is certainly a stylistic and thematic departure for a cartoonist best known for her autobiographical stories, she’s nevertheless immediately and obviously comfortable operating within the confines of the “funny animal” genre. Protagonist Billie — a musically-inclined honeybee with an outgoing personality and a genuine love for her free-wheeling life — is affable, smart, quick-witted, and just plain fun, while supporting characters such as dirty-minded turtle sisters Flo and Mo, Kay the gentle fox, and Rayleen the surprisingly-amiable rattlesnake are all unique and relatable “person”alities that each bring charm to the page and a smile to readers’ faces, their San Diego marshland home a thoroughly engaging updating of Okefenokee Swamp. 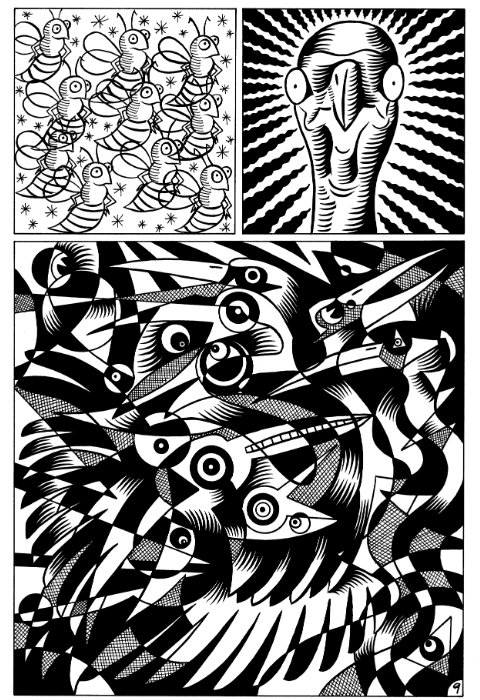 It’s also a perilous environment, though, or should I say it becomes one thanks to some careless humans introducing into its delicately-balanced ecosystem a pack of — nah, that would be telling. And when Mother Nature tries to “course-correct” the situation on her own by means of natural disaster, it’s up to Billie to assume a leadership role if she, the rest of her hive, and her extended, multi-species “family” hope to survive and adapt. Is she up to the task?

Fleener’s cartooning is as solid as ever here, with distinctive linework, precise cross-hatching, expressive faces, and well-timed phantasmagorical explosions of her trademark cubism combining to create a visual storytelling experience that is by turns familiar and surprising, comfortable and joyously confounding. It’s a compelling and delightful book to read, no question, but perhaps an even more compelling and delightful one to look at. 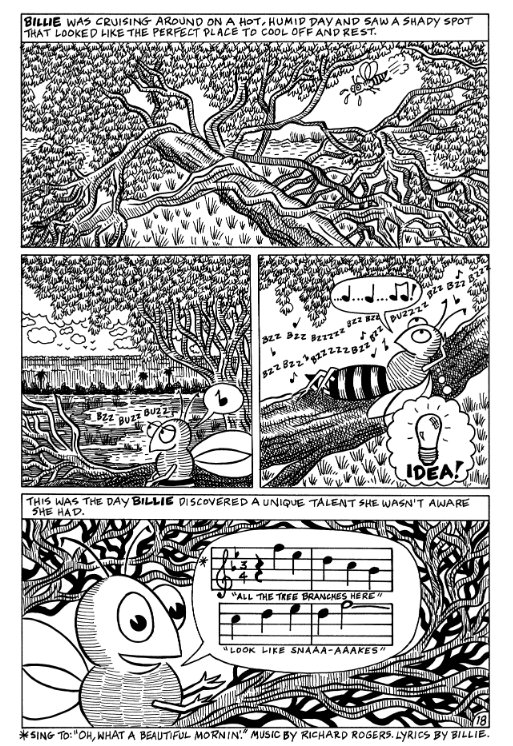 Fleener’s firing on all cylinders here, telling a story she’s clearly been putting a great deal of thought and preparation into for who knows how long. There’s an awful lot of heart on clear display in Billie The Bee, and it’s this critic’s honest belief that even the most jaded and cynical readers will likely find themselves utterly delighted by it.