Home  ⁄  The Wire  ⁄  [WHAT THE FEST!? REVIEW] ‘DEPRAVED’ OFFERS AN EMPATHETIC TAKE ON THE FRANKENSTEIN MYTH

The modern indie horror scene would be nowhere without Larry Fessenden. The actor and filmmaker has become something of a mascot and godfather of the scene, whether through his innumerable cameos and supporting turns, or through his production efforts with his company Glass Eye Pix. He’s seemingly everywhere, to the point that it’s sometimes easy to forget that Fessenden is a director himself, and a heavily influential one at that, exploring the grittier, more humane side of horror since his 1991 debut NO TELLING.

DEPRAVED marks Fessenden’s first feature length film in six years, following his 2013 made-for-Chiller-TV killer fish flick BENEATH. Like many independent filmmakers with a notable following, his projects began to trend slicker and more mainstream, with Fessenden working with big(-ish) stars like Ron Perlman, Connie Britton, and James Le Gros on THE LAST WINTER before graduating to making an episode of Fear Itself the short-lived NBC sort of-spinoff of Masters of Horror. With DEPRAVED, Fessenden has returned to his more indie roots, with an empathetic, personal, and emotionally devastating modern take on the Frankenstein mythos.

Fessenden’s breakout came with his second feature, HABIT, which found his alcoholic lead seduced by a big city vampiress. Much as he refracted Dracula myths through a grimy, downtown New York vibe, finding a grungy humanity in the lives of these aimless miscreants, he does so again with his loose riff on Mary Shelley’s tale. Here, the monster is now Adam (Alex Breaux), tall, lanky and handsome despite the patchwork of scars crisscrossing his body. When Adam awakens, in a grubby loft somewhere in Soho, surrounded by make-do lab equipment, he’s a blank slate: wide-eyed, silent, staring at the world with uncomprehending eyes. He is, in other words, a baby. His “father” is Henry (David Call) a brilliant former Iraq War medic who invented a pill that can reanimate dead tissue. He wants to perfect it for use in saving lives.

Initially, it was only able to bring back to life dead, severed limbs, arms reattached as if nothing ever happened. But Henry wanted to move onto bringing whole humans back wholesale. With the help of doctor buddy turned wealthy investor Polidori (Joshua Leonard) setting him up in his white-tarped secret lair, supplying him with body parts from fresh cadavers, Henry has stitched together his own undead prodigal son. But the cruelties of life are unable to be escaped–or to be prevented from sneaking their way into an innocent’s burgeoning mind, no matter how hard Henry tries.

Fessenden never treats Adam as a monster in DEPRAVED. If anything, he’s the film’s hero–a stumbling, ostensibly sweet, confused, and shambling shell of a human, reacting to what’s around him, at first, with a doe-eyed credulousness before the haunting, despairing truths of what it means to be human encroaches on his rapidly healing (re:developing) brain. Nor is Henry a villain; he’s a concerned father, trying to guide his “son” through life in the best way he knows how, even if it isn’t always necessarily the best way in general. 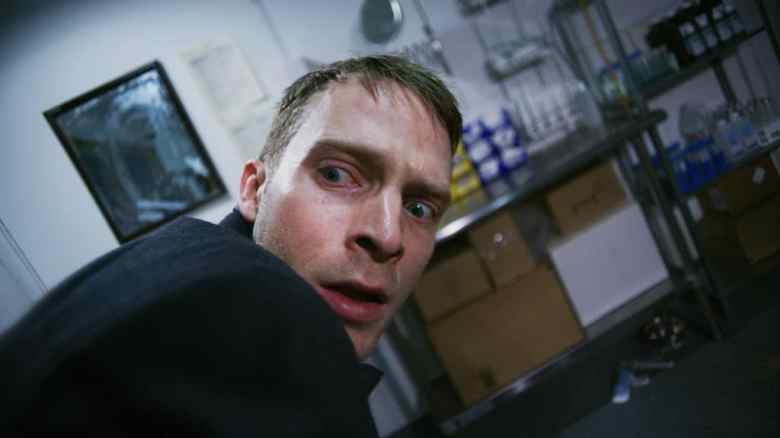 DEPRAVED works best when it’s focused on Adam and Henry, and, to a lesser degree, the hedonistic, cynical, and vaguely amoral rich kid Polidori, who acts as a kind of ne’er-do-well, bad influence uncle in this vague family unit. For most of the movie, Fessenden doesn’t even treat his material as a horror film, using the framework of Shelley’s story to get us to see through Adam’s eyes. Fessenden even  approximates a sense of wonder at times, as Adam’s rapidly escalating mental prowess begins to expand and take in the world around him. One of the film’s best sequences has Polidori bringing Adam out for a night on the town, visiting a strip club and museum; as Polidori expounds on his cynical philosophies, Fessenden shows Adam taking it all in a flurry of bright color and emotion.

Fessenden, in fact, carries that experimental streak throughout the film. The director shows Adam’s progress, the way that his synapses are firing and building, via a simple visual overlay of brightly flashing, amoeba-like swirls designed to represent the electricity of the cells. Fessenden does this trick in a very low budget way, which causes a sort of disorientingly cheap effect at first, but one that comes to eloquently and visually convey Adam’s arc.

Fessenden is smart enough to know that there are no villains or heroes in this story; Adam is the closest thing to a hero here, but even he is capable of horrific violence, and Polidori is the closest thing to a villain, but he is also more of a craven coward desperate to keep his science project alive–a  project with the intent of saving lives. Fessenden loosely keeps the structures of Shelley’s novel and, to a degree, the James Whale-directed version of FRANKENSTEIN as he charts Adam’s journey from naif to “monster.” That said, at two hours Fessenden dawdles too much; scenes of Henry bonding with Adam get repetitive and there’s a wealth of extraneous characters, including Addison Timlin in a contrived extended cameo role designed to replicate a key scene from Whale’s original (in addition to some narrative beats from BRIDE OF FRANKENSTEIN) and a subplot involving Chloe Levine that does not tie into the film well, nor has the emotional impact that Fessenden clearly thinks it has. Scenes like these could have been trimmed, with the focus clearly placed on Adam and his journey. But these are minor quibbles. Because Fessenden has returned to the screen, and returned to his roots,  with an empathetic portrait of a monster. Welcome back, Larry.