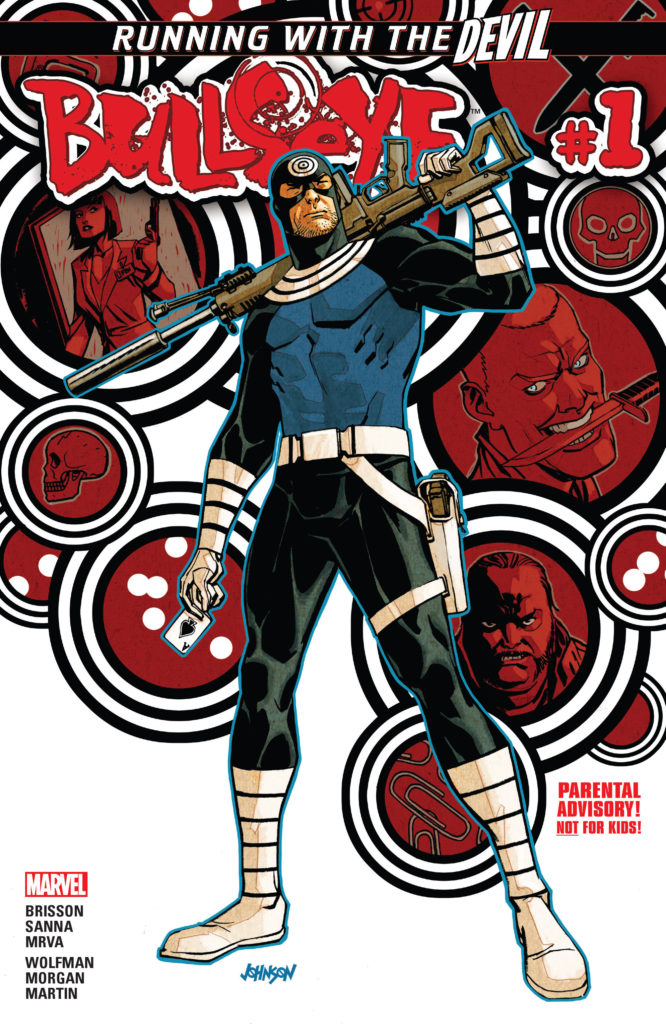 I really don’t know how well Daredevil is selling these days, but it must be doing alright since Marvel is launching no fewer than three spin-off titles under their new “Running With The Devil” umbrella label this month. Kingpin hits next week with Elektra following the week after, but first out of the gate is Bullseye #1, the opening salvo of a five-part miniseries from writer Ed Brisson, artist Guillermo Sanna, and colorist Miroslav Mrva. The premise of sending the world’s deadliest assassin into the middle of the Colombian drug war in order to rescue a dying mob boss’s kid sounded reasonably interesting, and Brisson impressed the heck out of me with his gritty, “street-level” Image series The Violent, so I figured what the heck? Nothing to lose — except five bucks, I suppose — in giving this debut installment a go.

Allow me to bitch for just a second about that five dollar thing for a minute before we go any further, though. Marvel’s been pulling this hustle for the last couple of years, and frankly it’s getting pretty old — they’ll take a standard-length comic, tack on a generally-useless eight-page back-up feature (this one by Marv Wolfman, Alec Morgan, and Frank Martin), and add a buck to the cover price, claiming they’re giving you a “extra-sized first issue.” So I sure hope you like that back-up strip (this one wasn’t bad, but it was hardly anything special), because it’s literally costing you a dollar. Okay, rant over, let’s talk about the main feature. 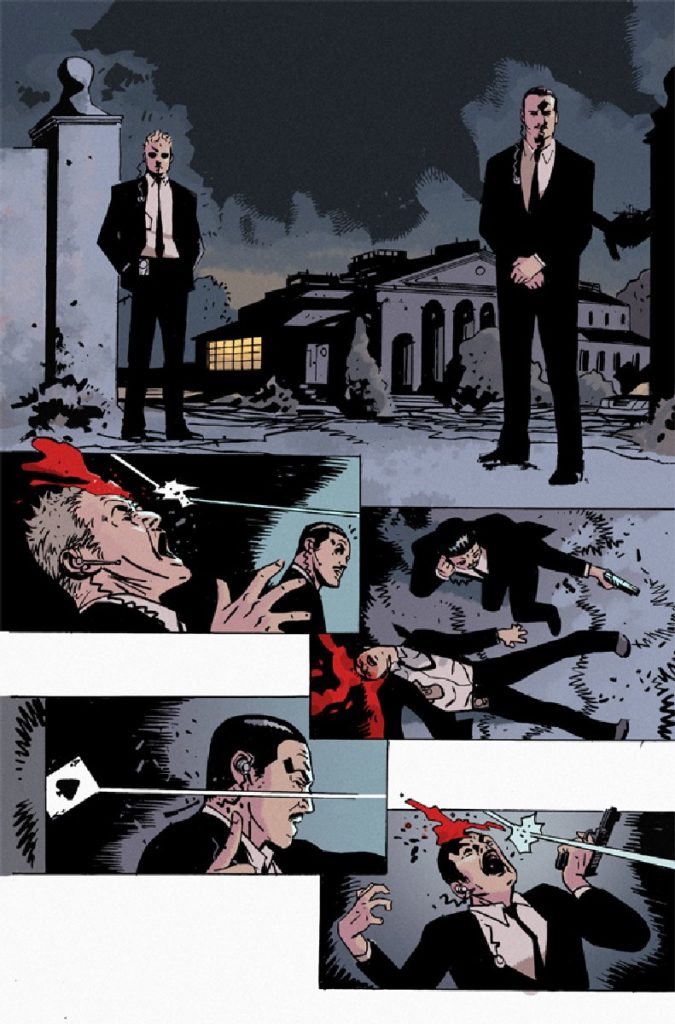 I’ll get right to it and say this book has no consistent visual style whatsoever — Sanna seems like a decent enough artist for this sort of crime comic, but he bobs and weaves between drawing in a style that’s mostly his own on some pages and doing a kind of poor man’s approximation of Eduardo Risso on others. Mrva’s colors give things a little bit more of an air of consistency than they might otherwise have, but the actual line art? Man, it can’t decide what it even wants to be, let alone do. Hopefully subsequent issues will give us a more confident and less derivative Sanna unafraid to show us what he’s got, but this debut installment looks more than a bit — I dunno, schizophrenic, I guess. 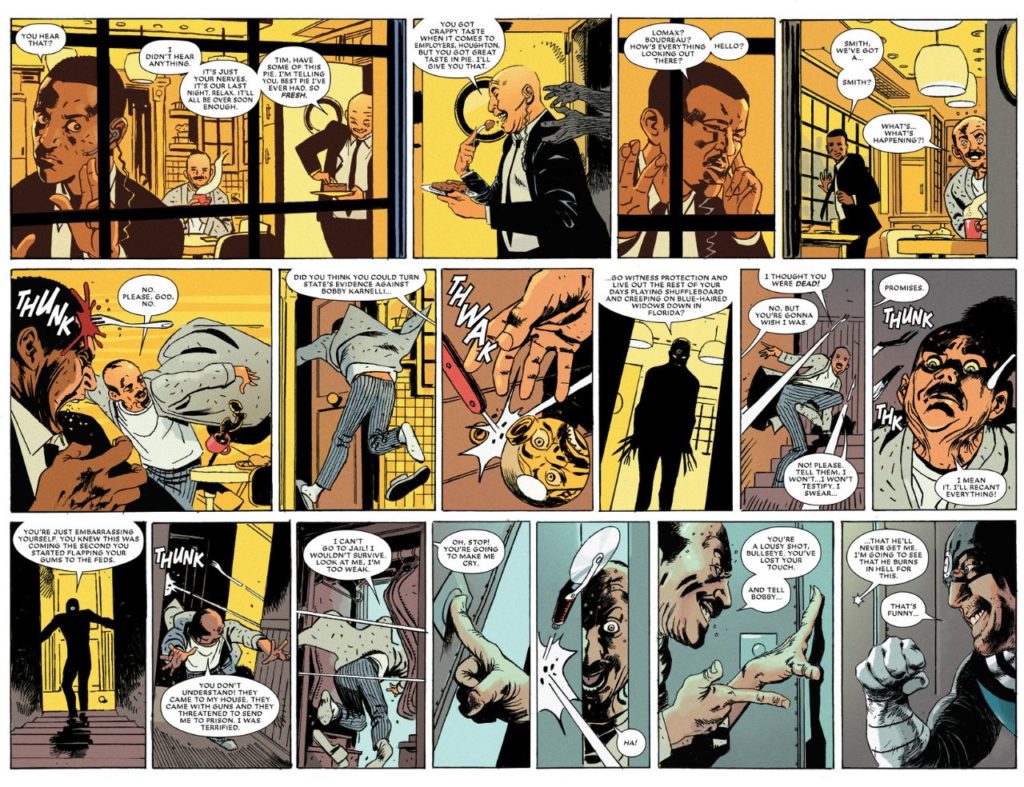 Unfortunately, Brisson’s script isn’t a whole hell of a lot better. Inconsistency is again at the forefront of the problems here, with Bullseye showing a distinct and, to be honest, highly unprofessional flair for the dramatic that isn’t gonna get you too far in the assassin-for-hire racket, where you’d assume that keeping a low profile would be of paramount importance. Bullseye’s showmanship gives rise to a pretty damn cool sequence where he creates absolute havoc on the streets with nothing more than a couple of well-aimed paperclips while he’s meeting with his agent in an office upstairs and well away from the mayhem, but between nearly fucking up the assignment he’s on at the start of the comic by being more than a bit too enthusiastic and announcing his arrival in Colombia in a manner that’s the absolute opposite of the old adage “you won’t see that coming” at the end, this iteration of Bullseye seems uncharacteristically flashy and, well, sloppy. The end result? A character that’s both decidedly less dangerous and, crucially, less interesting. 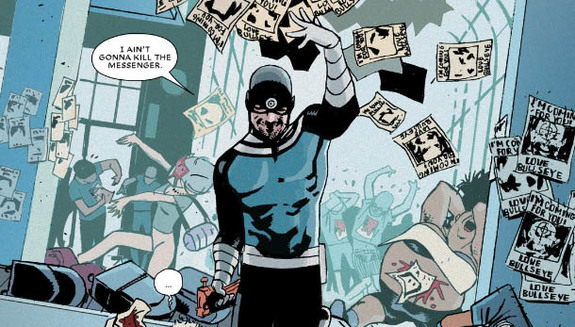 So, yeah, I’m really not sure where things are headed over the next four issues, but this much I can say with absolute certainty — I won’t be hanging around to find out. If I hear that Brisson, Sanna, and company have turned things around, I suppose that I could be tempted to probably give the trade collection ago once it’s all over, but there’s no reason offered here to keep plunking down $3.99 a month for single issues of this series. Bullseye’s calm, cool, sociopathic sense of confidence and control has always been his defining trait, and to see that tossed out the window right off the bat is a risky gamble to take with the character, and one that just doesn’t pay off. I had reasonably high hopes for this comic based on Brisson’s pedigree alone, but I’m sorry to report this was just a lousy comic.

At the risk of sounding hopelessly cliched, Bullseye #1 misses the mark by a country mile.