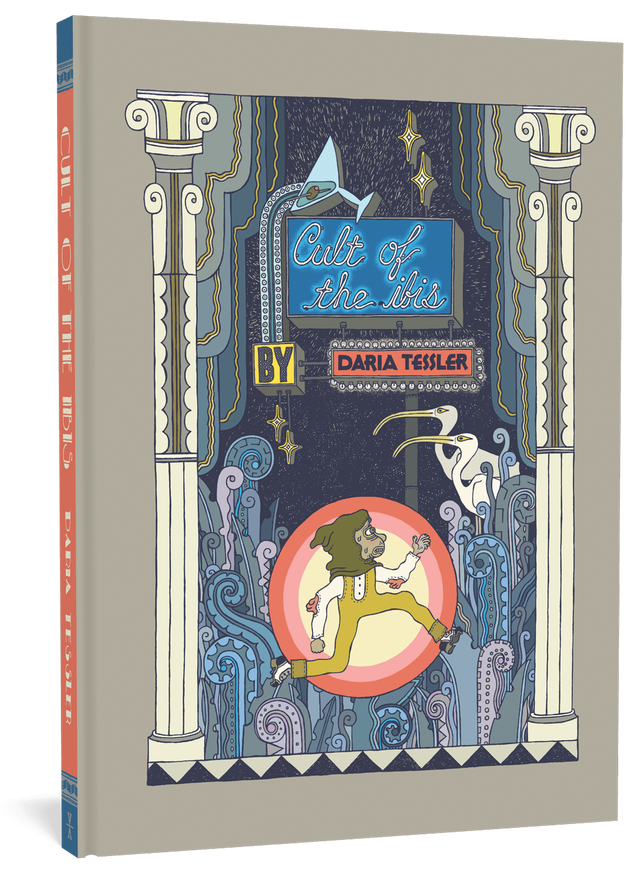 The generally-held view of the ancient mystical pseudo-scientific practice of alchemy is that it was all about turning lead into gold, but my understanding is that this is a rather limited “piece” of the overall alchemical project, which was largely concerned with creating that which didn’t exist before through the union of opposite polarities: male/female, animate/inanimate, precious metal/base metal, etc. Even that’s probably selling the whole “art” short, mind you, but for purposes of this review and its subject — ‘s newly-released Fantagraphics Underground fancy hardcover graphic novel Cult Of The Ibis — it’ll do in a pinch.

We’ve lavished praise upon Tessler’s gorgeous riso-printed publications from Perfectly Acceptable Press on this site previously, but how well her rich, intricate style would translate both into the confines of more traditional “comic book” storytelling and, crucially, into black and white was an intriguing question for this critic as I went into this one, especially given that I didn’t read the two (I believe, at any rate) self-published single issues that constitute the first good chunk of it — but any concerns I may have momentarily entertained were dispelled with one look at her detailed, richly-textured pages that delineate a world right out of a Fritz Lang film, all mystical proto-“steampunk” cityscapes and biological curiosities oozing with the allure of the genuinely, even the conceptually, forbidden.

Hell, her nameless protagonist even reminded me of Peter Lorre, despite looking nothing like him. 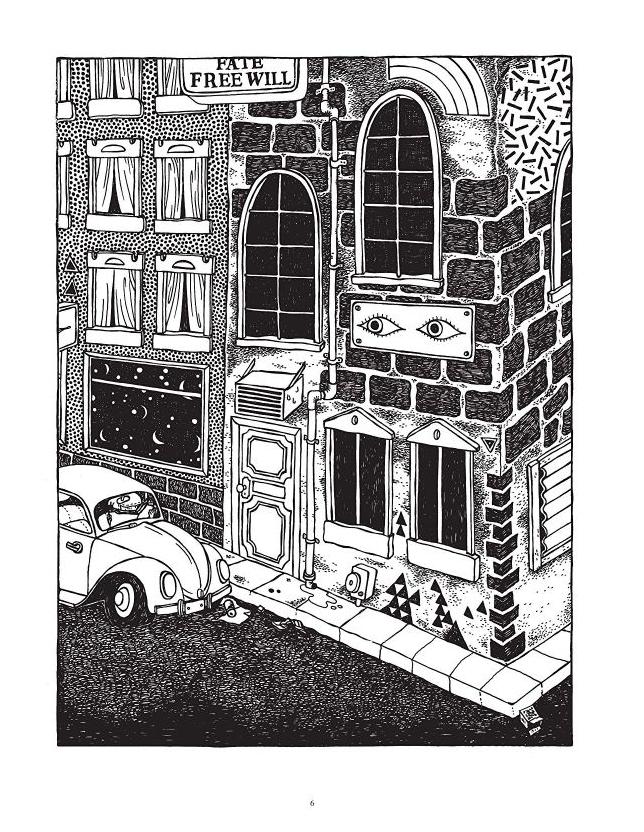 The general character of the book itself can be summed up as an “alchemical caper,” as our amateur practitioner of the so-called “Great Work” pulls off a bank heist and then burns his debtors/crime partners by blowing the loot on a homemade, do-it-yourself homunculus kit, the pursuit — and eventual ascertainment — of which sends him spiraling into a hitherto-unseen mental and physical netherworld where what’s “real” or not is not only entirely subjective, but probably of little consequence in the scheme of things: It’s happening, and at some point whether the “playing field” of events is entirely within the hapless schlub’s mind or in the already-fantastical world he inhabits really stops being a point of concern.

Which is probably a roundabout way of giving Tessler a pretty damn grandiose, and entirely well-deserved, compliment: Her visual storytelling sucks you in and doesn’t let you go, offering no option but for you to meet it on its own terms, but navigate your way through according to your perceptions and/or interpretations. That’s the kind of thing I’m always going to dig, of course, but like any alchemist, it is Tessler’s method that is fascinating as her finished work. 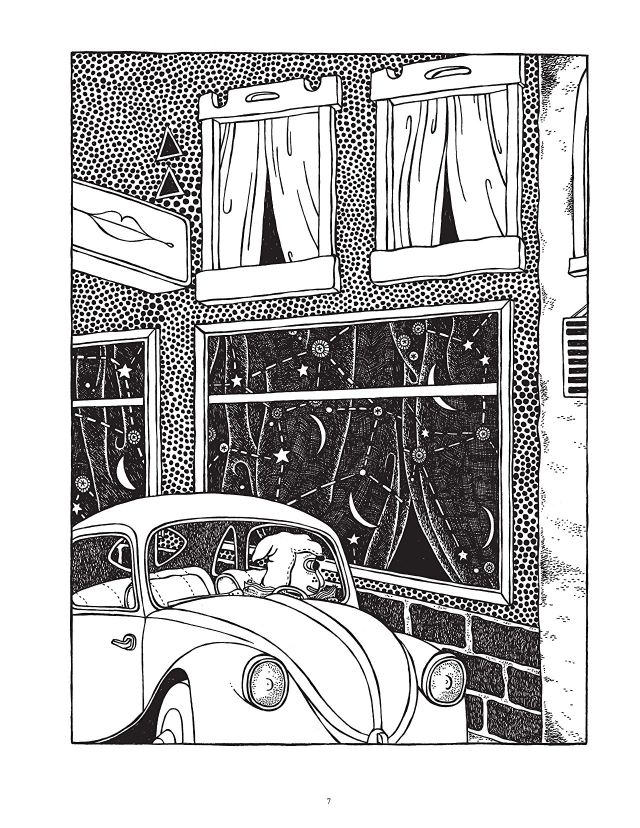 Which brings us back to that whole concept of the union of opposites: Tessler’s narrative is a study in contrasts, chief among them being single-panel “splash” pages vs. densely-packed (yet quite visually fluid) grids; extended wordless sequences vs. text-heavy (and archaically-scripted) mock “articles” from a bargain-basement “alchemy for beginners” magazine; solid buildings and streets vs. amorphous, transitory physical beings; easily-identifiable establishments such as bars and shops vs. the entirely indescribable patrons and goods within them. It’s a gutsy move, one that inherently reflects her book’s subject matter, and Tessler stakes the entire project on her ability to transmute these disparate elements into something greater, even altogether other, than the sum of its parts. 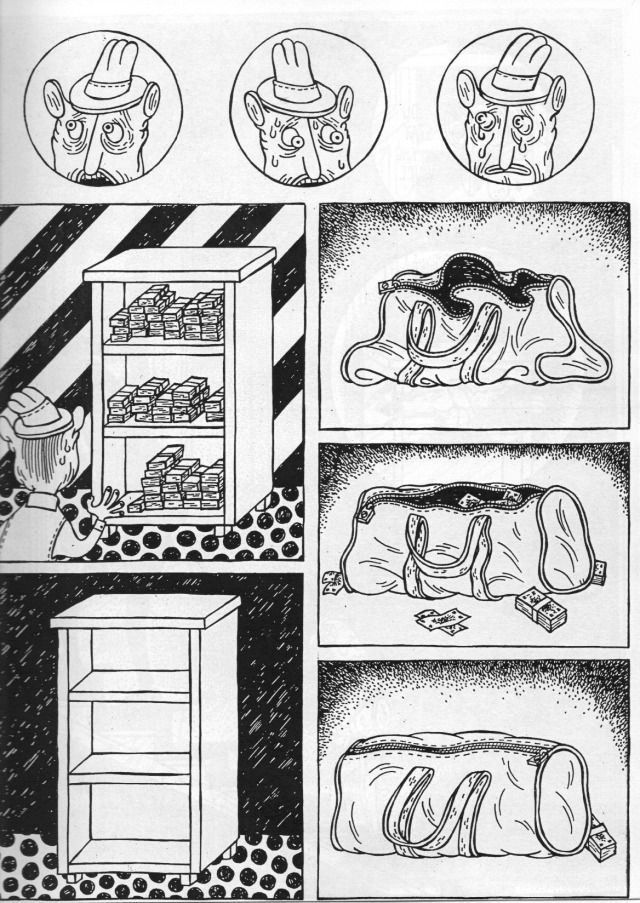 As to whether or not she pulls it off — that’s going to depend largely on any given reader’s own sensibilities, but for my money (or maybe that should be gold), she not only does so, but frankly manages to create something borderline-magnificent and utterly unique unto itself. I can see where a certain amount of frustration, even of disappointment, might enter into the equation for many a thoughtful and attentive adept seeking to crack the visual codes and mysteries on offer here, so oblique and left open to pure possibility are many of story’s key events, but if you’re ready to continue engaging with the book even after you’ve closed its covers — to let it wash over you and sink in before cracking it open and having another go — I think you’ll find that its after-effects are, if anything, just as mystical, perplexing, and wondrously confounding as its contents.

There are probably many good words one could use to describe a work of art that engenders this sort of careful consideration on both an intellectual and emotional level, but the one that seems most appropriate for this occasion, at least to my mind, is magical.