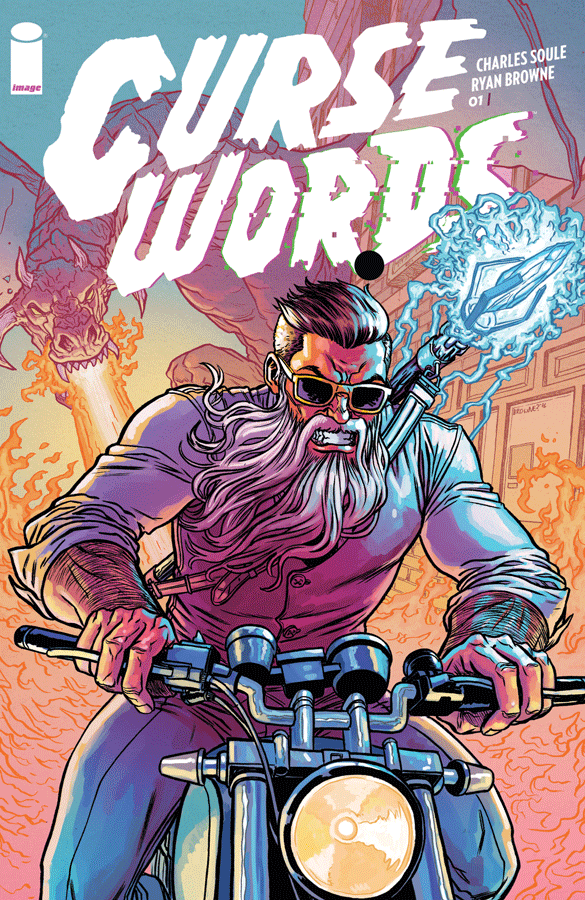 Charles Soule and Ryan Browne’s new Image Comics (ongoing, I presume) series Curse Words has looked like all kinds of batshit-crazy fun since it was first solicited some months ago, and now that the extra-sized first issue is here, I’m pleased to say the preview pages that have been non-Wiki leaking out didn’t lie: This is a high-energy, full-throttle, goofy-ass, balls-out book that doesn’t care half as much about making sense as it does about just giving its readers a good, old-fashioned good time. 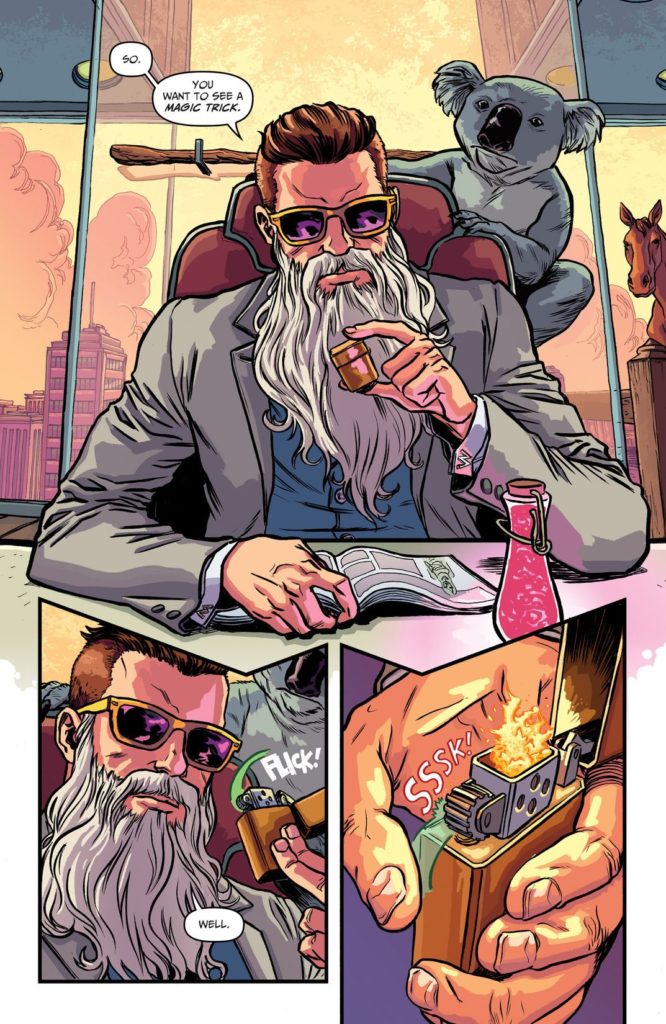 Not that Soule’s script doesn’t make sense, mind you — in fact, it’re pretty simple, straightforward stuff :an other-dimensional evil wizard named, get this, Wizord finds himself thrust into our world (New York, to be specific), and rather than destroy the place as was his original intent, he decides to hang around, make some money, and live the good life first. But in order to do that, he’s gotta establish himself as a “good guy” before he can pimp out his services as a magician-for-hire. And so, with “funny Koala” sidekick Margaret in tow, it’s time to become the first genuine wizard of the celebrity age.

It all works like a charm until it doesn’t, and if the premise here sounds more than a bit similar to that of Image stablemate Birthright, rest assured that those “happy coincidences” continue right through to the cliffhanger, which sees another practitioner of the so-called “dark arts” rip the sky open and come after Wizord in order to force him to stick to the plan for global destruction — or die. Whichever comes first. But whereas Birthright adds family drama and personal redemption into the sword-n’-sorcery mix, Curse Words spices things up with with subtexts perhaps more appropriate to the Trump age, chiefly: personal greed, lust for power, and moral and ethical decadence. All delivered with the most knowing wink and nod you can possibly imagine, naturally.

Browne, fresh off blowing minds with God Hates Astronauts, is all about the dynamism with his visuals here, as well, and if there’s an artist better-suited to the sort of “leave it all on the page” craziness the subject matter here lends itself (with considerable interest) to, I’d be hard-pressed to name them. Inventive panel layouts add a further eye-glueing aspect to the proceedings, as do the vibrant, explosive colors supplied by Browne, Jordan Boyd, and Michael Parkinson (don’t feel too bad — this book has three letterers, as well, Browne himself also being one of them), so all in all you’ve gotta say these are pages that almost dare you not to examine them for several minutes at a time. So why not do yourself a favor and do just that? 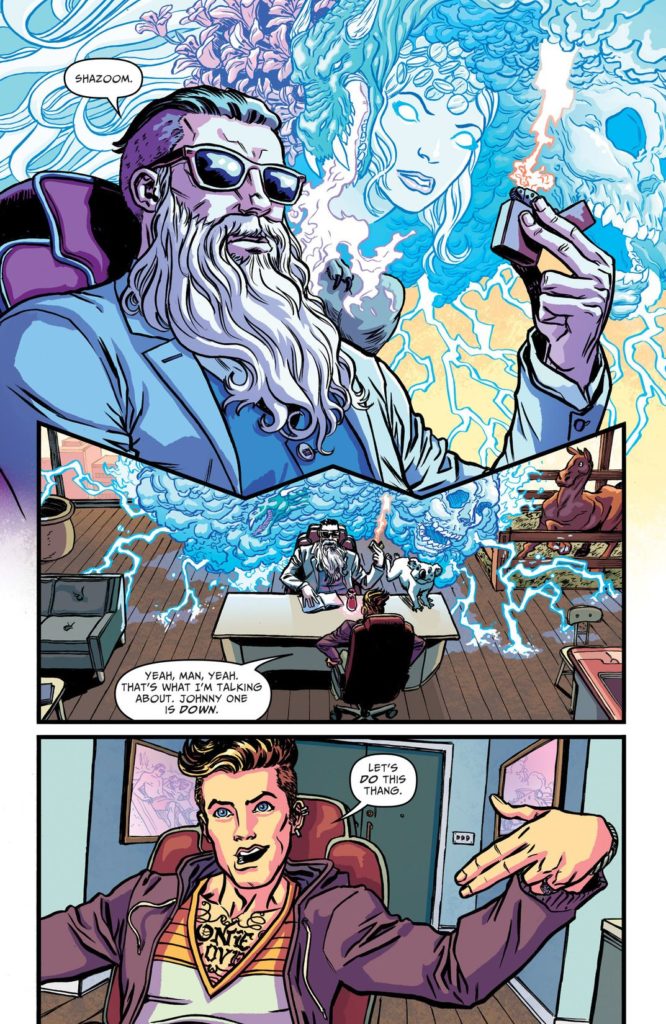 If you need a legit “good guy” to root for in order to enjoy a story, then fair enough — Curse Words doesn’t really have one on offer and you might be better off dropping your $3.99 elsewhere. But if watching reprobate magicians hurling lightning bolts from enchanted spears at each other in the middle of Yankee Stadium sounds like a good time to you — and trust me when I say that it is — then congratulations! You’ve just found the comic you probably didn’t even know that you were waiting for. 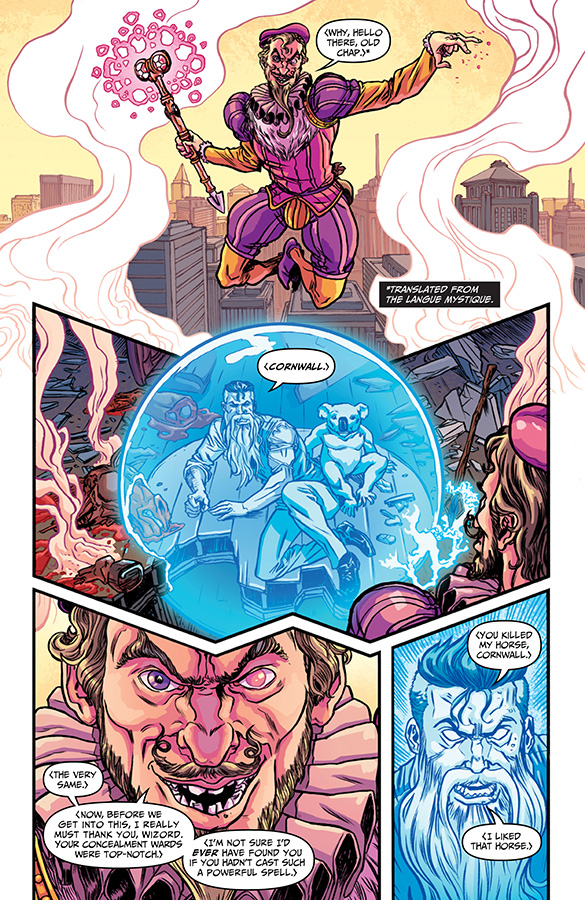