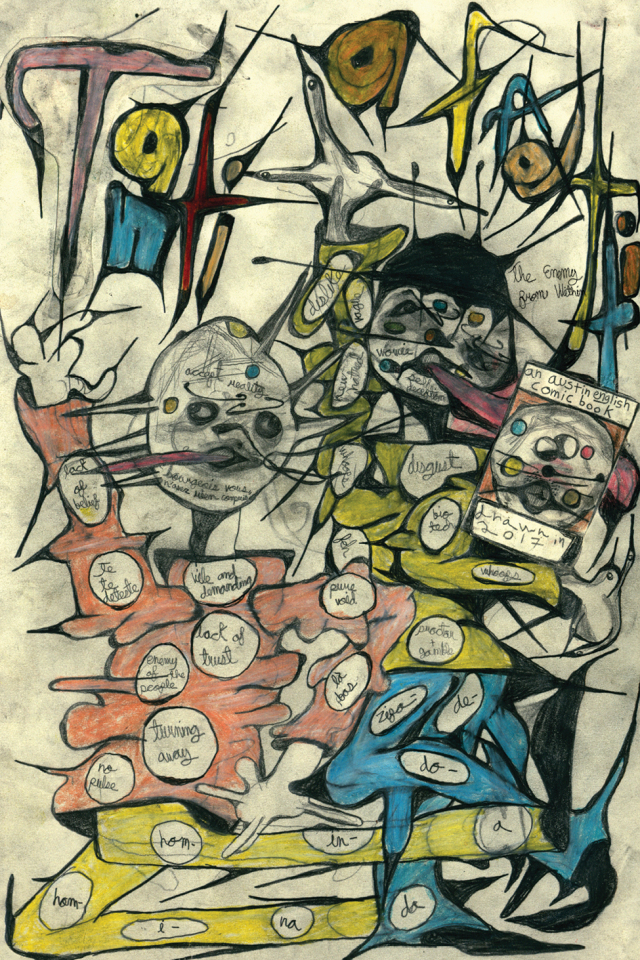 Some comics really make you work.

Not as hard as the cartoonist who made them, of course — and Austin English busted his tail (and his hands, and probably even his brain) on his latest solo book, The Enemy From Within, published in late 2017 by Sonatina Comics. The sheer effort that went into the creation of the thematically-linked triptych of stories (the titular “The Enemy From Within,” “Half-Hearted Slogan Dance,” and “Solo Dance #2”) is apparent on all 22 of these intricately-detailed, insanely imaginative pages. English uses every last millimeter of space available to him, his images densely packed from corner to corner, side to side, negative space a luxury he can seldom afford. He’s clearly got a lot to say — but what is it? 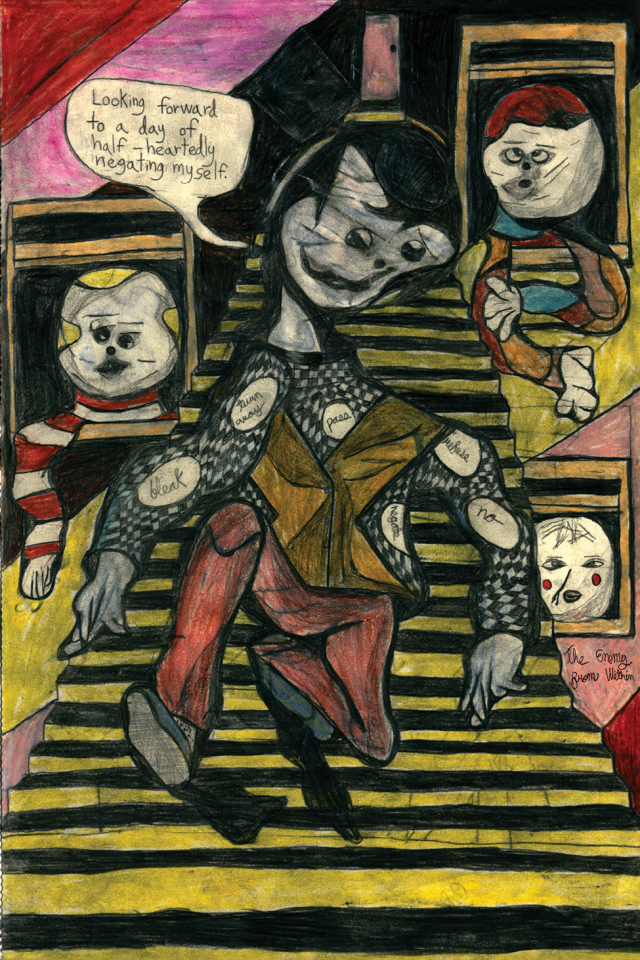 I’ll be honest — four times through this book, I’m still trying to figure that out. But I think that’s the point: English has always been about as visually ambitious as anyone around, his modern art sensibilities on full few (hello Picasso, and all that), but he’s veered completely into dada-ist territory with this one, so it’s a safe bet that the work will have as many different interpretations as it does readers. What it means to me, then, may be something entirely different than what it means to you — and that’s assuming it means anything to you at all, which it very well may not.

And you know what? That’s okay, too — you’ll at least walk away from it with an exhausted mind and even more exhausted eyeballs, since there’s literally no way to casually glance at this. You’ll be drawn in immediately, even if what it is you’re drawn into can’t be fully comprehended, much less described with mere words after you’ve put it down. All of which is my roundabout way of saying “look, folks, I’m doing my best here — and even that may not be enough.” 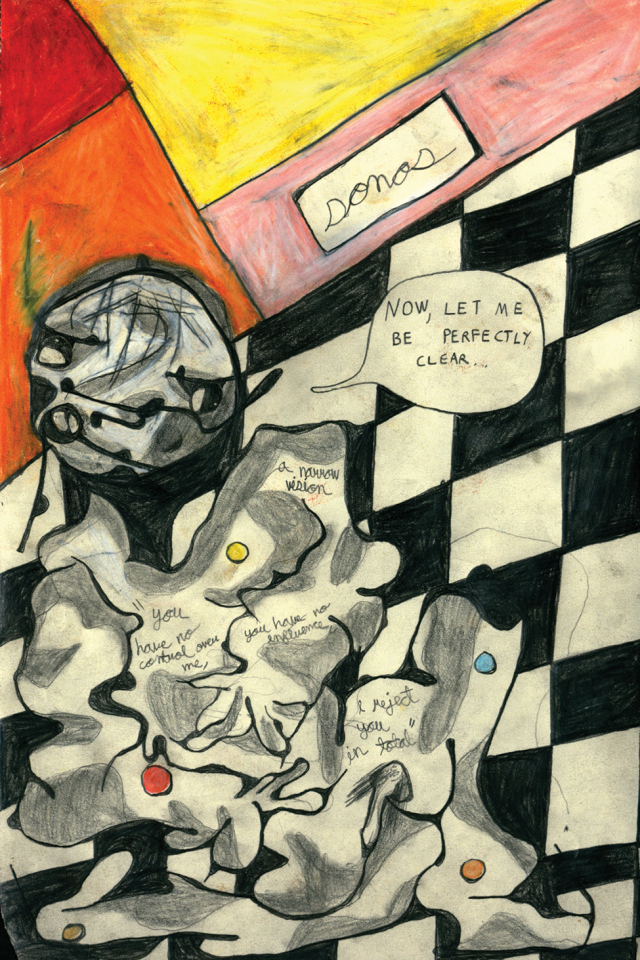 If you’re looking for narrative, forget it — English is expunging the contents of his fevered subconscious out onto the page with too much ferocious precision to slow down for that sort of shit. His characters — I hesitate to use the term “protagonists” — are forever on the brink of a kind of unavoidable oblivion, barely holding it together in the face of a silent-but-immovable edifice of individuality-erasing constructs and/or phenomena such as corporations (and their logos), advertising slogans, cliched catch-phrases (which are scrawled right onto their bodies, as if they have as much physical reality as the “people” themselves), and emotional/psychological needs ultimately dependent on others for their fulfillment (validation, affirmation, love, hate). The question it seems to me he’s getting at is — who are you? Is there an irreducible element of “self” that exists apart from all these influences?

There’s no answer to that, of course –and that’s the scary thing. Coming to terms with the idea that everything and everyone has an effect, even just a passive one, on everything and everyone else means negation is a real possibility at all times, maybe even an ongoing process, whether it comes our way via relationships, consumerism, employment, schooling — no form of interaction is safe. Everything you do means someone or something else “gets in” on some level. And yes, that even includes reading some befuddled (and, no doubt, befuddling) comic book review. 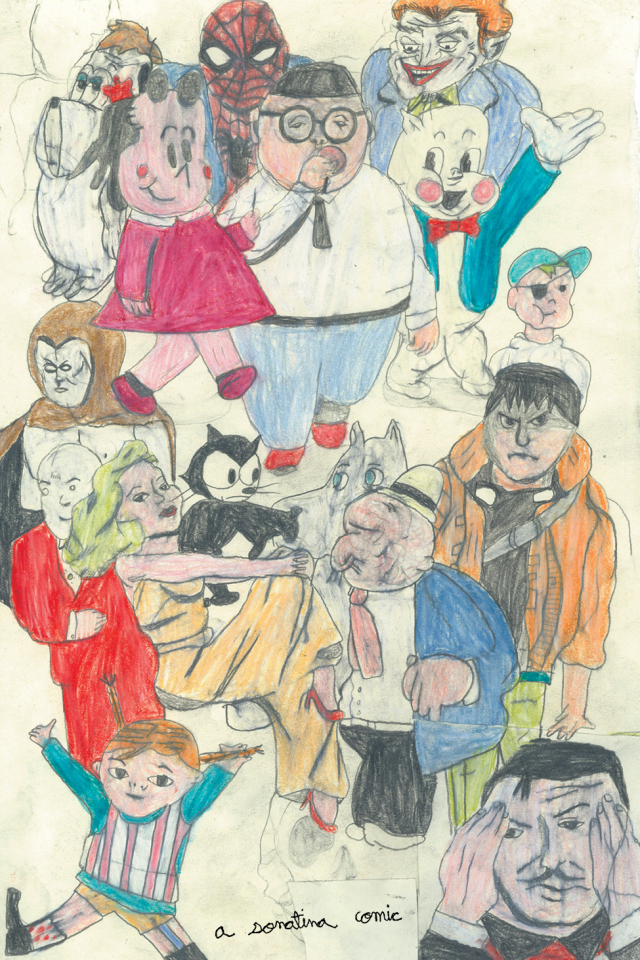 Here’s what I do know for certain: this is a work that challenged me a hell of a lot and will no doubt continue to do so, and the presentation is as gorgeous as material this lushly-rendered and thought-provoking deserves. The covers are thick cardstock; the paper slick, glossy, heavyweight. You’re holding some serious fucking art in your hands here, and Sonatina pulls out all the stops on the production side to ensure you don’t forget it — as if you could. I may not have figured out this comic, or even come close to doing so, but it’s been on my mind constantly, in a way nothing I’ve read so far this year (save, perhaps, for D.R.T.’s Qoberious Vol. 1) has. Austin English has blown open a hole in the universe — and, yeah, in my head, too.

If eight bucks to fundamentally shake up your perceptions of everything about existence itself sounds like a bargain to you — and, trust me, it is — then take the plunge and order The Enemy From Within directly from English via his Domino Books publishing and distro outfit at this link: http://dominobooks.org/enemywithin.html