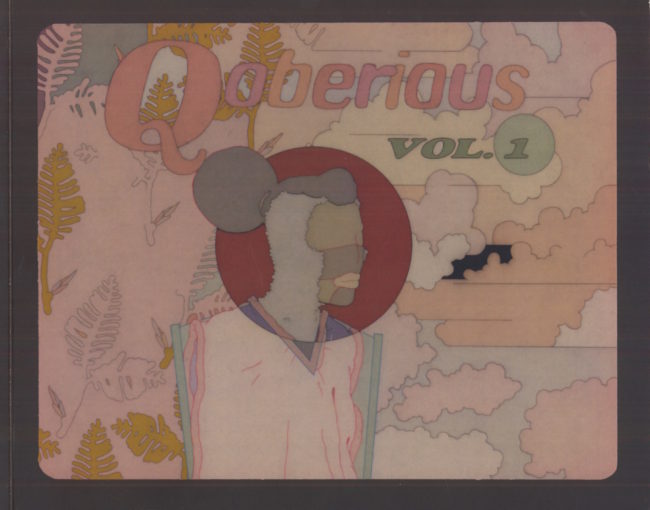 Seattle-based cartoonist D.R.T. is a figure cloaked in a certain amount of intrigue — in a recent TCJ interview he revealed that his name is Daniel, that he has a background in film and animation, and that he suffered a debilitating stroke at age 27 that forced him to learn to draw all over again, this time with his non-dominant left hand. His debut graphic novel, then, Qoberious Vol. 1 (released under the auspices of his own self-publishing imprint, Kvorious Comics),  is something that can only be called a true labor of love — emphasis on the “labor.”

Crucially, though, it in no way feels belabored — indeed, the hermetically-sealed reality D.R.T. creates literally seems to have flowed directly from his subconscious onto the page, and in many ways even feels like a work channeled from some other, perhaps higher, dimension. There is a raw immediacy to this book that has more than a hint of compulsion to it, the work itself imbued with an overwhelming sense of necessity that all its polish (and it is a highly polished volume indeed, with intricately-detailed art presented on thick, glossy paper between textured covers) can’t diminish. You know what they say — “if it’s in you, it’s gotta come out.” 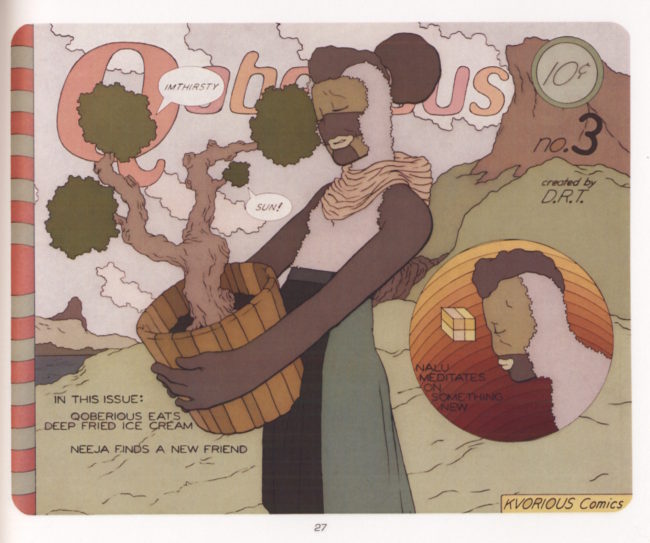 Just precisely what it is that has come out of D.R.T. is very much an open question, though — which is rather the point. His “people” aren’t really people as we know them — more humanoid/sheep hybrids. Likewise, the world they inhabit bears only fleeting resemblance to our own — I suppose it could be set in Africa, but what the hell? That’s only a guess based on the broadly-outlined tribal culture that seems to be the pre-eminent social paradigm on display. Even that’s up in the air, though, as direct inter-personal relationships are very much the centerpiece of this (extremely) loosely-constructed “narrative,” with any hints about a larger societal structure beyond, or even outside, of them being just that — hints.

You never really know, then, where or how characters exist in relation to each other here, which is dizzying enough in its own right, but that’s minor-league stuff compared to the simple fact that you, as a reader, never know where you sit in relation to, or within, the work itself. There is a deeply interpretive and frenetic introductory scene that drops us in at the deepest of deep ends, several pass-throughs necessary in order to even develop theories as to what might be going on, and then we find ourselves propelled through a series of short “single issues” that somehow connect with each other — but how they do so is more a matter of emotional and thematic connection rather than anything concrete. If you’re not up for a challenge, folks, then seriously — don’t bother. 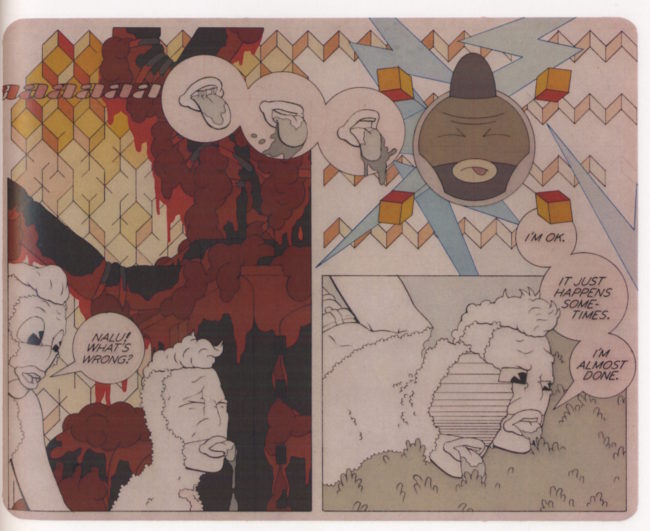 I’ll tell you this much, though, without a hint of either hesitation or equivocation — if you are up for a challenge, Qoberious Vol. 1 presents any number of them, each equal parts compelling, unnerving, fascinating, and perplexing. D.R.T. is on the record as saying that he wants readers to pick up something new every time they read his book, but it doesn’t even take that long — there is such a high-octane informational assault coming at you from all sides here that you pick up something new in terms of how to analyze and interpret not just each page, but each panel, before your eyes have even moved on to the next one. This isn’t an especially long work by any means, but it’s an unfathomably deep one, with abstract geometries, intensely personal fetishes, fluctuating identities, and truly alien scenarios somehow coalescing into something that can’t truly be understood — simply because it presents so many options for how to understand it all at once.

There are certain constants throughout, though, that can’t be denied — the alienation that D.R.T.’s characters feel not only from one another but within themselves no doubt speaks to his stroke-recovery experience; the dissolution of physical forms, of environments, of individual agency, of reason itself more than likely emerges from the same wellspring of hard-won inspiration; the transition of scenes from martial and combative to the vaguely (and sometimes less-than-vaguely) sexual draws clear parallels to the power-exchange dynamics inherent in each, and to the terror and ecstasy that accompanies the surrendering of the self. Connections exist here, perhaps even patterns, but don’t expect a trail of bread crumbs to lead you to them — they can only be intuited, felt, absorbed. 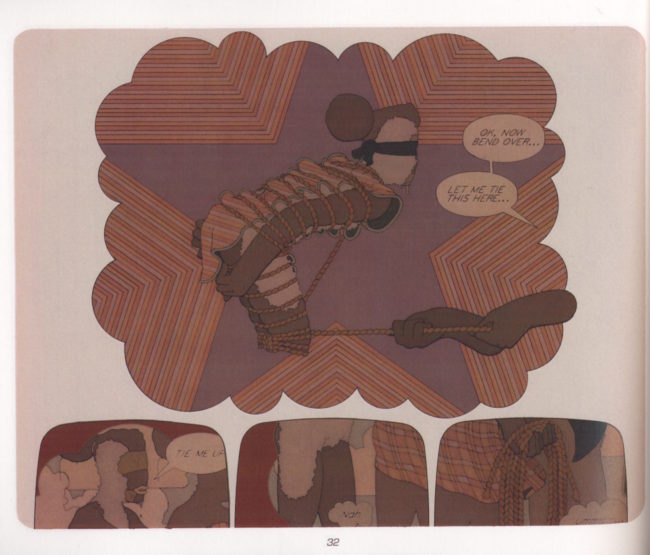 This is heady stuff, to be sure, delineated with rich and painstaking precision, awash in deep-but-muted hues that give the proceedings the aura of, I dunno, a box of old animation cels discovered in a dusty attic corner, a curiosity lost to time and unearthed by someone who can only begin to grasp at the obsessions, concerns, and yes, the fetishes of the person who created them. This is a comic that invites endless speculation, then dares you to grapple with the repercussions of the potential explanations you’ve come up with — that revels in contradictions as a way of forcing you to confront same within yourself — that questions the phenomenon of identity itself while prizing its acquisition as the one and only thing worth striving for. It is like nothing else anyone has ever created, and therefore quite unlike anything you’ve ever experienced. Nothing can prepare you for it. Nothing can guide you through it. Nothing can compare to it. Nothing can make you forget it.

A “strongest possible recommendation” is not strong enough for D.R.T.’s Qoberious Vol. 1. This may be the best $20.00 you spend all year; not just on comics, but in general. Order it directly from the cartoonist himself at http://kvoriouscomics.bigcartel.com/