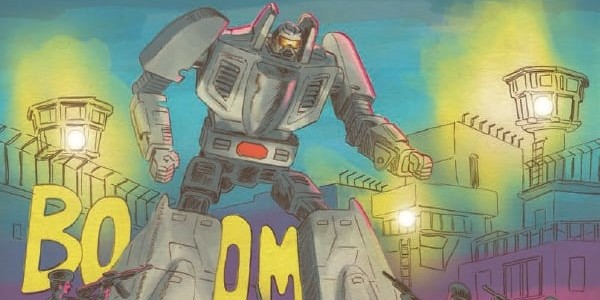 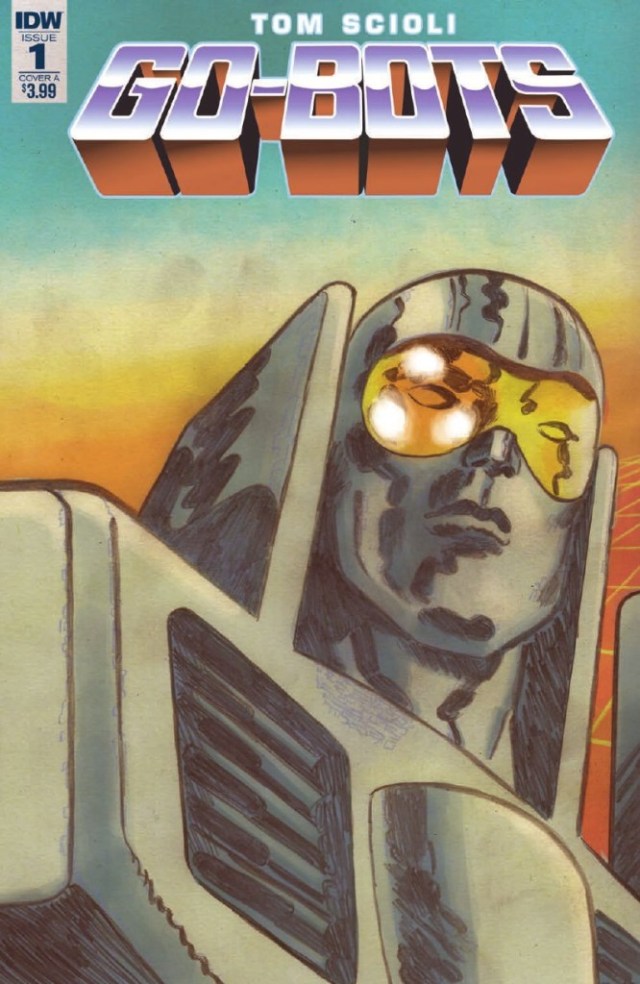 Even by the low standards of licensed toy properties, the Go-Bots don’t get much respect. Yeah, sure, they’ve had some animation revivals (even, I think, a feature-length film or two of the straight-to-video variety) and some comic books here and there, but a lot of that — while no doubt making their diminished fan base happy –was probably more about keeping IP rights semi-active on the part of Hasbro. No billion-dollar live action blockbusters for these guys. What can you get from them that you can’t get from the Transformers, right?

Leave it to Tom Scioli, one of the most innovative and distinctive cartoonists working today, to give the best answer as to what makes the Go-Bots different from their more celebrated — uhhmmm — peers: “The Go-Bots bleed,” Scioli tells us on this month’s IDW promotional blurb page. And if you need any more reason than that to convince you that this is the guy to breathe new life into this moribund franchise, then fuck it, you’re just no fun at all. 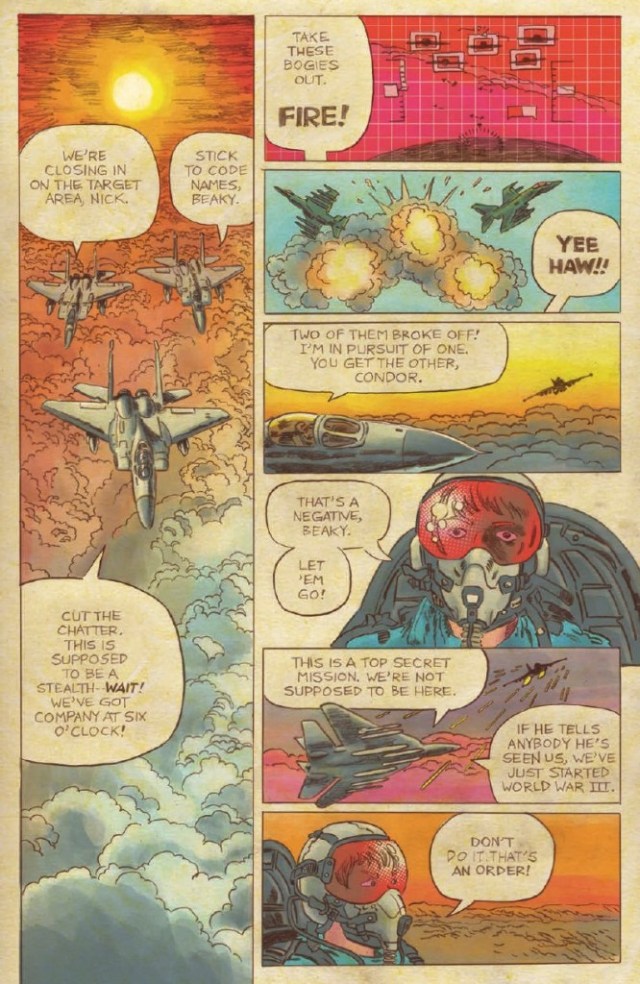 I admit that I come into Scioli’s Go-Bots #1 with precisely zero knowledge of the characters or their backstory, but it doesn’t matter all that much — when you’ve got a true virtuoso firing on all cylinders, they can immerse you into the world they are creating in near-effortless fashion, and that’s certainly the case here. Scioli’s vaguely “retro” style, which has never been shy about hiding its Kirby-esque influences, here immediately reaches new heights of accessibility, his densely-packed pages guiding the eye from panel to panel with naturalistic ease and energetic gusto in equal measure. Fluidity and bombast don’t often work in concert with one another, but here — oh, my, do they ever.

Yeah, the plot is simple: Members of a renegade Go-Bot faction are turning on their human “masters” and attempting to convince or coerce members of the “good guy” faction to do the same, but a series like this was never going to be about story complexity. That, however, in no way precludes it from having visual, emotional, and maybe even thematic complexity — frequently, again, all working together in concert. 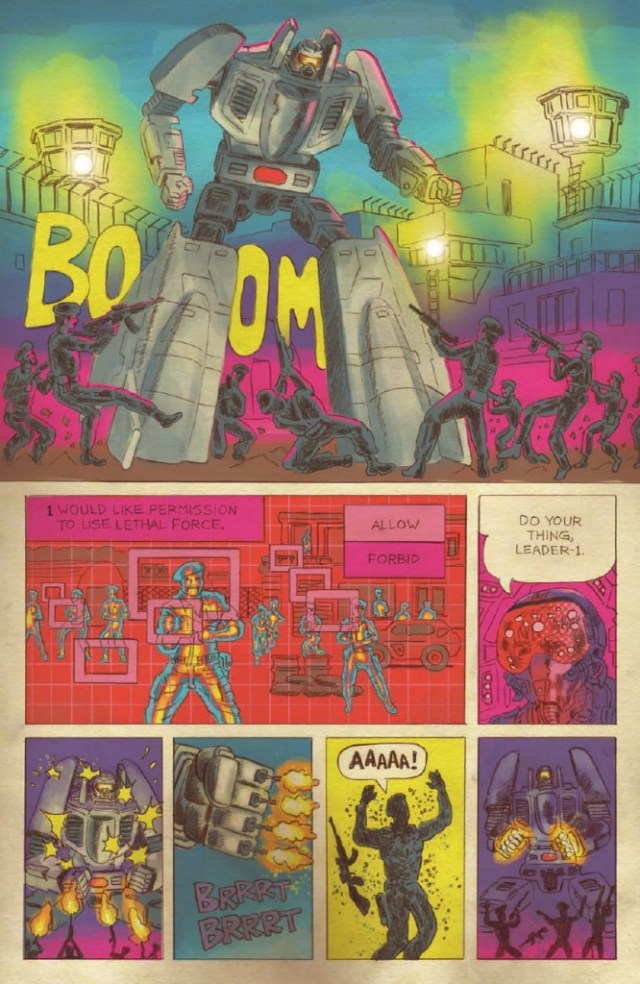 When a Scioli Go-Bot lands on the ground, for instance, you feel it. When bullets riddle a body, you feel that, too. But not all the impact here is physical — there’s a betrayal of a principal character by her mentor and friend that legit hurts even though we just met both of them. There are moments of levity that genuinely feel fun and carefree. The bright, childlike imagination on display here is unmistakable, to be sure, but it’s never feels even the slightest bit calculated, never mind cloying. Earnest? Sure. But undeniably honest. 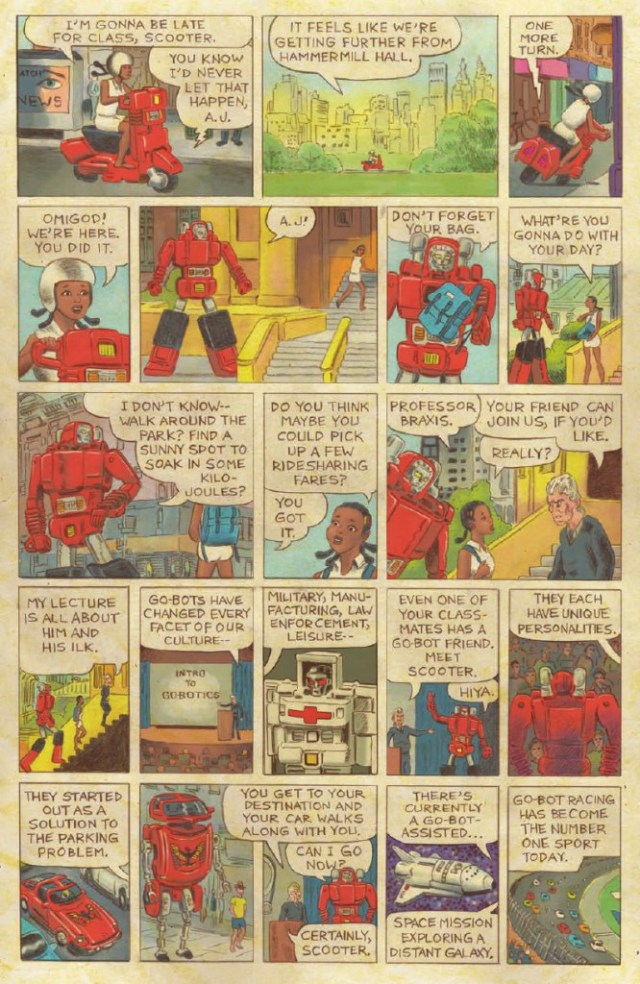 And maybe that spirit, that ethos, that raison d’etre is what struck home most to me while reading Go-Bots #1, even more than the breathtaking illustrations, amazing layouts, vibrant colors, dynamic action, and pitch-perfect characterization. In so many ways, this book functions as an entirely unintentional, but nevertheless necessary, antidote to so much that’s wrong not only with nostalgia and revival, but the “dudebro” faction of independent/”alternative” cartooning: no disrespect intended toward Ben Marra (who supplies one of the main “retailer variant” covers to this issue, the other being by Dash Shaw), Josh Bayer, or their various and sundry All-Time Comics cohorts, but there’s no sense here that this might all be some “piss-take” on Scioli’s part. There are no ironic winks and knowing nods to the audience. There’s no attitude, even at the margins, of “yeah, we love this stuff, but let’s not kid ourselves — it is what it is.” Scioli knows what it is. He understands what it is. He loves what it is. And that love positively radiates off each and every page of this comic.