Home  ⁄  The Wire  ⁄  [A VERY SPECIAL EPISODE] ‘POPPY’S BY THE TREE:’ WHEN ‘MARRIED … WITH CHILDREN’ BECAME A SLASHER FILM

Before the Fox Network became infamous for reality television about police officers busting up the living rooms of drunken delinquents in dirty football jerseys, snarky animated families, and before ex-pro football players would sling clips of kids and animals gone wild, Fox was such a fledgling network that most viewers couldn’t even get reception for on their televisions. But on April 5th, 1987 — MARRIED … WITH CHILDREN changed all of that. It was Fox’s first scripted series, the untamed wild child that updated ALL IN THE FAMILY for the Reagan–era, rail bumping, neon clad boob-tube addicts. It was, and still is, a show with a black-comedy streak running through its DNA. The show was rough, the show was mean, and the show was refreshing and honest for people who were tired of cookie-cutter antics clogging up the airways. It was also way better than ROSEANNE and doubly, featured less goddamn racists. Revisiting the show, it’s apparent that some of the sexist, piggish attitudes afforded by the show don’t hold up as well (though I will say that, to the show’s credit, both genders get in on the lusting and drooling at the many babes and beefcakes that wandered onto set). It was gleefully offensive and sweet as sugar all at the same time. 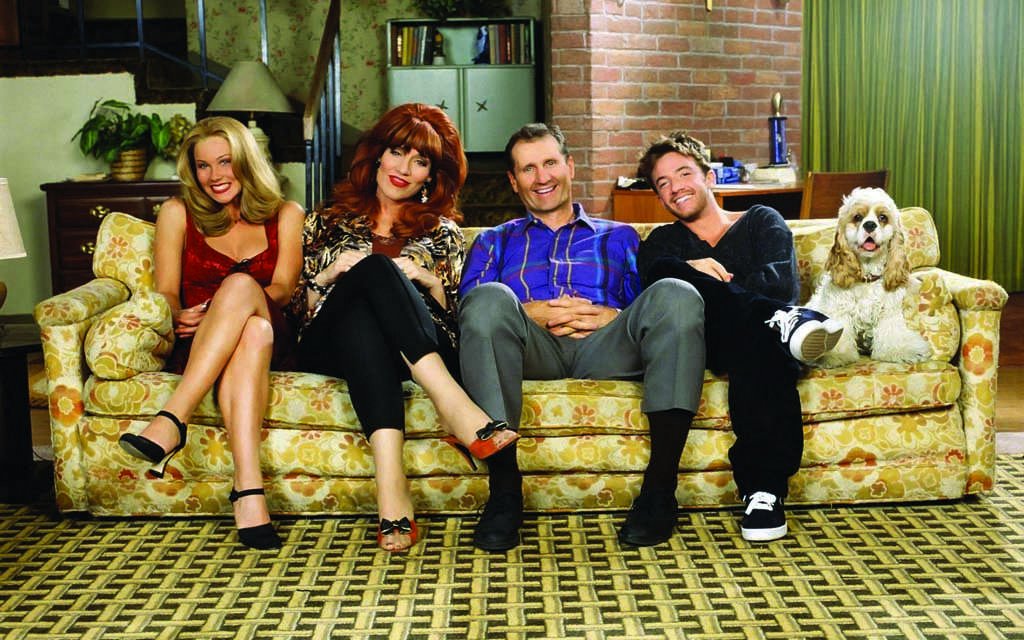 MARRIED … WITH CHILDREN is one of my favorite sitcoms of all time (the other being NEWSRADIO), so you can imagine my complete surprise and happiness when I discovered that all eleven seasons dropped onto Hulu (with Frank Sinatra’s cozy rendition of “Love and Marriage” fully intact after being largely absent from home-video releases of the series, rather than that chintzy, terrible orchestral whatever we got). Anyone who knows me knows how much I love slasher films, so it’s no surprise then that when I first dropped the show into my queue, the first pair episodes I revisited was “Poppy’s by The Tree,” the two-part Season Two premiere also known as “The Time The Bundys Got Stuck In A Slasher Film.”

By 1987, the slasher market was mostly profitable on home-video rentals, but the market was winding down and the over-saturation of the sub-genre was rapidly running its course. Sure, you had theatrical hits like FRIDAY THE 13TH, but it was headed to the tail end of its Paramount run, and though Freddy Krueger was at the height of his fame, battling the last of The Elm Street Kids in DREAM WARRIORS, you still had stuff like SLAUGHTERHOUSE, BLOOD RAGE, SLUMBER PARTY MASSACRE II and SILENT NIGHT, DEADLY NIGHT PART 2, all admittedly fun films, but not exactly the watermark for big box-office bloodbaths.

It’s not a surprise that television series often loved to do high-concept horror episodes – in fact, “And Then There Was Shawn,” a later-season BOY MEETS WORLD episode, parodied recent mega-quakes to pop culture like SOUTH PARK, SCREAM, and I KNOW WHAT YOU DID LAST SUMMER. In 1987, we had a slasher parody, the criminally fun and underrated RETURN TO HORROR HIGH, which still had the slasher elements but was a goofy take on slashers (but skewed a little more serious, versus the infinitely enjoyable STUDENT BODIES). It’s fitting then, by the time “Poppy’s by The Tree” aired on September 27th, 1987, audiences had to have loved the robust mix of horror and comedy.

With MARRIED … WITH CHILDREN being a comedy, it’s no surprise that the comedy elements are still the forefront of the episode, but the episode still managed to creep me out when I was a kid. “Poppy’s by the Tree,” written by series creators Michael G. Moye and Ron Leavitt and directed by Linda Day (who racked up thirty-two episodes in the series’ run), concerns the boorish Bundy clan visiting a cheapo motel, the titular Poppy’s by The Tree, in America’s Vestigial Tail – Florida – that’s been under siege by an axe-wielding maniac who picks off shitheel tourists every five years, starting in 1967, 1972, 1977, 1982, and bringing us to the then-present day of 1987. Naturally, cheapskate Al (“Al, Honey, you promised this year we could take a real vacation. Y’know, someplace where we don’t look out our windows and see chain gangs working”) takes his family to the motel unaware of the potential danger inherent in sleeping in the bedbug-riddled establishment, and even more unaware that the local yokels are taking bets as to when the vacationing imbeciles are going to fall prey to the killer.

Throughout most of the first episode’s run-time, the Bundys are painfully unaware of the predicament that Al has placed them in, often taking the piss out of the bumpkins that populate the tourist spot. In a way, it often feels like a community-theatre stage production of FRIDAY THE 13TH, with Al and the family acting like the suburban slobs versus the greasy denizens of Poppy’s by The Tree. There’s a wonderful sight gag where Bud’s bed in his room has a manual lawnmower just placed on it. The usual shenanigans follow – Al’s a horndog when he sees the sexy housekeeper, Peg nags Al for sex, Bud pretends to be someone impressive to bag a girl, and Kelly’s off drowning herself in the comfort of the local stud. The show highlights the disregard with which the Bundys treat everyone – they destroy the Rhodes’ luggage, and Al talks down to the locals with every breath he takes. Also, the downright apathy the locals have towards the Bundys getting attacked and potentially killed is gut-busting. When Al asks if one of the motel folk would take the family’s picture, he responds “Yeah. They’ll be wantin’ one for the paper. ”

As mentioned before, they spend a large time taking bets on who will get killed and practically urge the Bundys back into immediate danger. Also, the direct disregard for each other’s lives is always funny as hell. Kelly: “Last born, first torn.” There’s never a funnier sight that Al covering his eyes, shrieking and stabbing wildly into potential killer-hiding spots with admittedly, the world’s worst weapon: a plastic fork. Also, there’s a terrific joke about how Floridians are impressed with low-rent “celebrities,” when the weekend’s biggest draw is an event at the high school where locals can meet the Man Who Met Andy Griffith, who SPOILER! turns out to be the killer, to which the locals give zero shits about. In their eyes, it’s better to have someone who’s a killer and a celebrity rather than someone who’s neither at all. 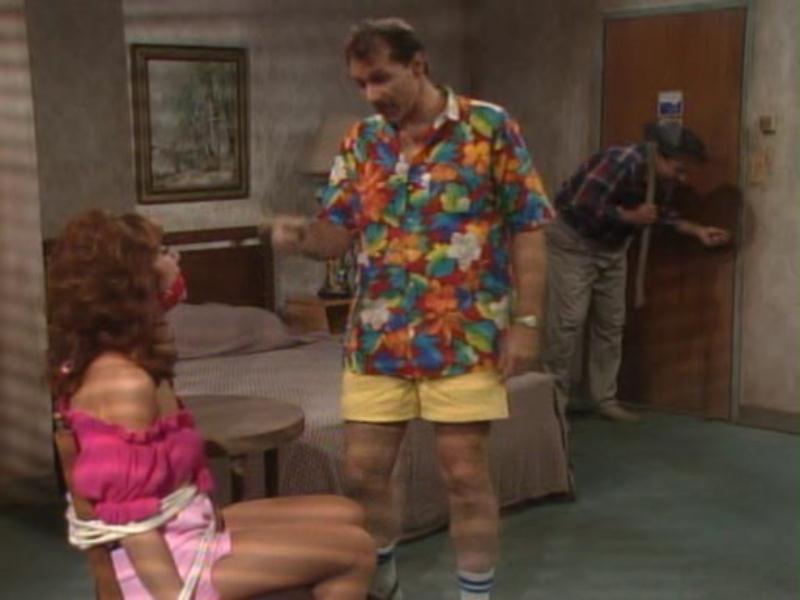 From the start, it’s clear that the writers were going to have fun with the audiences, with the black-and-white prologue where two loudmouth louts are killed, to the tune of “Ode to Billie Joe,” by musician Bobbie Gentry, complete with a fourth-wall-breaking card on screen reassuring the viewers that the show will be back to color in just a moment – a nice jab at the country-fried, low-brow aesthetic that the show often waded in. But it does adhere nicely to the makeup of slasher films, the prologue is all sinister music and POV shots, and after the killer has made his presence known to the Bundy clan, their tires get slashed and a storm comes in, washes the bridge out, and closes off escape from the island, something that gives shades of isolated slashers like APRIL FOOLS DAY and A BAY OF BLOOD. Sure, there’s a sheriff there, but he could give a shit about the Bundys.

The episode is rife with red herrings aplenty, from the cook wielding a meat cleaver, to Kelly’s boy-toy toting around an axe. There’s also a nicely creepy shot in the closing of the first episode, where we see the killer sliding under Al and Peg’s bed, long before they know he’s even there — he ultimately makes his presence known by jabbing a machete up through the bed in between Peg and Al. The killer’s motivation is actually kind of tragic (his father worked himself to death for asshole tourists, and his mother committed suicide, leaving him all alone), but the motel folk still treat him like he’s a harmless oaf.

For fans of genre titles, there’s Ian Patrick Williams, who appeared in such cult properties as Stuart Gordon’s RE-ANIMATOR, DOLLS, and the pilot for FREDDY’S NIGHTMARES playing the crusty cook Beany, or Gary Grubbs (Fred’s dad on ANGEL) as Delbert, the town’s kleptomaniac and deputy. And playing the killer is Vic Polizos, who appeared in a whole mess of horror films like C.H.U.D, GRAVEYARD SHIFT, and NIGHT OF THE CREEPS.

“Poppy’s by The Tree” holds up just perfectly, a;though it’s got a bit of a slower pace, but things just moved slower in the ‘eighties. It should be appointment Halloween viewing, or just regular viewing if your horror-movie binges aren’t directly tied to the fall fright season. The Bundy clan didn’t always do horror-centric episodes, though there was a Season Eleven episode with Robert Englund playing the Devil called “Damn Bundys.” And horror fans would do well to remember that redneck connoisseur Joe Bob Briggs appeared alongside Kelly in several Verminator commercials as “Billy Ray Wetnap.”

The entire series is streaming on Hulu. Take that stroll down memory lane.