Home  ⁄  The Wire  ⁄  [GRINDHOUSE COMICS COLUMN] IS THIS GUY FOR REAL? THE UNBELIEVABLE ANDY KAUFMAN 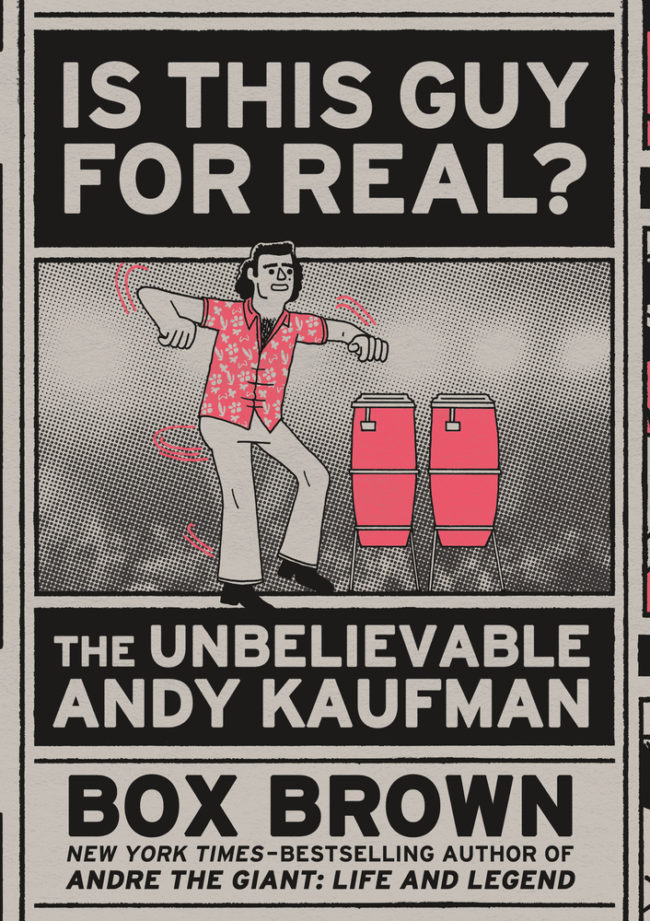 Don’t look now, but it appears as though Box Brown is making a concerted play for the title of “Best Biographer In Comics” — and he’s doing it by telling the life story of a guy who held a title of his own, that of “World Intergender Wresting Champion.”

Yup, dadaist comedian Andy Kaufman is back under the media microscope in a big way, and it makes all the sense in the world that the cartoonist who chronicled the exploits of Andre The Giant and the history of Tetris in his previous volumes for First Second (who also publish his latest) would be the guy to do it. Kaufman’s never really left the spotlight entirely, of course — his tragically early death, combined with his singularly bizarre (and I mean that in the best possible way) career are more than enough to ensure that his legend will always carry on — but detailed looks at the man behind such memorable characters are Latka Gravas and Tony Clifton have been few and far between. Academy Award-winning director Milos Forman gave it his best shot with MAN ON THE MOON nearly twenty years ago (the title being taken from R.E.M.’s song about Andy — which also never seems to go away completely), but despite a stellar starring turn from Jim Carrey, who absolutely inhabited the role (or should that be roles?) of Kaufman, I think most would agree that the film didn’t quite manage to pierce the veil of its own subject. And so now it falls to Brown to humanize this most alien of talents, and with his graphic novel Is This Guy For Real? The Unbelievable Andy Kaufman, he (spoiler alert) manages to do it — at least to a greater degree than has been done in the past. 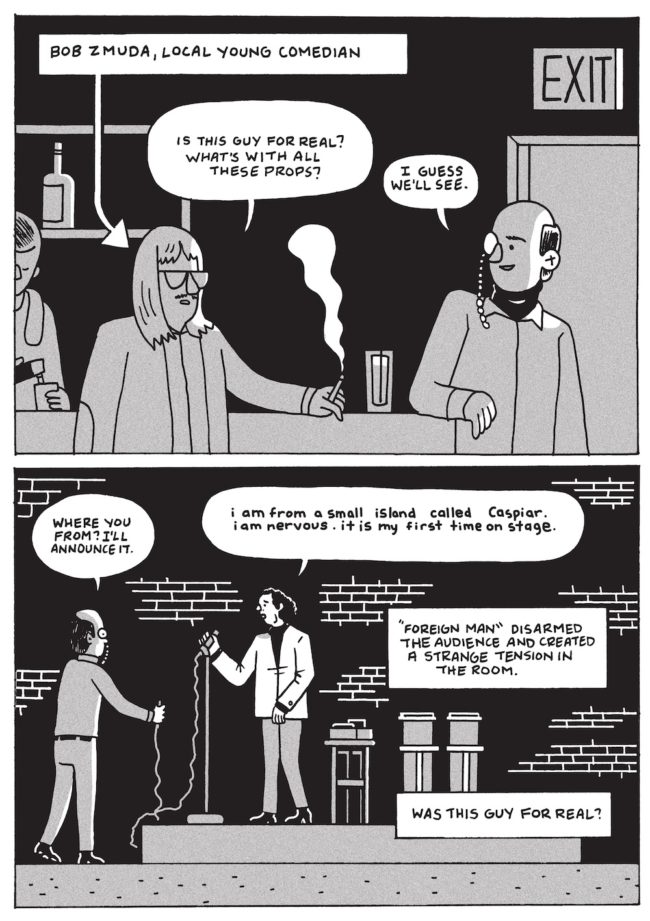 The fleshing-out of important members of “Team Kaufman” such as writing partner/Tony Clifton fill-in Bob Zmuda, girlfriend Lynne Margulies, and manager George Shapiro go some way toward answering the books’ titular question for us, as does a more-than-cursory examination of the future comic’s early years and of his relationship with his family throughout his life. Brown being Brown, though, you pretty much know going in that one particular aspect of Kaufman’s career is going to get the most attention — his turn as a pro wrestling bad guy.

Cue some rather curious side-bars — such as Brown devoting something like 15 pages to a re-telling of the career of Kaufman’s main “nemesis,” Jerry “The King” Lawler, as well as a relating of the history and minutiae of Memphis regional wrestling in general — that very nearly run the book off the rails, and yet things come back together more or less just in time to prevent your interest from waning, even if it is rather curious, to say the least, that Brown spends more time on the Kaufman/Fred Blassie one-off video My Breakfast With Blassie than he does on Kaufman’s five-year stint on Taxi. Go figure. 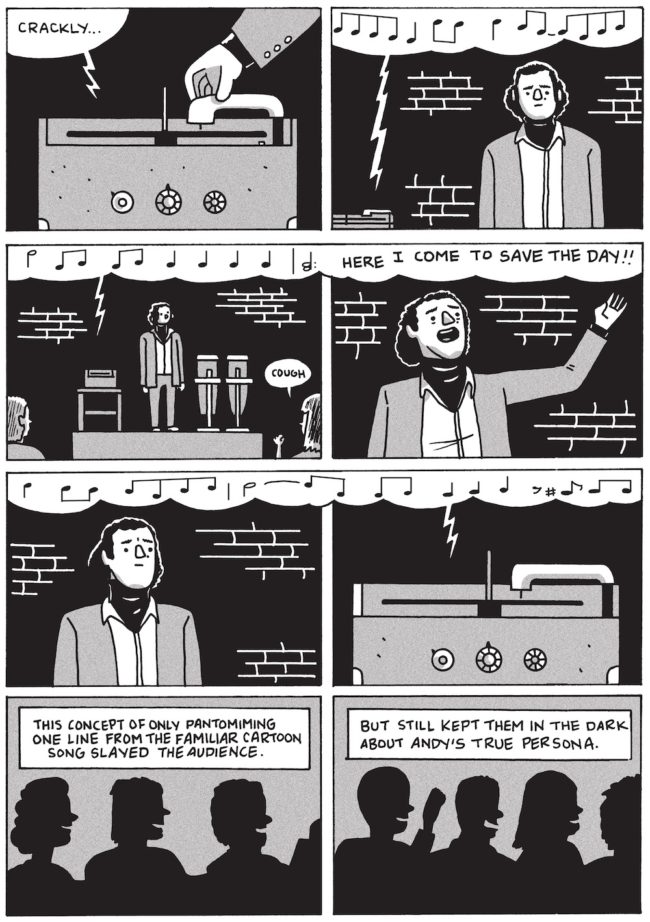 Still, for every lapse in judgment like that, there’s at least one strong choice that Brown makes to ensure that your faith in his storytelling abilities never wanes. He makes it clear, for instance, that yes, Kaufman’s entire “thing” was an act (or, if you prefer, a series of acts), and shows enough of the comedian away/apart from his various ingeniously-constructed personas so that readers finally have a fairly solid handle on where Andy ends and, say, the “foreign guy,” or the misogynist wrestler, begins. This takes a deft touch, to be sure, but the disarmingly straight-forward script is aided in no small part by Brown’s smartly minimalist cartooning that draws special attention to differences in body language, facial expression, etc. that let you know when various “switches” are “flipped.” No one will ever accuse Brown of having a hugely varied repertoire as an illustrator, but his rote and basic forms and figures carry a degree of nuance that their ostensible “simplicity” wouldn’t necessarily be assumed to be capable of conveying. There’s also something of the frank and absurd to Brown’s style that fits this material perfectly — as if something utterly unique unto itself is being communicated in a visual language we can all understand. 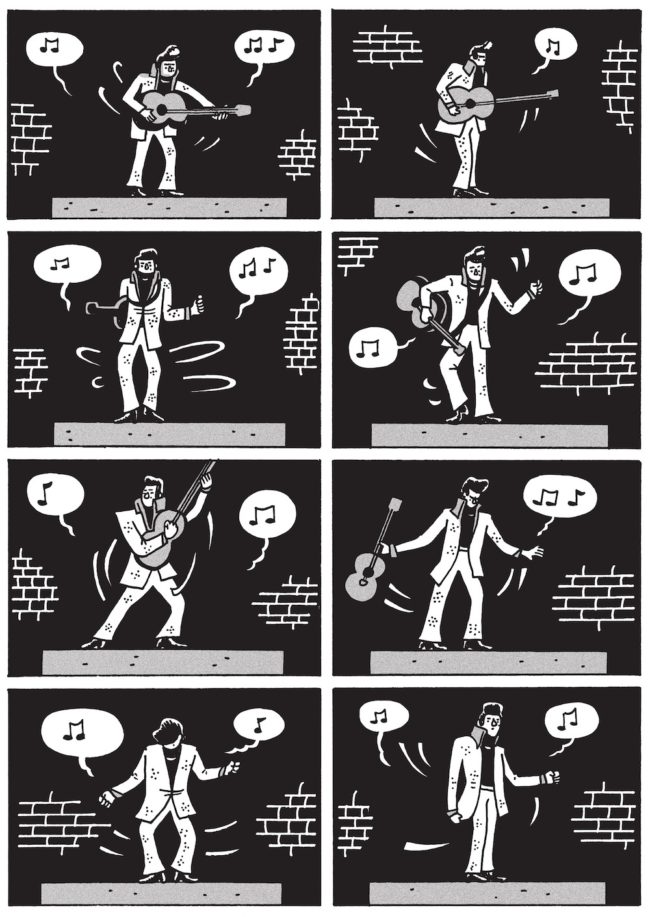 A style as no-frills as Brown’s is also highly adaptable, and so whether Kaufman is portraying Elvis, Latka, Tony Clifton, or Lawler’s foil in the ring, the panels transition into each role nearly as seamlessly as did the comic himself. At the end of the day, though, Box Brown’s greatest triumph with Is This Guy For Real? The Unbelievable Andy Kaufman lies in the fact that, perhaps for the first time (and thanks, no doubt, to the assistance and participation he was able to obtain from the late performer’s family, particularly his brother, Michael), he finds a way to show Kaufman — at every phase of his life and career, from his earliest years to his ascension of showbiz’s heights to his painful final days — as his most complex and compelling character of all: himself.