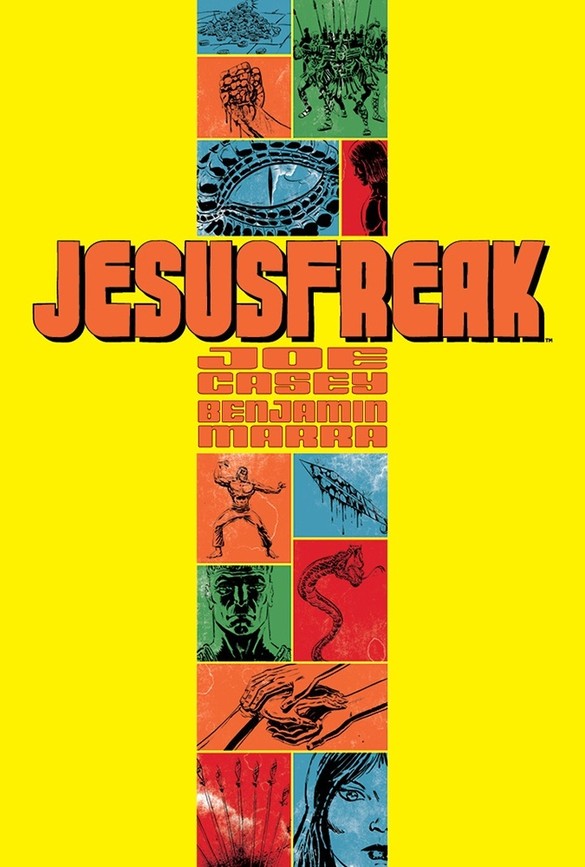 I’m not sure what it is about “Bible comics,” but there’s something appealing about the whole notion, even to a devout non-believer such as myself. Whether it’s the fire and brimstone of a Jack T. Chick or the scaled-down intimacy of a Chester Brown, I’m down for a sequential-art spin on the Good Book anytime.

So yeah, Joe Casey and Bejamin Marra’s new Image graphic “novel” (length-wise it’s probably generous to call it even a novella) Jesusfreak was something I was intrigued by from the moment it was first announced. Both creators are hit or miss for me — Casey seems to do his best work when he’s in pure “homage mode” (Godland and Captain Victory And The Galactic Rangers both being riffs on The King, Sex reading like an answer to the question “what if Howard Chaykin did The Dark Knight Returns?), and ditto for Marra, who can get awfully self-consciously “cheeky” when not reined in by the at least the pretense of trying to pay respect to his Bronze Age influences.

In that respect, then, the idea of the two of them sharing a sandbox (or maybe that should be a soapbox) almost has an air of inevitability to it, and one would assume they’d play well together. Which, I’ll state right here in the early going, they most certainly do: you can always tell when a pair of creators is on the same page as they go about the business of — errmmm — filling up the page, and these guys are simpatico in the extreme.

Points for that, then — Casey is writing like Doug Moench, Marra is drawing like Paul Gulacy. And Jesus is their very own Shang Chi.

Yeah, I missed that part of the Bible, too — where the son of God goes on a “vision quest” within himself, emerges a super-powered martial arts warrior, and fights a fucking lizard man. But hey, here it is. And for all its thematic and aesthetic coherence, I’m wondering why I shouldn’t simply have read my old Master Of Kung-Fu back issues instead. 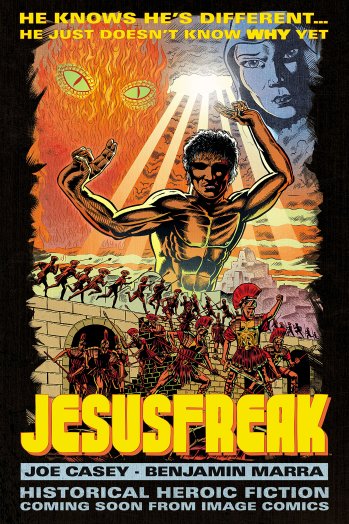 There’s a great deal of mystery surrounding Jesus’ “wilderness years,” of course — the period in between his birth and the weeks leading up to his crucifixion that, funny enough, all four gospels just blow off completely, and Casey does his level best to fill in some of those blanks before having his Sonny Chiba iteration of the son of man arrive at his crucial first meeting with John the Baptist, but once we get past all that, the book’s rationale more or less completely disappears : we’re not in “what happened during the time we don’t know about” territory, we’re in “what happened that we don’t know about during the time that we do know about” territory, and I can think of a lot more interesting ways to answer both of those questions than what we’re given here. 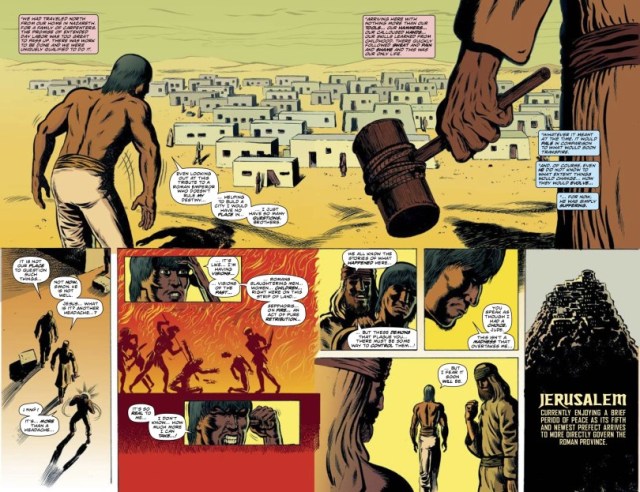 Which probably sounds like a harsher condemnation than the book deserves given its sheer technical merit: Casey scripts with a kind of forced-but-eminently-readable “purple”  tint to his prose, Marra adheres not just to the style but to the visual storytelling smarts of the aforementioned Mr. Gulacy and the originator of his artistic line, Jim Steranko, and Brad Simpson’s hues are just plain incredible, modern technology in service of approximating the look of the best of done-by-hand colorists of years gone by, such as Steve Oliff. It all reads and feels like an entirely sensible updating of a 1975 Marvel comic.

Which is no bad thing to be, mind you — but deploying this more-than-competently-executed bit of “retro chic” in service of the most “retro” story ever told? Sorry, but some sort of reason for existing in the first place would be helpful at this point, and all I see here is Casey and Marra stretching an “edgelord” premise out way too far. Those ideas you come up with over a few beers with friends at a party? Not all of them are the best use of your creative energy, to say nothing of your time. 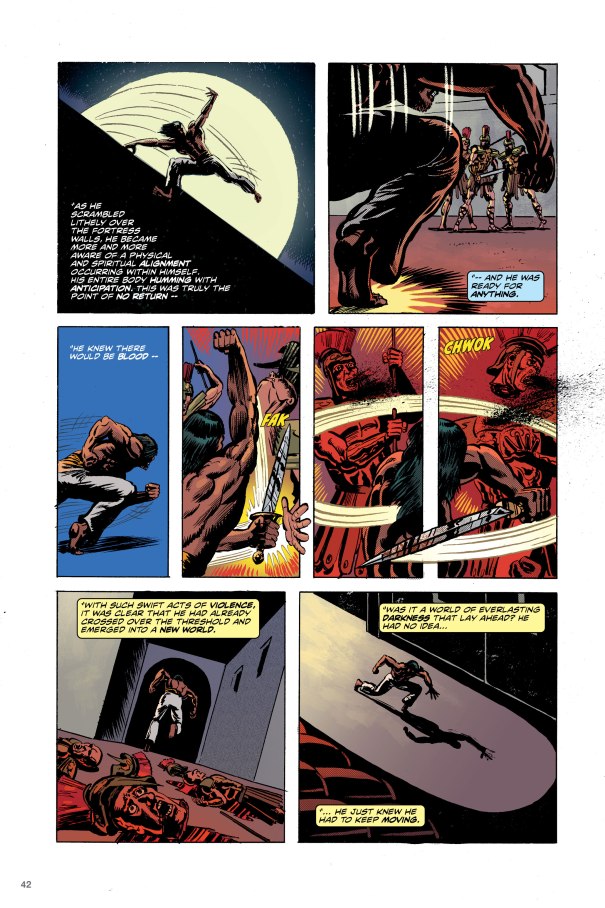 All of which is to say that Jesusfreak reads precisely like the vanity project it no doubt is — something Casey himself even states pretty plainly in the book’s introduction, wherein he essentially challenges readers to find any sort of deeper meaning or hidden subtext in this work and lets them know in advance that they’ll come up empty, because all he and Marra were trying to do was make the sort of “fun” story they’d both enjoy reading themselves.

Then, in his afterword, he talks about comics like Watchmen and says that he hopes this comic will get people to think in much the same way that one did. So, ya know, which is it? Tests of one’s faith are constant in this book, but it’s the way that it lacks any sort of clearly-discernible central thesis beyond “my dude, wouldn’t it be cool if Jesus kicked ass?” that’s most likely to test your patience here.

Not that making something just because you can is necessarily bad. Quite the opposite, in fact. But it’s a lot better when the work produced bothers to address the issue of its own raison d’etre and maybe even endeavors to find it. Failing that, it could at least opt to convince its audience that they might be able to take something from it that the creators didn’t necessarily intend for them to, but nope. Casey and Marra let it be known they’re not putting any particular meaning into this thing, don’t even want to pretend that they are — then they say they hope you came across one regardless. But if you haven’t taken the time to examine why you want to do something, then why should readers give one good goddamn whit what it is you’ve come up with, much less waste their time mining the non-existent depths of a work that openly admits it has none?

I dunno. Jesusfreak isn’t actively bad by any means, but that’s because it really isn’t actively anything. Two guys figured they’d take a crack at turning a small portion of the Bible into a ’70s Marvel book, and they managed to pull it off. I’m not going to damn them to the pits of hell for it, but I’m hardly going to jump up and yell “hallelujah!,” either. At the end of the day, well-exceuted “edgelord” bullshit is still “edgelord” bullshit.