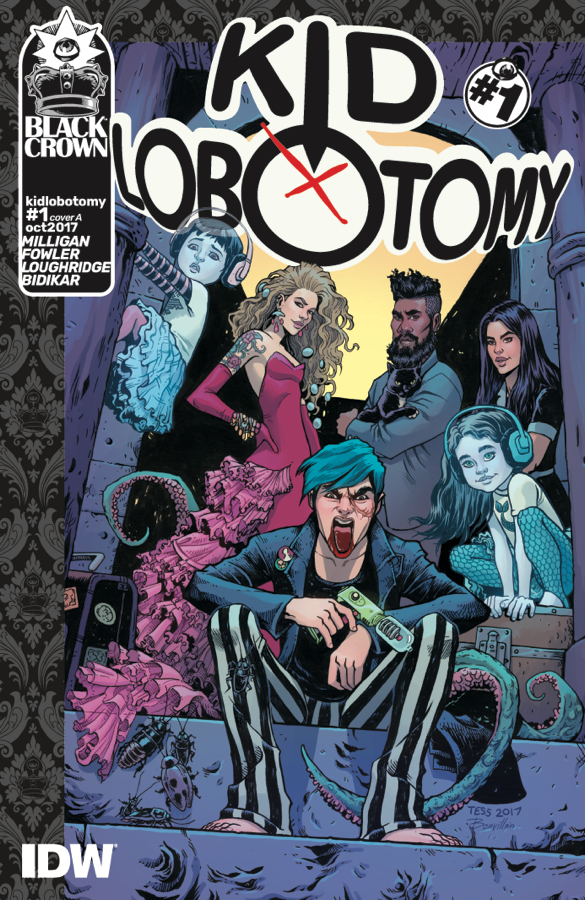 When Shelly Bond was let go by DC as head honcho of their Vertigo label, it marked the end of an era — the last member of that venerable imprint’s original crew had left the building, and its future was suddenly looking very uncertain indeed.

Truth be told, it still is — Jamie S. Rich took the reins for a time, and now they’ve been passed on to, if memory serves me correctly, Mark Doyle and Andy Khoury, so we’ll just have to see what happens there. Bond, though, for her part, landed on her feet pretty quickly — IDW offered her a line of her very own to oversee, and after a year (-ish) of planning and preparation, Black Crown is finally here. But for those either hoping or worried that a simple Vertigo redux was what we were in store for here, it’s time to get stressed or relax accordingly, because this looks to be a very different beast, indeed.

Black Crown’s scope seems equal parts ambitious and grounded — various and sundry creator-owned titles that tell very different stories about very different characters? I’m all for that. Setting them all in an interconnected “universe” — hell, an interconnected town or even neighborhood — with the titular Black Crown Pub (I think, then, it’s fair to assume these series are all taking place in the UK)  in the middle of the street so they can all meet up on occasion, share a drink, and maybe get in some trouble together? I’m taking a “wait and see” approach on that conceit. As long as it doesn’t limit the kind of stories on offer, chances are that everything should be fine, and Bond is on record as saying that she wants to imbue her new range with a “punk rock sensibility,” which I find a promising (if malleable) statement, but let’s be honest — I’m in my forties, and an ethos of that sort is pretty much guaranteed to appeal to me. Will these books have any “drawing power” for readers younger than me, though? I guess that depends on who’s making them.

In that sense, then, kicking things off with a series scripted by veteran “British Invasion” author Peter Milligan is something of a curious choice. Milligan’s responsible for what I still contend is the best thing (as well as one of the first things) Vertigo ever published, Enigma, and he had a solid decade or so of nothing but quality creative output, but things have been pretty hit-or-miss with him in recent years. The Names, for instance, was a tense and multi-faceted conspiracy thriller, but New Romancer and Terminal Hero were decidedly middling affairs, and the less said about The Discipline the better. What, then, are we in store for with Kid Lobotomy, Black Crown’s debut offering? 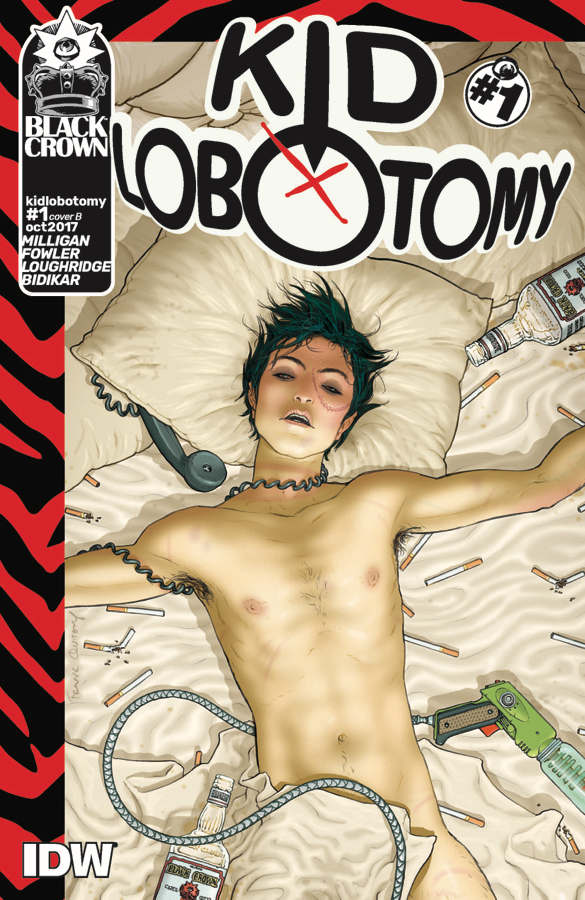 Well, one issue in, I’m not really sure we have much of an answer. Milligan’s on comfortable, Kafka-esque “mindfuck” grounds here — his best work has always combined elements of the surreal, the post-modern, and the absurd – but our eponymous Kid doesn’t offer much to latch onto as a character, and what little we firmly can piece together doesn’t necessarily seem likable. He’s got an unhealthy sexual fixation on his sister — who may or may not exist, just like everyone else here — but I guess that (god, I don’t want to phrase it like this, but) runs in the family given that their father (known only as “Big Daddy”) does (or did?), as well. The old man’s infatuation with his little girl didn’t prevent him from passing on his dilapidated hotel, simply branded as The Suites, on to his mentally and emotionally unbalanced son, though, so yeah — what we have here is a rich reprobate in the hotel business who wants to fuck his daughter but is very much an obvious sexist in matters both business and personal. Next stop, the White House.

All of which makes Kid, what? Our stand-in for Donald Trump Jr.? Somehow, though, I don’t think any of Trump’s dipshit kids would be dropping the Burroughs and Bowie references that our protagonist does here, nor would they be opening the family’s hotels to the bottom rungs of the economic ladder the way Kid does, so I might be stretching the analogy past its breaking point, and that’s even before we get into the shape-shifting maid. It all seems like it could be so very intriguing — the only thing missing is a “hook” to make us care about these characters (imagined or otherwise) enough to be intrigued by them. 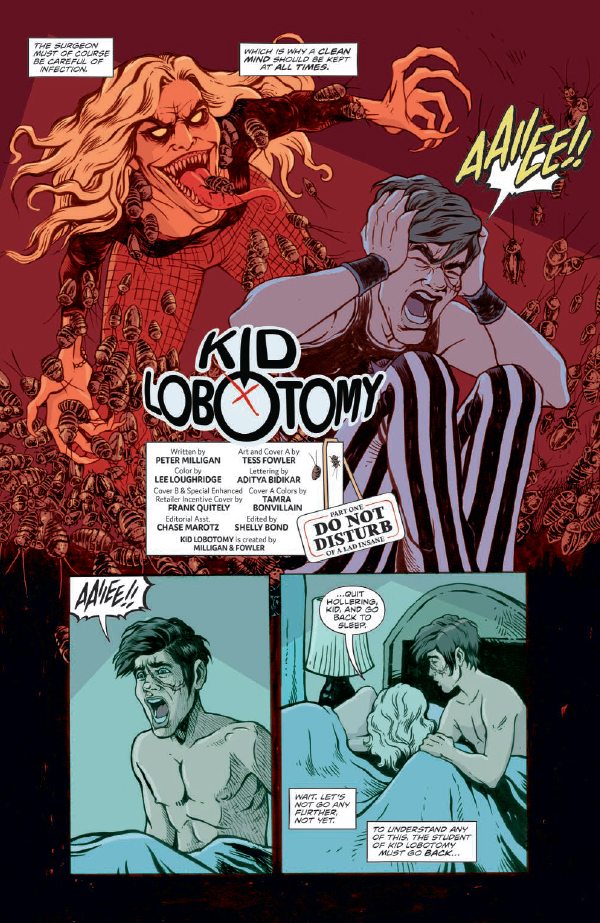 While misgivings abound on the story side, though, I’m nothing but enthusiastic about the art. Former Rat Queens illustrator Tess Fowler handles pencils and inks here, and her style is matter-of-fact enough to feel comfortably at home delineating scenes both down-to-Earth and deep inside the disturbed id. She doesn’t go in for flashy visual gimmickry, content instead to let her figure drawing and strong characterization (her faces say a hell of a lot) tell a story rather than bowl you over. This kind of ego-free illustration is as refreshing as it is effective, and while her backgrounds can be sparse (bordering on the altogether absent), that’s not necessarily a strike against her in this book, as it helps establish the environment of The Suites as being a vacuous, foreboding space. Lee Loughridge’s colors accentuate mood and atmosphere without, again, upstaging either, and so we needn’t worry about anything on the art front with this series — we’re in very good hands indeed. 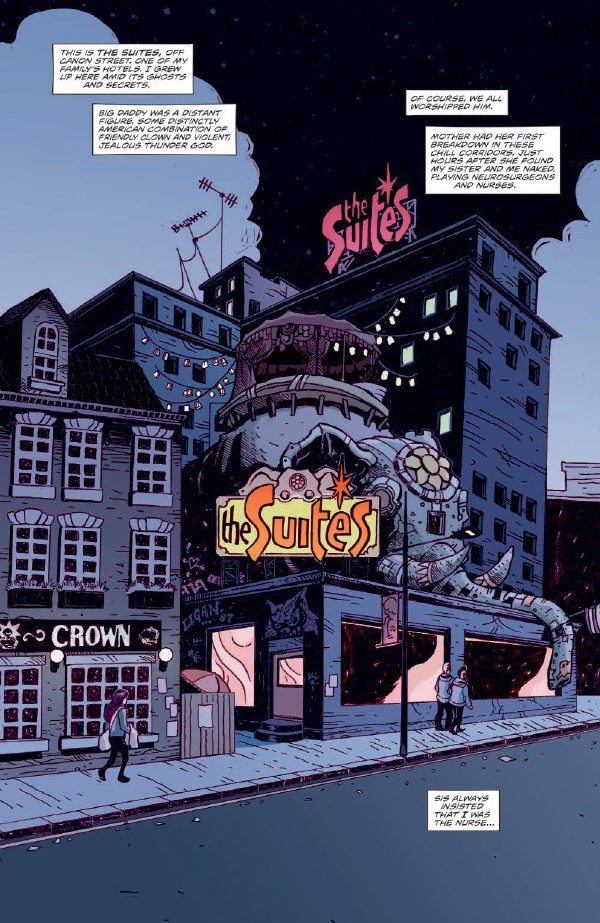 Perhaps, then, cautious optimism should be the order of the day here, both with Kid Lobotomy itself and with Black Crown as a whole. Two really effing good covers (A from Fowler and colorist Tamra Bonvillain, B from modern-day legend Frank Quitely), a quality physical product that gives you plenty (glossy paper, heavy cardstock covers) for your $3.99, nice art, and a story that at least could go to places both interesting and uneasy are enough to keep me around for at least one more issue of this book, and I’m downright jazzed to give next week’s Black Crown Quarterly #1 anthology a shot. An unqualified “buy” recommendation would be a reach, it’s true, but if you’re the kind of reader who’s willing to allow a new line to have a few growing pains as it coalesces into whatever it’s going to be in the hopes that said “whatever it’s going to be” turns out to be something very-good-to-great, then hey — now may be a good time to be not just interested in, but downright excited by, the possibilities offered by both this series and this new imprint.