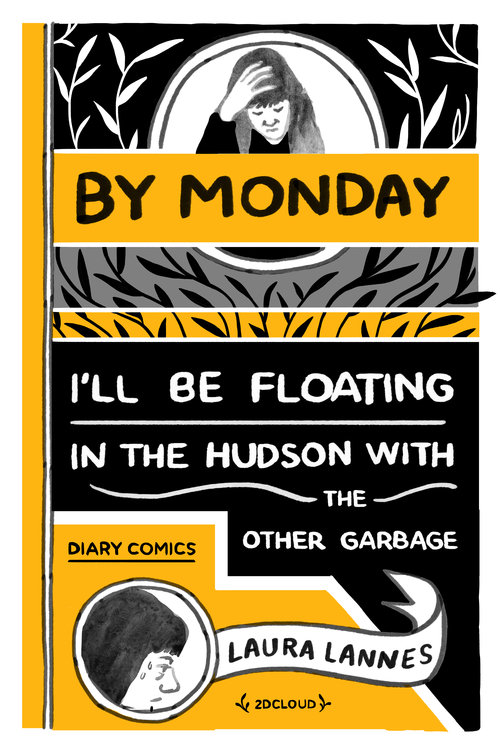 The work of cartoonist Laura Lannes is as raw as it gets. Rendered in tightly-framed watercolors that leave plenty of negative space for readers to fill in the “blanks” (both physical and metaphorical) for themselves, her 2dcloud-published graphic memoir By Monday I’ll Be Floating In The Hudson With The Other Garbage is something a whole lot more than the “simple” 30-day collection (covering the period of February-March, 2017) of diary strips it appears to be on the surface : it’s an examination not only of an emotionally turbulent period in the life of a 25-year-old New Yorker, but of how the process of putting these experiences down on paper allows its author/subject to regain control over the narrative of her own life — at precisely the moment when the parameters of said life seem entirely out of her control.

If you’re gonna “play” the autobio “game” successfully, sharp observational skills are indispensable, and Lannes certainly has hers honed to the point of glinting — she’s painfully frank in her depiction of others’ foibles, sure, but crucially she doesn’t spare herself, either, as the darkly humorous title of this spiral-bound collection (printed and bound with the level of exacting care we’ve come to expect from Perfectly Acceptable Press) makes plain from the outset. And yet, while you could be forgiven for making the assumption that self-pity is the main course on offer here, in truth it’s barely even on the menu. 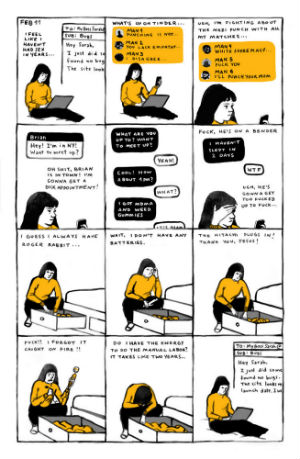 To my mind, at any rate, that — in addition to just plain smart cartooning choices — is what gives Lannes’ work a “leg up” on most memoirists. Is everything in this book told from her own point of view? Absolutely. But that point of view isn’t afraid to lay its own process of becoming absolutely bare in front of readers. As Lannes navigates the perpetually-confused (and, from where this old married guy is sitting, perpetually confusing) landscape of Tinder dating, as she briefly re-connects (unsuccessfully) with an old flame, as she runs away from New York (to Mardi Gras, no less) with a guy who’s every bit as “on the rebound” as she is, as she dabbles her toes tentatively into involvement with local democratic socialist groups, as she falls for a guy named Francesco alarmingly quickly (and she knows it) only to ultimately add him to her mental list of guys who have let her down (he demands exclusivity from her while not being willing to return the “favor” — asshole), as she drifts from one doomed freelance gig to another — her honest thoughts and reflections are front, center, and immediate, but so is the internal debate within herself about how she’s going to present all this, to memorialize it, not only to herself, but to a readership composed largely of more or less complete strangers.

Following her quasi-breakup with Francesco, Lannes’ life takes on the character of the sort of downward spiral we’ve all seen before and perhaps even lived through ourselves, and while there are times when it seems like she can’t catch a break no matter what — the batteries in her vibrator are even dead! — she never loses sight of how inherently ridiculous, perhaps even pathetic, the search for love, sex, and romance (and she’s acutely aware of how interconnected all three are) is, and she also never drifts too far from her inherently (is it too soon to call it “trademark”?) self-deprecating wit. Is this all life and death stuff? It certainly seems to at the time to Lannes (as it would to most of us), but hey — that doesn’t mean you can’t see the funny side of it all, even while it’s still happening. 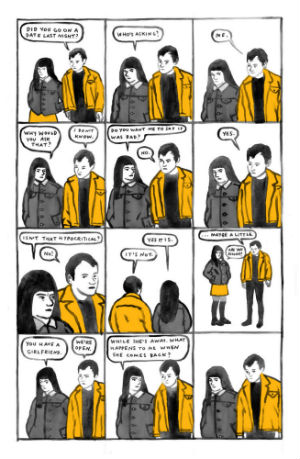 By the time all is said and done, Lannes’ down-to-Earth-and-maybe-even-beneath-it editorial POV becomes downright necessary, as she’s forced to open up the lines of communication with Francesco again to let him know that she may have, unbeknownst to her at the time, passed chlamydia on to him. There’s no “easy” way to delineate a scene like this, but Lannes at least manages to make it bearable to read, even if living through it was obviously anything but. You’ll cringe, but you won’t be able to stop reading — and you’ll find yourself bummed out that it’s all over when you get to the 30th, and final, page. Even if you’re somewhat relieved.

Names are changed to protect the “innocent” here, as you’d no doubt expect/hope for — hell, one of the characters is even (appropriately) given a dog’s head — but I’d still put By Monday I’ll Be Floating In The Hudson With The Other Garbage right up there with the most unflinchingly honest memoirs the comics medium has ever (no exaggeration) produced. It’s uncomfortable, it’s harrowing, it reads very much like a work produced from a place of compulsive need — and it’s hilarious. The overall experience of reading it can leave you feeling exhausted, at least mentally and emotionally (hell, maybe even physically, depending on what kind of shape you’re in), but you’ll walk away from it feeling damn impressed indeed. Maybe even something akin to floored.

Besides, what more do you need from a comic than sex, socialism, and self-reflection? 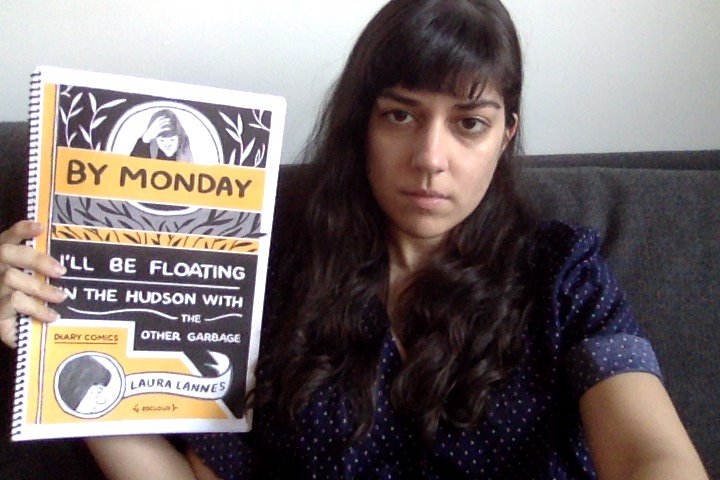 Okay, admittedly $25.00 is a lot to pay for anything, much less a comic book, but By Monday I’ll Be Floating In The Hudson With The Other Garbage is an unforgettable read, and is sumptuously-produced, to boot. It can — and should — be ordered directly from the cartoonist at https://lauralannes.bigcartel.com/product/by-monday