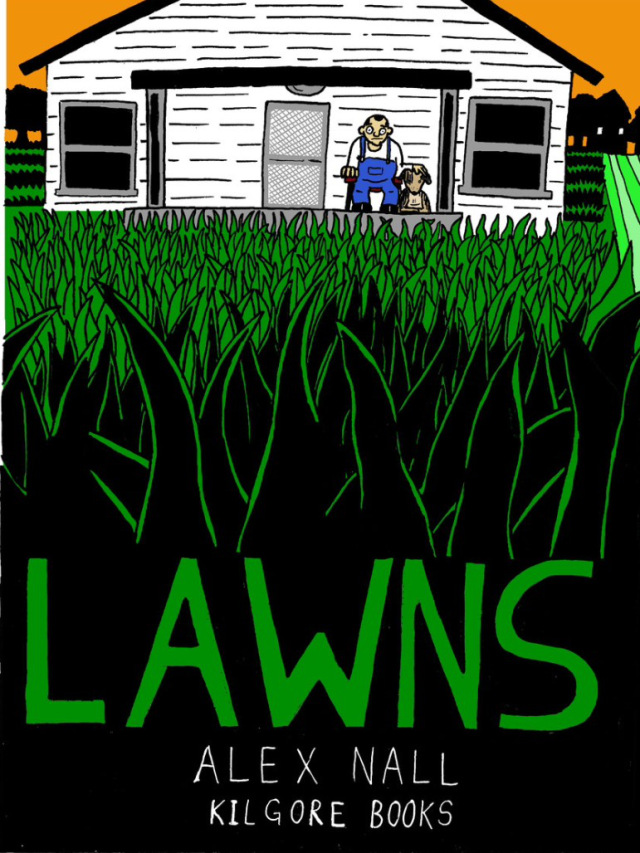 “In a town like Twin Peaks,” the promotional advertisements for David Lynch’s TWIN PEAKS: FIRE WALK WITH ME informed us, “no one is innocent.”

Of course, when his foolishly-lambasted masterpiece (for my money, at any rate) hit theaters back in 1992, Lynch had already made something of a career out of exposing the dark underbelly of the American myth — whether he was shining an uncomfortable light on the shadows cast by the apple pie exterior of small-town life in BLUE VELVET, or exploring the corrosive pressure applied by pop culture iconography on the socially-and-economically-marginalized in WILD AT HEART, he had staked out a viewpoint (to say nothing of a distinctly surreal style) all his own by the time he finally guided us through Laura Palmer’s harrowing final days.

Cartoonist Alex Nall, by contrast — who mines certain similar thematic veins in his latest Kilgore Books graphic novel, Lawns — has been busy plying his trade (and plying it very well, as anyone who’s read my glowing reviews of his two previous efforts, Teaching Comics Volume One and Let Some Word That Is Heard Be Yours — or, better yet, read the books themselves — already knows) in a wholly different environment up to now, either relaying his direct experiences as an arts educator, or filtering his exploration of the life and work of the great Fred Rogers through the lens said experiences have afforded him. He is, in other words, in very unfamiliar territory here — but you’d never know it. 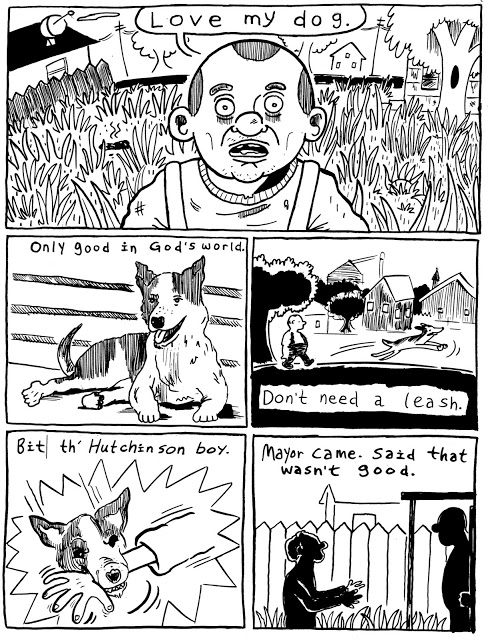 Ostensibly set in the mid-1990s for reasons that frankly escape me, Lawns is one of the more tight and concise ensemble-cast dramas you’ll ever read, nearly all principal players enjoying roughly equal “screen time” in this tale of how a contested mayor’s race rips off all the scabs a once-closely-knit community thought were healing up just fine. Most of the characters are “local eccentrics” of the sort TWIN PEAKS excelled at portraying, but Nall’s narrative is decidedly “non-Lynchian” in its structure, playing things pretty straightforward throughout, barring a couple of well-timed flashback sequences.

Likewise, his illustrations tend toward the economical and lithe, superbly conveying a generous amount of visual information with precisely the right amount of effort required. The book neither reads nor looks particularly “flashy” or stylized, but it’s done exactly right — Nall has hit on the exact approach necessary to do his characters, and their intersecting stories, justice. These are infinitely complex people, all hiding any number of secrets and past traumas, but who can somehow fit (though not always comfortably) into what appears, on the surface, to be a typically “folksy” tapestry of American life.

Until, of course, that tapestry begins to unfurl. 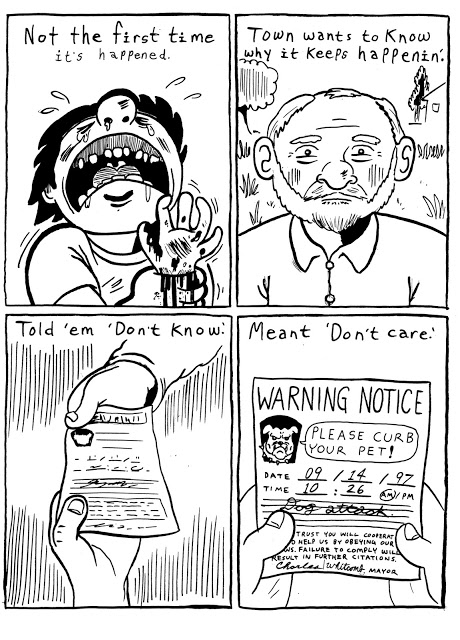 All things being equal, I should make it good and clear that Nall’s story could just as easily be happening today as 20 years ago, so timeless are the economic and social concerns that he touches upon, but from where I’m sitting it’s not providing a snapshot of either an uncomfortable past or present that is his primary goal here — rather, again like both BLUE VELVET and WILD AT HEART, this is about “everyday” people navigating through complex situations outside of their experience (and, in some cases, their pay grade), only to find something true and redemptive within their lives that is worth hanging onto and may even be enough to keep the darkness at bay. No one is exactly the same by the time their various “arcs” coalesce into something like a “conclusion,” but they’ve all found a place that will work for them, and that they have a greater appreciation for based on all they’ve been through. It takes a deft touch to pull all this off and not make it feel like a hammer bashing against your skull, of course, but Nall is nothing at this point if not an absolute master of the subtle, communicating more by means of one facial expression or slight quirk in movement than many of his peers are able to over protracted sequences of belabored panels. It takes a damn good cartoonist to make what he does look this easy — especially when you understand that it’s anything but. 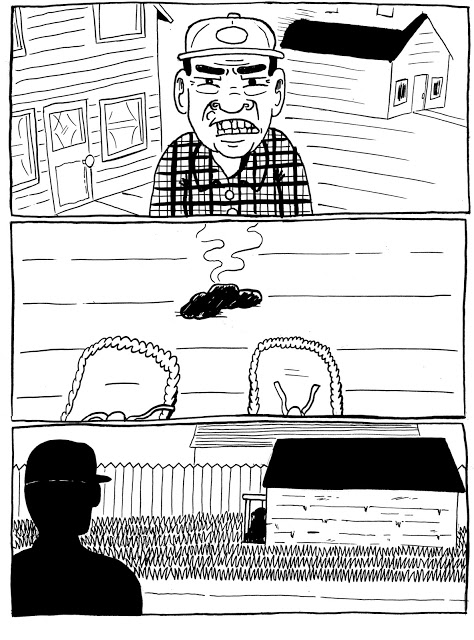 I dunno, at this point simply referring to Nall as a “talent to watch” seems like selling what he’s been able to achieve this quickly in his career far too short. He hit the ground running with a distinctly earnest vision of how he wanted to approach his work in his very first comic and has never looked back (or to his sides, or to — wherever), and with Lawns he translates that near-flawless methodology into an entirely new (for him, that is) realm of storytelling. It starts with an overgrown yard and a dog bite — it ends up being about, well, almost everything that matters. A supremely confident, fully-realized work that engages both heart and mind from its first page to its last.