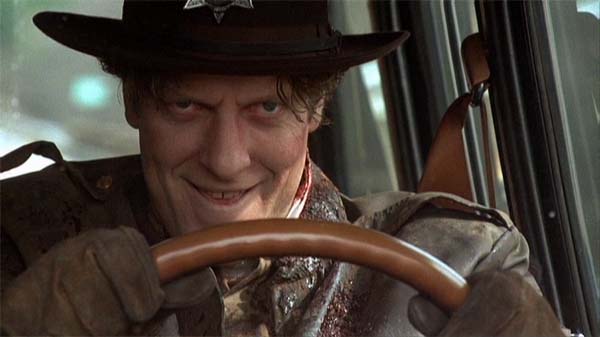 Remember those nights where you’d stay up during the witching hour to watch tawdry, terrifying films on the boob tube? You’d stuff your face with hot popcorn or cold pizza and down it with an even colder soda. You’d eagerly wait to see what sleazy wares Joe Bob Briggs would peddle outside of your parents’ eyesight. Or perhaps you were excited to see what fright flicks Gilbert Gottfried and Rhonda Shear would show on USA Up All Night. Did you always travel into the dank recesses of the horror section at your local VHS store on Friday nights and dare yourself to pick a film to scare you over the weekend? If you were that bloodthirsty maniac who never forgot your first love–trashy horror films, then you’re in the right place. Late Night Frights is a monthly column at Daily Grindhouse where Nathan Smith dives into the VHS archives to highlight horror films for all the lovely gore hounds that regard their mom and pop video stores with warm and fuzzy nostalgia. 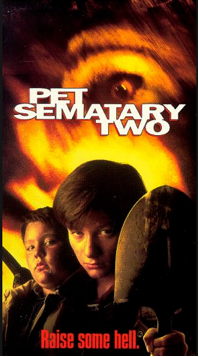 Death is an inescapable facet of our lives. We can run all we like, we can talk and fight all we like, but sooner or later, we’ll be consumed by an unending darkness. Similarly, we can never erase grief, but merely work through it. Though the pain of loss eventually dulls, but never strays, death in its infinite, unending hunger stains our brains with a greasy memorialized fingerprint that never ever disappears and serves to plunge us into the icy depths of depression at a moment’s notice. When we lose someone all we want is for them to be back in our lives, no matter the cost, because the comfort of companionship is better than the empty space in our life. How then, do we cope with death? How do we work to confront death?

Some folks use art to work through the admittedly complicated emotional machinations involved with one of the toughest topics we’ll ever know. Stephen King used the unthinkable near-death of his son Joe as the seed to write his ghoulish, homespun novel Pet Sematary–a zombie choked tale that beats with the black spirited heart of an EC Comic. It’s also the scariest novel he’s ever written (‘Salem’s Lot stands right by its side). I thought it was an evil book, a cursed book of unimaginable horrors. See, I made the mistake of reading Pet Sematary after my daughter was born and it popped that parental safety bubble in my mind. The world wasn’t soft anymore with my kid in it. It was harsh, cruel and unrelenting, and your loved ones could die anytime, regardless of age or inherent goodness. For King, it was an exorcism to pour the poison out of himself and into the pages he presented, which in turn gave us one of the cruelest, most unrelenting, downer films to hit major audiences. I remember watching this one on VHS on a Friday night and didn’t get what I expected! 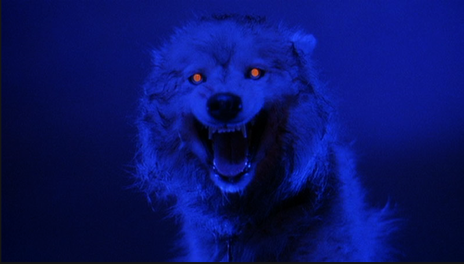 Whereas the novel and first film brilliantly serves as a meditation on the adult fear of losing a child and longing for them (the film actually highlights this element better–Gage’s death is one of the most devastating scenes of loss in a film), the 1992 grunge-tinged sequel PET SEMATARY TWO serves as the inverse of this loss as it deals with the loss of a parent–this time putting the weight of death and grief on the shoulders of a teenage boy (and by extension, his father), played with perfect adolescent moodiness by Edward Furlong, who was hot off the heels of TERMINATOR 2: JUDGMENT DAY before his unfortunate plunge into DTV purgatory. This transference from how an adult grieves with death to how a child comes to terms with death is especially weighty material, stitching that with the time where youth in a state of change, getting bullied and coming to terms give the film its full emotional resonance. In addition, I discovered Mary Lambert’s real reason for wanting to revisit the “semetary.” She notes:

“I really wanted to get into the idea of what goes on in a teenage boy’s head, on why they do stupid things. Because that’s the kind of stupid thing a teenage boy would do! Louis Creed buries his son because of an intense desire, a feeling of guilt that it’s his fault that the boy died, but Edward Furlong’s character buries Clancy Brown in Pet Sematary because he’s a teenage boy and he’s stupid! For teenage boys, the blood is not going to their brain; it’s going somewhere else.”

I also learned that she wanted to focus on Ellie Creed’s life for this sequel, but the heads at Paramount didn’t think a horror film toplined by a female would work, which is so goddamn dumb that I feel the need to fetch my fainting couch. Could you imagine the drama that would unspool from Ellie living with the demons in her shattered past? It’s a story rife with horror and pain. Also, girls like horror and seeing themselves represented, so their rationalization is truly baffling. Shrug, it was the ’90s. 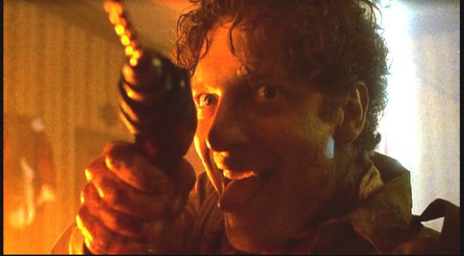 Mary Lambert’s hellishly underappreciated sequel picks up some time after the events of the first film, following Jeff Matthews (Furlong) as he relocates to the sleepy town of Ludlow, Maine with his father Chase (a pre-ER Anthony Edwards) after his mother dies in a freak accident on the set of a horror film. There he meets and befriends Drew (Jason McGuire), the stepson of the local asswipe sheriff Gus (Clancy Brown). After Gus murders Drew’s dog Zowie in cold blood (a tremendously fucked up moment), they bury the dog in the Micmac Burial Ground and away we go. The smartest thing the film does is to treat the legend of Louis Creed and his doomed family like a ghost story (there’s even a shot of the Creed house as Jeff zooms by on his bicycle). This is important material for a sequel to mine. Don’t attempt to replicate the original, but parcel nuggets throughout that gives a cohesive feel to the original–like how Renee (Darlanne Fluegel), Jeff’s mother, screams “DEAD IS BETTER!” 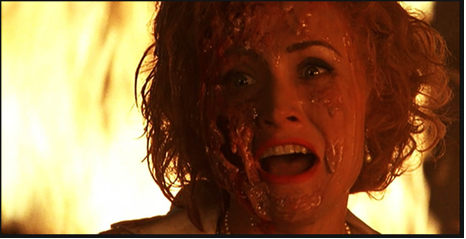 The first film’s capacity for cruelty is completely on display here from minute one with the death of Jeff’s mom, courtesy of a gnarly electrocution that gets grimmer when you add in the fact that the child is there for the whole ordeal. Going forward, we have animal killing (small kittens and a dog being cruelly shot), the murder of high schoolers, rape, and necrophilia. It’s nasty, mean-spirited stuff, folks. The one particular part that always felt mean was the zombie Gus tracking down Drew and his mother and chasing them down in his Jeep, culminating with them crashing into a truck. Then, he later drives over their headstones in the cemetery! All this after the heartless bastard killed his dog and sexually assaulted his mother!

All this being said, it’s not an entirely dour experience–-it’s actually quite the blast with over-the top gore that feels right at home with the gonzo ’80s films that came before it, especially the wacky and grotesque way Jeff’s bully Clyde is killed, a death that is actually similar to one in HAPPY BIRTHDAY TO ME. Once all the zombie shenanigans start up, there’s a steady pace and body count throughout (the vicious dispatch of Chase’s housekeeper is quite cutthroat), leading to a fiery climax involving Jeff’s dead mother, a moment that has similar shades to HELLO MARY LOU: PROM NIGHT II. The final battle between Chase and Gus is alternately absurd–Gus’ response to his zombie dog getting killed (“Well, I was building a doggy door!”)–and violent (Inappropriate drill usage!). Clancy Brown is clearly having a blast, relishing in the teeth-gnashing villainy of a law enforcement zombie. It feels a little like a pre-game for his hard-as-nails role as Byron Hadley in THE SHAWSHANK REDEMPTION.

The supremely surreal imagery doled throughout keeps audiences happy: Jeff’s mother’s face melting from the flames in the attic during the final scenes, the newly resurrected Zowie sitting perched in a rocking chair watching Jeff while he sleeps, or the aborted sex dream with Chase and his dead wife, which then morphs into a bizarre werewolf-lite nightmare. Fortunately, the ending is somewhat happier than the original, even with all the freaking death scattered throughout, and the film ends on an absolute blast of a song in The Ramones’ Poison Heart. 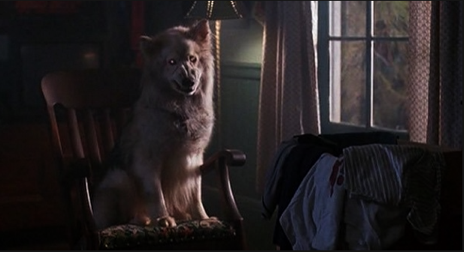 If the first PET SEMATARY was a perfect rendition of a feature length EC comics morality tale, then PET SEMATARY TWO is more like HBO’s Tales From the Crypt–a sloppy, emotionally mean horror tale. Louis’ tragic end becomes a campfire tale that the older kids tell the younger ones to scare the shit out of them. The first film becomes an urban legend, an apocryphal tale of a man driven to madness and the evil echoes he left behind. Most importantly, it’s a Halloween movie! Now, you’ve got no excuse not to watch this one when the witching season rolls around. I only wish there was a great special edition Blu-ray, which is something the first one was at least given. Gather your friends and watch a nasty zombie movie. You’ll have a good one!