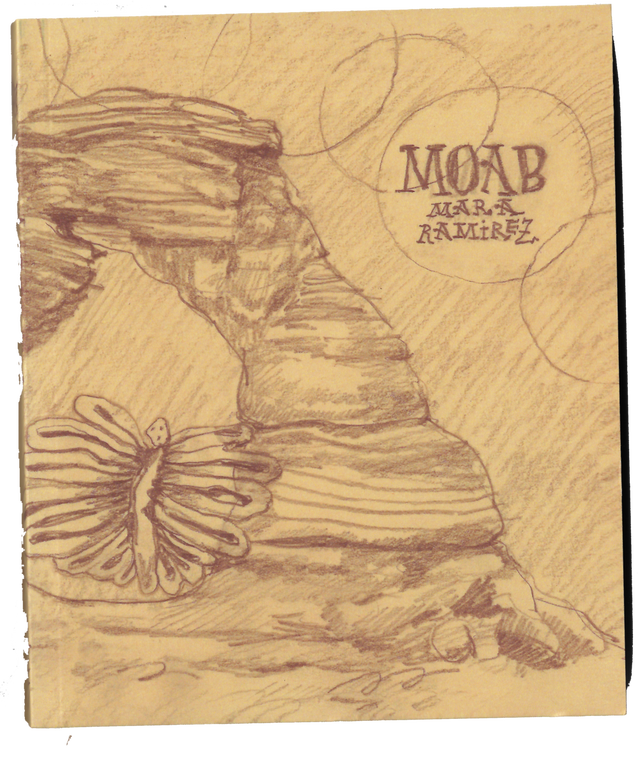 There’s truth in packaging, and then there’s this: Oakland-based cartoonist Mara Ramirez’s recently-released debut graphic novel, MOAB — which comes our way courtesy of Freak Comics — is formatted to look like a sketchbook/diary with a lush moleskine cover because, well, it is a sketchbook/diary with a lush moleskine cover, it’s just that it happens to tell one complete story. And one complete true story, at that.

I think, at any rate. Granted, there’s no indication that the narrative herein is strictly autobiographical — or even loosely autobiographical — but even if it isn’t, that doesn’t mean the story, and the emotive and expressive qualities that positively ooze from its metaphorical pores, is any less real. In fact, it only takes a few pages to clue readers in to the fact that this, right here, is as absolutely real as it gets. 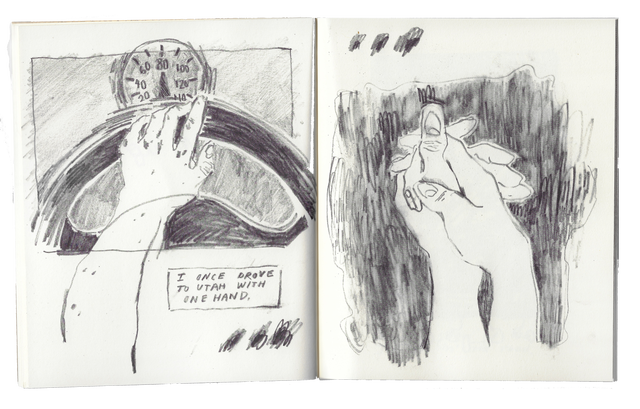 And no sooner do I say that than I immediately contradict myself, because if there’s one thing Ramirez excels at above all others, it’s imbuing her work with a distinctly ethereal and dreamlike character. Clocking in at well over 100 pages, this book proceeds at its own pace, which is to say that sometimes it may not even proceed at all. Stopping to smell the roses is one thing, but these undeniably immersive graphite sketches draw you in and invite you to take your time exploring not only the visual information they convey, but the mood and atmosphere they establish. On the one hand, sure, this is the story of a distinctly uncomfortable road trip out west undertaken by a couple whose relationship is deteriorating before our eyes, but on the other it’s about using the power of art to show the world this couple is moving through (and by that I should be absolutely clear and state that I mean both their external and internal worlds) as a landscape that’s both physical and emotional, with no hard and fast demarcation between the two. It’s an entirely unique reading experience that privileges perception over actuality, the experiential over the objective. It’s about what’s there and what’s happening, absolutely, but even more it’s about how all of that feels.

You want absorbing? This book is so absorbing that you won’t want to let it go — hell, you may even need to devise a strategy for leaving it behind. But you won’t be in any hurry to do so, that’s for sure — “from my cold, dead hands” ain’t just for guns anymore, my friends. Not that this is, in either concept or execution, an “easy” comic to spend time with — the emotions it explores and extrapolates upon are as raw and utterly unmediated as it gets. But they’re so immediate, so intricate, so fragile, and so altogether real that you could be forgiven for feeling like this is all happening to you rather than to a pair of fictitious characters. Probably because, hey, if you’ve ever been in relationship that’s gone through a “rough patch” — one where it’s been unclear whether you were going to make it as a couple or not — then you have, indeed, lived this story. You probably just never figured that everything that was going on in your head at that time could come flooding back to you by means of a primarily visual narrative. I know such a think never occurred to me, that’s for sure, and yet — here we are, and Ramirez has unquestionably managed to achieve precisely that outcome. 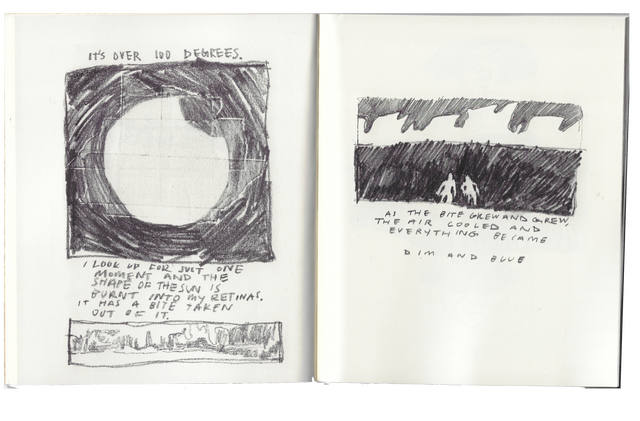 Not that precision figures into the equation all that much on a purely conceptual level here — nah, that would be too easy and too calculated in equal measure. This is free-form, improvisational comics at their very best, with shapes and figures and moods and emotions morphing “on the fly,” so to speak, with little regard for anything other than emerging into whatever they are entirely on their own terms. Dreams work that way, absolutely, but I’ll let you in on a little secret: When life is working like it should, be it good or bad — when you’re experiencing periods of profound import and meaning, when everything is charged with fabulous and painful significance — well, that’s when reality itself has an inherently “dreamy” quality to it, as well. Capturing that feeling of everything being too real to possibly be real at all is what this book is all about, and does it ever deliver on that score. 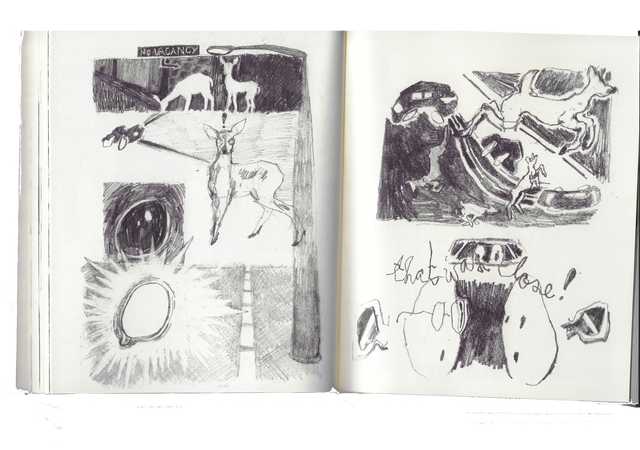 Look, I know it’s only July and there are many months — and many comics — to go before we usher 2020 out the door, but I’m just gonna call it right now: I’d be very surprised if this wasn’t sitting atop my “best of the year” list when all is said and done.

MOAB is available for $25.00 from Austin English’s Domino Books distro at http://dominobooks.org/moab.html