In a crucial scene during the first act, Meryl Streep’s Madeline Ashton saunters out of her mansion shared with her husband, Ernest (Bruce Willis), whom she stole from Helen Sharp (Goldie Hawn), to meet up with a young stud for a routine tryst, only to see that the man with whom she’s been cheating has also been cheating… on her. After she confronts him, he tells her, “You should find someone your own age, Madeline.” Cue thunder, the sky opening up, and torrential rain pouring down all over her, the kind of poetic timing that only exists in film. Within the span of just a couple minutes, we discover so much about the type of woman Madeline Ashton is: vicious — in that she blatantly packs an overnight bag and exits the house in front of her husband; a paradox — in that, though she’s willfully cheating on her husband, she becomes enraged that someone would dare do the same to her; and finally, deeply sad, afraid, and alone—in that the only worth she could ever measure was her beauty, and now without it, she feels completely useless.

Beneath the EC Comic vibes of horrific violence and very black humor, there is a pretty potent discussion about the blood thirst between women vying for what they think they deserve, as well as the cog-machine-like machinations of Hollywood, which uses up actresses like Madeleine Ashton and deposits them once they have out-aged their purpose. It’s the kind of conversation that’s being had right now, but one that director Robert Zemeckis and screenwriters David Koepp and Martin Donovan wanted to have nearly 28 years ago. 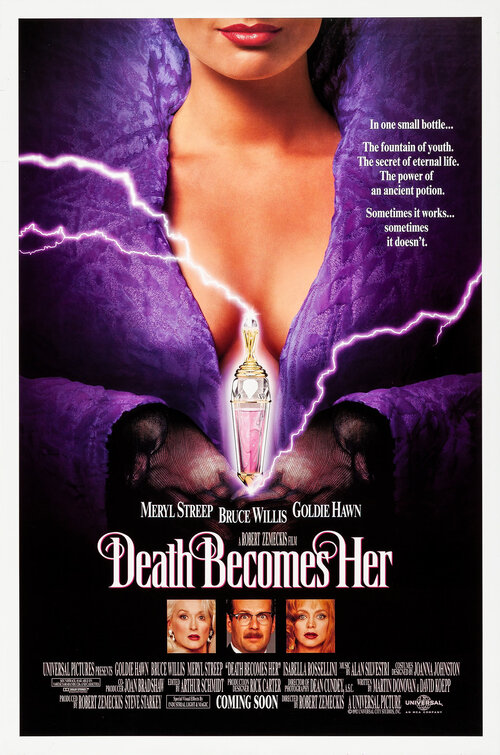 Even if we wipe away all the context on display and examine the film for what it is, DEATH BECOMES HER is simply a hell of a lot of fun. Seeing the ’90s-era versions of Streep, Hawn, and Willis take on such a goofy, gonzo approach and screaming to the rafters with their performances is what makes DEATH BECOMES HER so enticing. Streep, especially, who is likely the most esteemed actress still working today, is having a ball playing not just a bitch (which she’ll do again famously in THE DEVIL WEARS PRADA and THE IRON LADY), but an undead bitch. With DEATH BECOMES HER being Streep’s sole contribution to the horror genre (she admitted during a Wes Craven retrospective that, prior to working with him on MUSIC OF THE HEART, she opted not to watch any of his prior films because she didn’t have the stomach for it), she lets it all hang out and leaves it all on the field. Likely the chance to skewer Hollywood and its ageist approach is what led her to sign on to the film in the first place, but it’s clearly evident that she’s totally down with the more gruesome aspects of the story. Seeing someone so high-brow bring her usual level of Streepness to something that might appear as if she’s “slumming it” is one of the best aspects on display. 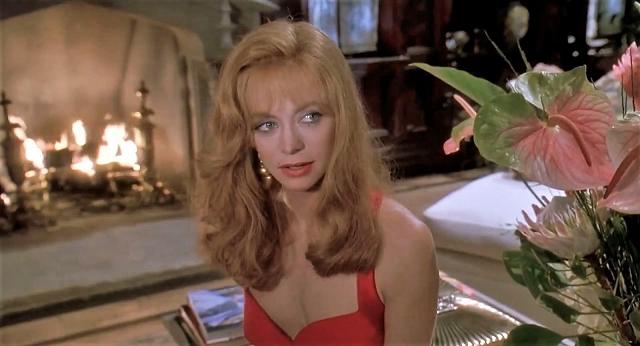 And not to leave Goldie Hawn out of the lovefest, who matches her co-star pound for pound, but can we all just sit back and enjoy Bruce Willis giving one of the best performances of his career? The man who nowadays famously sleepwalks through one direct-to-video action film after another is almost operatic as Ernest Menville. He’s a shrieking, boozing, wide-eyed, scheming drunk, and it is so so so much fun to watch. He’s never offered as much energy and actual performance, ever — not even during his five-time run as John McClane — and it’s a shame we’ll probably never see it again. 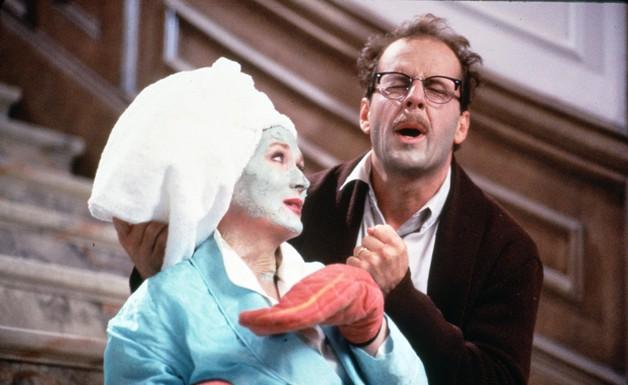 Rumors abound that DEATH BECOMES HER was intended to be the launch of the Tales from the Crypt film brand, and being that the picture was released by the eventual distributor of DEMON KNIGHT and BORDELLO OF BLOOD, as well as directed by Tales from the Crypt director and executive producer Robert Zemeckis, it’s an easily believable one. It certainly has the make and model of the EC Comic aesthetic down: brutal violence, murderous schemes, ironic twists, sexytime, and gallows humor.

And also: the outrageous special effects.

Zemeckis has always been a filmmaker, though talented, accused of letting his interest in special effects drive the narrative, instead of the other way around (which purists will tell you is the proper hierarchy). DEATH BECOMES HER is no different, and though it’s the visual effects that take precedence, the physical ones are equally impressive. Hawn’s temporary transformation into a bloated, overweight, cat-hoarding shut-in, for one, is still impressive even ten Eddie Murphys later. But it should come as no surprise that some of the visual effects, though not all, haven’t aged well, which has been one of Zemeckis’ shortcomings as a director. In the same way I’m sure the effects for BACK TO THE FUTURE looked tremendous in 1985, and CONTACT looked tremendous in 1997, the effects in DEATH BECOMES HER are coming up on twenty-five years old, and they wear their age appropriately. 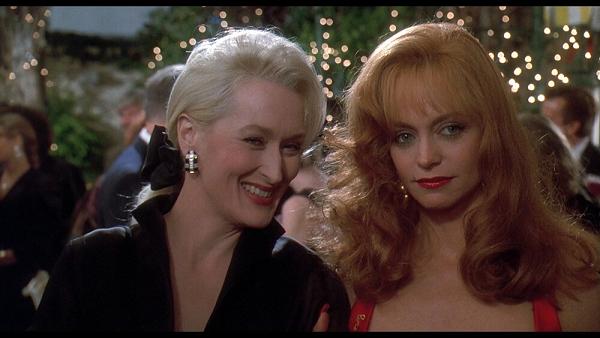 Shortcomings aside, DEATH BECOMES HER is just fun, and feels like one of those films they don’t make anymore. With all this talk in Hollywood of unbalanced opportunities between men and women, and especially with the ageist issue that seems to dog some of our older actresses, DEATH BECOMES HER is actually more relevant now than it was back in 1992, and it’s a delight to see its wicked cast take part in something so loony and dark. It’s hilarious in all the right places, and equally gruesome in others. Watching the likes of Meryl Streep and Goldie Hawn — two legendary and respected actresses — do battle with shovels, with one’s head being smashed down inside her neck while the other has a broken handle speared through the giant hole in her stomach — feels like a novelty, but not the extraneous and ultimately forgettable kind. Despite all the goofball charm and somewhat limited appeal (mothers weren’t quite prepared for this Meryl Streep film), DEATH BECOMES HER feels like it’s not just from a bygone era, but feels like a miracle that it was ever made at all. This type of concept is still made today, only they star actors who make a living in churning out straight-to-video rubbish, but that this time it involved the likes of Streep, Hawn, Willis, Koepp, and Zemeckis is what continues to make it such an event. Its appeal — much like Madeline and Helen — will never die.