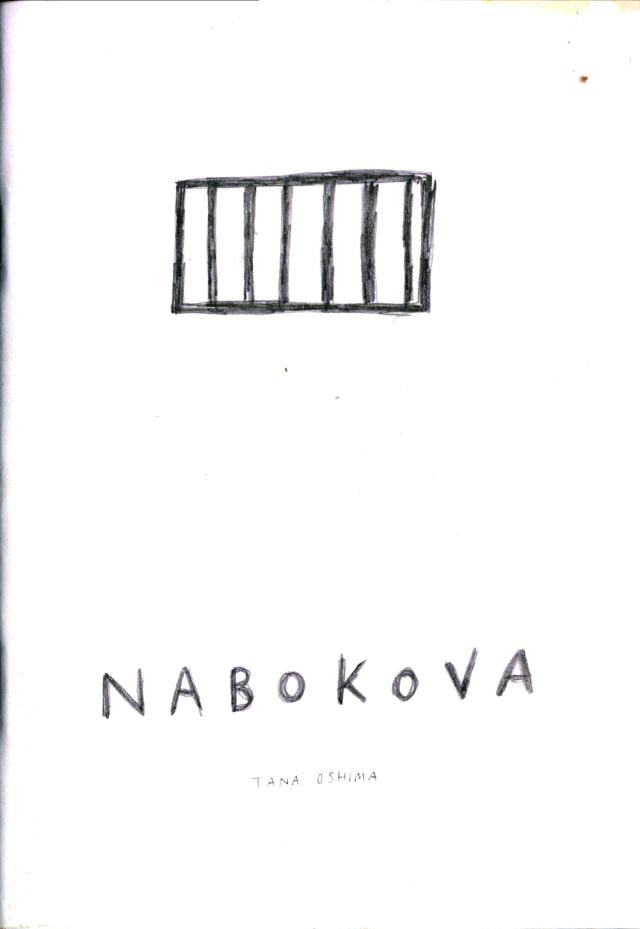 There’s beauty in simplicity, as the cover of Tana Oshima‘s newest self-published mini, Nabokova, clearly demonstrates. It’s stark, perhaps even spartan, but deeply communicative and precisely thought through. It imparts its message with crystal clarity and nothing by way of fuss or muss.

But there’s beauty in complexity, too, and this comic is also proof positive of that, as we’ll get to shortly. And trust me — this really only scratches the surface of the contradictions and conundrums contained herein. Bring your hardhat, folks — this one takes some real work. 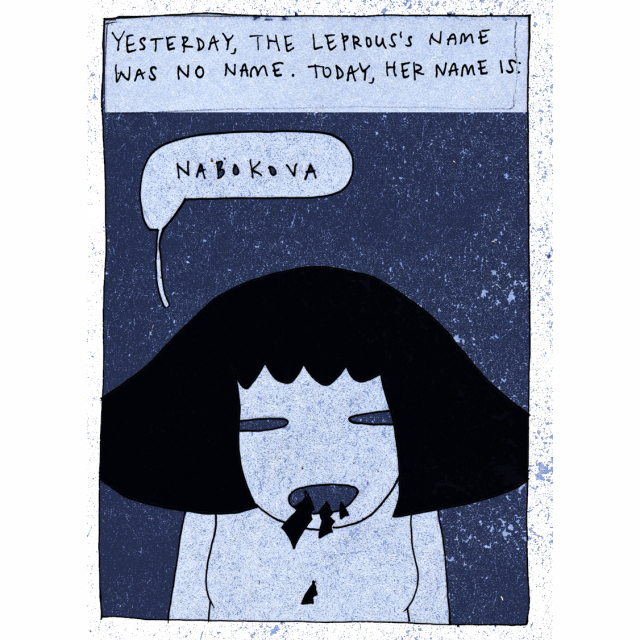 On a purely physical level, this is a book that exemplifies the kind of quality artistry and craftsmanship we’ve come to expect from Oshima in fairly short order — printed in rich colors and varying tones and gradations (blue being dominant in all things — okay, almost all things) on high-quality paper between heavy cardstock covers and exquisitely drawn, it’s an object you’ll enjoy holding in your hands as much as looking at, but please do take note: It’s a whole heck of a lot heavier than it looks and feels.

Obviously, Russian literature has been a source of inspiration for Oshima throughout her brief-but-frankly-brilliant cartooning career, but here its influence is felt in everything from the self-chosen name of our ostensible “heroine” ( a term I use, I assure you, very loosely) to the richly oblique (again with the contradictions) symbolism of the world it takes place in to the internalized struggles that make up the narrative and thematic backbone of the strips themselves. And as far as those strips go — 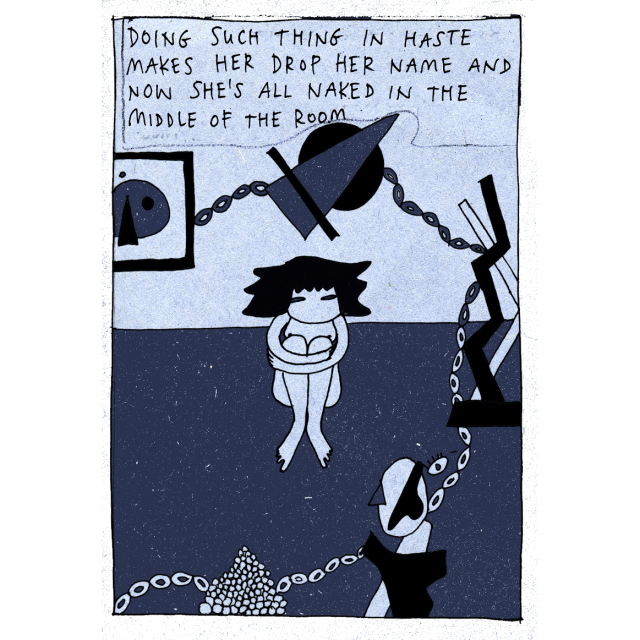 The connections between them are in no way hidden, but neither are they spelled out plainly. I said bring a hardhat — you might want to pack a lunch, too. Oshima mines every panel for more conceptual density than you’d think her frequently-austere imagery would provide for, but the deeper you dig, the deeper still you usually find yourself needing to go. Cliches like “lots to unpack” (or, hey, “pack a lunch”) don’t even begin to cut it here. Literary references, visual metaphors, and text that can be read and interpreted in any number of ways are all par for the course on these pages, and understanding of this book is both earned and absolutely unique to each reader. That may make it sound like a chore — which, fair enough, it is — but it’s an immensely rewarding and satisfying one, and Oshima pays you back commensurate with the amount of effort you put in. 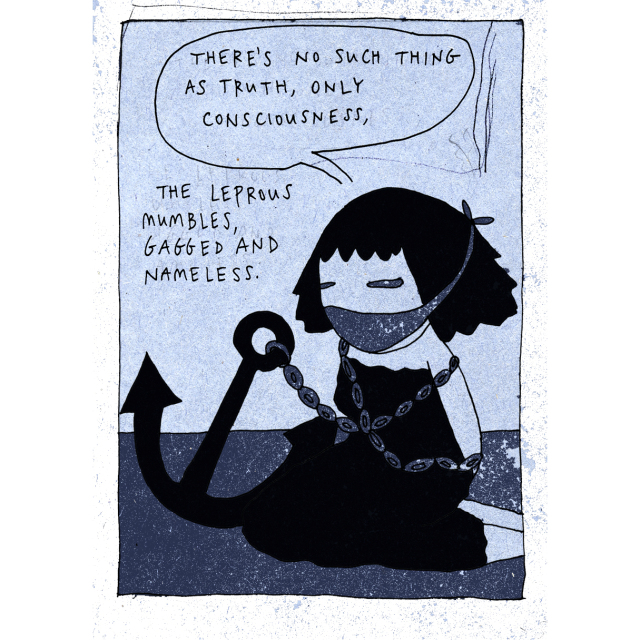 And that may actually represent the richest contradiction in a comic that’s packed to the seams with them (starting with a protagonist that’s in no way “likeable,” but almost undeniably lovable, and building out in all directions from there): At the end of the day, for all its depth, all its nuance, all its allegory and intimation, all its mystery,  the core philosophical conceit animating anything and everything contained within Nabokova‘s multitudes is a disarmingly simple one: Tthe more you give, the more you get back in return. To say anything more would be to say too much — get this comic now and get to work.

Nabokova is available for $8.00 from Austin English’s Domino Books distro at http://dominobooks.org/nabakova.html 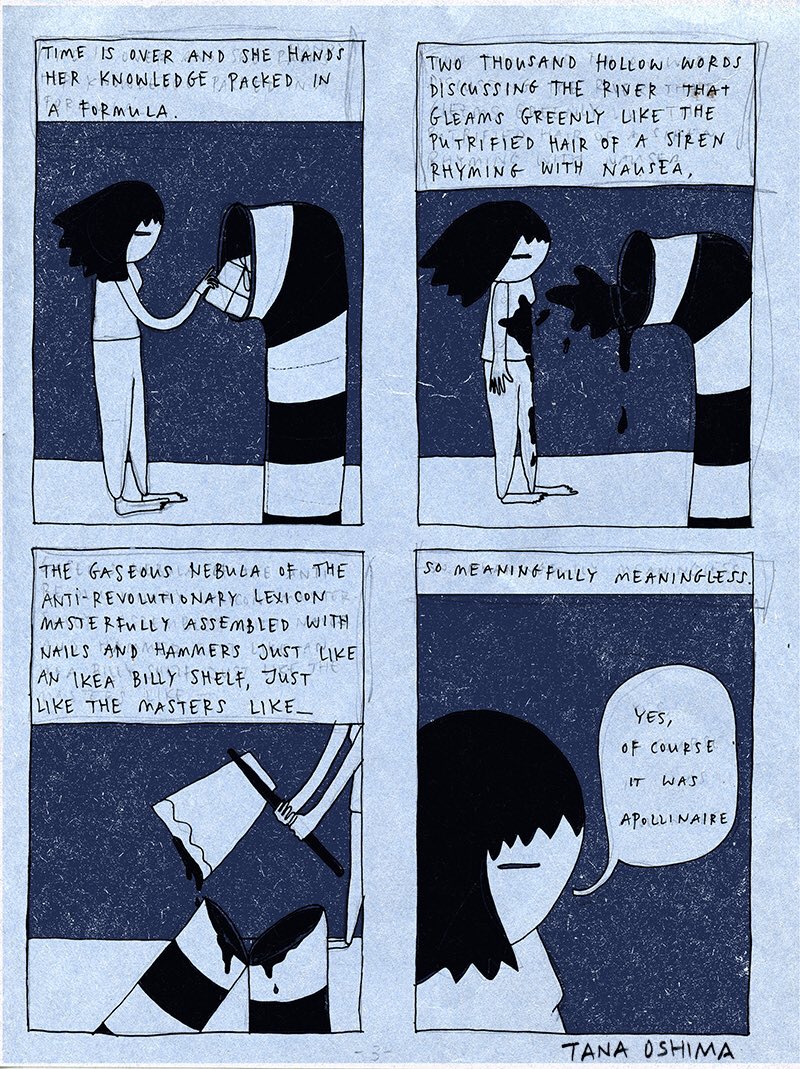