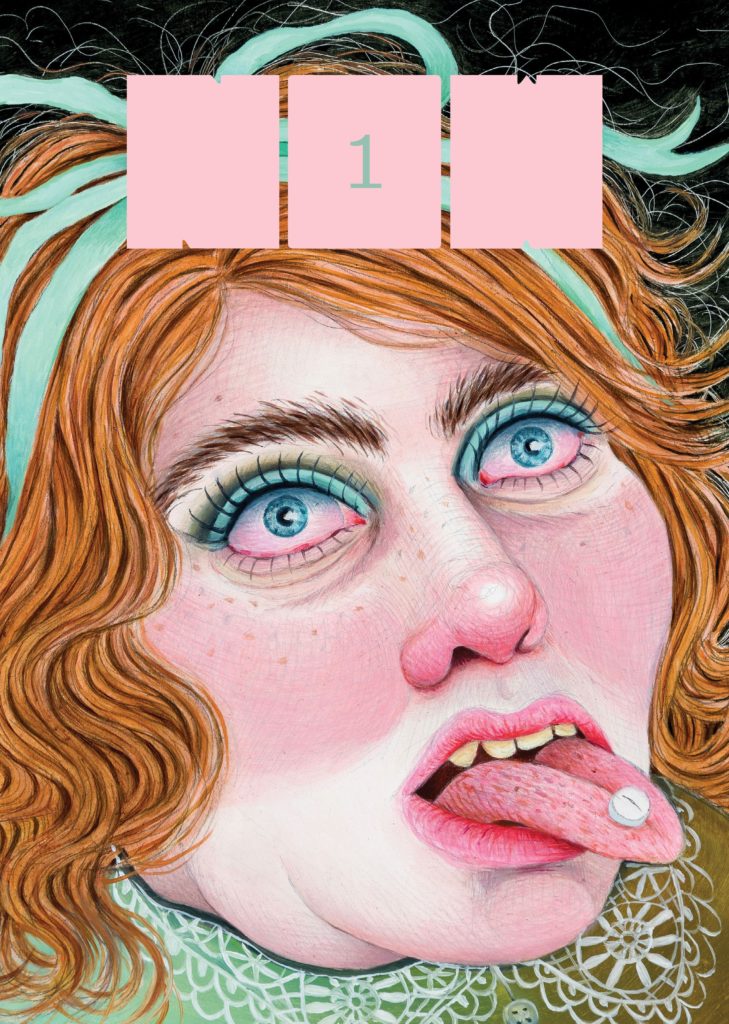 As any long-time reader of purportedly “alternative” and/or “indie” comics can tell you, one of the defining traits of the medium in every decade is a kind of “state of the art form” manifesto that’s not so much written as it is mapped out by the varying-to-disparate editorial sensibilities of, and even a kind of de facto creative tension that arises between, two contrasting and contemporary anthologies. As that same long-time reader (in this case, me) can tell you, though, the one-time gulf that separated said pair of anthos (whatever they may be) has been narrowing over time — first to a gap, then to a short hop, and now, perhaps, to something that looks very much like a convergence.

In the 1980s, for instance, despite the occasional cartoonist who could safely appear in both, the “high art” ethos (or, if you’re so inclined, pretensions) of Raw were pretty far removed from the punk-infused, DIY, “low-brow” populism of Weirdo, which not only wasn’t afraid to play around in the gutter, but seemed downright at home there — but as their respective spots were assumed by Drawn And Quarterly and Zero Zero in the ’90s, the goal posts of each shifted closer to the other. Closer still were Kramers Ergot and MOME in the so-called “aughts.” But ever since MOME closed up shop in 2011, Kramers has pretty much had the entire playing field to itself.

Not that other anthologies haven’t turned up here and there, mind you — many of them quite good. But these tended to be one-off affairs, often constructed around an editorially-dictated central theme or conceit, rather than, to invoke a sickeningly over-used term, curated publications whose nominal-to-the-point-of-being-oblique themes have to be teased out by readers by dint of the “running order” of strip presentation, a la Kramers — that is, until now. More specifically, until Now. 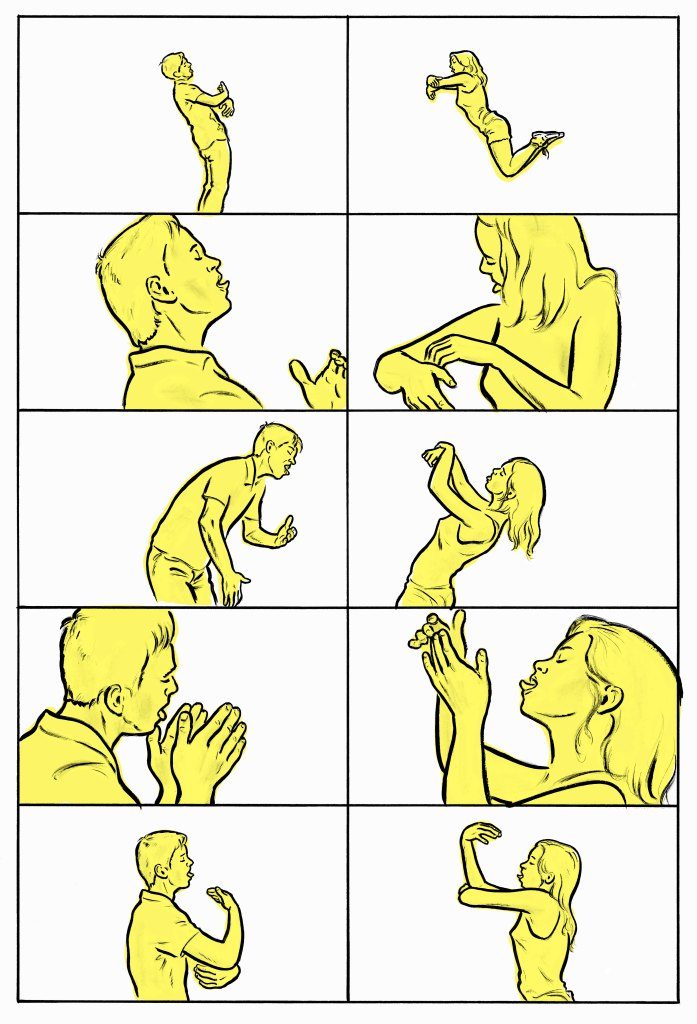 Former MOME editor Eric Reynolds has decided to “get back in the game,” so to speak, with a new thrice-yearly anthology that even comes complete with a (poorly-worded, but whatever) “mission statement” of sorts. To quote directly from Reynolds’ introduction: “I want to leverage Fantagraphics’ stature in the marketplace to put out an affordable and ongoing print anthology that showcases as broad a range of quality comic art as possible — and to put it under as many eyes as possible. I want to make an anthology that looks inviting to a casual comics reader but challenges them as they dig deeper. I want to encourage a revival of the short story in the age of long form graphic novels. I want to showcase as diverse a collection of cartoonists and comics as possible, one that provides a full spectrum of what the medium has to offer” — all noble goals, surely, even if the first and the last are, ya know, basically the same thing. Methinks the editor may need — an editor?

Pedantic bullshit aside, though, who am I to argue with Reynolds’ logic? And his opening night gala has a heck of a guest list: Rebecca Morgan provides the eye-catching (to say the least) cover, with a three-panel back cover strip by Nick Thorburn; Sara Corbett, Gabrielle Bell, and Kramers‘ own Sammy Harkham contribute one-page strips (all quite strong); Tobias Schalken, Dash Shaw, Tommi Parrish, Kaela Graham, Daria Tessler, Conxita Hererro, and the team of cartoonist Malachi Ward and co-author Matt Sheean chime in with medium-length strips; and Eleanor Davis, J.C. Menu, Noah Van Sciver, and Antoine Cosse serve up what we’ll call, for lack of a better term (that I can think of at the moment, at any rate) “feature-length” strips. A nice mix of veteran and emerging talent, indeed. 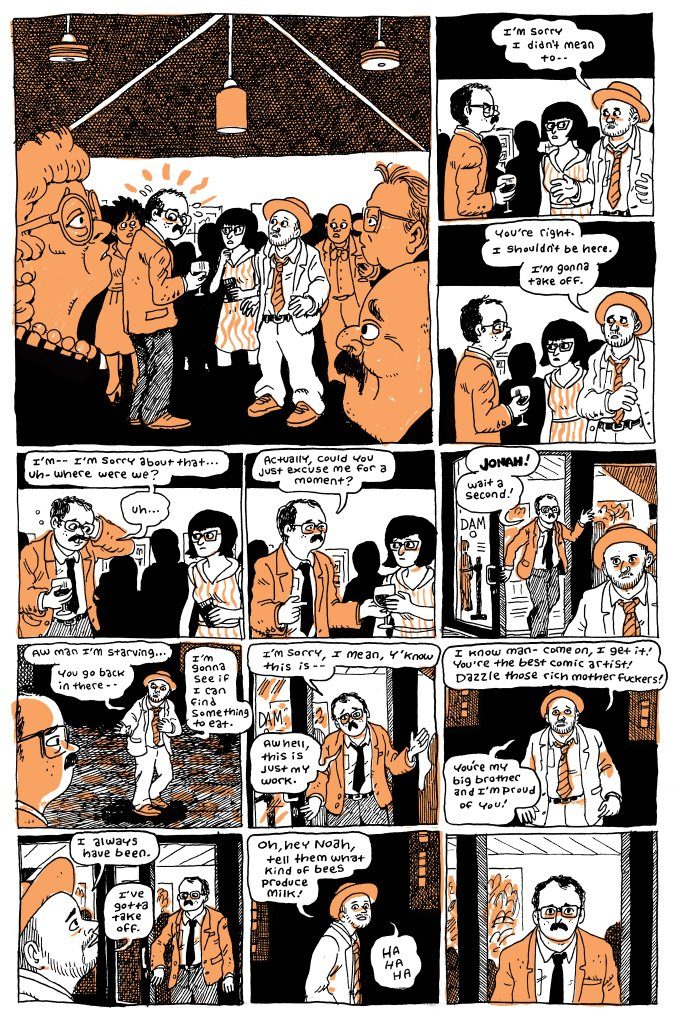 If pressed to pick one “standout work,” I’d probably have to go with Davis’ “Hurt Or Fuck,” a deceptively-simple interpretive piece that expertly uses the gaps in its own internal logic to heighten its emotional resonance and that, in true Davis fashion, doesn’t pack a punch so much as it leaves an invisible mark with a bittersweet (but mostly bitter) sting that lingers for days, but Van Sciver’s “Wall Of Shame” is a superb and eminently relatable autobio story not to be missed, Shaw’s “Scorpio” is an entirely unsubtle but nonetheless highly effective juxtaposition of a difficult childbirth with a just-as-difficult election night 2016 result (hey,a 128-page anthology can’t be expected to — fuck, in my view shouldn’t — avoid at least a little bit of Trump-bashing somewhere along the way), Graham’s “Pretend We’re Orphans” is a lavishly-illustrated “dark fairy tale” that effortlessly recalls memories of being scared in just the right way before bedtime, and Ward and Sheean’s “Widening Horizon” posits an alternate history — extrapolated from a handful of genuinely historical roads not taken — of international space travel that both forces and invites, in equal measure, one to consider Utopian alternatives to any number of societal ills if only, ya know, shit had worked out differently (as in better) in the past.  Any of these strips are worth the price of admission (something we’ll get to momentarily) alone, but to have them all between the same two covers is more than enough to cement Now #1’s place as one of the very best comics of the year.

Are there some misfires to be found here, though? Of course, but even there nobody fails for lack of trying: Hererro’s “Here I Am” is a re-contextualized version of an earlier Bell strip that’s gorgeously drawn, but fails to bring forth anything new from its “source material,” nor to add much by way of a distinctive personality it can call its own; Schalken’s wordless “21 Positions/The Final Frontier” misses its chance to coalesce at the last moment even though it’s right there for the taking (although maybe that’s the whole point and I’m just stupid); Cosse’s “Statue” tries to pack a bit too much “food for thought” into what is a sprawling, languidly-paced visual narrative; Menu’s “S.O.S. Suitcases” has enough going for it on its own merits that its author is just plain wasting his time by leaning on Lloyd Dangle and Gary Panter “influence crutches”; Tessler’s “Songs In The Key Of Grief” take us on an incredible post- “television age” psychedelic journey but fails to clue us in on why we should want to go along for the ride; Parrish’s untitled strip offers a fascinating and informative look at changing (indeed, evolving) gender identity mores and their cause-and-effect relationship with sexual orientation but is, alas, just a touch too earnest and “lecture hall”-ish for its own good. Not a “bad” offering in the lot, by any means, but all examples of strips that set out to do something they don’t quite manage to achieve. “Fascinating but flawed,” I think, is the exact phrase I’m looking for. 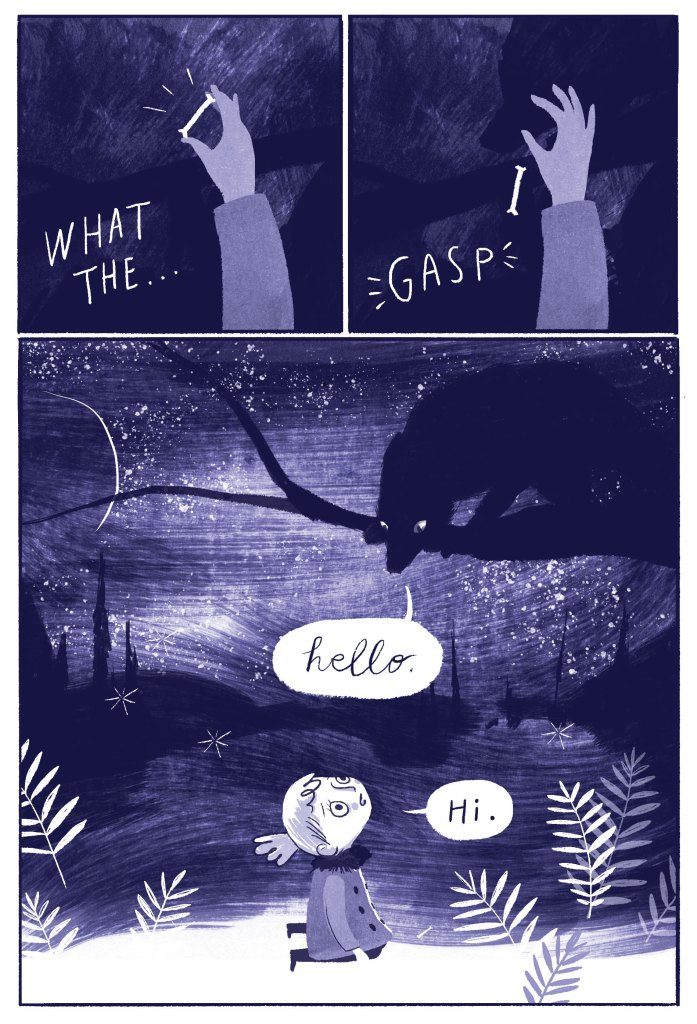 It’s in analyzing the whole, though, that things get really interesting : it’s clear that Reynolds has already succeeded, just one issue into things, in doing precisely what he wanted to with Now — there’s a lot of great material to be found here, a lot of “almost great” material, and no real “clunkers” in the bunch. Furthermore, it’s presented nicely (but not too nicely) and at a very reasonable price ($9.99 for 128 pages? Where are you gonna do better than that?) — and for a final flourish, it even manages to incorporate its economic populism into its overall aesthetic, its editorial being short and to the point, its table of contents being printed on the back cover, and its cover stock being of more or less the “standard comic book” variety. The paper’s slick but not anything you wouldn’t find in an Image or Dark Horse comic; its dimensions are no taller — and only slightly wider — than, say, a Marvel or DC “floppy” single issue; it’s squarebound, but just a simple glued binding — no doubt, this is “art comics” packaged for the mass market, and for mass consumption.

And that fact, more than anything, is what convinces me that the “dueling anthologies” paradigm is back — only this time they’re not even “dueling” at all. Honestly, any and all of the strips in Now #1 would feel every bit as “at home” in the next volume of Kramers Ergot. The same aesthetic impulses seem to be driving both publications, and besides, ever-emerging delivery platforms have blown open comics as widely as they have music and film by this point. The old divisions, already diminishing, are gone altogether now and quality work will, one way or another, find its way to an audience.  The only question is whether it will be via a computer screen, a reasonably-priced printed periodical, or a fancy, deluxe, over-sized book complete with numerous bells and whistles. There’s a place for all of it. There’s a market for all of it. Hell, for hungry readers and starving cartoonists alike, there’s definitely a need for all of it.

In that sense, then, what Reynolds and Fantagraphics (who, let’s not forget, also publishes Kramers these days) are doing here is filling in an essential gap, and serving an under-served segment of the comics community. Reading through this book made me realize just how much I’d missed having a top-quality anthology available on a consistent basis at a price that didn’t break the bank. I wish it had happened sooner, absolutely — but I’m glad it’s happening Now.