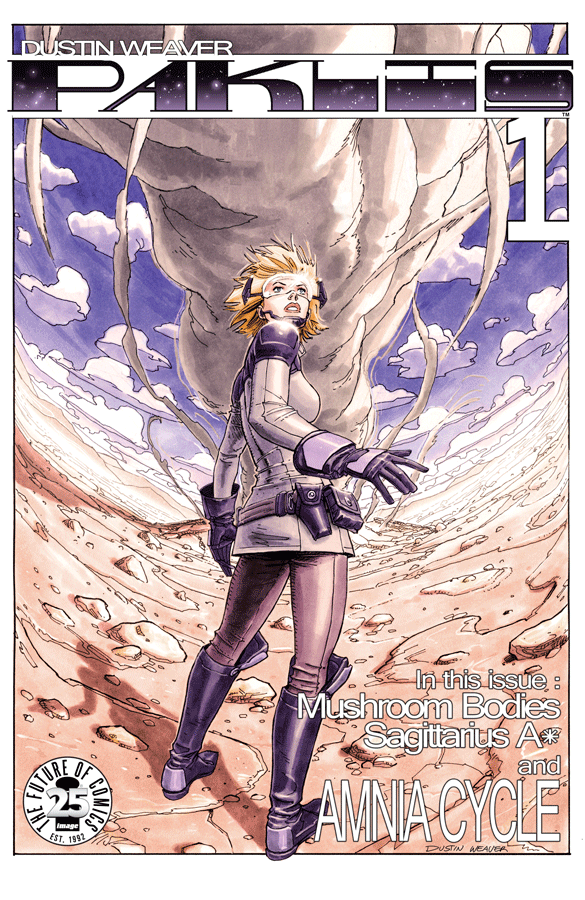 In recent weeks/months/years, I’ve bemoaned the lack of “single-creator anthologies” in the contemporary comic-book marketplace, and while I’m not suggesting that Dustin Weaver was actually listening to me — I’m sure he’s got better things to do with his time — I’m happy to see that he is, however inadvertently, determined to prove me wrong with the arrival of his new Image Comics series Paklis, a genre-centric showcase for his many talents that sees him wearing every conceivable “hat” a cartoonist can as he tackles the writing, art, coloring, lettering, and (to the extent any is even being done) editing on a rotating series of sci-fi and horror strips of varying lengths done in varying styles. At first glance the Moebius influence leaps right off the page at readers, but on subsequent pass-throughs, more subtle stylistic forebears — particularly Japanese masters Miyazaki and Otomo — make their presence known, as well, and the end result, while not always completely coherent, is a dizzying mix of artistic approaches that feels like an “international smorgasbord” of sorts and makes me damn happy I forked over my $5.99 for this 56-page introductory volume.

After a pleasingly clever introductory page that plays with meta-fictional conventions in a succinct and light-hearted manner, Weaver — who should bring over a healthy readership with him given his status as a “fan-favorite” artist for Marvel — drops us right in at the deep end with the dreamlike Cronenebergian insectoid body-horror of “Mushroom Bodies,” a stand-alone story that drips with nightmare menace and physically repulsive terror, and then follows that up with the first short installments of “Sagittarius A*,” a black-and-white drama set on a space station that reads very much like the short-form strips that 2000 A.D. readers have become accustomed to over the years, and finally treats us to the first chapter of “Amnia Cycle,” a long-form story about a female star-fighter pilot with a rebellious streak and, perhaps, a tenuous grip on reality. It’s a nice selection of stories that showcases Weaver flexing his artistic muscles in ways that his “Big Two” work never could. 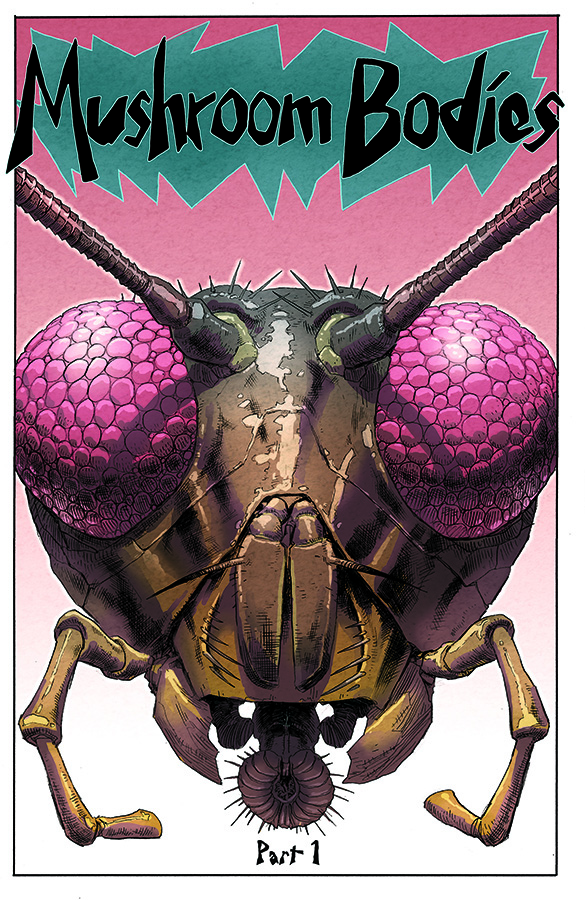 Of the three, “Mushroom Bodies” is certainly the strongest of the bunch — probably to be expected given that it’s apparently been gestating in his mind (as well as on his drawing board) for a number of years — but the other two features offer intriguing set-ups and do a terrific job establishing their characters quickly, so the best is more than likely yet to come from both of them. This is “art-first” storytelling all the way — something else in depressingly short supply these days — but the writing is strong and confident enough to know when to accentuate the visuals and when to just get the hell out of the way, so if you’re concerned that Weaver may have bitten off more than he can chew with this project, rest easy : he seems to know exactly what he’s doing. 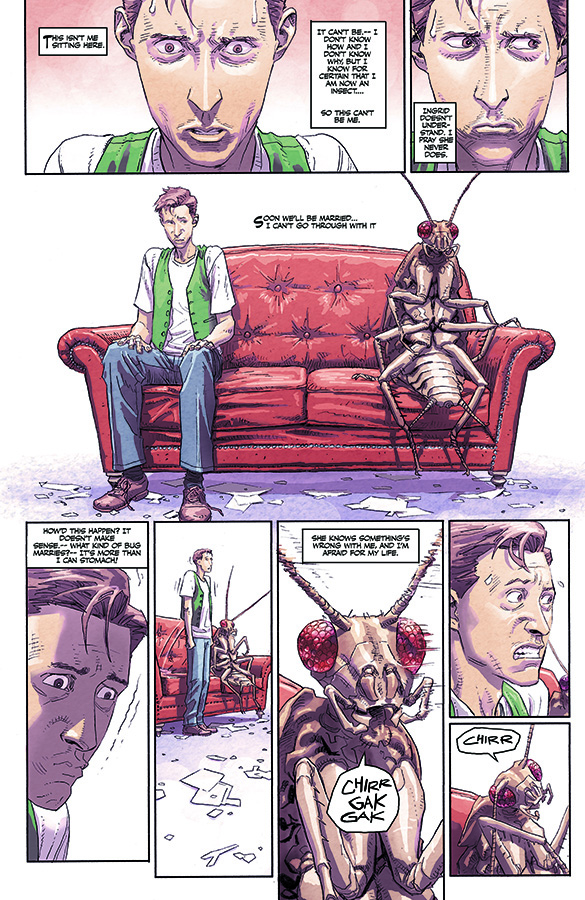 That being said, he still has areas where improvement would be welcome : the more limited color palette he employs with “Amnia Cycle,” while stylish, is nowhere near as effective as the wide range of hues on offer in “Mushroom Bodies,” the premise behind “Sagittarius A*” seems to be lifted more or less directly from Battlestar Galactica (not necessarily a bad thing, mind you, just a bit “been there, done that”), and all told a wider variety of subject matter might make for a more varied and interesting reading experience, but hey — it’s Weaver’s book, he can do with it what he wants. That’s the beauty of projects such as this, rare as they’ve become. 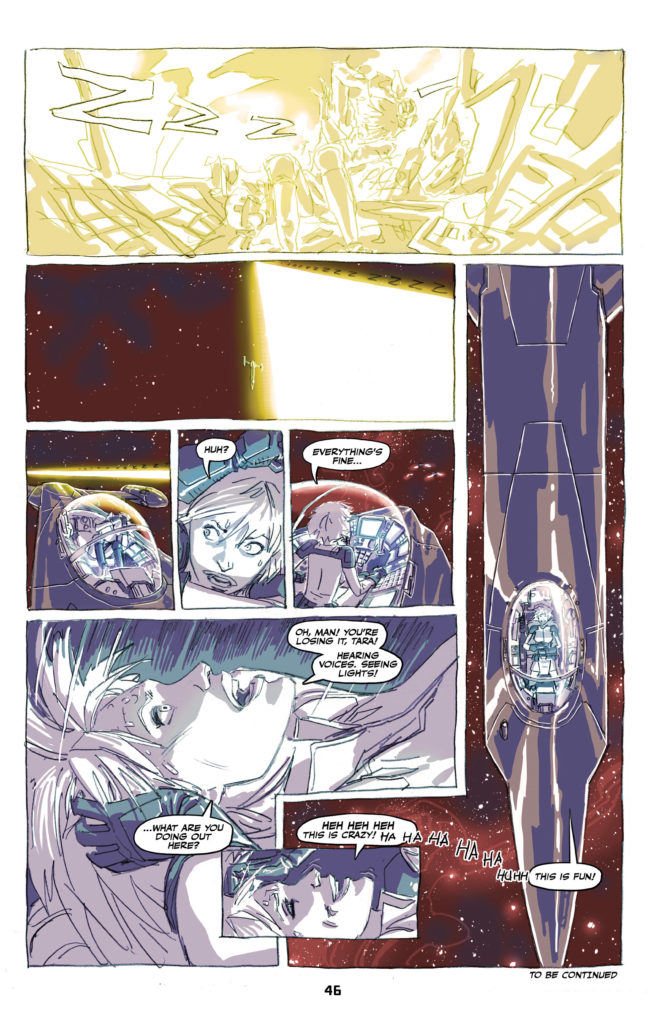 How long will it all last? That’s a good question, but as of right now Image has solicited four issues slated to appear over as many months, so hopefully sales will remain strong enough for Weaver to go beyond that point. “Amnia Cycle,” in particular, seems to have the potential to carry on for a good long while, and the inclusion of some more “one-and-done” strips would make for a nice balance with the ongoing narratives. Not knowing exactly what you’re going to get is part of the beauty of these types of comics, and so my earnest hope is that our de facto “emcee” will avail himself of the opportunity he’s got here to follow his muse wherever it takes him.

So, yeah, count me as being among those who are very excited to see what Paklis develops into — and hey, if we end up getting an explanation as to just what the title means somewhere along the way, that’s all the better. It’s your show, Dustin Weaver — make the most of it! 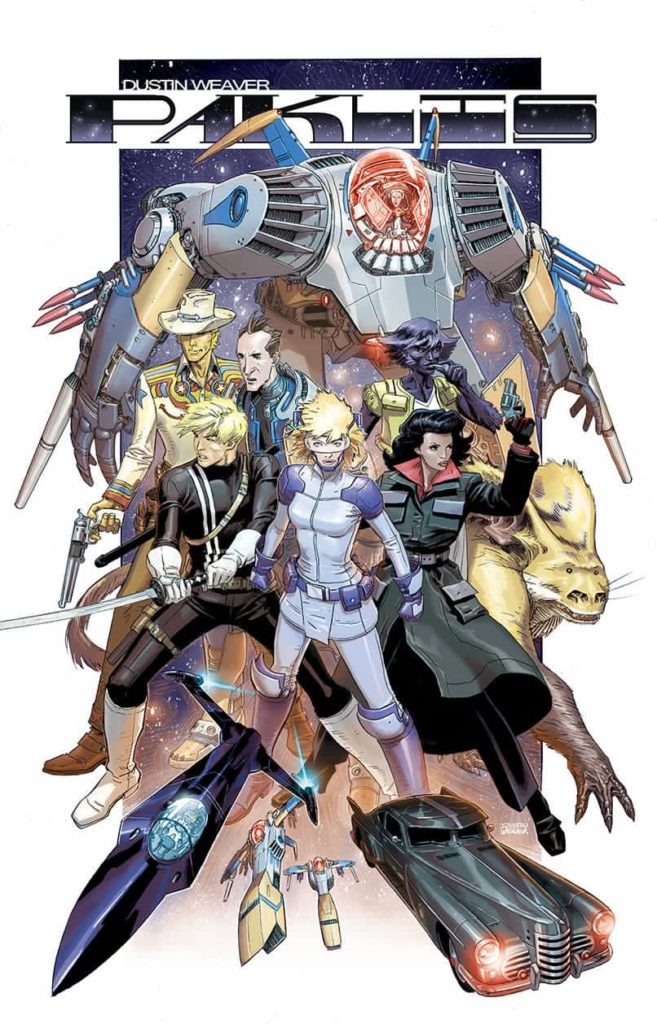