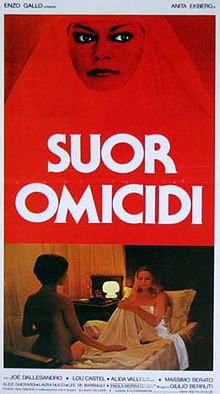 Nude dude on a slab

Candlestick to the skull

Needles to the face

Scalpel to the mouth 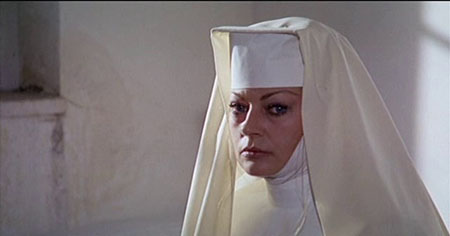 Nunsploitation is considered to be a lowbrow genre, even among its greatest fans. Of course it is; the central struggles in nun-a-riffic exploitation films are usually of a sexual nature, and the European filmmakers who cultivated the genre did not hold back on that sexuality. But in that dismissal of such depraved cinema lies a silver lining; there’s a certain creative freedom in telling stories that are written off by the more vanilla members of society, a freedom to sneak rebukes of institutions and social systems in among the bare breasts and the blood. Nunsploitation films in particular tend to criticize the oppressive nature of religion, specifically the Catholic Church, and its subjugation of the women that participate in the Church. Giulio Berruti’s KILLER NUN (1979) explores these themes with zeal, interweaves them with softcore porn elements, and earns a firm spot on the Video Nasties list as a result.

Sister Gertrude (Anita Ekberg) is recovering from surgery to remove a brain tumor, and she begins to worry that the recovery process is causing strange visions and headaches. These concerns are dismissed by her Mother Superior (Alida Valli) until marked changes occur in Sister Gertrude’s behavior. She begins to brutally mistreat her most vulnerable charges at the hospice center where she works, break her celibacy vows, and spirals into drug abuse and madness while a series of murders occur right under her roof. Who is responsible for the murders? Is Sister Gertrude really as sick as she believes?

KILLER NUN is something of an anomaly in the nunsploitation genre. It breaks the usual rules by placing the story in the present day instead of the Middle Ages, and moves the Sisterhood out of the convent and into a modern-day care center. By doing this, the resonance of its thematic subtext establishes itself. Now, as then, sexual and social repression has consequences on the psyche. Sister Gertrude’s surgery flips a switch that results in an eruption of lust for both flesh and blood. In a sense, films like KILLER NUN share a feminine kinship with the werewolf subgenre of horror in both their finger-wagging at the systemic and cultural denial of our primal urges, and their semi-empathetic look at the monsters of their respective films. Giulio Berruti and Alberto Tarallo walk a fine line in their screenplay, casting Sister Gertrude as both villain and victim. While she has a Nurse Ratched quality about her as she smashes an elderly patient’s dentures underfoot, it’s clear that she is also in dire need of psychiatric help. 70’s sex symbol Anita Ekberg plays it straight and austere, saving the hysterics for her hallucination scenes. Once the murders begin, the film seamlessly takes a competent giallo bent and weaves it into the soap operatic plot, accompanied by the haunting chorals and score of Alessandro Alessandroni. Director Giulio Berruti’s confident handling of visuals is comparable to that THE DEVILS (1971), with support from cinematographer Antonio Maccoppi (NUDE FOR SATAN). It all culminates in a jarring exploration of piety and psychosis— with boobs. 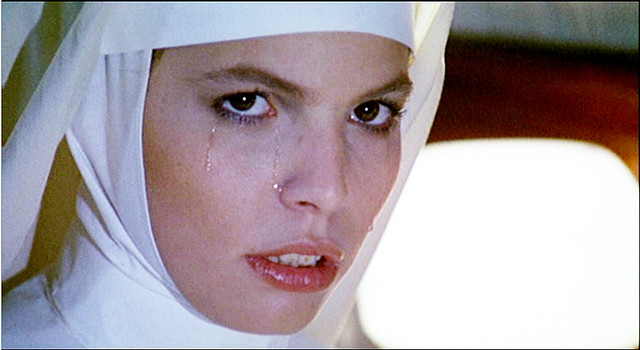 Though the gore from KILLER NUN’s kills is a bit pedestrian, the film still packs a fair amount of shock-and-awe depravity into its 85 minute runtime. There are only a handful of onscreen deaths, and they vary in gore and audacity. Among the more shocking moments are a body being thrown from a balcony (we are allowed to witness its impact upon the pavement), and a vicious needle-and-scalpel attack upon the face of an elderly witness, in extreme close-up. The sexuality varies as well: an impromptu sex scene shows both participants fully clothed (except for ports of access), while the sex in a lesbian relationship is implied, though the younger participant’s nude body is on full display here and there throughout the movie. Sister Gertrude develops a nasty morphine habit, but turns her back on us to shoot up; we only see evidence of her secularized fall from grace in the track marks on her arm later. But as with most nunsploitation films, it’s not the act, it’s the unholiness of it all. These are women of God, and the offensiveness lies in their dropping their rosaries and clutching daggers instead. The outrage comes from seeing the nuns keeping their habits on, but shedding the rest of their robes and writhing without a shred of modesty. In this respect, KILLER NUN meets all expectations for boldness. 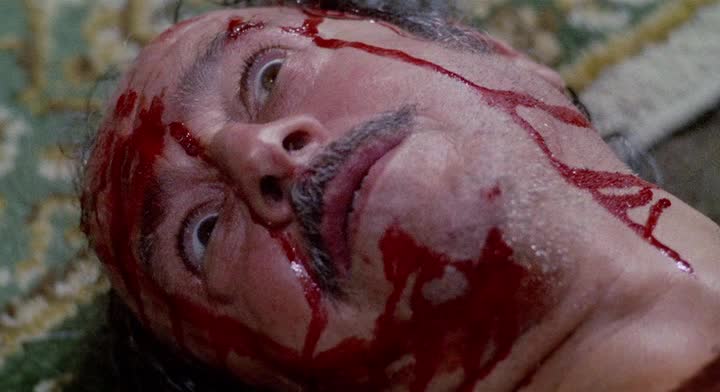 KILLER NUN was made in Italy, a country where the Catholic Church exerts a considerable amount of influence. As such, the powers that be didn’t take kindly to the blatant condemnation of the Church’s patriarchal way of life and quickly banned the film in its home country. With the tagline: “From the secret files of The Vatican!!!” and a cover depicting a nun on her knees nuzzling a man’s crotch, it’s not difficult to conclude why The Church and the State felt the need to shut that down immediately. Further up north in the United Kingdom, the film was added to the DPP list of “objectionable” films in 1983, and later released with 13 seconds of cuts in 1993. An uncut Blu-Ray of the film was released by Blue Underground in 2004. 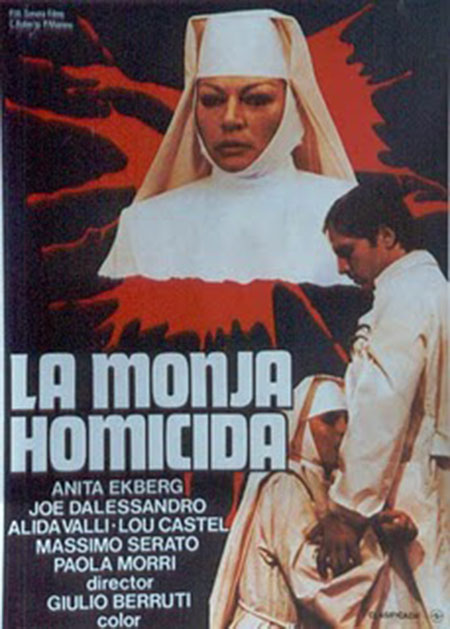 Western society has long had issues with gendered oppression and sexual repression, and its continued existence in various forms makes KILLER NUN a relevant slice of exploitation both then and now. But even without the deep dive into social commentary, the film contains enough juicy bits and melodrama to make for a raunchy good show.