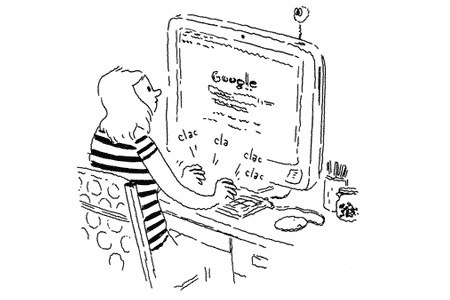 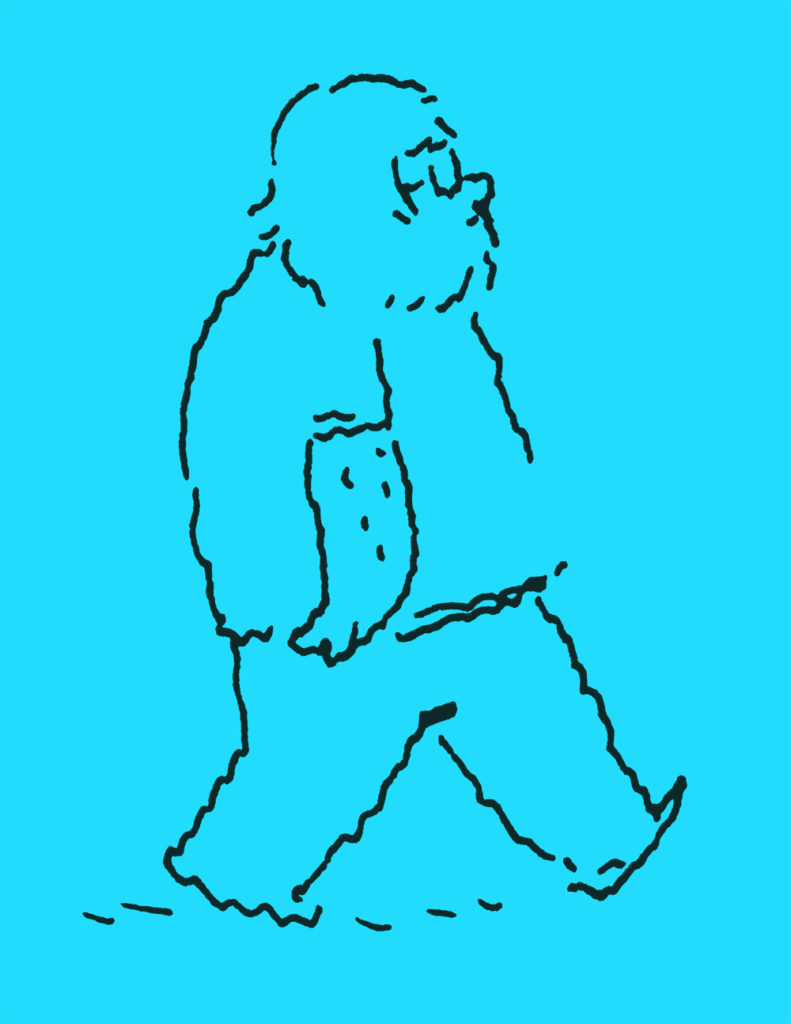 It’s something, isn’t it? Sometimes a mere 28 pages can make you feel all kinds of ways.

Such is the case with Pascal Girard’s Apartment Number Three, an unassuming-on-its-surface little number that took a long and circuitous route to getting where it is today (which, “spoiler” alert as to where this review is going, should be right into your hands as soon as possible), starting life as 24-hour comic in 2010 before being re-drawn, polished up, and published in French (I’ve included a page in its original language with this review just because, hey, why not?) by Montreal’s Colosse the following year, and finally landing an English translation/re-publication at the tail end of last year courtesy of John Porcellino’s Spit and a Half. Whew!

Gotta say that it was all worth it, though, and that its complex and time-consuming path traveled is proof positive that quality material will always, or at least hopefully, find its way to as broad an audience as possible. Clearly, then, Girard’s comic had — and has — a lot going for it, even though its relatively short length would seem to belie it as being a rather simple, straightforward story.

That’s the thing, though — in many ways, it’s anything but. 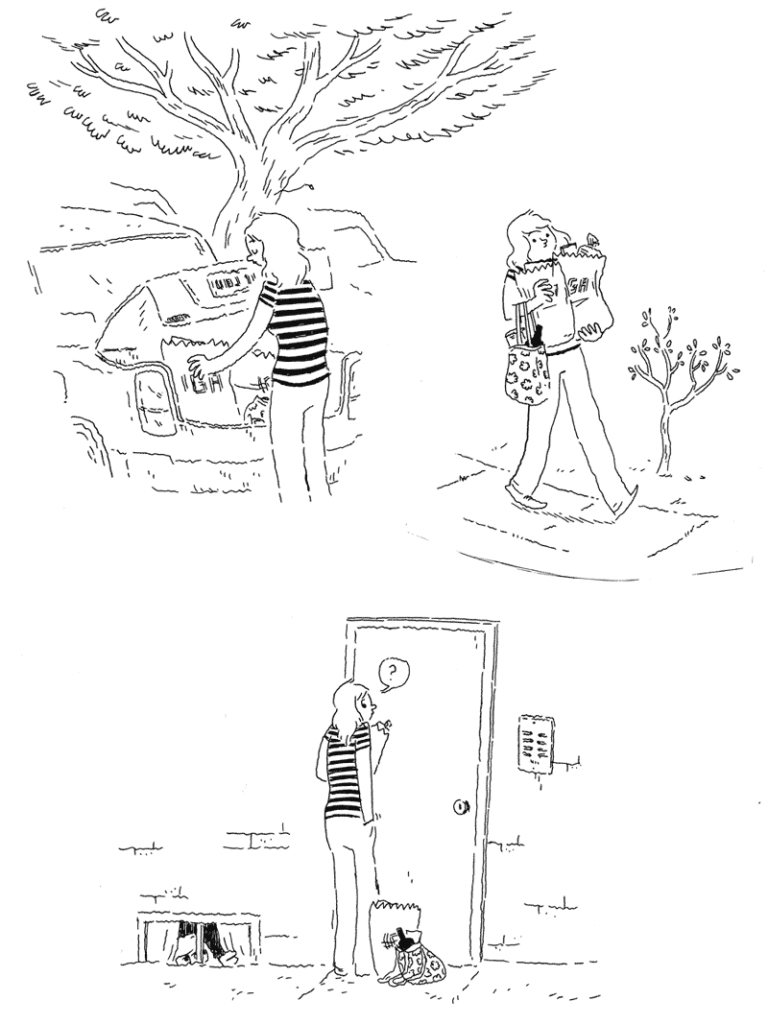 Indeed, a stranger tale of obsession than this isn’t something you’re likely to find : our protagonist, Girard himself, casts one longing gaze too many from the window of his dingy basement apartment in the direction of his fetching neighbor, Sandra, triggering a weirdly reciprocal interest-from-a-distance on her part. Who is this guy who’s always giving her the eye? What’s his story? What clues can she find as to why she landed on his radar screen?

Heeeeeyyyyy — that’s what Google is for, right? A quick bit of online research fills in the broad strokes, but Sandra needs some details. The kind of information, she figures, that only a detailed examination of his living space can provide. The problem is, Girard’s an extreme introvert and almost never ventures outside the house. Until one day he does, and she knows she dare not pass up her perhaps-only chance to get a look inside his dwellings and, by extension, his mind. She won’t have much time, of course, but things get even more interesting when it turns out that she has even less than she bargained for. 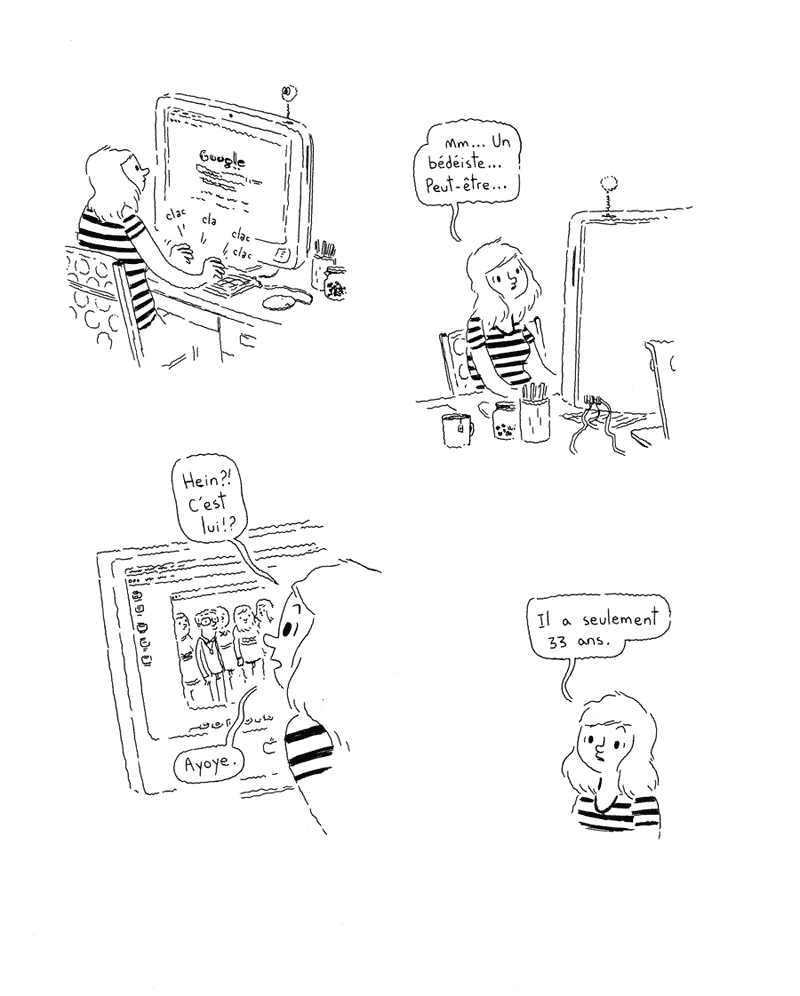 By all accounts, this story has the potential to be extremely creepy. The voyeur becoming the voyeured-upon, and vice-versa, is a wonderfully basic premise that somebody coulda/shoulda thought up long before this, but is nevertheless, at its core, a disturbing one — at least in my book. But I dunno. Maybe it’s Girard’s loose, “squiggly,” but undoubtedly expressive drawing style. Maybe it’s his free-flowing, border-less panels. Maybe it’s the contrasting nature of each character’s obsession, Sophie all wide-eyed and enthusiastic, Girard shy and reclusive. I can’t say for certain, but somewhere in between all of that an overall tone that flirts with being downright charming emerges. You may even find yourself wanting the two of them to get together, bizarre as the circumstances facilitating this potential union are. What is and isn’t okay to hope for when two people seem to have reasonably pure motives that they each pursue by less-than-pure means?

Fair warning: They do meet. But it doesn’t go as expected — which is saying quite a bit when you consider that by the time it happens, Girard has utterly obliterated the very notion of reader expectation anyway. Don’t ask me how that works, but he manages to surprise even when you have zero idea of how things are going to play out, never mind how you feel they should play out. That right there, dear friends, is pure cartooning skill at work. 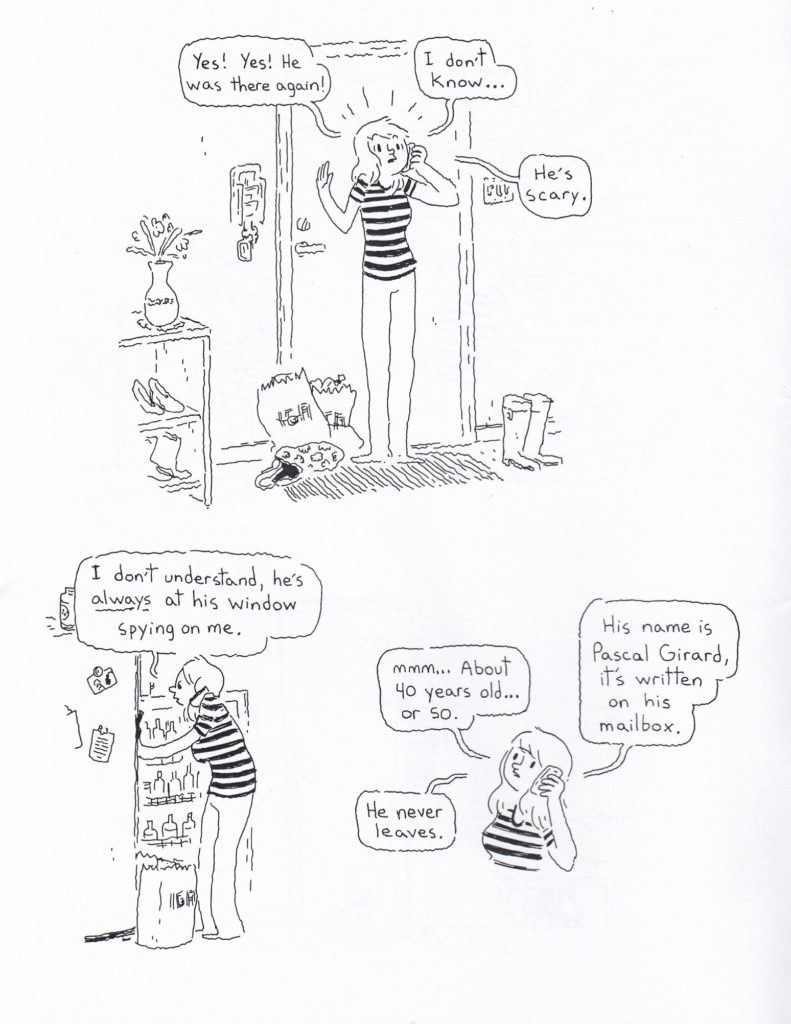 Superlatives are an easy thing for any critic worth their salt to come up with, it’s true, but Girard’s comic is so impressive for so many reasons that it’s honestly difficult to choose which ones to apply to it. There’s a world of quietly-expressed amazement and wonder in these pages that more than likely is unlike anything you’ve ever experienced before. It’s Hitchcock by way of Richard Curtis with none of the dark psychosis of the former or the pathetic, cloying sentimentality of the latter. It’s a disarmingly heartwarming look at a situation that, on paper, lends itself far more easily to suspense, even mild disgust. It’s all kinds of brilliant and every kind of achingly, desperately, and beautifully human.

Even if you’ve only got five bucks to your name, you’ll be glad you spent them on Apartment Number Three. Get it from our friend John Porcellino at this link right here!