Marvel Legends are the line of action figures released by Hasbro in groups, or waves, every few months per year. They’re six inches tall (on rare occasions a little more or less), and every wave contains six or more parts that when combined, can be used to build an additional figure. That, and the overall quality of the line, are the two aspects that make it such a ridiculously addictive hobby, at least for this comanchero.

In 2017 there were seven full waves of Marvel Legends released, with several exclusives that make the precise number of figures that came out this year generally tricky to pin down, at least for me, as a maroon when it comes to things like counting. (By exclusives I mean that few figures can only be found at Toys R Us, for example, or Walgreens, or God help you — at conventions.) I’m not counting the Black Panther wave that just came out in advance of next month’s movie, because I didn’t get my paws on any of those until it was already 2018.

This is a relatively recent obsession of mine. Feel free to skip this article if you don’t share it, but in case you do, I’d love to hear your thoughts about this list, if the order is infuriating, or how as a near-total newcomer to collecting, I got every last thing wrong. [Starting with the banner image above — that Ghost Rider won’t be released until later this year! I have a stupid sense of humor.] 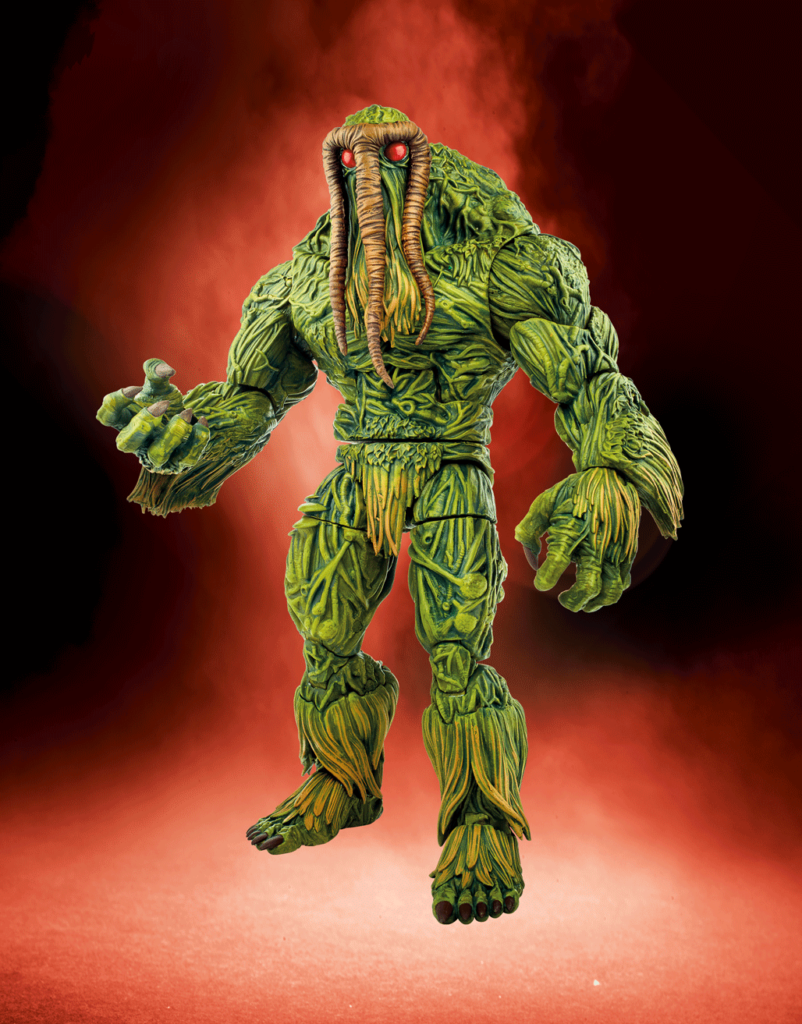 I never really got the appeal of this character, since I wasn’t even born until the late ‘seventies and I’ve never been much of a stoner, but he sure is fun to make dumb jokes about on Twitter! That said, his figure is fucking awesome. I can’t fathom why he’s the Build-A-Figure in the Netflix wave, alongside Punisher, Jessica Jones, Elektra, and Daredevil, but then again if they’re about to introduce Man-Thing to those Netflix shows then I’m going to have to catch up on all of them. I think that’s what’s been holding me back from binge-watching so far — no tuber-faced swamp-monsters. 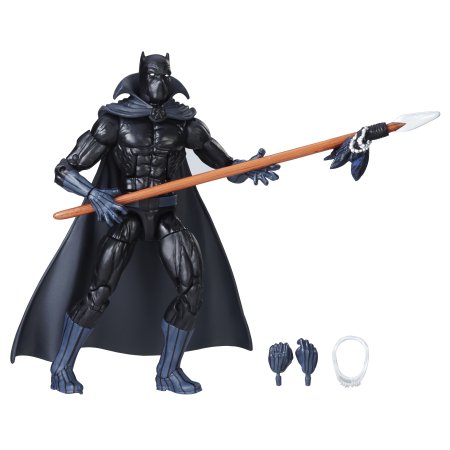 This guy was a Wal-Mart exclusive, made to resemble the costume he wears in the comics. There was already a movie-styled Black Panther that came out to promote CIVIL WAR, and there’s a new one already for 2018, but it’s been so long since I’ve been craving a figure of one of my all-time favorite Marvel characters that even though it’s suddenly an embarrassment of riches, I just had to get this character on this list somehow. 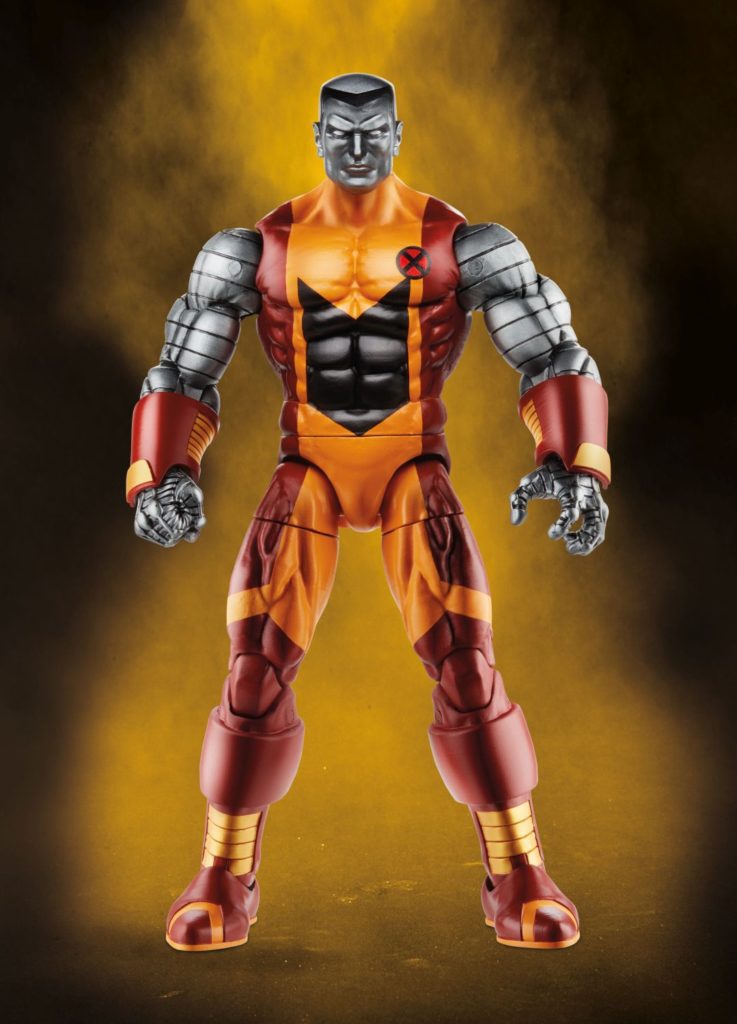 This is such a great figure. Totally a contender for the top ten. He’s like a head taller than most of the other X-Men Marvel Legends (and at least two heads taller than Wolverine), just the way he should be. The metal effect is rad. But what the hell is he wearing, guys? Is that look taken from a current storyline in the comics? I have no problem whatsoever if Colossus feels like it’s time to go through a Freddie Mercury phase… 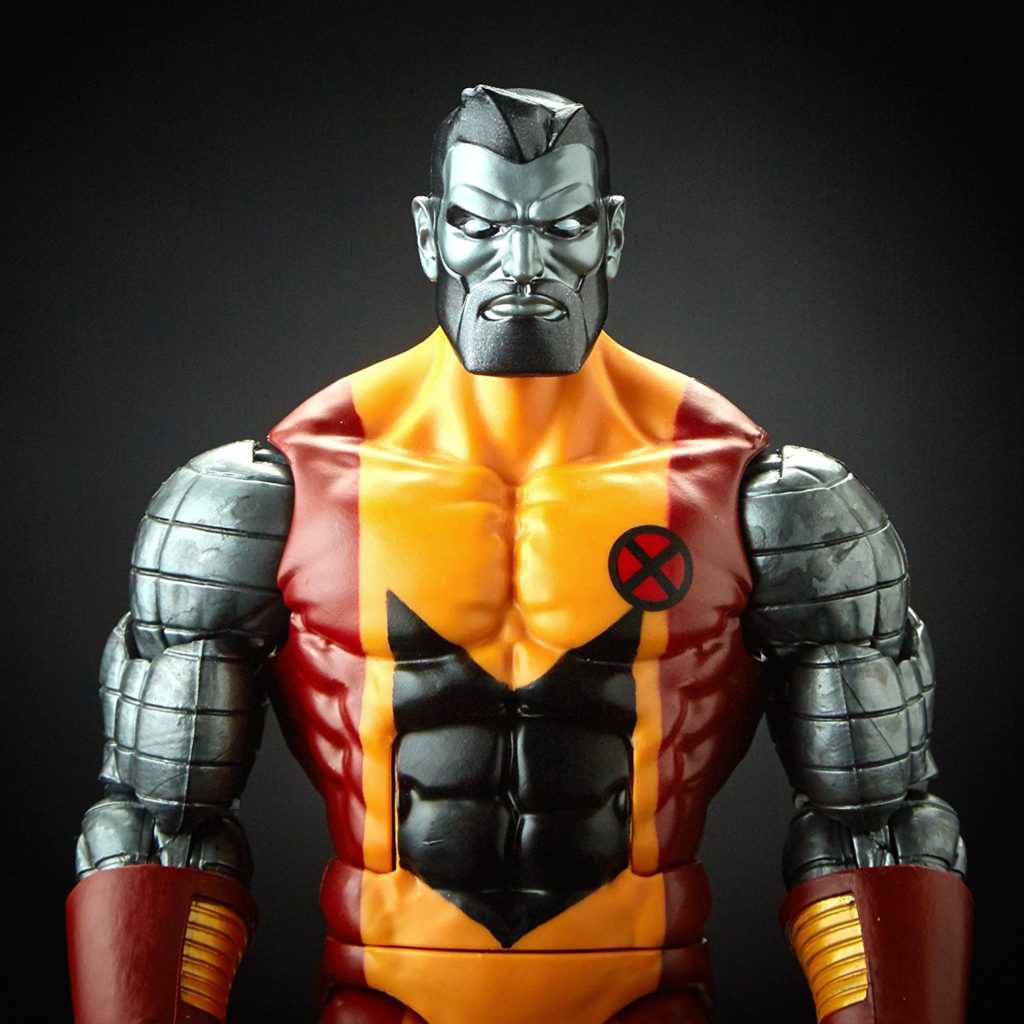 But as long as we’re headed in that direction, why can’t we get a good old-fashioned shirtless Colossus? Let that metal chassis breathe! 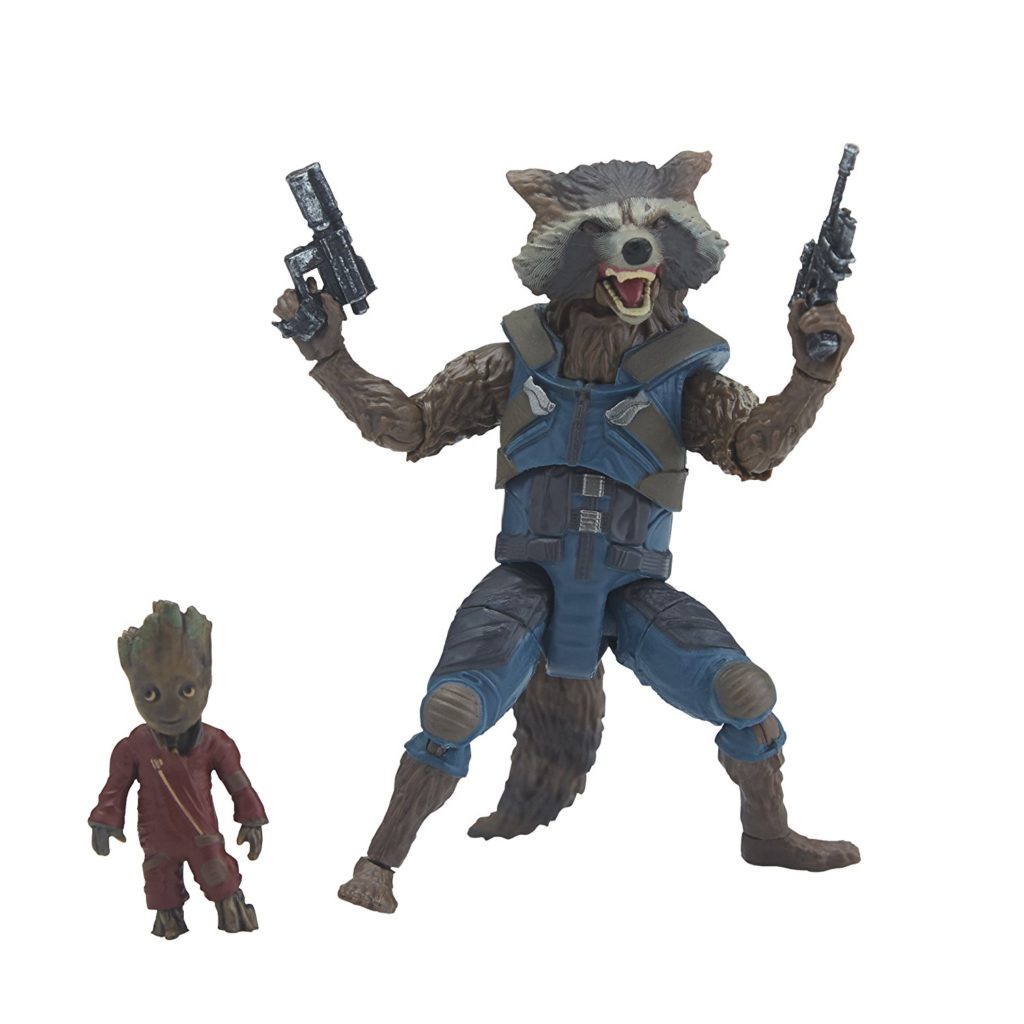 From big to small, here’s the tiniest Marvel Legends figure I think there’s ever been — what’s amazing about this guy, and which you probably can’t tell even from this picture, which is two or three times as big as the actual figure, is that this itsy bitsy Rocket is crazy detailed and crazy posable. He’s so little it’s hard to feel like you’re getting your money’s worth, even though he comes with a big Build-A-Figure piece, a second and calmer head, and also a Baby Groot to keep him company. This is a weird case of something being TOO good — with everything nice I said about it, I still feel a little underwhelmed. Maybe I’m just not worthy. 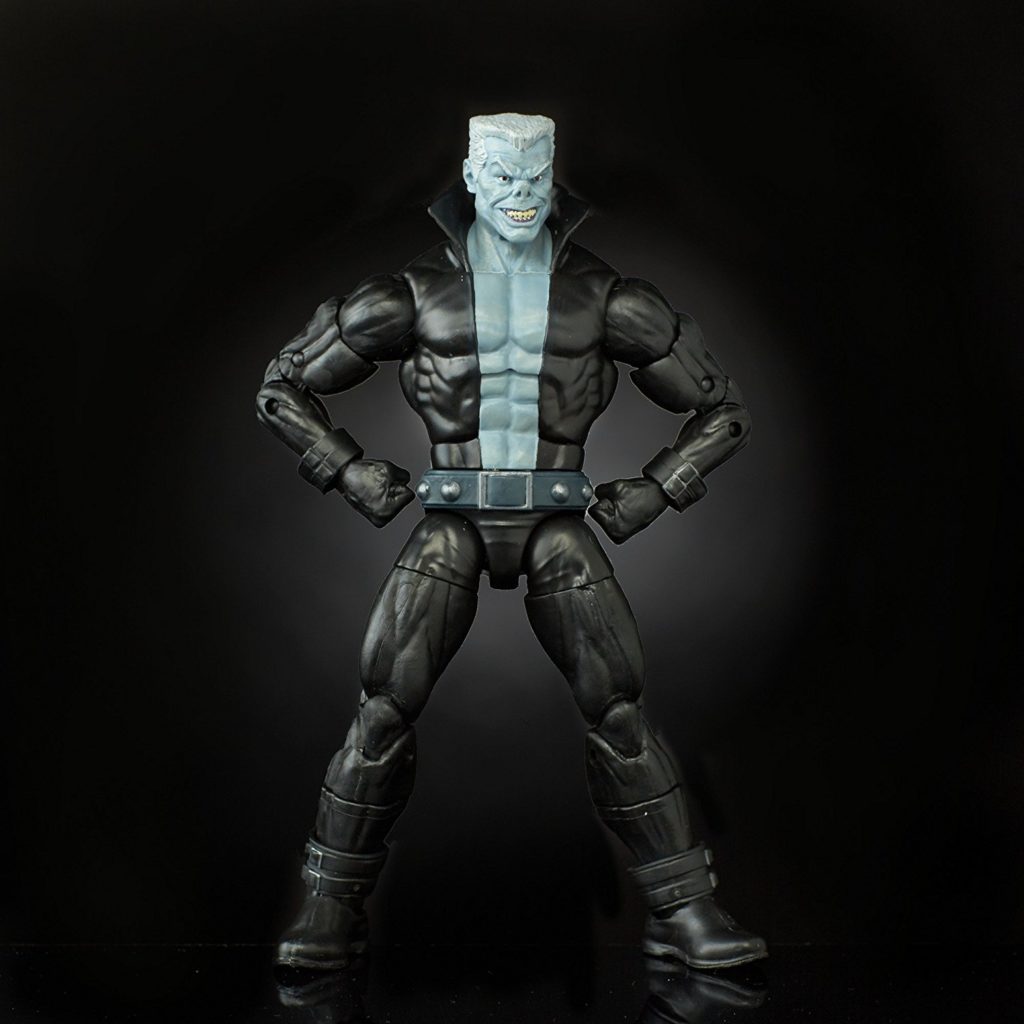 On the plus side: That punim. The sneer, the Phantom Of The Opera nose, the scary eyebrows. Totally looks like he stepped off a Sal Buscema comics page. But again — why’s he dressed like that? I get it, Tombstone did wear that Studio 54 costume in the comics, but he also wore that jet-black John Wick suit, and you tell me which one is cooler. 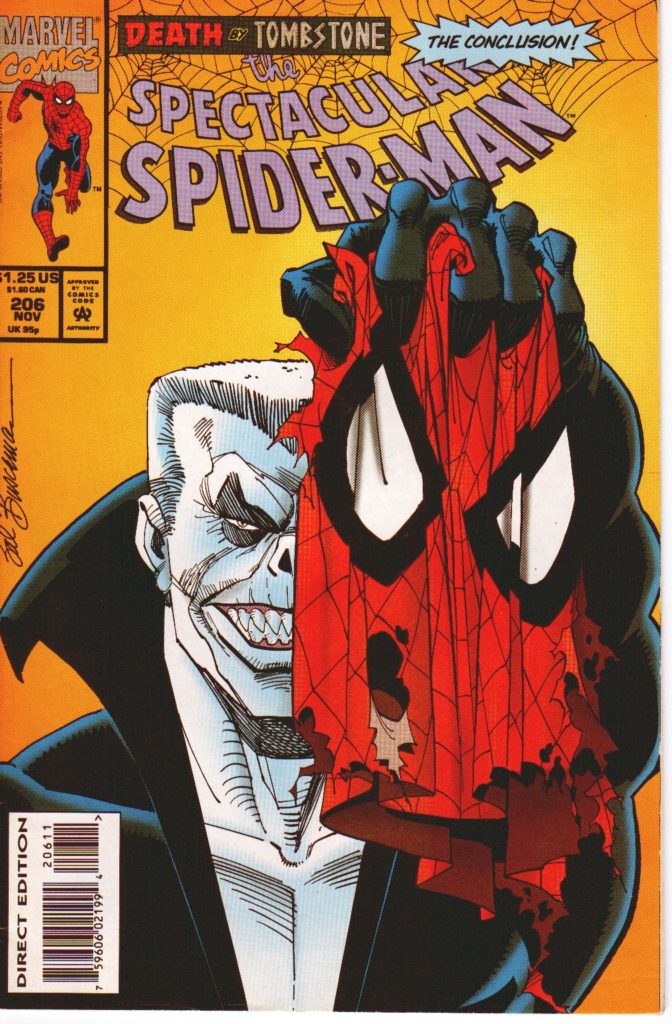 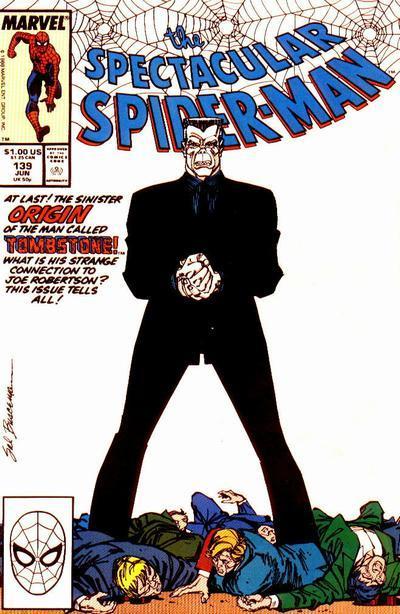 Okay, enough of the runner-ups, or runners-up, whatever, here we go with the real deal. 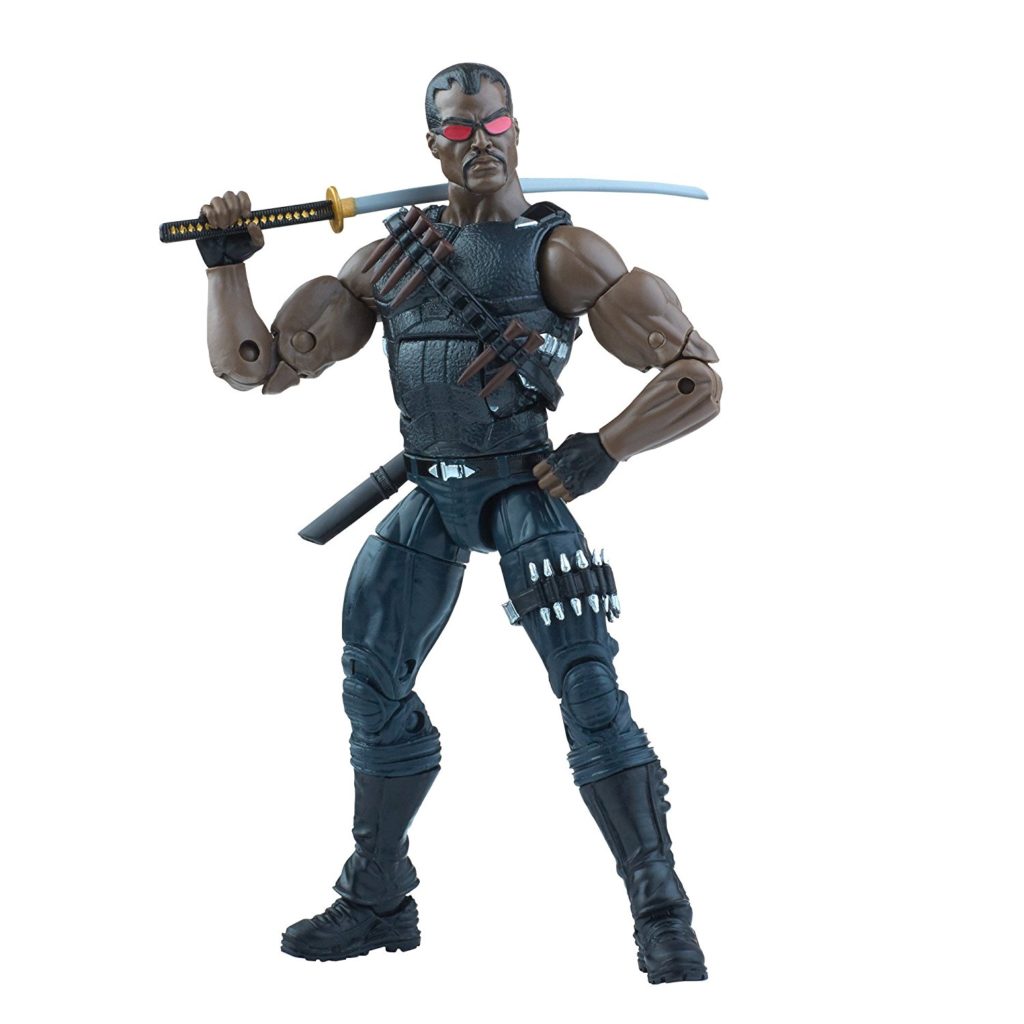 I’m not entirely convinced this is the absolute best version of Blade that will ever be. I have a dream that a vintage 1970s-style Tomb Of Dracula Marvel Legends series is still out in the future for me somewhere. That said, it’s a motherfucking Blade action figure. Top Ten material just for existing. 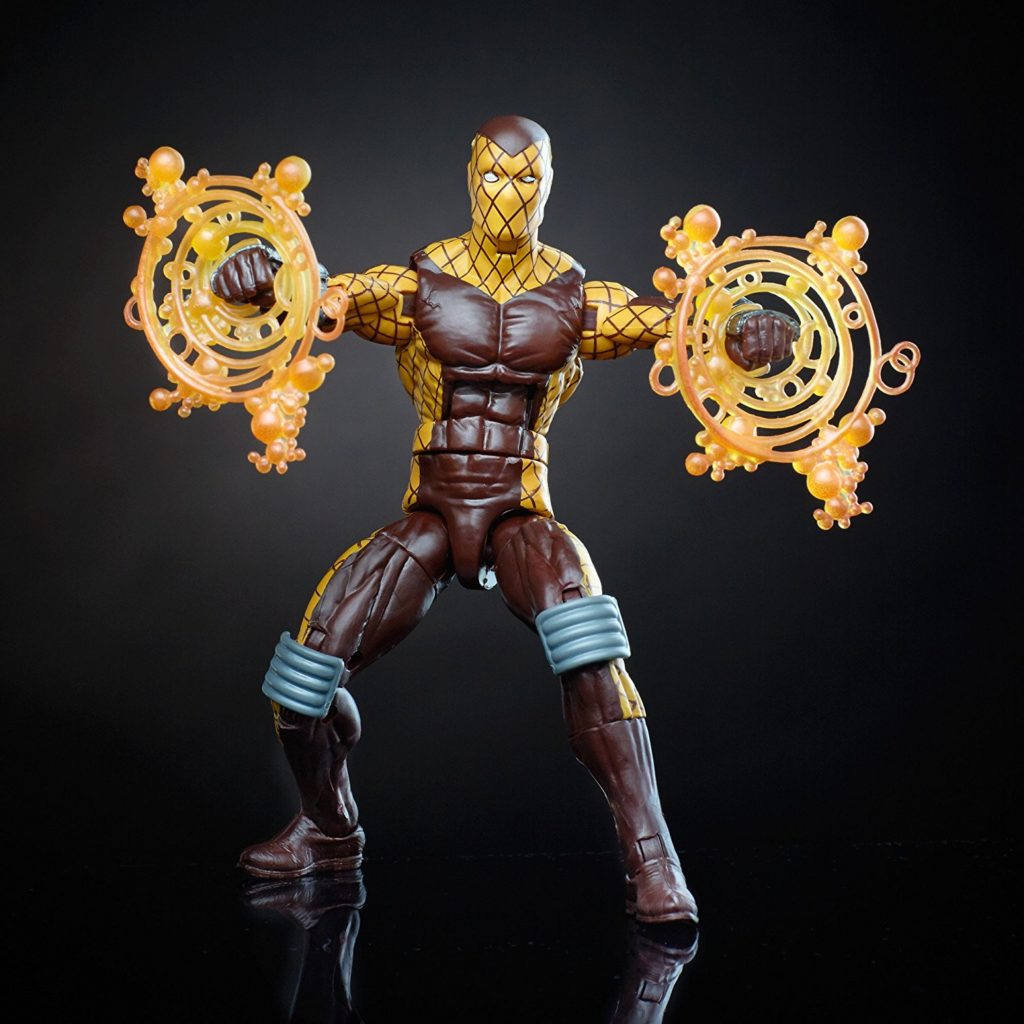 I always liked The Shocker because he dressed up in a quilt and took the name of a very specific sexual activity. Also, look at his amazing expression. He looks like he just went to Urban Dictionary and saw for the first time what I’m referring to. 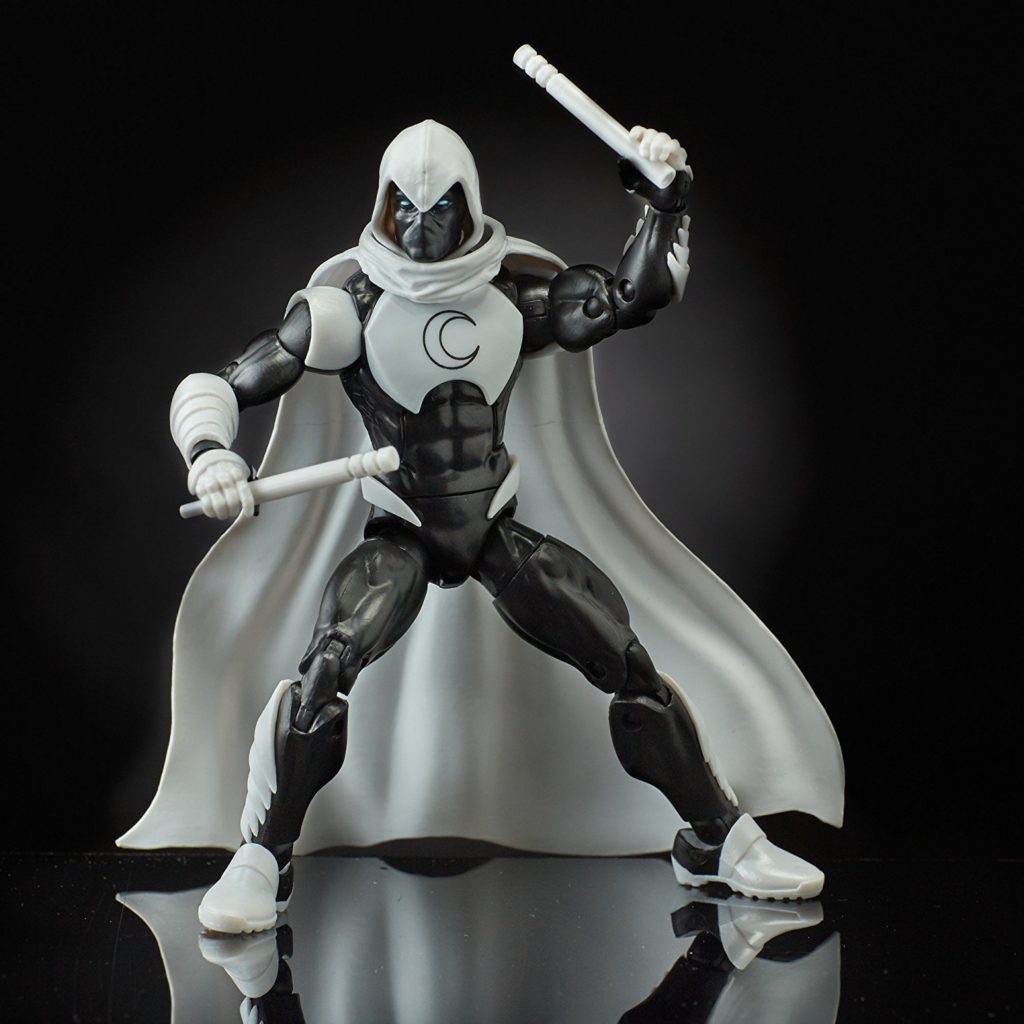 I always liked Moon Knight for some reason. He’s Jewish, he’s touched in the head, and he’s personally acquainted with werewolves; I guess there’s a lot I can relate to there. This isn’t his classic 1970s/1980s costume, but I guess this is how he’s looking in the comics now? Or else maybe this is what Moon Knight would look like if they made a Netflix TV show about him. I don’t know. Doesn’t matter. It’s a Moon Knight action figure! Yay! 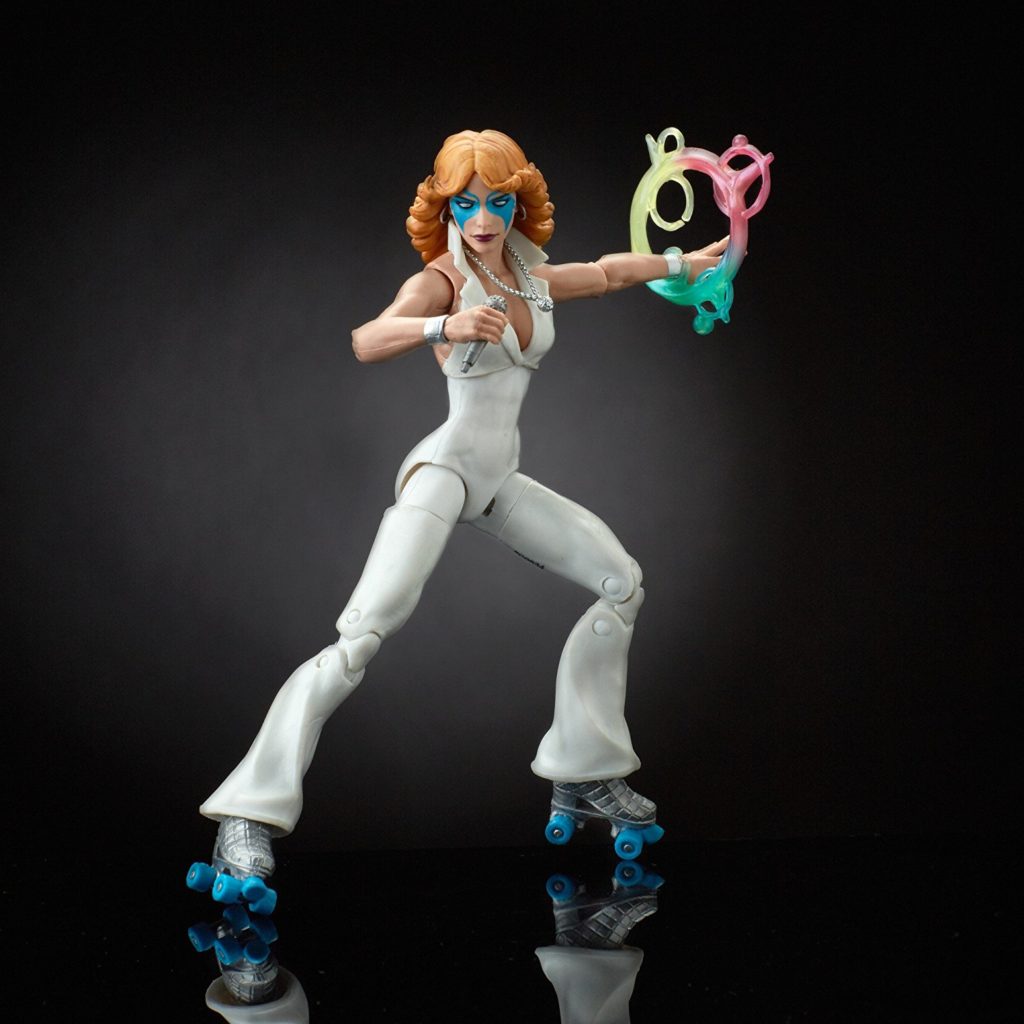 Now THIS I can promise you is the classic 1970s/1980s costume, and thank you Hasbro for that. I don’t know if I’d have interest in any other version of Dazzler. I’m not sure how big a seller this one has been among your run-of-the-mill nerds, but I am an exceptional nerd and I think it’s brilliant and hilarious, and if they make a Marvel movie about Dazzler, they should build a time machine and go get Linda Blair off the set of ROLLER BOOGIE. 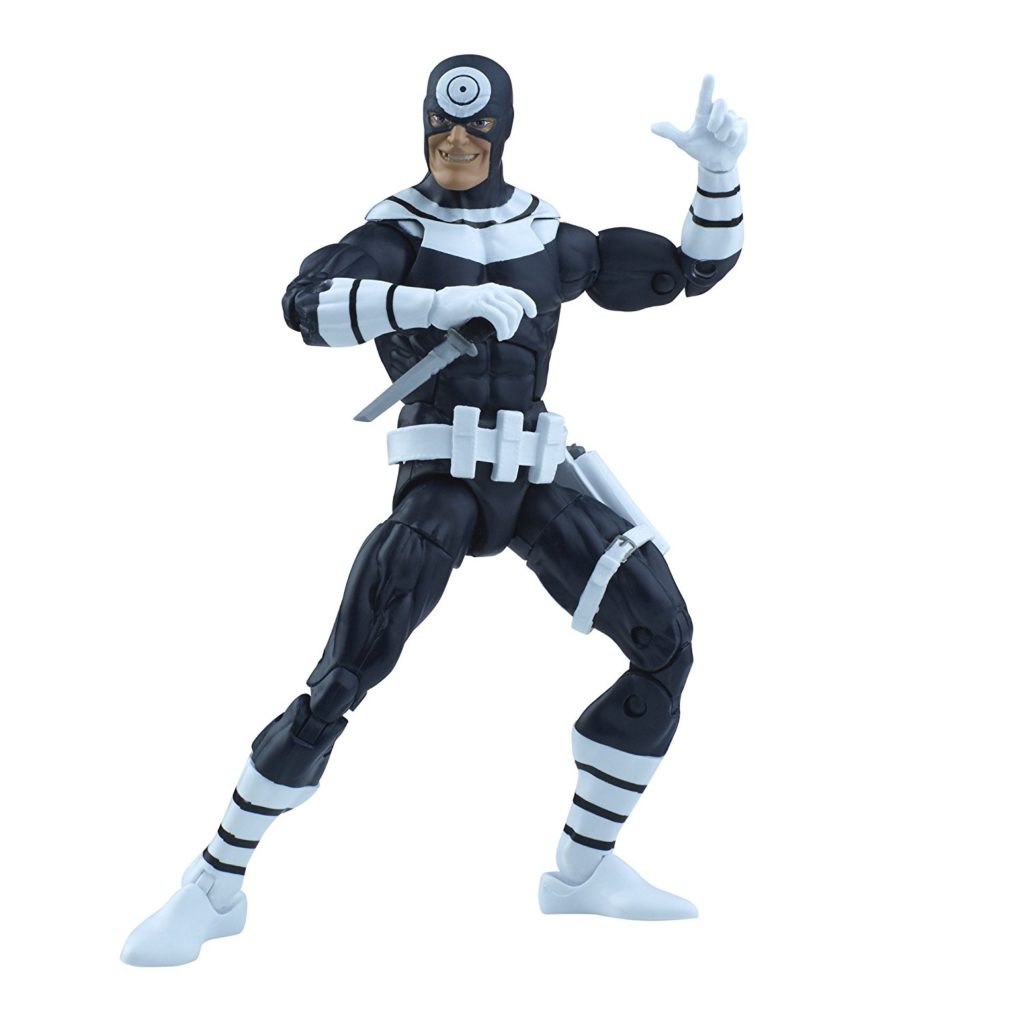 Since I started collecting Marvel Legends a couple years ago, I’ve since tracked down the previous Bullseye, made by Toy Biz several years ago. I like that one because it’s pretty fiercely ugly. One thing that’s always been comical to me about superhero stories is that everyone, good or bad, is superhumanly attractive. In a world where it’s that common for people with unusual abilities to run around in wetsuits, isn’t it possible that some would be skinny, or overweight, or have terrible hygiene? To me Bullseye in particular is a character who I can’t imagine spends a lot of time combing his hair or brushing his teeth. Or if Daredevil punches his teeth out, I can’t see him going to the dentist to get them fixed. So that’s why I like this new Bullseye — he’s not as creepy-looking as the older figure, but he’s got a missing tooth in his deranged grin, and the alternate bald head he comes with is even wilder-looking. More crazy-eyed super-characters, that’s what I demand. Well-adjusted people don’t spend their evenings throwing punches on rooftops. 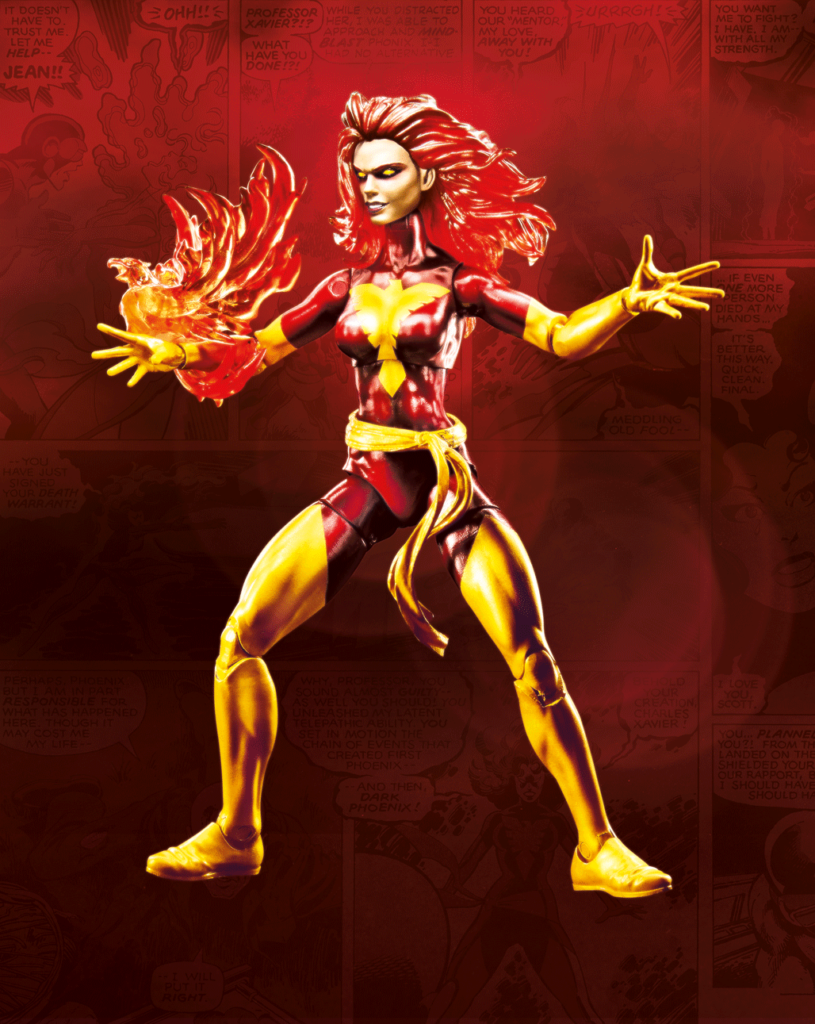 This figure comes in a Toys R Us exclusive two-pack with an old-school Cyclops, as well it should, and it would rank much higher on any list of ten if it wasn’t so hard to find. (I don’t think it would be fair to name a number-one figure that people would have trouble getting for themselves.) But if you can find this one, check it out. It’s really impressive how much detail and expression the sculptors of these things are able to achieve nowadays. Dark Phoenix comes with three Jean Grey heads, in varying degrees of goodness and evil, and you can really see the change. There’s real artistry in these figures! 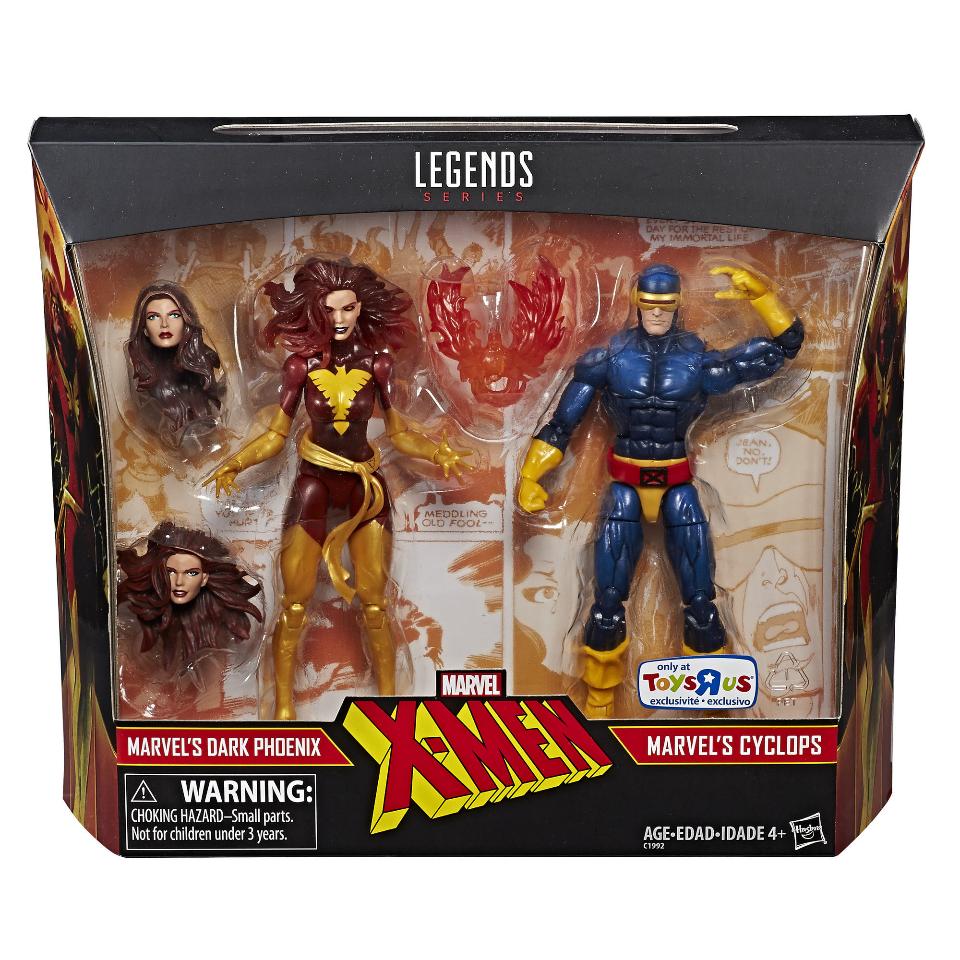 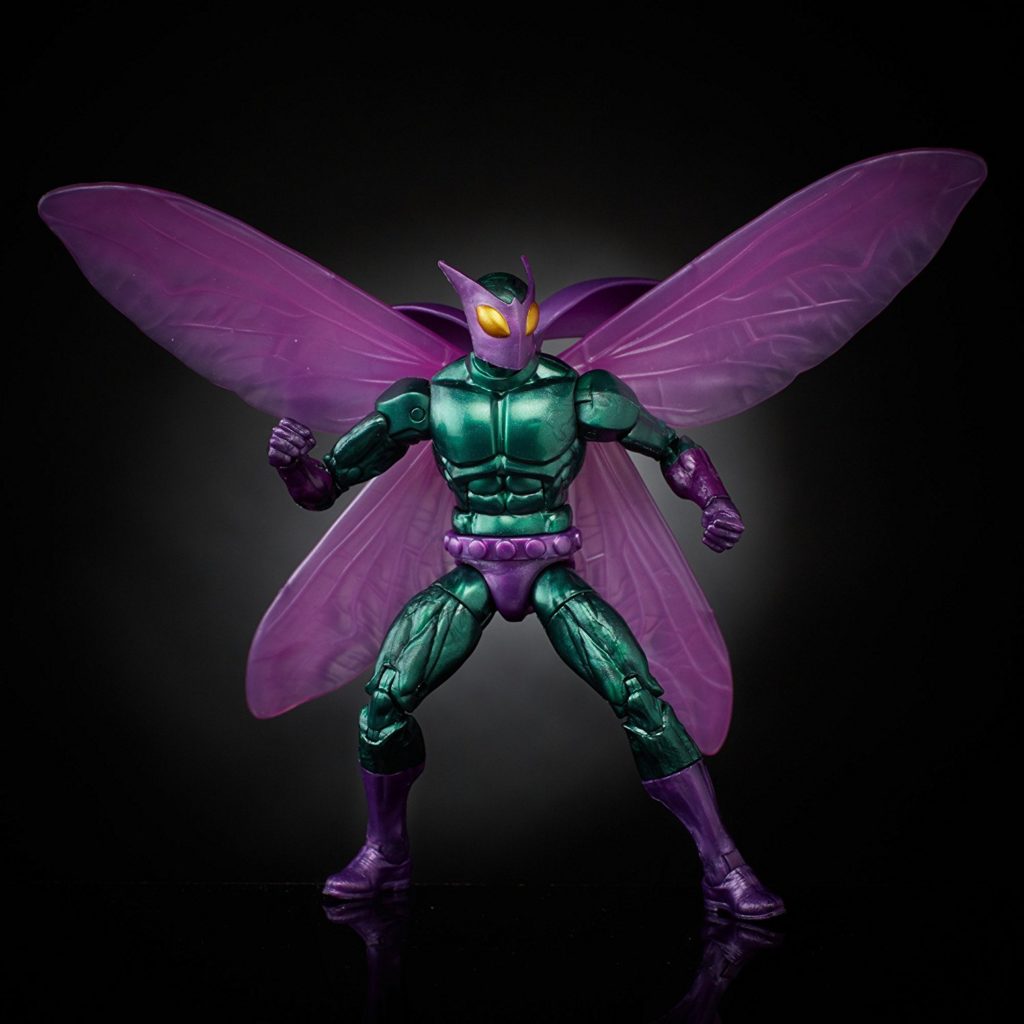 Not entirely sure why I’ve always had such a consistent passing interest in this character. For one thing, he dates back way further than you may think (his first comics appearance was in 1963). All the comics I read with him in them, in the 1980s and 1990s, had him all over the place, fighting everyone, but pretty much getting beat up all the time. (Was he a Spider-Man villain? An Iron Man villain? I could never entirely tell.) Overall I guess I’m always a fan of the underdogs, of the deep cuts, of the cultiest-cult characters. Beetle has been in Marvel Comics all along, but he’s been relatively obscure the entire time. And that said — this is a phenomenal figure! The greens and the purples are so shiny, like a real-life Japanese beetle — I love the idea of the Beetle polishing up his latest armor and getting excited to go do crimes, only to get his butt kicked all over the place by Luke Cage or the Thing. 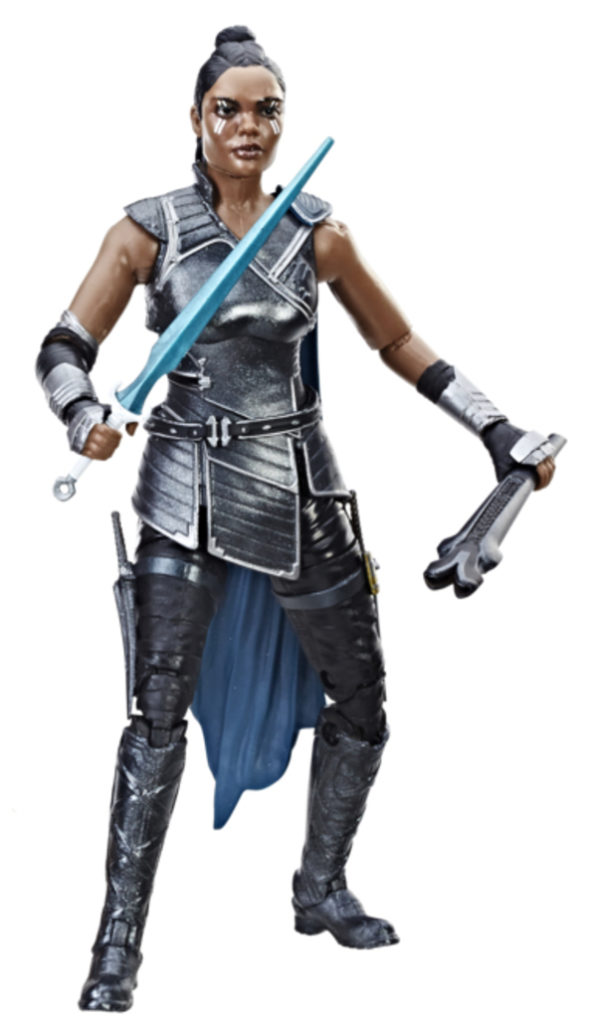 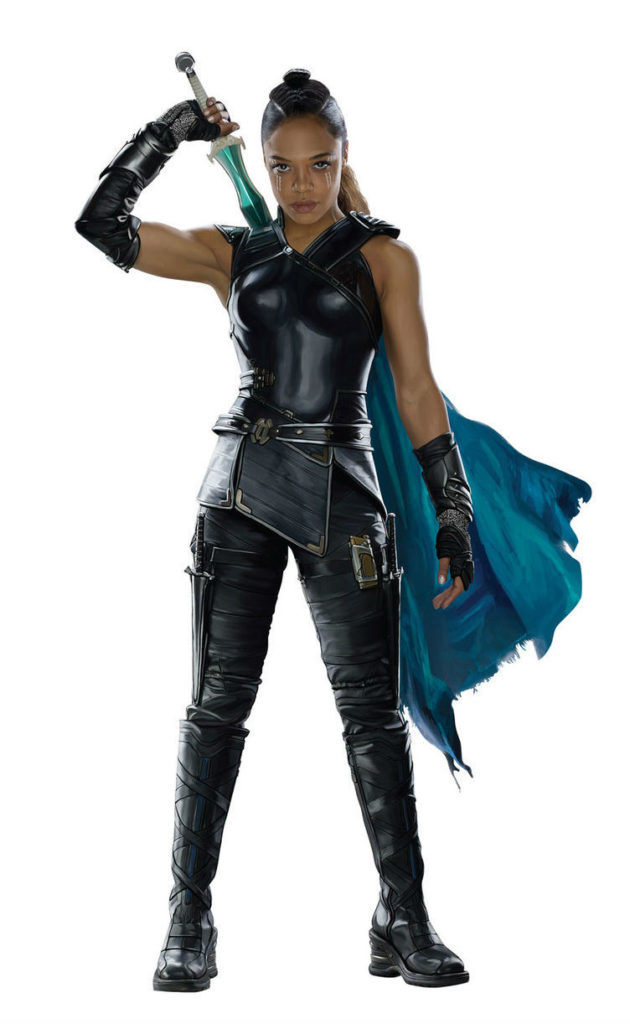 You can only find this figure at Target, in a two-pack with a short-haired lightning-handed Thor, but it’s fairly abundant at Target and you should definitely get it if you have any interest in Marvel Legends or Marvel movies. Yeah, Thor, whatever — to me, that RAGNAROK movie was all about the Valkyrie and Tessa Thompson. She’s been great for a while now, but that was THE star-making performance of 2017, far as I’m concerned. She won’t get an Oscar for it, but she did get a statue befitting her awesomeness anyway. Can you tell which one is the figure and which one is the actor? I don’t know how they did that. 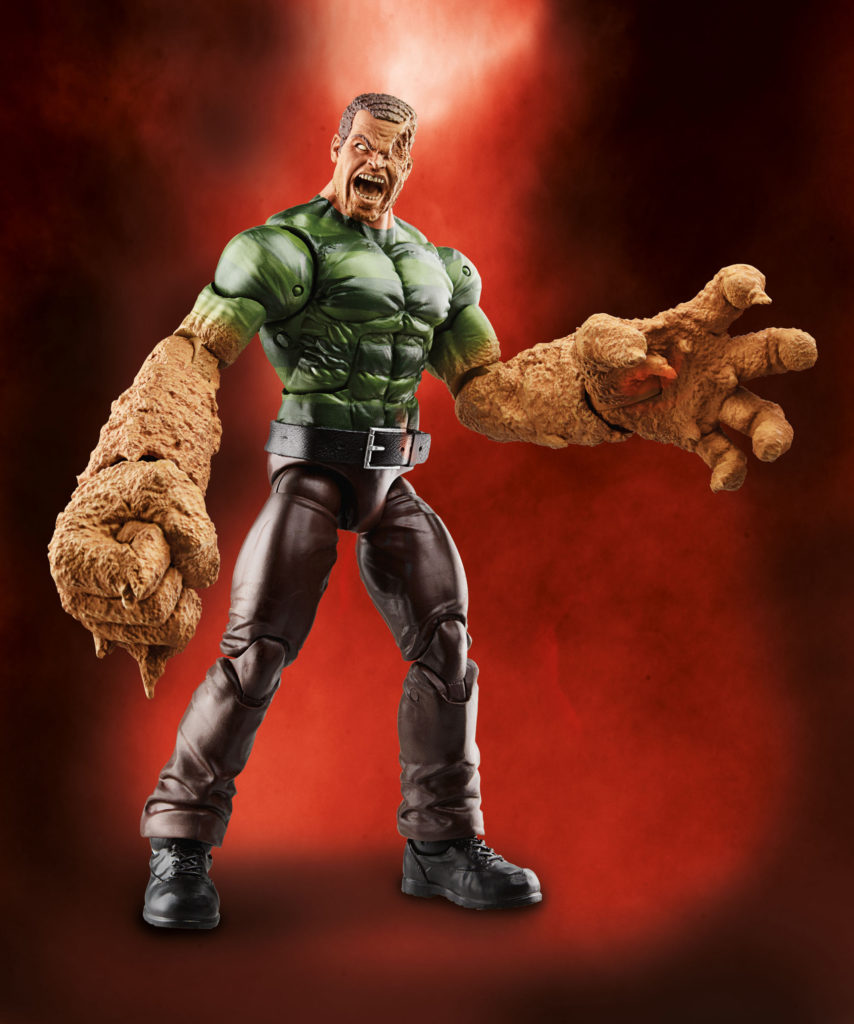 Not sure if this should count, since he’s a Build-A-Figure, but hell, I made up this list, right? There are no rules. You have to collect seven individual figures to get all the pieces you need to make him, but it’s worth it. (“Worth it” of course being a relative thing, since I’m talking about constructing a collectible figure and not getting myself any closer to wealth or glory. But it makes me happy, and that’s all that matters. Life is short! End parenthetical.) Anyway, Sandman looms over the other figures in the wave, and he has two heads, an angry damaged one and a more regular human-type face with that Norman Osborn hair. (Ever notice how the Green Goblin out-of-costume and Sandman had the same hairdo? What was Steve Ditko up to there? Aw hell, I’m in parentheses again.) Even cooler are the removable sand-creations that Sandman has in place of hands — they’re monstrous and formidable-looking, with amazing texture. They look as much like they’re made of sand as they do like they could throw Spider-Man for a serious loop! Don’t take this guy to the beach, you’ll lose him. 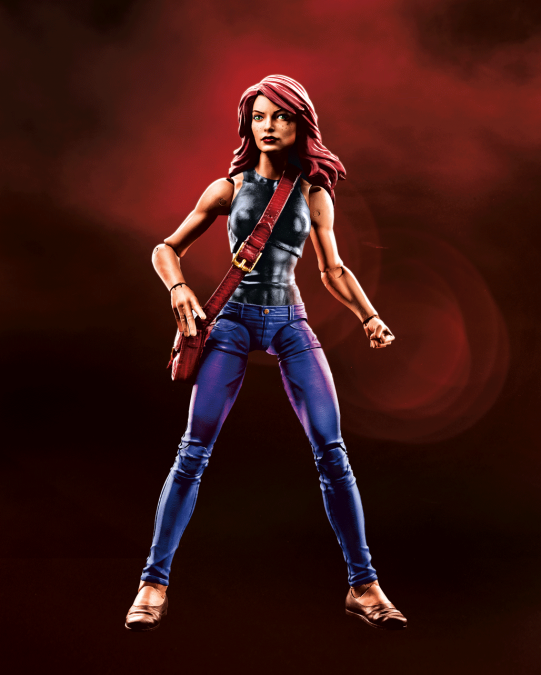 Another exclusive, another two-pack, and Lord knows I didn’t really need another Spider-Man, but how cool is it that they made a Marvel Legend version of one of the few iconic non-costumed comic-book characters? I like that MJ is a redhead but she doesn’t look exactly like Dark Phoenix up above, for example — after decades of toys that put no effort at all into the female characters, it’s great to see an individual look, and by the way, this is comic book MJ, although there’s arguably a little Kirsten Dunst there, arguably a little Emma Stone… not really much Zendaya, but you can’t have it all!

Marvel Legends has a strong chance at going down in history as one of the greatest toy lines yet to exist — all they have to do is they make an Uncle Ben and Aunt May two-pack in 2018/2019, and my vote is cast.

For more informed toy news, try this website or else this one!