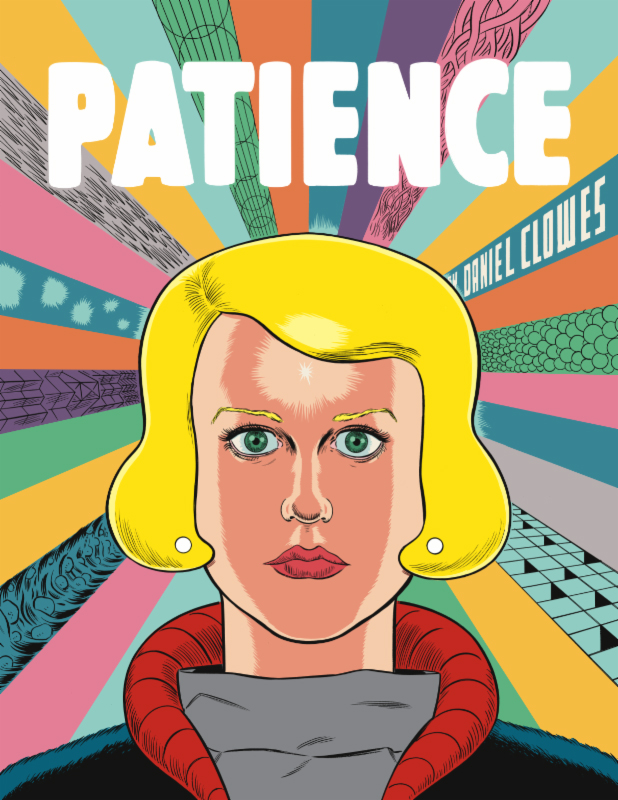 And so — here it is. Five years on from the release of his last original graphic novel, Wilson, comes (at long last) the ironically-titled Patience, Daniel Clowes’  self-described “cosmic timewarpdeathtrip to the primordial infinite of everlasting love.” Which only sounds like it doesn’t make any sense, but is, in actuality, a stellar example of truth in advertising.

Confused yet? There’s really no need to be, even though Patience hails from that frequently-most-confusing-of-all genres, the time-travel story (I won’t call it  science fiction because the “science” involved in this book is clearly and plainly absolute hokum) — and that’s down to the simple fact that Clowes actually keeps things fairly straight-forward here, and is, as always, much more concerned with his characters than he is with the plot devices he employs getting them from their various “Point A”s to their “Point B”s. And frankly, those characters feel pretty well instantly familiar to anyone who’s followed his creative oeuvre through the decades. 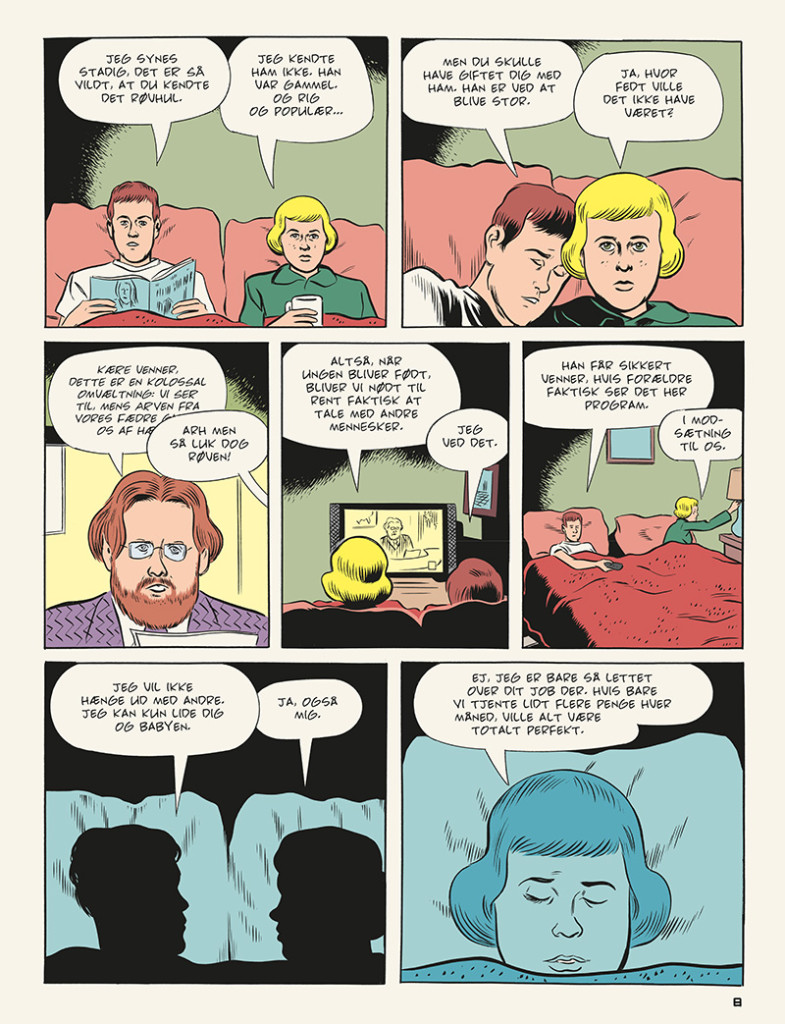 Our protagonist this time out is one Jack Barlow, at first glance a standard-issue luckless Clowesian archetype who has found what passes for undeserved salvation in the form of his wife, the titular Patience, and their soon-to-be-born first child (the story, in fact, opens with the moment of the baby’s conception detailed in stark close-up). Sure, they’re broke, and sure, he’s bullshitting her about a job he doesn’t really have, and sure, she’s still coming to grips with her fucked-up past, but somehow — some way — Jack just knows things are gonna work out. Until an intruder breaks into their apartment and kills Patience, their unborn offspring, and his entire future in one go.

When next we meet him, Jack’s a bitter old man in the year 2029 who hasn’t allowed himself a moment’s happiness in 17 years. A crackpot would-be scientist offers a “solution” most would scoff at, in the form of a mechanical-and-drug-induced time travel method, and our now-pathetically-desperate “hero” is just dumb and/or bottomed-out enough to give it a go. Lo and behold it works, of course, and as we journey from 2029 to 2006 to 1985 to, eventually, the “present” (okay, 2012) again, what changes even more than the period settings is Jack’s level of single-minded, frankly harrowing, determination. We’ve already established (or at least I’ve opined) that all Clowes stories are character studies first and foremost, and obsession is common theme in his work that goes all the way back to Like A Velvet Glove Cast in Iron‘s Clay and absolutely informs each and every action of the title characters in David Boring and Wilson. One could also argue, though — and quite successfully — that characters like Ghost World‘s Enid and Mister Wonderful‘s Marshall are clearly obsessives in their own right, as well. So, yeah — familiar turf here for anyone who’s been following along since Eightball. 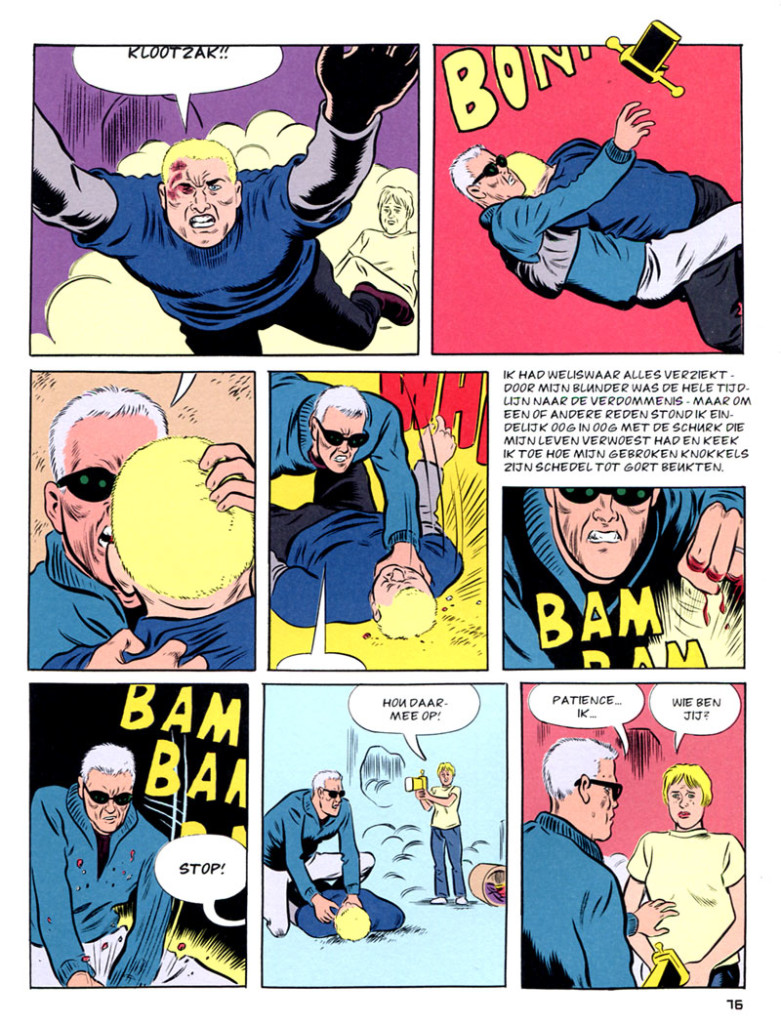 Don’t take that to mean that that there’s nothing new under the sun with this story, though. Clowes has played in various genre sandboxes before, of course, from super-heroes to surrealism to autobiography to noir fiction (elements of which certainly make their presence felt here in Jack’s constantly-running, world-weary internal monologue that wouldn’t feel out of place in a Raymond Chandler novel — hmm, Barlow as Marlowe?), but never has he wedded a deconstruction of their trappings so closely with the overall “arc” of his characters. And never has he given his typically-unlikable central figure such a concrete and well-realized reason for being a self-centered ass — nor to, believe it or not, cheer for him. Or at the very least for his aims.

Maybe the years are mellowing Clowes, or maybe he’s just adopted a more holistic view of the human condition for reasons known only to him, but whatever the reason, redemption never feels completely out of reach for Jack in these pages and, more crucially, we never feel like he, his wife, and his child don’t have it coming. Especially not after all they’ve been through.  Jack in particular may not always be easy to like — but he’s always easy to empathize with, and that speaks to a further maturation and honing of his creator’s already-exceptional storytelling skills. 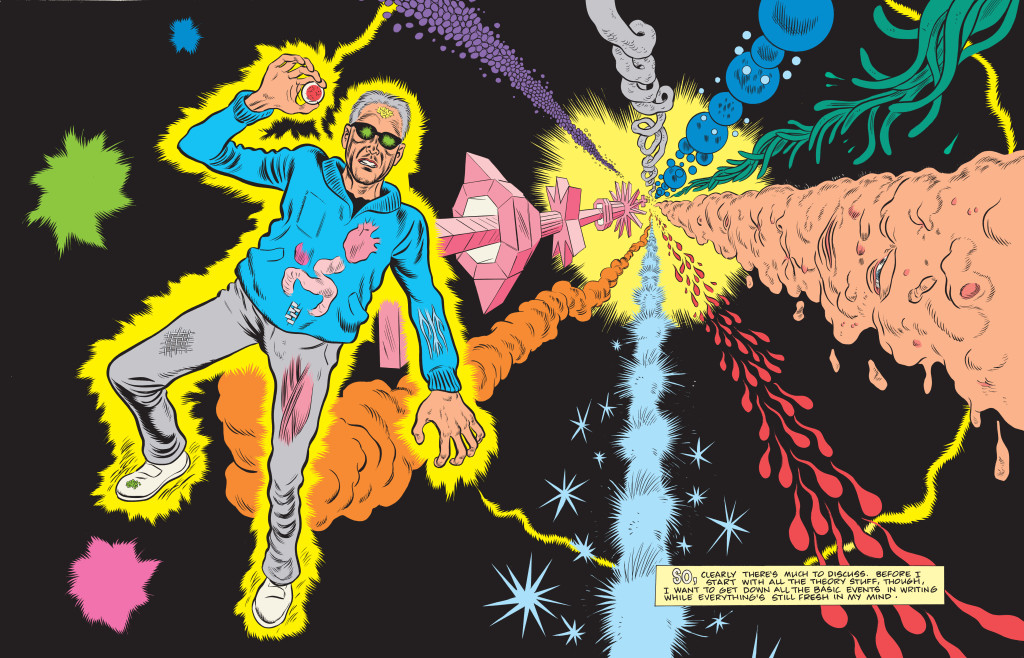 As far as the art in Patience is concerned, Clowes’ line-work is a bit less “tight,” and more “free-form,” than it used to be, and while every page of every panel is still instantly recognizable as coming from his hand, there’s a fluidity and dynamism to it that is a more recent — and entirely welcome — development. The psychedelic double-page spreads (such as the one pictured above) that we’re treated to here probably would have missed the mark by at least a hair if attempted by the Daniel Clowes of, say, 1996, but the Daniel Clowes of 2016 absolutely nails ’em with every bit as much bravado and confidence as he brings to the refreshingly- non-photo-referenced images of 1985 and 2006 bleak American suburbia. This is, simply put, an astonishing book to look at, and the lavish colors are the perfect icing on the metaphorical cake.

At the end of the day it’s, of course, an astonishing book to read. I’ve made it through Patience, cover-to-cover, twice now, and I have no doubt that many more a sitting will be spent eagerly re-examining its contents. We’re barely over three months into 2016, it’s true, but barring an absolute miracle of Earth-shaking proportions, I fully well expect this to go down as the graphic novel of the year — if not of the last several.