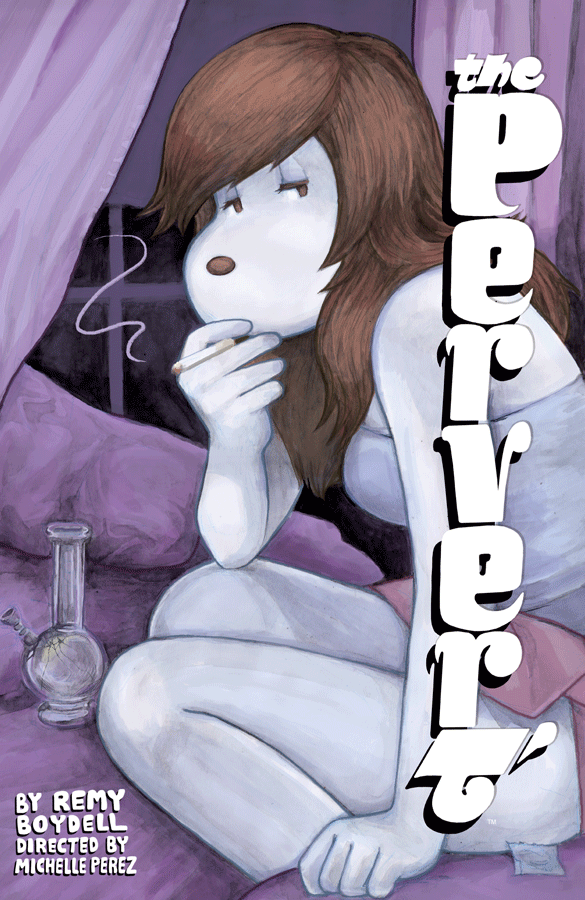 If 2017 was the “year of the woman” in comics — and I would contend that, thanks to the exemplary efforts of Emil Ferris, Eleanor Davis, Mimi Pond, Gabrielle Bell, Jillian Tamaki, Sophia Foster-Dimino, November Garcia, Annie Koyama, and numerous others, it most certainly was — then 2018 may just prove to be the “year of the trans woman.” We’ve already had Tommi Parrish’s incredible  graphic novel The Lie And How We Told It, a bold and confident statement of artistic intent that has elevated Parrish into the top tier of contemporary cartoonists, and just a couple of months on from that comes The Pervert, a collection of collaborative strips by writer Michelle Perez and artist Remy Boydell, originally serialized in Brandon Graham’s Island anthology, that gain new weight and heft and import when presented in their entirety, as Image Comics has done here. Part character study, part monologue, part “funny animal” narrative, part gut-punch, this is a book you’re guaranteed to read more than once — in your first sit-down with it.

Nothing about protagonist Felina’s life in Seattle is easy. Existing on the social, economic, sexual, and even philosophical margins, the notion of security is becoming increasingly alien to her : she identifies as female but presents as either gender depending on her “take” on a given situation; she makes ends meet (or, perhaps more accurately, attempts to) as a sex worker; she flirts with nihilism and suicidal ideation in a matter-of-fact, almost casual way, even remarking at one point that she’s arrived at a place in her mind where her “life doesn’t mean that much to me anymore.”

If you’ve been in that headspace yourself, you know what it took to get there. If you haven’t, this book doesn’t sugar-coat the journey. 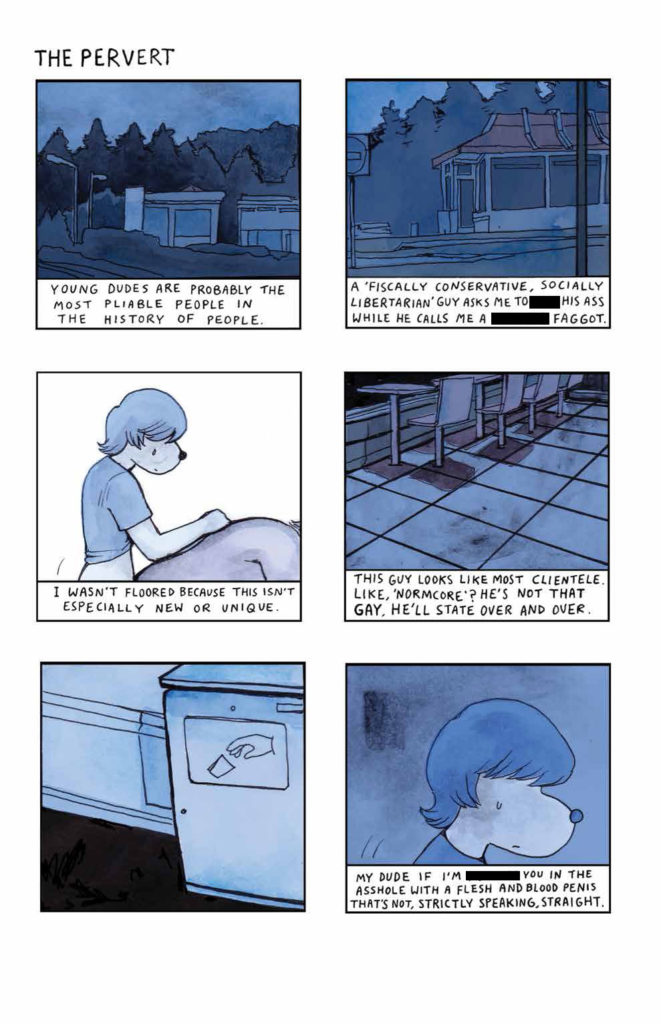 Perez and Boydell’s decision to populate their story with anthropomorphic animals may be seen by some, I suppose, as way of couching the blow — of making at least somewhat more palatable material than may be seen as alienating at best, unnerving at worst, to the coddled and/or cowed masses, but for my money it has the opposite effect, as does Boydell’s use of lush watercolors and his decision to drop the brightness down by several decibels during the book’s (decidedly non-titillating) sex scenes. What they’re doing, you see, is not giving you the option to look away. Why, just have a gander! Felina looks more than a little bit like Snoopy! And holy shit, there’s Clifford The Big Red Dog! And Simon Hanselmann’s Owl! And Choo-Choo! And they’re all awash in warm, inviting tones! Your gut reaction? I can look at this — hell, who wouldn’t?

The 2×3 panel grid on damn near every page is also inherently conservative and, by extension, wide open to subversion. It is, after all, the layout that even non-comics-readers can intuitively understand without difficulty. But it certainly doesn’t take long to clue into the fact that no attempt at streamlining can define or contain or formalize Felina’s existence — she’s constantly in flux, and not just in terms of her dysphoria. She’s forever one ill-informed decision away from homelessness and destitution, mental and emotional collapse. Perhaps no scene illustrates every aspect of the maelstrom surrounding her existence at once than one in which an OK Cupid date she meets for ostensibly “non-professional” reasons, a cis female cat, turns out to have a boyfriend — who, for his part, turns out to be the one who set the whole “date” up because, you guessed it, he wants to get it on with both of them. Felina goes from elation at the nearest thing to a “magical” evening she can possibly have, to heartbreak at played for a sucker, to naming her price because, hey, happy or sad she still needs to eat and pay the rent. 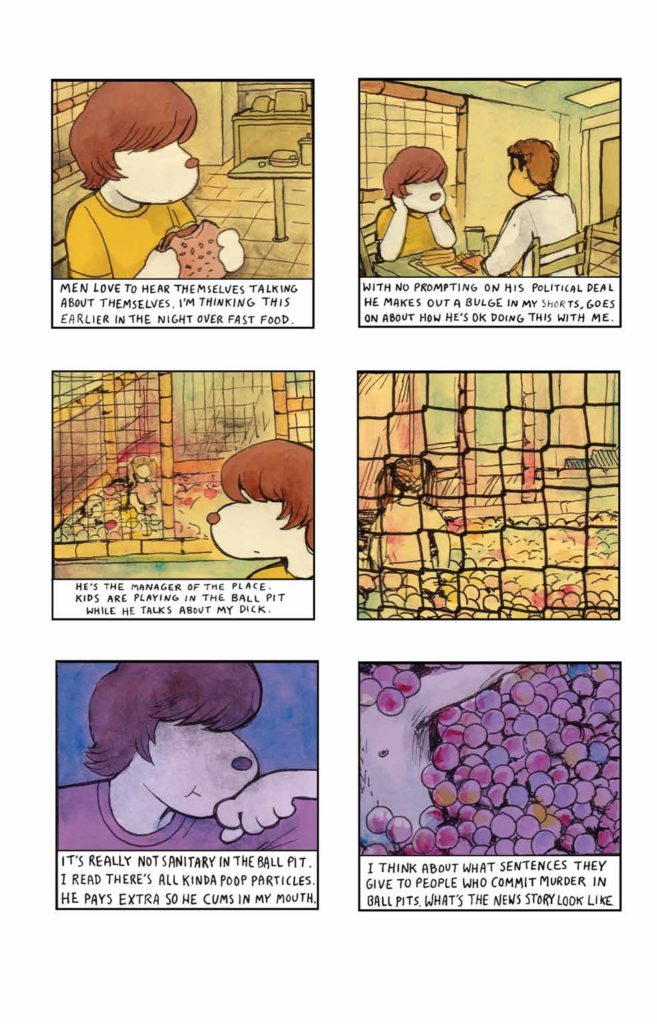 A book that starts with its protagonist turning a trick in a McDonald’s “Playland” (which she then spends on a meal there) is obviously one where the economic survival of the lead character is far from guaranteed, but I think that Perez and Boydell are fundamentally at least as concerned with Felina’s emotional and psychological survival as anything else, and it’s those concerns that are far more unique to the trans experience — specifically the trans sex worker experience — than the more, dare I say it, prosaic (in relation to everything else, mind you) bread-and-butter issues that most can at least remember from their younger years, and perhaps even relate to in the present. And yet —

For all its specificity to a particular — and criminally, woefully under-represented — demographic, there is a touch of universality to The Pervert. The trans experience is unique, but being one fuck-up away from living on the street? Not so much. Questioning the point of existence? Even less so. Wondering what the future holds, and if you’ll even have one? Damn near commonplace. And maybe that’s the point — or one of them, at any rate. Not many works in this medium have been able to portray trans folks as having problems we can almost all relate to, but this one does — without in any way compromising or down-grading the singularly difficult-to-navigate terrain non-cis people have to navigate. That’s deft storytelling, to be sure, but it’s more than that — it’s authentic, at times even unbearably so.

And so we return to the creators themselves, because this is a comic that could only come from two trans talents. They’re going to come in for fair amount of praise for their work here — as well they should — but take a look at social media sometime. What you’ll see is a months-long campaign of harassment, undertaken well before this book even saw print, being enthusiastically promulgated  by transphobic “Comicsgate” assholes — most especially the juvenile, incoherent, bigoted, repulsive asshole Richard C. Meyer, better known by the supposedly-ironic handle of “Diversity & Comics” — that seems to have, as its endgame, the goal of driving both Perez and Boydell out of comics for no other reason than these permanent adolescents don’t think books like this should exist. Don’t think people like this should exist. That’s as fucked-up and wrong as it gets. The accolades The Pervert will be receiving are sure to drive these retrograde “alt-right” comics fans — who bizarrely feel that there are no longer enough ultraviolent, reactionary costumed vigilantes left on the LCS stands for them to jerk off to (as if Batman, The Punisher, Wolverine, Deathstroke, and too many others to mention don’t all still have monthly books) — absolutely apeshit, so when it comes to online harassment? Seriously. Please. If you see something, say something. To Image’s credit, they have been unwavering in their support of these (and, really, all of their) creators. We should follow their example. 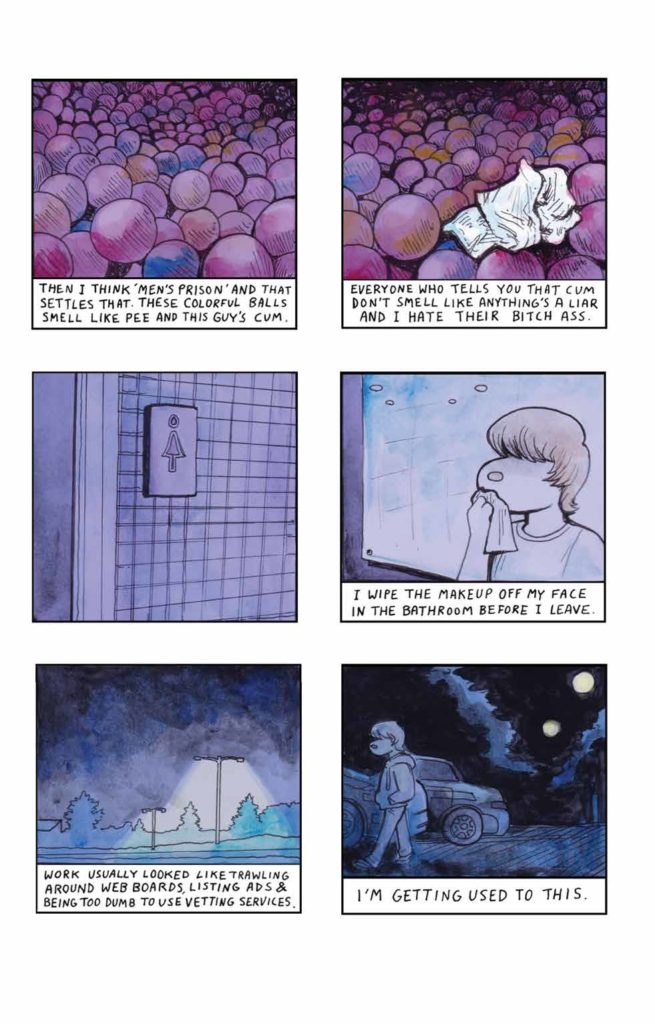 I have hope, though, that the positives will outweigh the negatives on the road ahead for Perez and Boydell — and, ironically, some of that hope comes from the pages of their book itself. It’s not all doom and gloom here, despite how it sounds, but this is a harrowingly effective portrayal of those too often blown off by supposedly “respectable” (read, culturally conservative) society, it confronts the comfortable with the inevitable by-product of their privilege and excess, and the issues that inform the daily lives of folks in Felina’s position are, by definition, “heavy” in the extreme — yet at the end, she’s able to see enough value in her continued presence on this planet to make a sound, sensible, life-changing decision. She’s willing to take a leap of faith in the hope that her future can be better than her past and her present. She refuses to give up even when, frankly, you couldn’t blame her for doing so. This is, then, ultimately a tale of survival against all odds — and that’s as welcome by the finish line as it was unexpected at the outset.

I should temper my enthusiasm a bit, I suppose, before we wrap up here — after all, it’s only April, and whether or not The Pervert stands as the best book of the year (a designation I am more than willing to bestow upon it without either hesitation or equivocation at this point) come December 31st is very much an open question. But honestly? I really can’t foresee any circumstances under which it won’t hold up as the most important one.