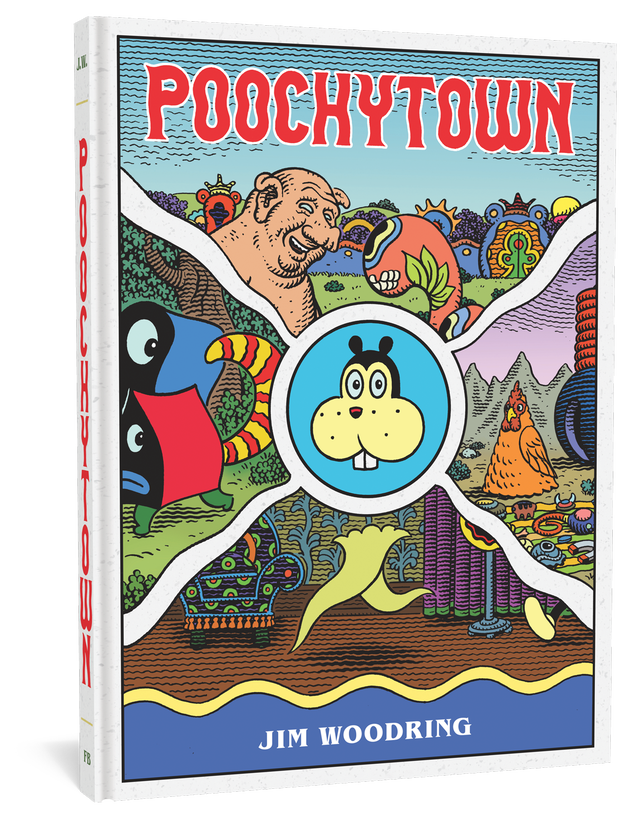 Here’s the thing: Jim Woodring’s been at it so long, and done it so well, that it’s almost easy to — dare I say it — take him for granted.

There’s really no reason that you (or I, or we) should, though — after all, the guy is basically a cartooning national treasure. Dating back to the (very) late-1980s debut of his first series, Jim, and continuing through Tantalizing Stories, Jim Vol. 2, Frank, and a number of subsequent graphic novels and occasional short strips set in his (and I use this term with precision) visionary world known as The Unifactor, he’s been making comics like no one else has ever made — hell, like no one else has probably ever thought of — for going on three decades now, and here’s another thing: his stuff seemed about 100 years ahead of anything that anybody else was doing back when he started — and it still does. 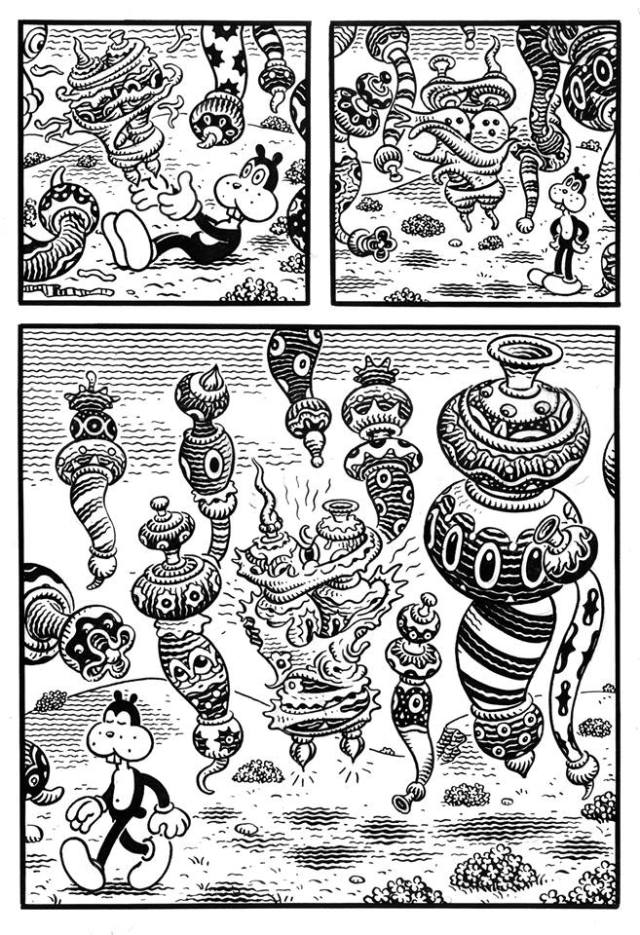 So, yeah, when a new Woodring book comes out, it’s still a big deal. Always has been, always will be. His latest (okay, fair enough, still forthcoming at the time of this writing) hardcover graphic novel, Poochytown, has been in the works for three years, and while it employs the same patterns, rhythms, and storytelling methodology of all the stories featuring his anthropomorphic quasi-stand-in protagonist, Frank, it achieves a fresh and compelling balance between the old and the new, the familiar and the unexpected, by taking his ever-wordless visual narrative into entirely unforeseen new directions by the time all is said and done that blow open the doors on a universe — okay, Unifactor — that really didn’t have any to begin with.

Carrying on the throughline that began with Congress Of The Animals and continued/re-started with Fran, this book, like its predecessors, can be viewed (and, crucially, enjoyed) either entirely on its own or as part of a larger whole, and I can only imagine the expressions on the faces of folks at the Fantagraphics offices as the pages of this one came in: You go into any Woodring work expecting that anything can and will happen, and yet somehow, the “anything” that does happen goes well beyond whatever you could have possibly (or even impossibly) expected, anticipated, or bargained for. He blows your mind on page one and then just takes it from there — to anywhere. 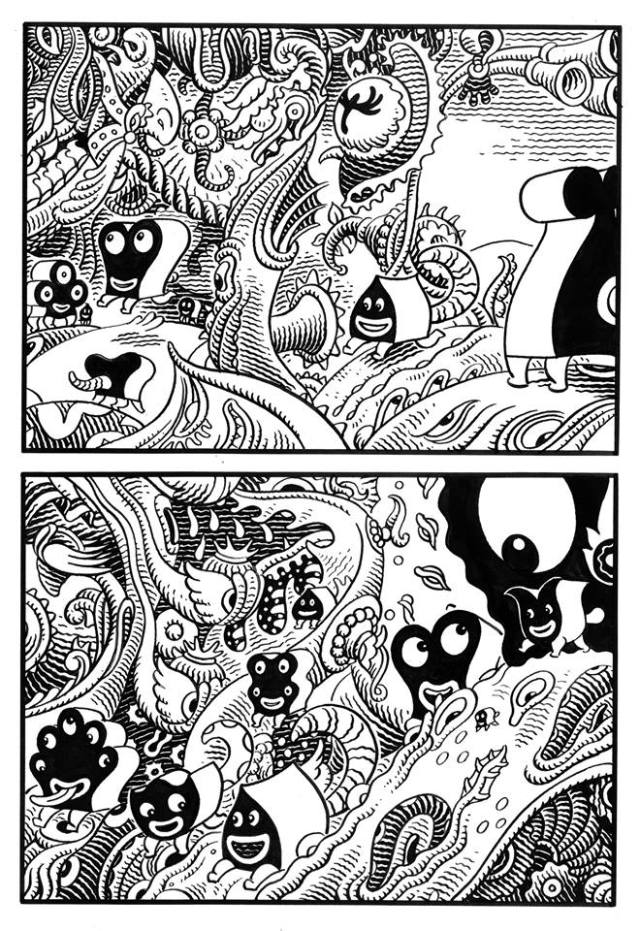 Frank, as is his custom, goes through some serious shit in this story — physical, emotional, and psychological peril being utterly par for the course, yet consistently foisted upon him in entirely inventive ways, the departure of friends/sidekicks/antagonists Pupshaw and Pushpaw for the debauchery and excess (or maybe it’s enlightenment?) of the titular Poochytown serving as the catalyst in this case for a suddenly-despondent Frank to strike up a new alliance/friendship that ultimately leads him to and through a succession of ever-more-harrowing trials and tribulations that eventually deposit him at the physical and mental outskirts of The Unifactor itself, a place where where the “bleeding edge” has bled out and where the “rules” that never applied in this wholly bizarre-yet-familiar world/dimension/what have you in the first place don’t even appear to exist. The end result? Well, that would be telling — so I won’t! — but suffice to say, whether you are a Woodring/Frank veteran or a first-time reader, you are in for one hell of a shock. 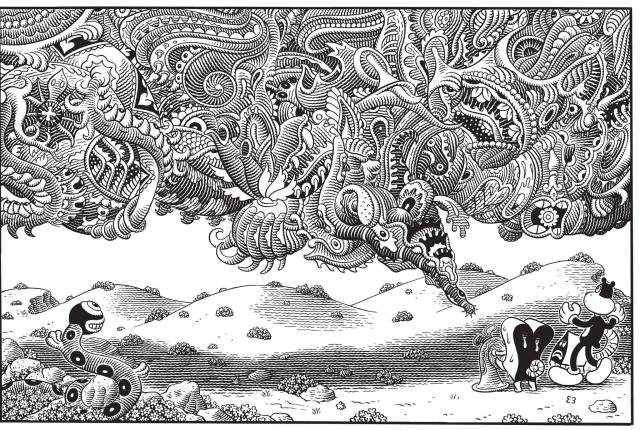 As always, the art in this book will knock your socks off. Post-psychedelic, fever-dream imaginings delineated with so much painstaking care and precision that it’s hard to believe one human being armed with nothing but pencils and brushes came up with them. Woodring’s double-page spreads offer the most to study and ogle over, positively awash with poetically-constructed, hyper-dense visual information that bypasses the rational mind and goes right for the id, but in truth there’s not a panel here you won’t feel the need to pore over for 10 or 20 minutes — maybe more. The lines and whorls and swirls and textures and I-don’t-even-know-what-the-fucks are taking Frank — and, consequently, his readers — somewhere darker and more potentially unforgiving this time, though, right (although not directly) into “things are never going to be the same” territory. And yet for all its added import and consequence, Poochytown is no less deliriously charming than previous Woodring works — so while a draining, harrowing phantasmagoria of inexplicable delights may sound like a contradiction in terms, I assure you it’s not. Besides, if you’re stuck in such old ways of thinking, this book doesn’t have time for you, anyway. Woodring is all about sweeping you up — and sweeping you away. And he’s never done it with more confidence, gusto, and sheer bravery than he does here.