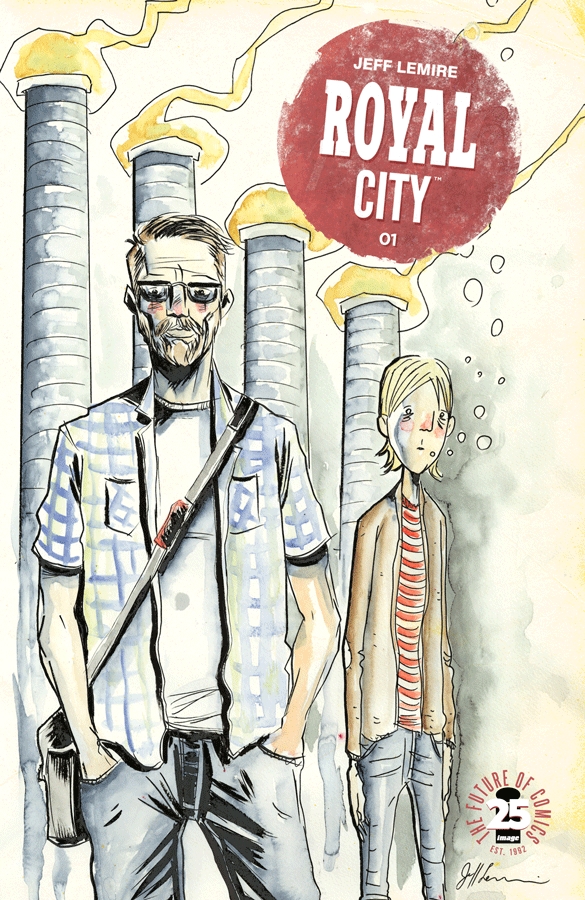 Once upon a time, Jeff Lemire was one of the most interesting up-and-coming cartoonists around. Essex County landed with a bang — rather surprising considering its slow-burn, quiet pace — and seemed to announce the arrival of a major new talent with a highly personal, idiosyncratic vision. His career seemed poised to take off, and take off it did — although perhaps not in the direction many (most?) of us expected.

Enter “The Big Two.” Lemire’s wistful, free-flowing art style was never going to be seen in a Superman or Spider-Man comic, to be sure, but his writing was another matter, and while for a time he was able to balance his more personal, nominally “independent” projects such as Sweet Tooth and Trillium with “corporate comics” like Animal Man, once he signed on with Marvel, he started writing damn near everything in sight — with decidedly mixed results. His take on Moon Knight, for instance, has been uniformly interesting (thanks in no small part to Greg Smallwood’s superb artwork), and Thanos seems off to a promising start, but the less said about his X-Men work, the better.

In recent months, however, there have been promising signs that Lemire is looking to get off the corporate treadmill, or to at least find more time for work he can pour his considerable soul into. His revisionist super-hero title with artist extraordinaire Dean Haspiel for Dark Horse, Black Hammer, is a tour-de-force of inspired creativity that pays homage to men-in-tights tropes while smartly deconstructing them in plain sight, and his lavish watercolor-tinged illustrations in A.D.: After Death, a collaboration with superstar writer Scott Snyder, are gorgeously evocative things to behold. It was probably only a matter of time, then,  before he assumed full writer-artist responsibilities on something near and dear to his heart, and last Wednesday that project arrived in the form of the over-sized first issue of Royal City, his new monthly ongoing from Image Comics. It’s time to let Lemire be Lemire again. 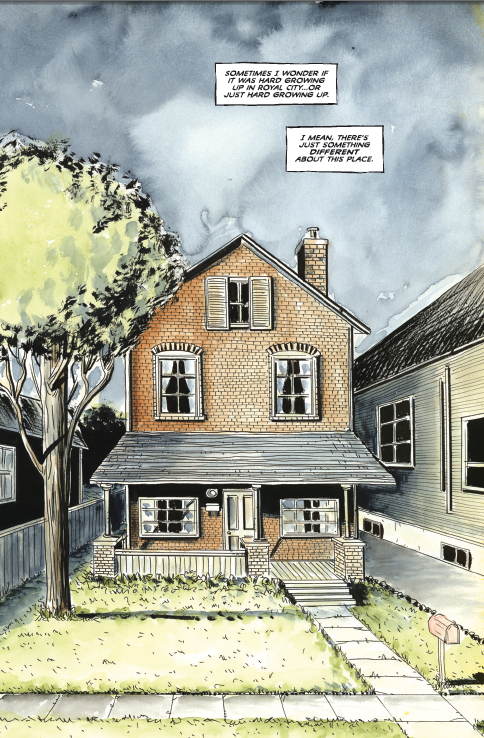 The watercolors are ported over from A.D. and Trillium for this one, but so are the more tightly-refined lines (comparatively speaking, mind you) of Essex County, making this something of a mix of the old and the new as far as the art goes, and the same appears to be true of the writing : the strong sense of place so integral to earlier works is here in spades, with the titular city immediately and fairly effortlessly establishing itself in our minds as a former industrial hub fallen on somewhat hard times, while the central characters, the Pike family, are experiencing something of a Twilight Zone-ish series of visions of their deceased son/brother at various stages in his life. Where that’s all headed no one knows, but Lemire’s explored the power of memory-tinged apparitions before in his graphic novel The Underwater Welder, and my best guess is that the long-form narrative structure of a proper series will be a more successful format to explore those themes than was that self-contained book, which missed its marks as often as it hit them, resulting in a decidedly “mixed bag” affair. Our various protagonists are fleshed out in broad and basic strokes here, it’s true, but that’s nonetheless effective as an exercise in small-scale “world building,” especially when this story is so obviously determined to be every bit as much about a place as it is the people who inhabit it. We see enough of everyone and everything to know all we need to know about them here, and you really can’t ask for a whole lot more from a first issue than that, can you? 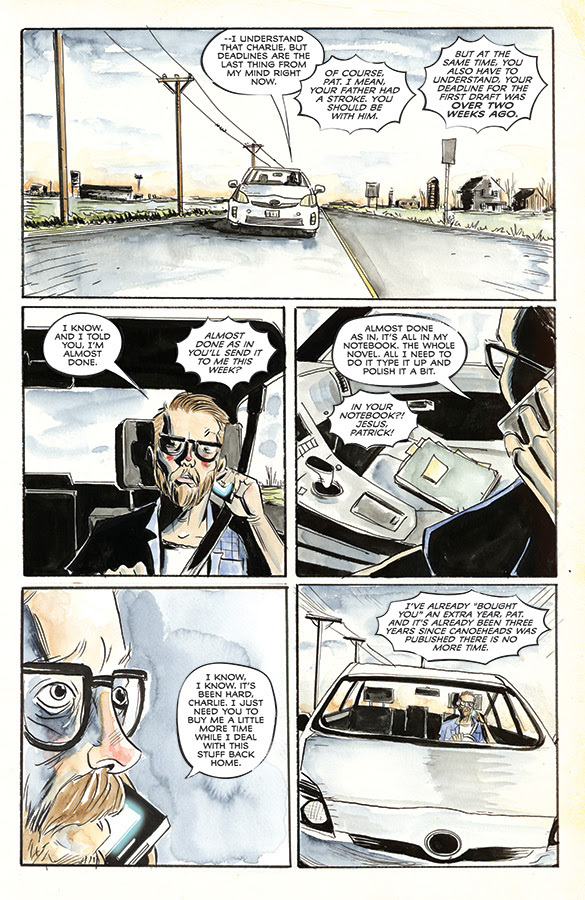 That being said, there’s also something missing here, and it was only on second read-through that it finally hit me what that was : while this is undoubtedly a very personal piece of work, the older and (hopefully) wiser Lemire seems, at least to this point, to be maintaining a certain clinical distance between himself and his characters, almost like he’s observing them rather than fully engaging with them. We’ll see if that continues to be the case as events (and issues) unfold, but for the time being, it’s definitely not what we’re used to from this creator. 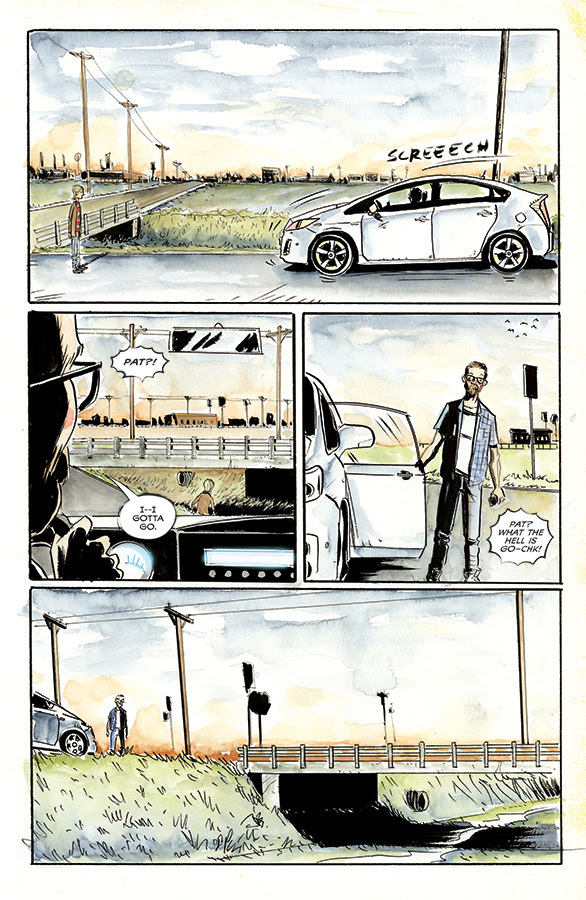 Still, who knows? Even if that does prove to be the tone going forward, maybe it’ll turn out to be a good thing. I certainly trust Lemire’s storytelling instincts enough to go wherever he’s leading us, and to let him guide us there in whatever manner he sees fit. This comic seems to be “item one” on Lemire’s still-quite-busy agenda, so chances are better than good that it’ll prove to be something quite special by the time all is said, drawn, and done. I was happy with, and intrigued by, my initial foray into Royal City, and I think that visiting it again every 30 days will prove to be a very rewarding experience, indeed.