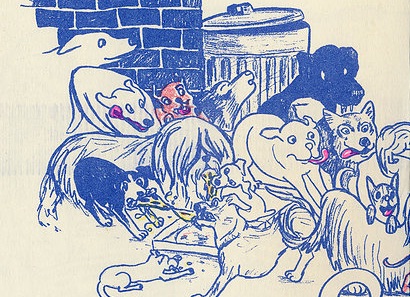 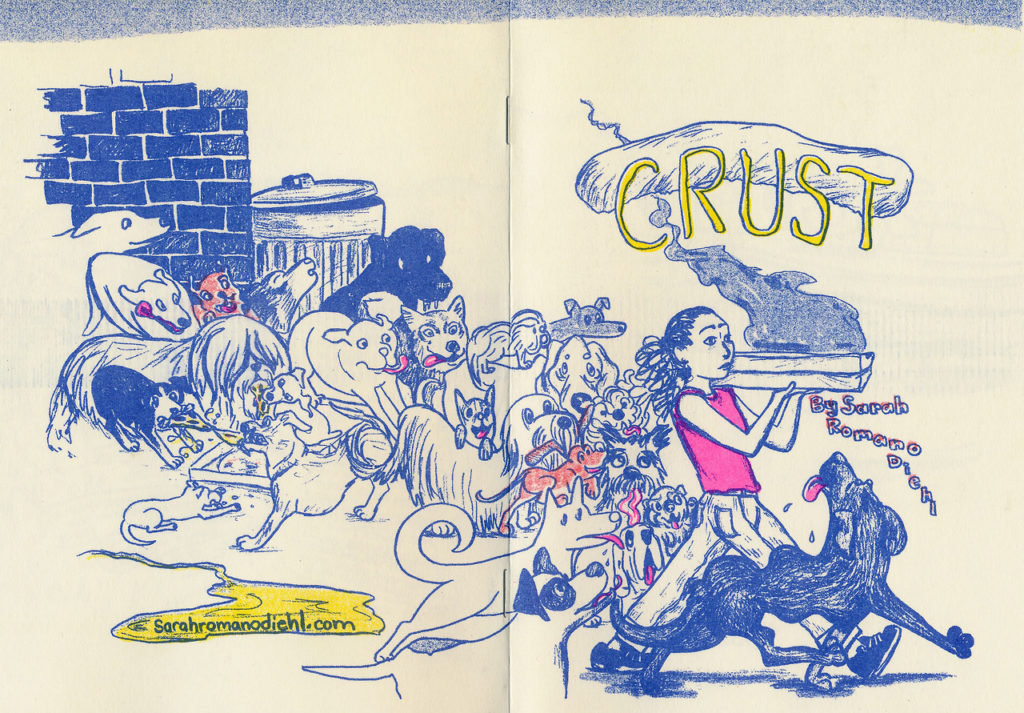 There are those who think that autobiographical comics are essentially over and done with, and in darker moments of my past I confess to having perhaps felt that way myself, but in recent years cartoonists such as Noah Van Sciver, November Garcia, Mimi Pond, and Max Clotfelter — to name just a few — have done much to re-invigorate a genre that, for many years, Gabrielle Bell and John Porcellino were essentially carrying on their shoulders after the ’90s autobio boom went bust. Now, I would suggest, it’s time to add the name of Sarah Romano Diehl to the list of the new wave of illustrators who have found that the most fertile creative ground to exercise their considerable storytelling “chops” on is to be found within their own lives.

The Seattle-based Diehl has done some interesting travelogue minis in her time, but with Crust, her new self-published memoir of her days as a pizza-delivery driver, she’s stepped up her game considerably. Like the previously-mentioned Pond, she’s “created” a stand-in character for herself (named Syd) to relate her tale of navigating her way through the culture within, and surrounding, a fast-and-loose workplace, but apart from that, similarities to anyone else’s work are few and far between, and she’s all about carving out a space uniquely her own. The innovative style on display in this book may be quiet and unassuming, but it’s nevertheless both very real and very refreshing. This may be the kind of story you’ve seen before, in a general sense, but I’d wager you’ve never seen it told in quite this manner. 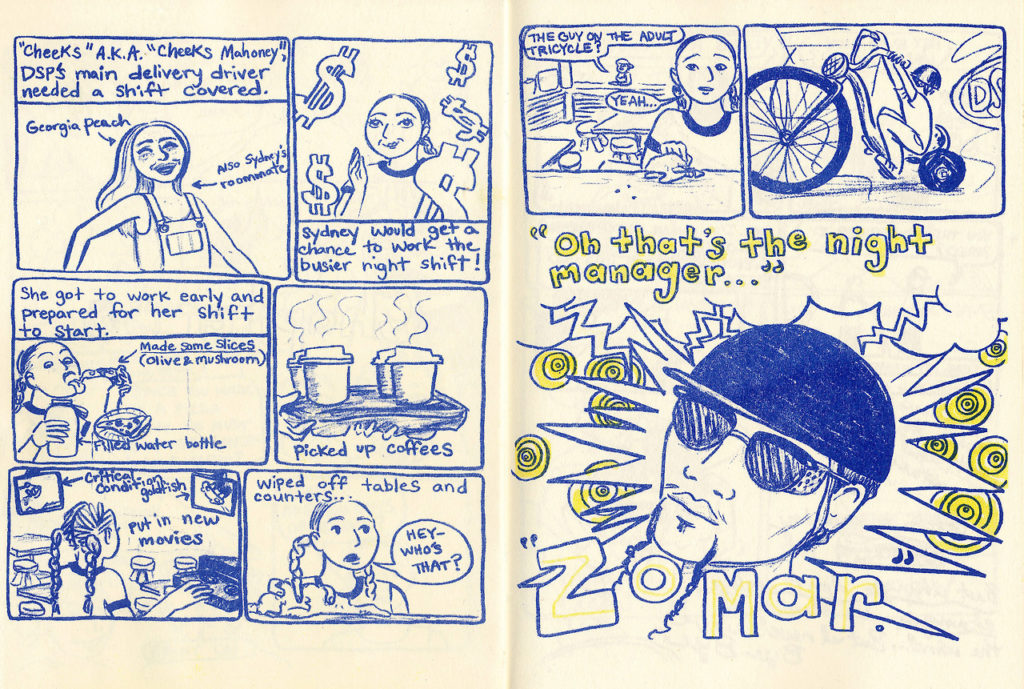 There’s a fluidity and warmth to Diehl’s art that balances the starry-eyed naivete of her alter ego with a keen observational sensibility, and although it’s gotta be said that this book contains nothing even remotely soul-baring, never mind salacious, the frank honesty of its tone is downright disarming nevertheless. Syd’s utterly enthralled by her new employers, and the earnestness with which she communicates that sense of wonder leaves readers feeling nearly as breathlessly awestruck as she is. We get to know just enough about Syd’s background as an Italian-American New York transplant living in a Colorado college town (Durango, to be specific) as we need in order to understand her “outsider” perspective, and from there on out we’re literally right there with her as she learns the ropes, familiarizes herself with a cast of unusual personalities, and barely skates out of some seriously dodgy delivery situations that understandably leave her rattled, relieved, pissed off, or some combination of all three. Anyone who’s ever worked a service industry gig can relate to much of this, but even if you haven’t, Diehl draws you in so quickly and so completely that you’ll “get it” regardless.

Sheer fluidity is probably this comic’s greatest strength, though, as Diehl’s strong-but-loose line illustration flows from one panel to the next in a damn near seamless manner, simple-but-effective facial expressions and body language communicating as much about her characters as her no-frills dialogue. At first glance the idea of a book that seems equally split between tight page grids and large, border-less drawings probably shouldn’t work, but this is real life — or at least a close enough approximation of it — that we’re talking about here, and seldom is there any actual “order” to be found in it, especially when a person is attempting to find their place in a new and entirely unfamiliar situation. You’re never quite sure where Diehl’s going next here — and that’s entirely as it should be given that she/Syd didn’t really seem to know at the time, either. 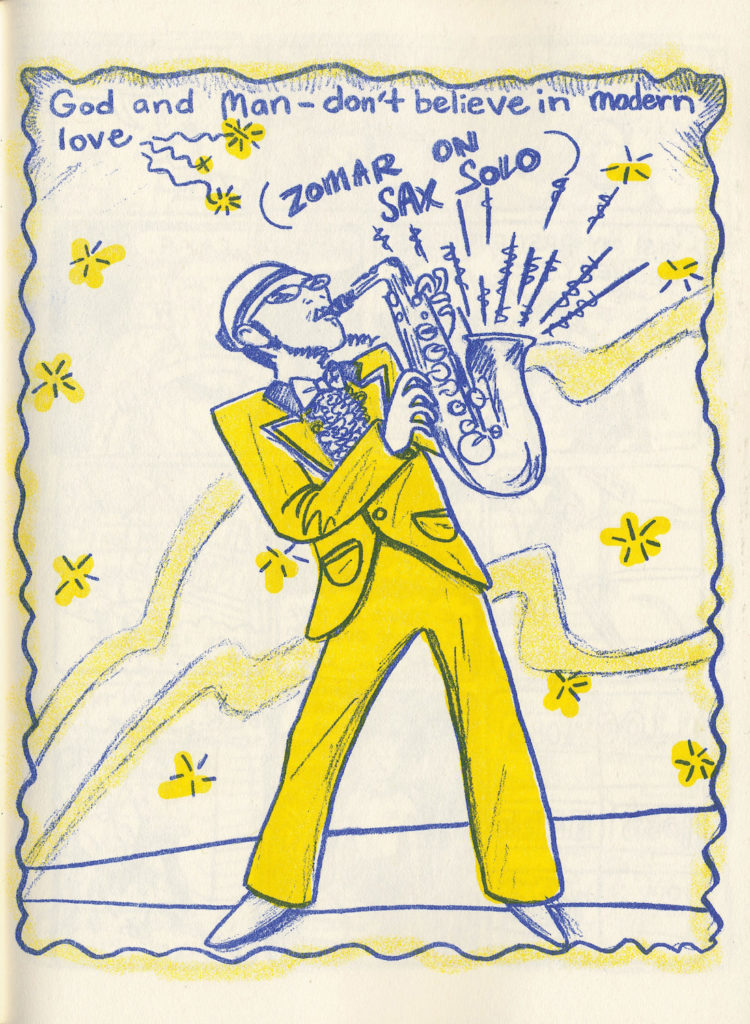 And yet, in much the same manner as the early filling-in of Syd’s backstory “sets up” her life to the precise the extent necessary for us to “get in the groove,” there’s also just enough visual grounding here to give us an understanding of the “world” we’re visiting/observing, as well. Diehl’s blue-and-white color scheme is shot through with bright yellows at imprecise, and therefore highly dramatic, intervals, and to say that she makes the most of the Risograph  is certainly under-selling the marriage of her artwork and the printing technique she utilizes. A touch of reddish-pink on the cover is the cherry on top of this comic, but it’s those expertly-employed yellows that are going to keep your eyes glued to the pages. 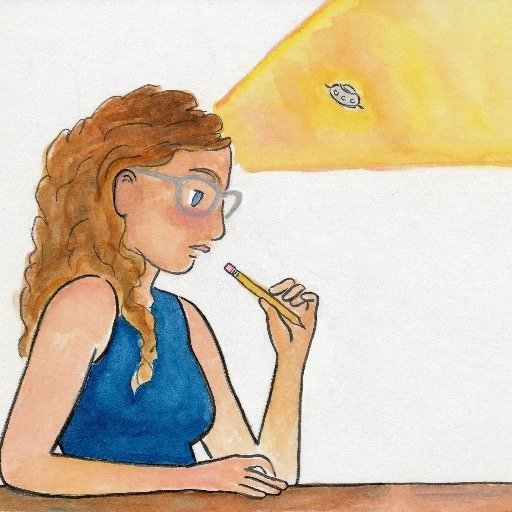 Quite likely the best thing about Crust, though, is simply the fact that it’s not over. Diehl is continuing her (own) story in subsequent installments, and hopes to put ’em all together into graphic novel format once all is said and done. You’d be wise not to wait for that, though, and to get in on the ground floor of this utterly charming and arresting (do those two things usually go together? Well, they do here) series right now by heading over to the artist’s Etsy shop at https://www.etsy.com/shop/FRESHTOWELS