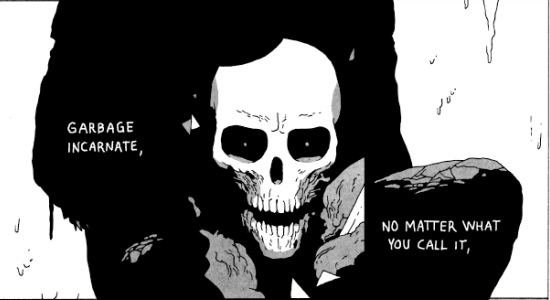 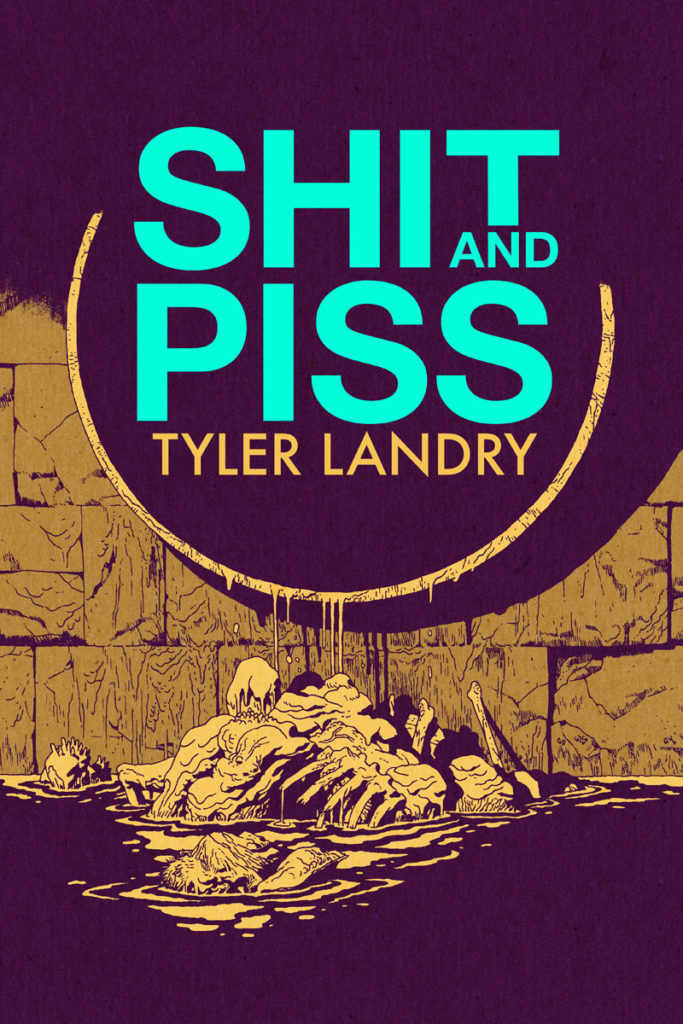 I’ve been up there, so I know: Prince Edward Island is a serene, pastoral place, largely dependent on agriculture and Anne Of Green Gables-based tourism for its economic survival. The pace of life is slow and seasonally-dictated; communities are so tightly-knit, and the families there go back so long, that you often hear remarkably different accents from one town to the next; cars travel at slow speeds along two-lane roads; crime is nearly non-existent. It’s like Vermont on steroids — yeah, sure, they’ve got high-speed internet now, but apart from that, life hasn’t changed a whole lot in the last, oh, hundred years or so.

Of course this is the sort of place that would produce a cartoonist with the most bleak, nihilistic, and uncompromising vision of the future committed to paper in recent memory. That’s just the way things work, isn’t it? That’s the natural way of things. Now hold that thought — it’ll come in handy later. 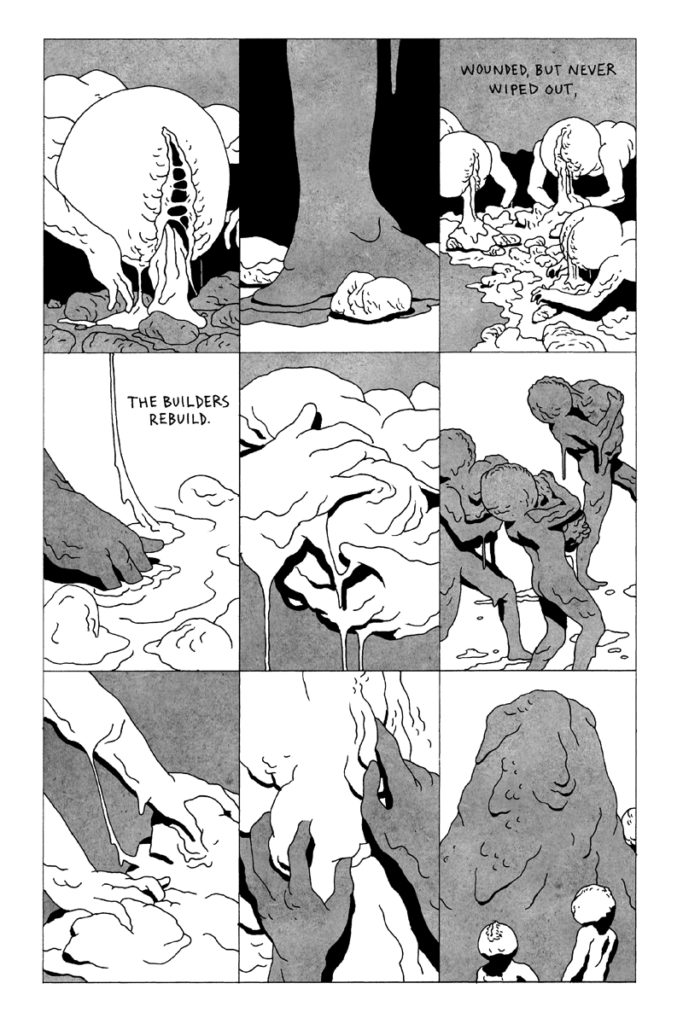 Tyler Landry doesn’t fuck around — he plunges you right into the shit, literally. Civilization is over, or will be soon, choked to death under a veritable mountain of its own waste, and the nameless protagonist of  Shit And Piss — his most recent graphic novel, a stark, 104-page B&W affair expunged from his consciousness and into the world by means of the Retrofit/Big Planet Comics co-publishing venture –is in a prime position to watch it all, being that he’s some sort of caretaker at a sewage treatment plant at (sorry, but) the ass-end of human history. The place has more personality than the man — it’s dungeon-like in appearance, walls seeping with exactly what you’d expect them to be, disgusting heaps of putrefying feces everywhere. Seriously, this environment stinks to look at — while our “hero,” for his part, is by and large portrayed as a near-featureless skull who oversees everything with a dispassionate eye that goes well beyond being merely “jaded.” He’s intelligent, to be sure — perhaps fiercely so — but he damn sure doesn’t care about anything or anyone.

The horror of this world (God, is “horror” even a strong enough word?) is communicated primarily by means of the nine-panel grid, and Landry expertly uses it to zoom in, around, onto any number of images we really don’t care to see — sometimes the panels flow together and serve as a composite background for some other equally-disturbing foreground illustration, more often than not they reveal differing angles of a scene oozing, festering into being. Some stories will be told — whether we like it or not. 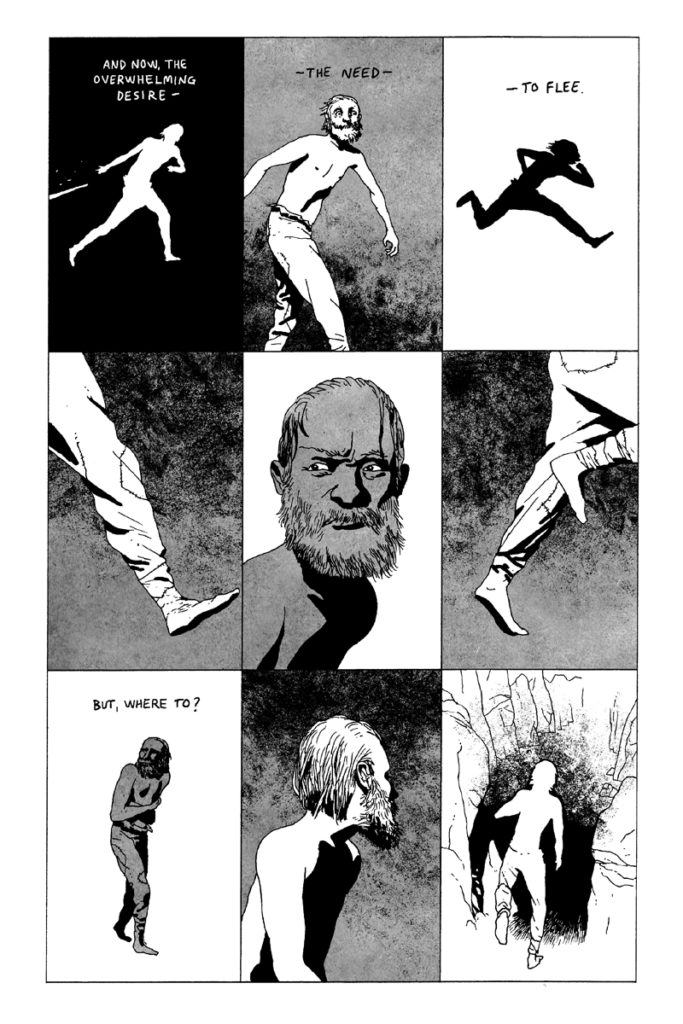 And yeah, that sort of  dark-side-of-the-organic aesthetic is reflected in the plot, a well, which is surprisingly easy to follow for a comic that’s weighted so heavily toward the visual. Simply put, life will find a way. Lie will always find a way. Much like the grotesqueries that managed to emerge within, and subsequently devolve to meet the requirements of, a near-impossible, even wrong, environment in Neil Marshall’s THE DESCENT, Landry’s uber-sewer becomes a giant petri dish for the development of a new, “throwback” form of life — specifically, a shit-golem with no urges apart from doing whatever is necessary for its heretical existence to continue. Problem is, there is already human refuse living amongst the — well, human refuse — and measures must be taken to increase the new life form’s numbers in order to meet the “threat” posed by the old. More of its kind will be needed so that the future can wipe the past that created it out of the way.

Things get really brutal really fast in this book and don’t really let up, so you’ve been warned — but it’s not just the visual brutality I’m talking about here. It’s the conceptual brutality, the thematic brutality. Landry strips away all pretense here and lays bare an ugly truth — who are we kidding, the ugly truth — that we all turn away from in fear and shame: this is a predatory existence, and when our back is against the wall, we have no choice but to not only accept, but to embrace that fact. The strong will survive, and those who have been too strong for too long will inevitably sow the seeds of their own destruction somewhere deep within the by-product of their own excess. It’s a done deal. It’s inescapable. It’s written in — well, maybe not stone, in this case, but you get the point. 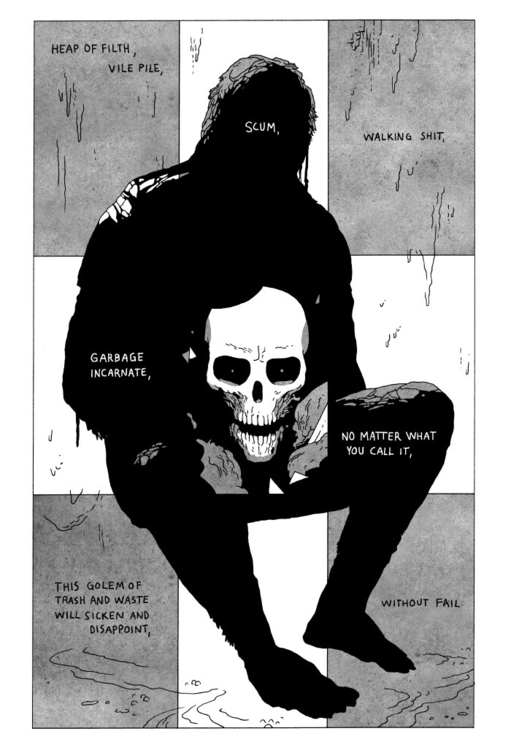 So, is there any hope? Come on — there never was. Nature is a cycle, and that cycle can’t/won’t be denied. We can bury it, we can brutalize it, we can crap all over it — and it will still be there, waiting to remind us who’s in charge. You can say “we are dust” all you want, and yeah it’s true, but Landry has a more honest and discomforting way of putting things — we ain’t shit.

Shit And Piss is not a book you’ll “enjoy,” but it’s certainly one you’ll never forget and will find yourself (despite your best efforts to resist) opening up again and again. You it directly from the publisher for $10.00 at http://retrofit.storenvy.com/products/19330015-shit-and-piss-by-tyler-landry