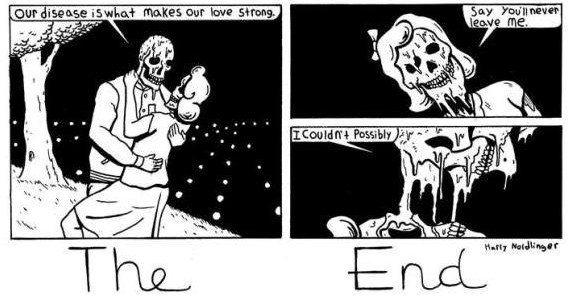 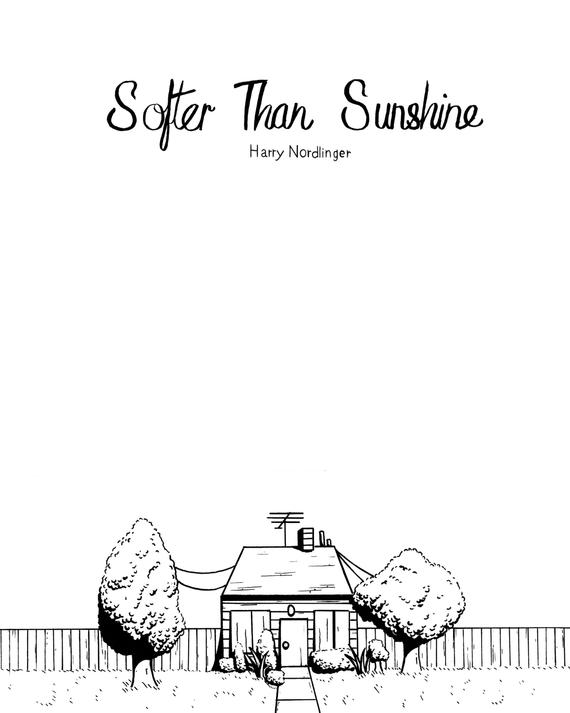 None of the strips in cartoonist Harry Nordlinger’s 2019 self-published “solo creator” horror anthology comic Softer Than Sunshine run more than four pages — hell, a good many of them are only a single page long — but that doesn’t mean they’re not worth contemplating. Absorbing. Soaking in. Examining your reactions to.

Yes, they’re punchy and precisely-timed by design, not unlike the classic EC horror tales of yesteryear, but they don’t  necessarily resort to tight-form narrative — or even narrative at all — to achieve their desired effect. “The kind of thing that crawls under your skin” is an overused term to be sure, but Nordlinger takes it a step further — or maybe that should be a step, or better yet an inch, deeper. These are horror shorts — some “tales,” sure, others more accurately described as scenarios — that burrow under your skin, that take hold and profligate, reproduce, in a manner that’s almost viral in nature. 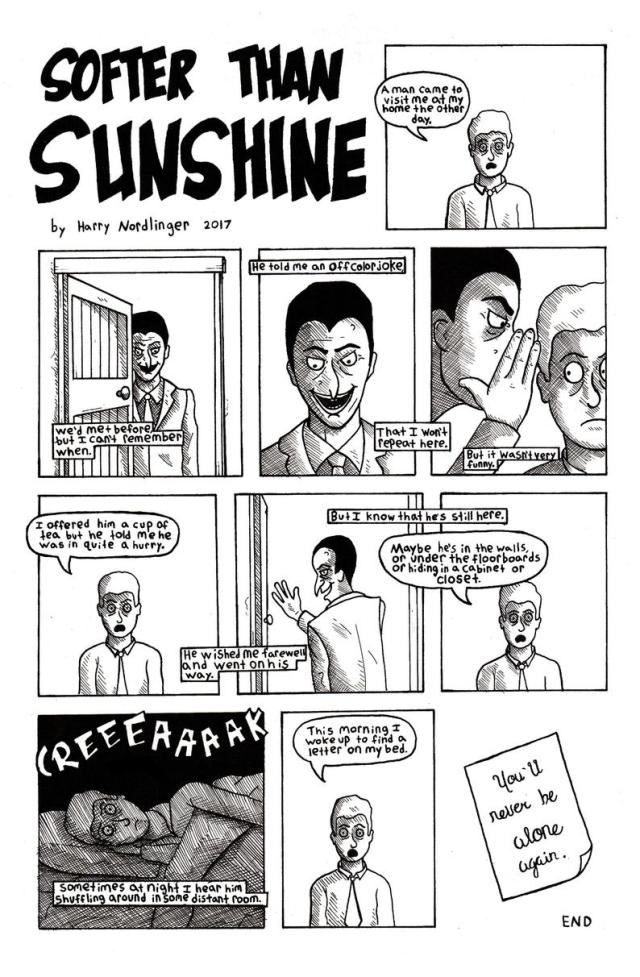 At their best — which they frequently are — they shine a dark light on the horrors that lurk under the surface of everyday life, playing on our deepest-rooted fears; those things that cause us unease not because they’re not really there, but because we know they are. Hell, maybe “horror” isn’t even the best term to describe what Nordlinger is creating here — maybe it would be more accurate to say that he’s tugging on the strings of our existential fears, and doing an expert job at it more often than not. He identifies and exploits the things that scare people in a general sense, yes — but he never forgets that, in doing so, he’s also scaring you, specifically.

Don’t, however, take this to mean that he doesn’t trade in the surreal when the occasion calls for it. These aren’t strips grounded in real events, after all, only in real fears and real unease, and sometimes to do that requires peeling away the scab of consensus “reality” to get at the pulsating, pustulating wound underneath. And while it would be easy enough to pop that with a needle, it requires a much more deft touch to put the needle right up to it, press gently, and hold it down until you can feel it throughout your body; throughout your mind. Oh yes, there’s a deliciousness to much of this terror — if you relish having your primal fears played upon, this is the comic for you. 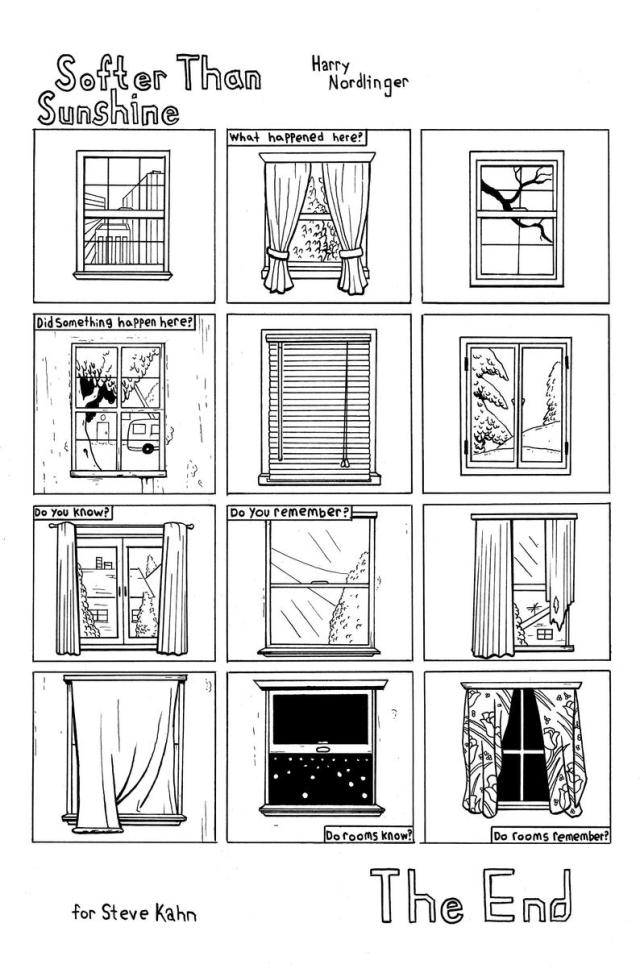 It’s also the comic for you if you just appreciate seeing an artist firing on all cylinders, creatively speaking. Nordlinger is nothing if not versatile, and while his clean linework is a subtle visual feast, he’s also not averse to cross-hatching like a motherfucker if that gets the job done, or to employ fairly basic shading techniques in unexpected, but always appropriate, ways. In point of fact, his art does a lot of the “heavy lifting” here, perfectly complementing his usually-sparse (sometimes even poetic) scripting by incorporating the bizarre and outlandish into the mundane without missing a beat, breaking a sweat, or upsetting the apple cart. The horrific elements aren’t over-rendered or shown as being “outside” or “other than” — they’re part and parcel of the world as we know it; the infernal underbelly that breaks to the surface only and precisely at the moment we can no longer deny its existence. 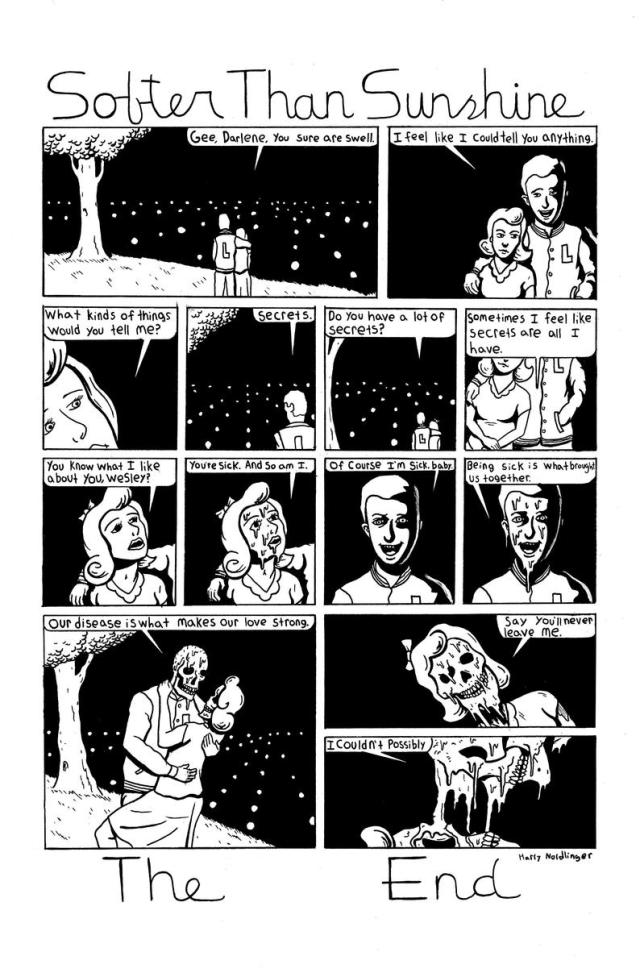 I’m not one to “root” for a project too overtly, but I freely admit that I hope Nordlinger finds success with this book and that more will be forthcoming. He knows just how to chill me to the core and I need more of that feeling ASAP; that’s just the sort of twisted son of a bitch I am.

Softer Than Sunshine is available for $6.00 from Austin English’s Domino Books distro at http://dominobooks.org/softersunshine.html