One of my favorite sub-sub-genres in film has to be “splatter films.” If you are not familiar with what constitutes a “splatter film,” let me break it down for you really quick: These movies usually have a ridiculous story, not much plot, and are so far outside of the mainstream that casual moviegoers don’t even know of their existence.

The 1980s was the heyday of underground splatter films. BAD TASTE (1987), BASKET CASE (1982), and THE STUFF (1985) are all great examples of this style of film. The one film that fully embodies this style of movie has got to be director James M. Muro’s 1987 filth opus and love letter to New York City, STREET TRASH. This film has it all: melting drunks, exploding bodies, severed penises, gore, exploitation, and humor.

My love for STREET TRASH is what makes me so excited to write about horror-centric clothing company CAVITY COLORS’ brand new STREET TRASH collection. When they announced they were rolling out a merch collection based on one of the most notorious splatter films in the history of outlaw cinema, I almost lost my shit, literally and figuratively. 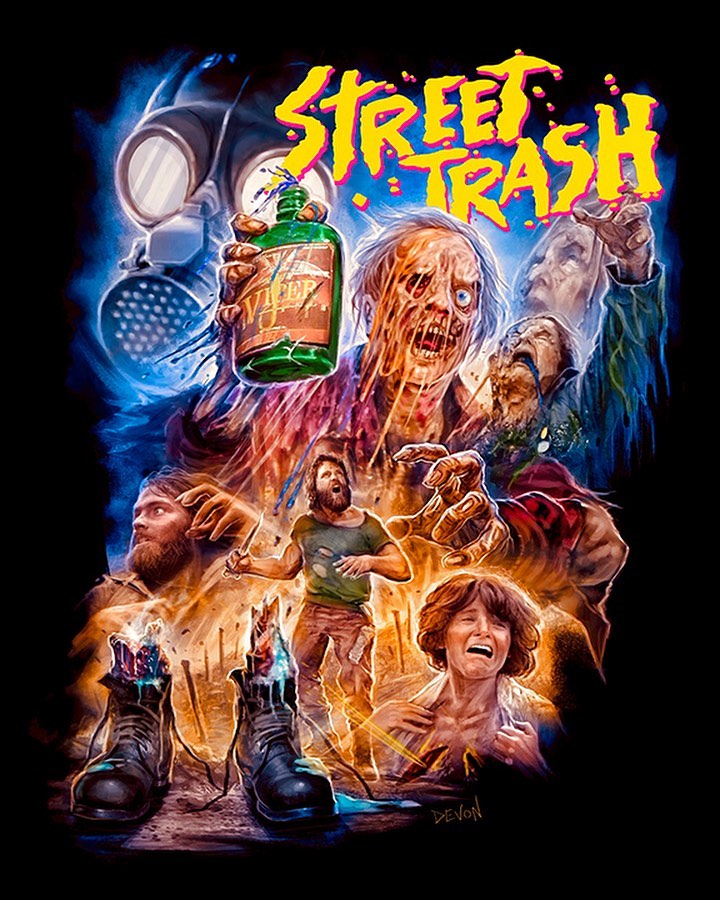 The bulk of CAVITY COLORS’ STREET TRASH collection features bright, vibrant artwork by Devon Whitehead depicting some of the more disturbing scenes of the movie. Devon is a longtime collaborator with CAVITY COLORS and is also well known for designing the cover art for many of Scream Factory’s releases, including their collector’s edition of THE GREEN INFERNO, TRICK ‘R TREAT, and NIGHT OF THE CREEPS, among many others. This artwork can be purchased on a black T-shirt, a tank-top, a lady’s slouchy tank top, and a raglan-style long-sleeve baseball shirt. 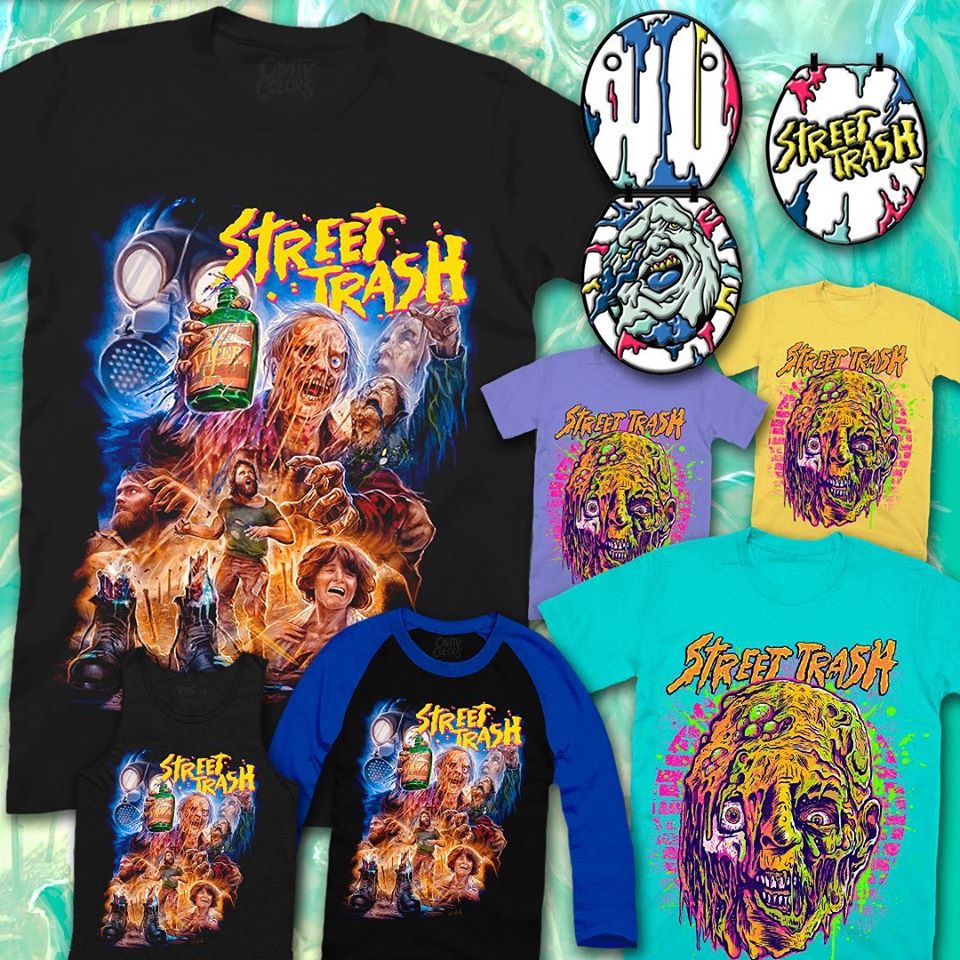 Then to capture the totally rad aesthetic of the 1980’s, CAVITY COLORS has also produced a mind melting neon blast to the senses with are by Dismay Designs. Dismay Designs are known for their off-beat and postmodern works that incorporate their love for all things punk rock and horror. There ooey gooey melting-face design is available on neon toxic yellow, turquoise, and purple T-shirts. 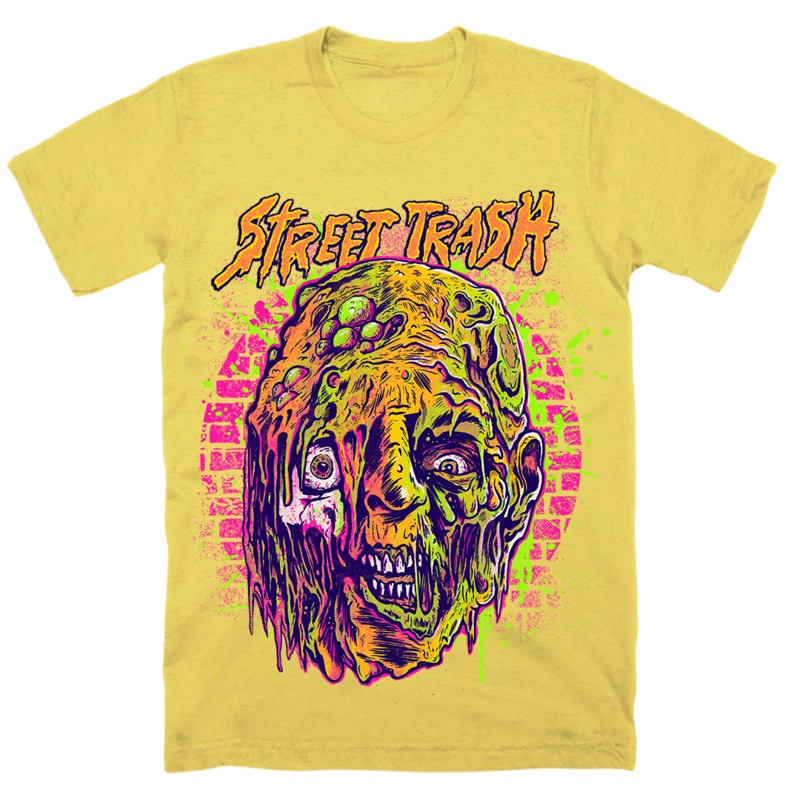 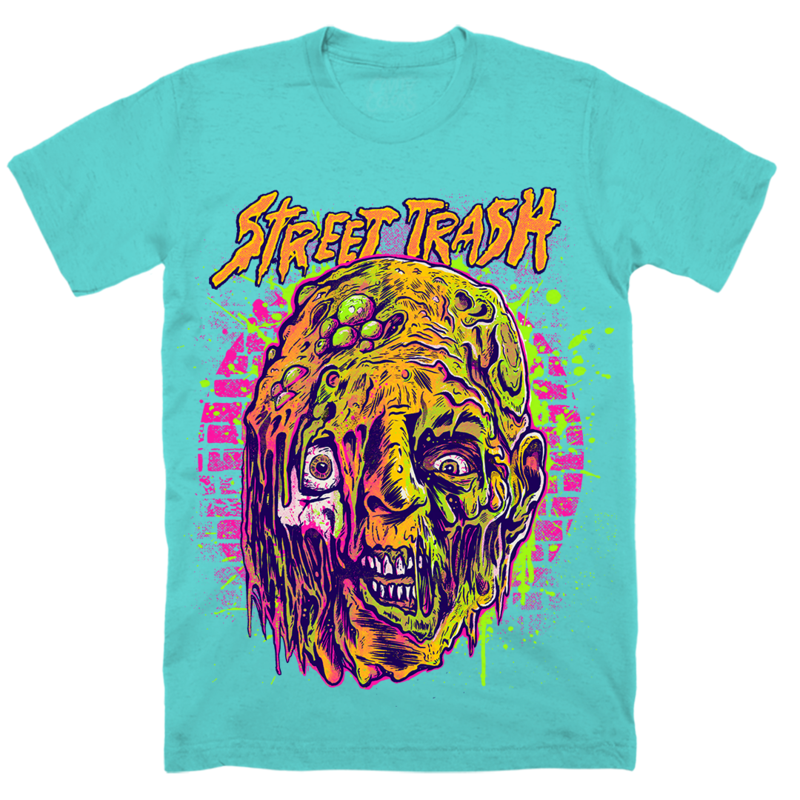 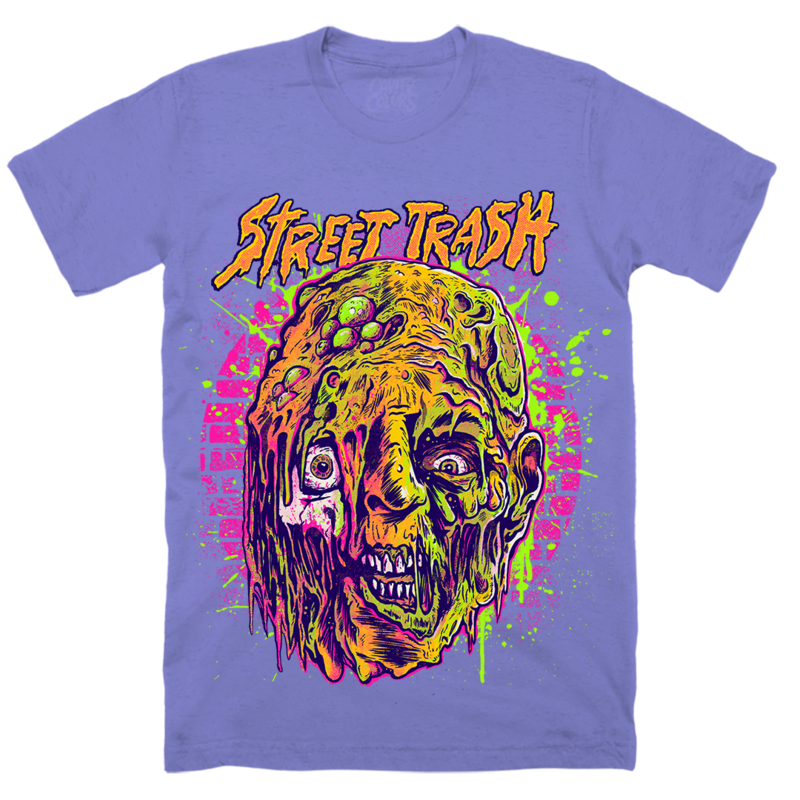 All of CAVITY COLORS merch is officially licensed. Their shirts are 100% ultra-soft cotton and tag less. If the shirts weren’t enough for you, they are also offering up a wicked awesome 1.6” tall enamel pin with hinge. This pin has a flip-open toilet lid that reveals a nasty surprise inside. It is also officially licensed, and comes with a double rubber clutch on the back for secure attachment. Art for this piece was created by Nacho Scratcho, and is a limited-edition piece.

Let the meltdown begin, drink down a bottle of Tenafly Viper, and celebrate the cult classic STREET TRASH. Check out CAVITY COLORS and their STREET TRASH collection. They are on all major social media outlets, or better yet, you can go to the main source, CavityColors.com. This is your old pal Germ the Ripper sayin’ “love fashion, hate fascism.” Tell em’ DAILY GRINDHOUSE sent ya, and always stay DRESSED TO KILL!