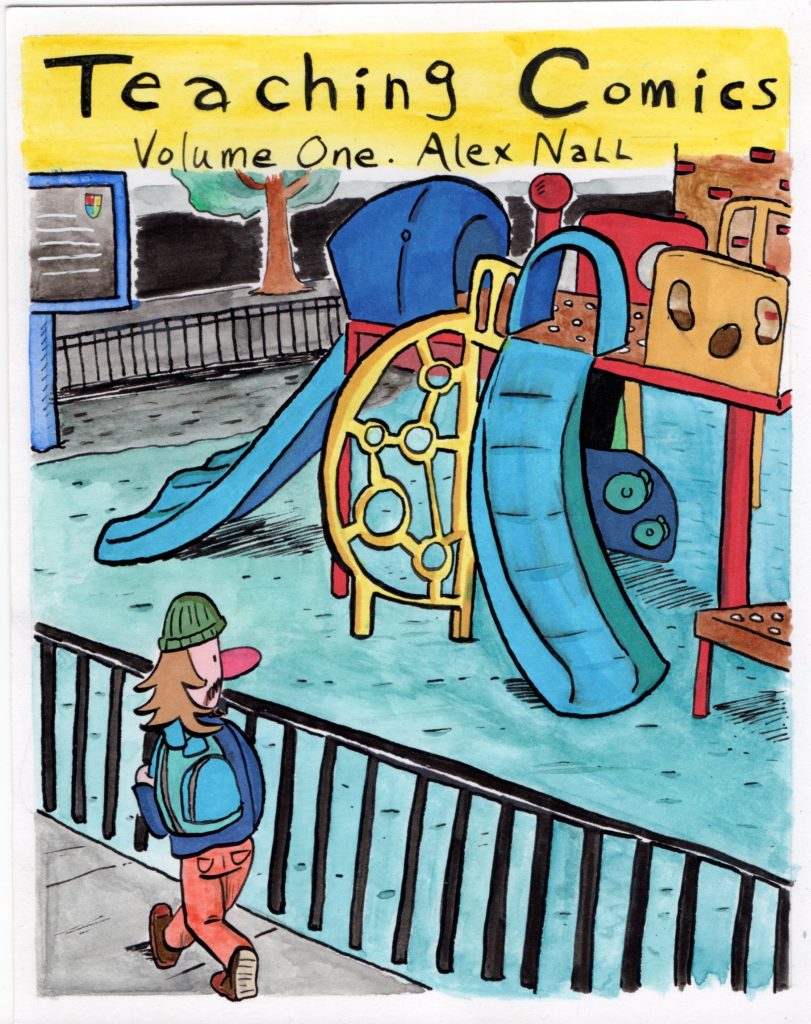 When no less an authority than legendary indie cartoonist John Porcellino says that a particular book is “as good as comics get,” then said book is clearly worth paying attention to — but also has some very big praise to live up to. Whether that means such a glowing endorsement is actually something of a double-edged I guess I’ll leave to you to determine — shit, if it was my book, I’d take it — but any way you slice it, “as good as comics get” is far more than simple, or even effusive, praise. Indeed, it’s positively glowing.

But, then, so is the book we’re talking about here, Chicago-based cartoonist Alex Nall’s self-published collection Teaching Comics: Volume One. Autobio strips that capture life’s quietly beautiful and poignant moments are nowhere near as “sexy” or “arresting” as autobio confessional stuff, it’s true, but for my money they take far more actual skill — anyone who can draw can give you way too much information about their masturbatory fantasies or their collegiate heartbreaks, after all, but it takes a supremely deft touch to communicate the simple wonder in the accidental wisdom of a child’s statement or the serenity and contentment that comes from walking home along a familiar route without coming off as being overly-precious or cloying. We all love perceptive cartooning (don’t we?), but most of us can do without smarmy sentimentality. 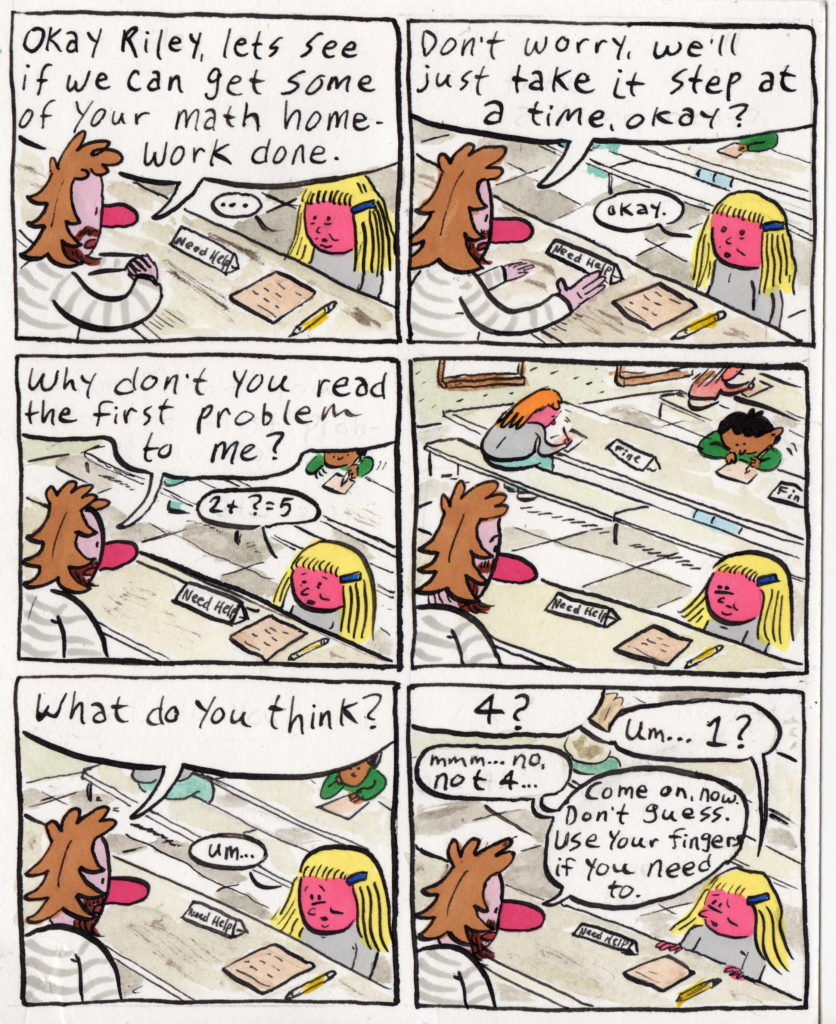 In Nall’s one-page strips he not only gets the balance exactly right, he does so consistently.  His stories about his experiences teaching in the Chicago public school system are charming, insightful, heartwarming, and at times even painfully funny, but never do they insult your intelligence or force their hand. His cartooning is as unassuming and free of pretense as his students, and I’m prepared to go out on a limb and say that takes more than talent, it takes at least a little bit of genius — and that’s a term I like to think I never use lightly. 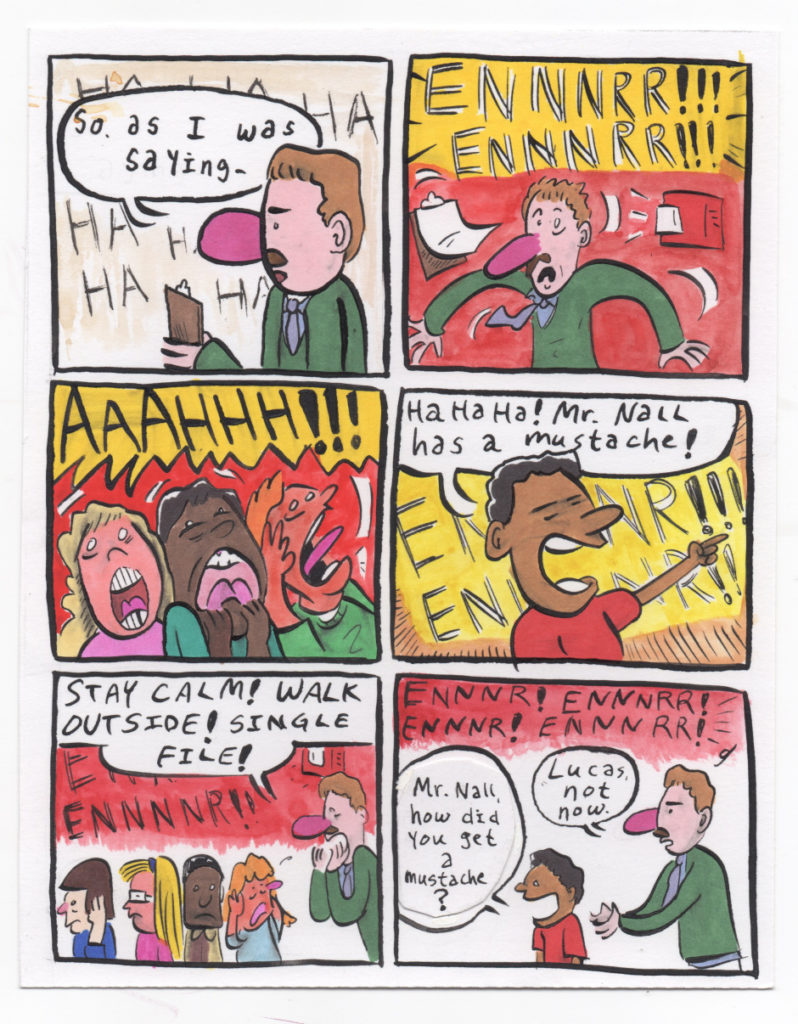 A good chunk of Nall’s artistic success here comes from the easy-going editorial viewpoint he takes throughout — he’s self-deprecating without being so to a fault, and the end result is a clear and honest look at the daily life of a guy who knows that he’s learning from the kids he interacts with every bit as much as he’s teaching them, and one that suffers from none of the “messiah complex” that sometimes accompanies those who take their responsibility to future generations maybe a little bit too seriously. Nall’s evocative and expressive linework — done in a wonderfully loose and fluid style by means of color markers (!) and ink — suits this “serious but not self-serious” tone to a proverbial “T,” and there’s none of the “disconnect” we sometimes see between subject matter and art that many autobio cartoonists struggle with to one degree or another. This stuff just plain flows.

The longer I go on here the more likely I am to run out of superlatives, so maybe I’ll just cut myself off in a rare display of critical discipline. I racked my brain to try to come up with some quibbles, no matter how small, in this work in order to balance things out at least a tad, but you know what? I’m coming up empty. Nall is a master craftsman and storyteller operating at the absolute peak of his abilities. As very near to a flawless book as you’re going to find — and further proof, as if any were really needed, that John Porcellino always knows what he’s talking about. 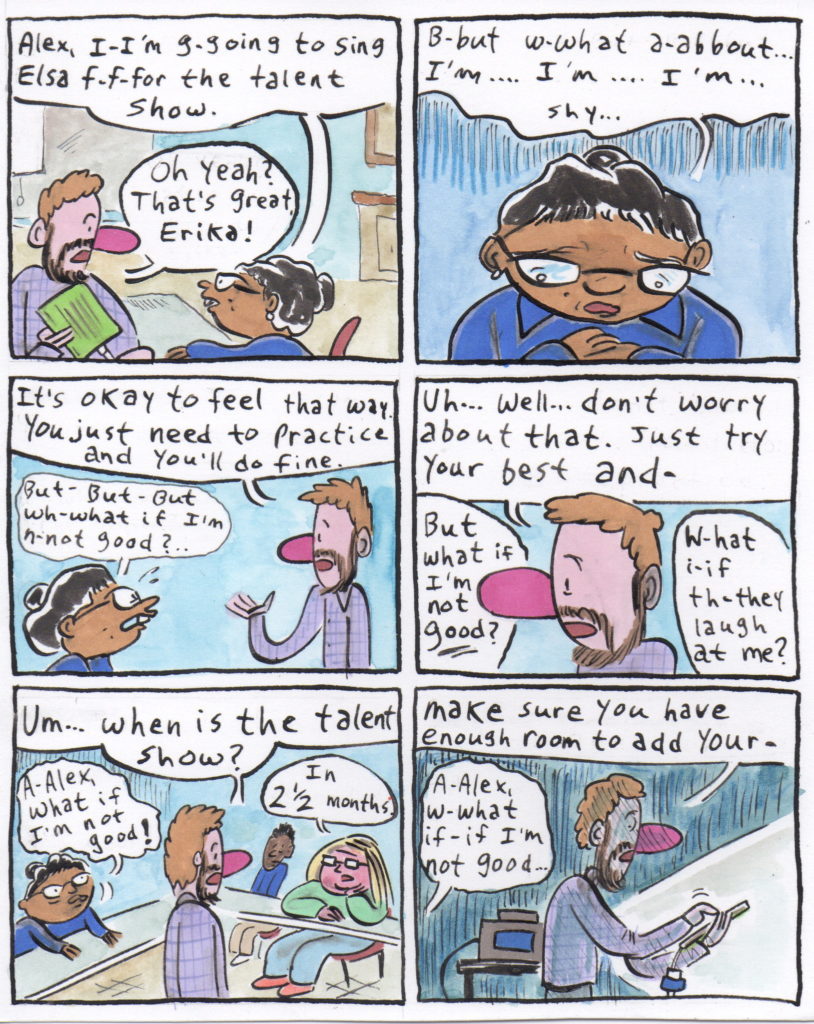 The very best thing you can do with that $20 bill in your wallet or pocket or purse right now is to order yourself a copy of Teaching Comics: Volume One directly from the artist at this site.