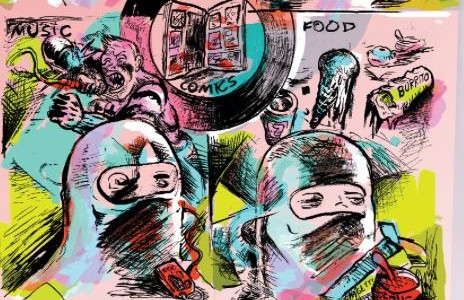 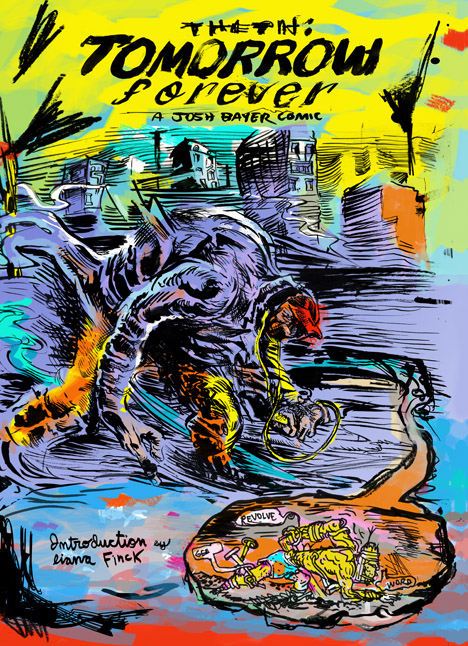 A tidal wave of memories real and imagined, meticulously haphazard (here we go with the contradictions) pencil, pen, and brush strokes, kaleidoscopic colors, steam-of-consciousness observations, mixed genre tropes, and weighty foreboding, Josh Bayer’s latest Tinto Press-published comic/”graphic novel,” Theth: Tomorrow Forever, may be a sequel to its shorter-titled 2014 predecessor literally and thematically, but it’s also very much a “stand-alone” work — and one that leaves a pretty damn indelible mark upon the reader, at that.

Most of us have been where protagonist/authorial stand-in (to one degree or another) Theth finds himself in Columbus, Ohio circa 1990: Twenty years old, at loose ends, burning to make a mark upon the world, unsure of what form that mark should — or even could — take, the future appearing equal parts formless void and open wound. It’s probably trickier for those with an artistic inclination to navigate this period in life than it is for others, I’d imagine — if you’re buckling down at your studies in hopes of being, I dunno, a lawyer or a dentist or something your path is pretty clear, after all. If you’re hoping to be a cartoonist or illustrator or poet or playwright, decidedly less so. Spoiler alert: Law or med school ain’t in Theth’s plans. 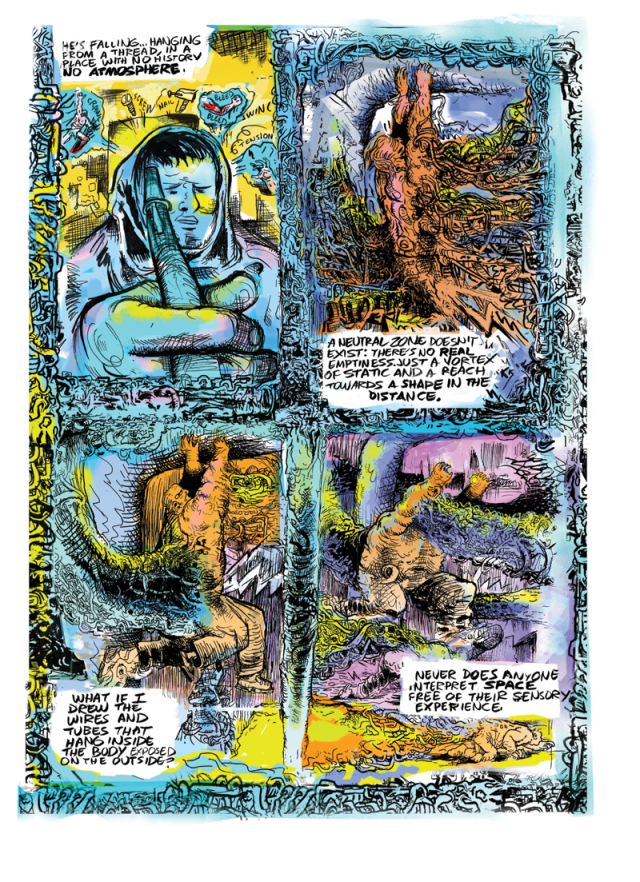 Meaning is there to be found wherever we look for it, the purveyors of received “wisdom” inform us, but tell that to a kid who’s hunting for it in every nook and cranny and coming up empty. How, then, does one invent it in the face of a random and uncaring universe that will continue to go on just fine, with or without your (or, hell, even my) presence? It’s a big question — maybe the big question — and one that philosophies, religions, and belief systems all seek to provide the answer to. If you’re of a mind — wisely, might I add — to reject all that in favor of something more unique to your own self, the metaphorical mountain you’re climbing invariably becomes more steep, it’s true, but on the plus side, when you’ve scaled it (or even made something akin to progress toward doing so), that’s a legit achievement. Maps are easy — cutting your own way through a dense fog of the unknown and the unknowable is some tough shit. 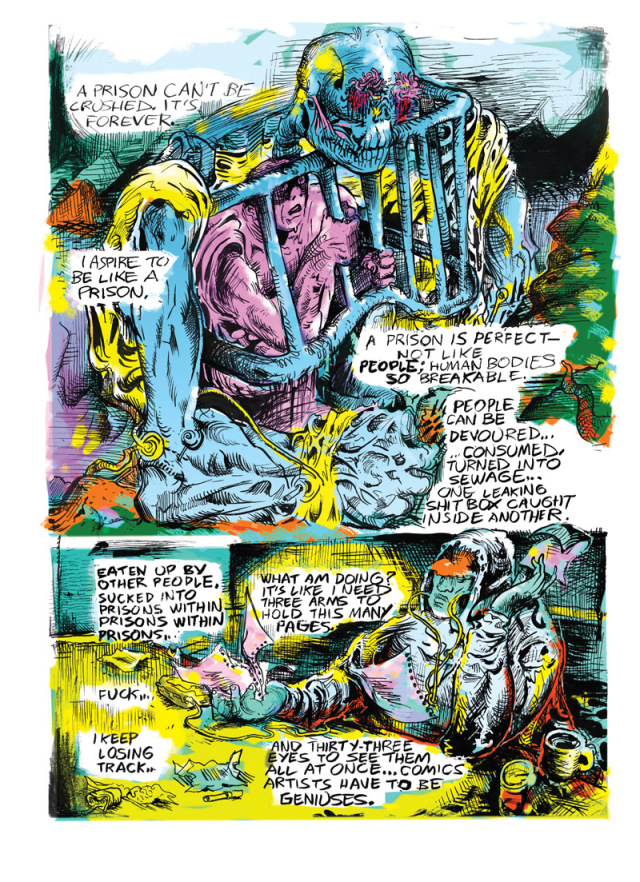 Which is probably why so many people opt for rulebooks, holy or academic or otherwise (well, that and fear of death). And while Theth doesn’t grapple with anything in a traditional manner, his internal — and, crucially, interalized — struggles are sure as shit near to universal as anyone else’s. Where we are, who we are, how the heck we got here — those are tricky wickets to wrap your head around even as you’re living, or have already lived, through them. But what we’re headed for doesn’t even offer the crutch of experiential knowledge to lean on; it’s all just out there, waiting. 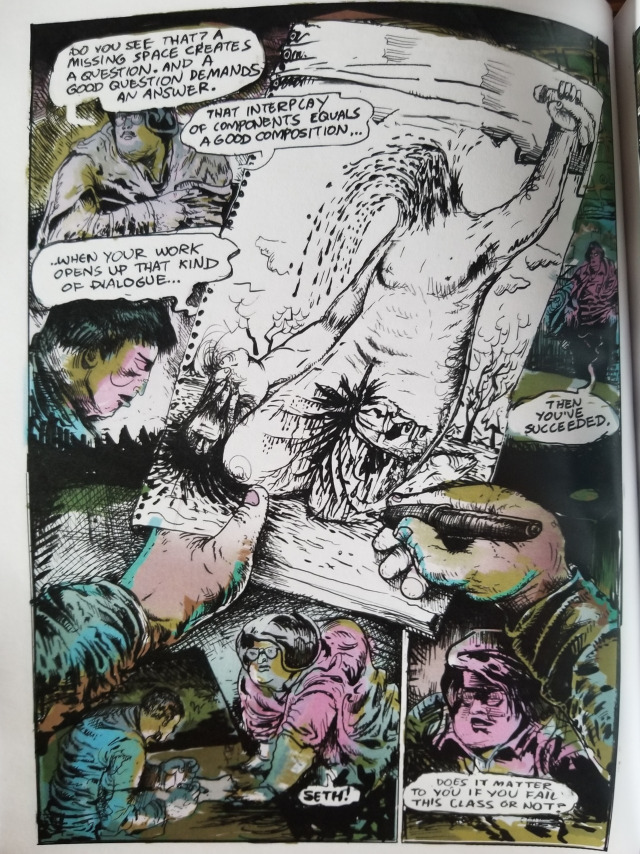 Fuck yes, this comic made me think. A lot. And while its structure is a thing unto itself, a phantasmagoric blend of the actual, the fantastic, and the actually fantastic, Bayer himself is so grounded as an artist that his story has no real need to be. He knows when and where to back off and let his readers intuit the parameters of what he’s putting on the page, and furthermore understands how the world of dreams and imagination necessarily informs day-to-day, consensus reality. A gap between the two always remains, of course — and maybe bridging that gap really is the project of a lifetime.

The word “visionary” gets tossed around far too freely these days, but it’s my contention that no matter how commercialized and cheapened a form the term has been forcibly devolved to fit, just about anyone can still recognize actual visionary work when they see it. Read it. Experience it. You’ll never question, from page one onward, whether or not Theth: Tomorrow Forever is such a work.

Liana Finck provides an introduction and a page of “pin-up” art, with more of the latter offered up courtesy of Sam Spina, Janelle Hessig, and Jeff Test, but this is Bayer’s show all the way — and while you’ve never seen anything quite like it, odds are pretty good that you’ve lived your own version of it, and may still be doing so now.

Theth : Tomorrow Forever is available for $25 directly from the cartoonist at https://joshbayer.storenvy.com/products/26476950-theth-tomorrow-forever